The view looking north on Fort Bridgman Road, toward the intersection of Pond Road in Vernon, probably sometime around 1907-1918. Image from author’s collection. 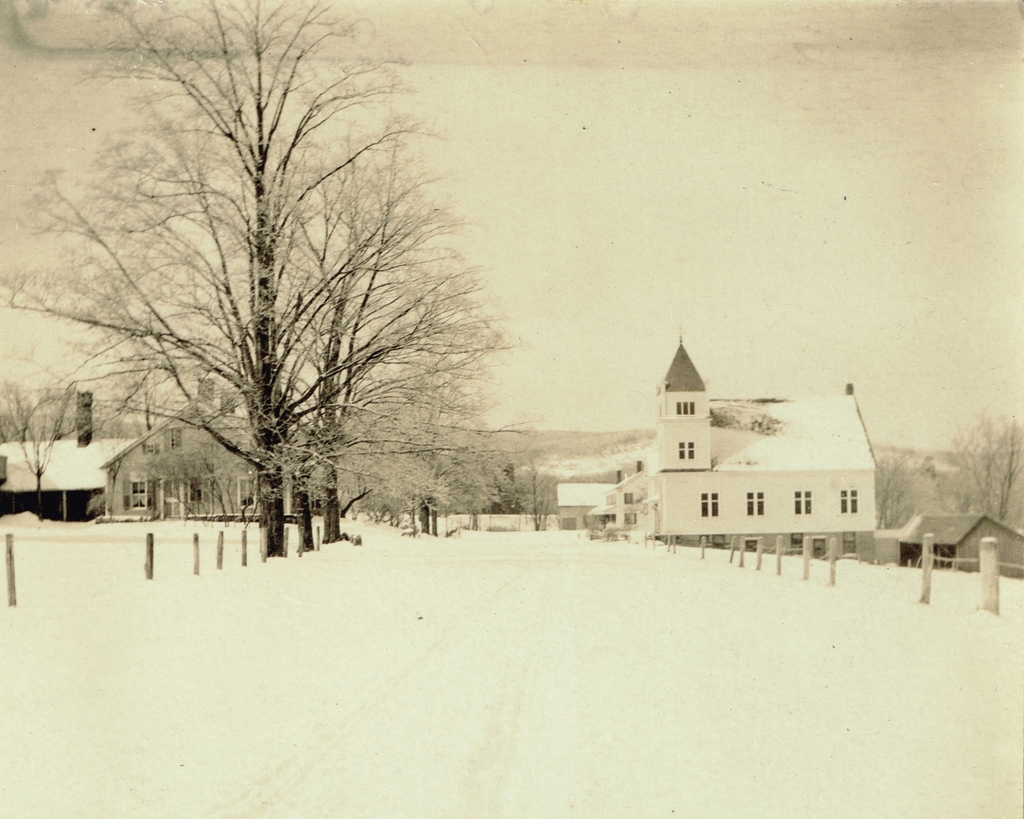 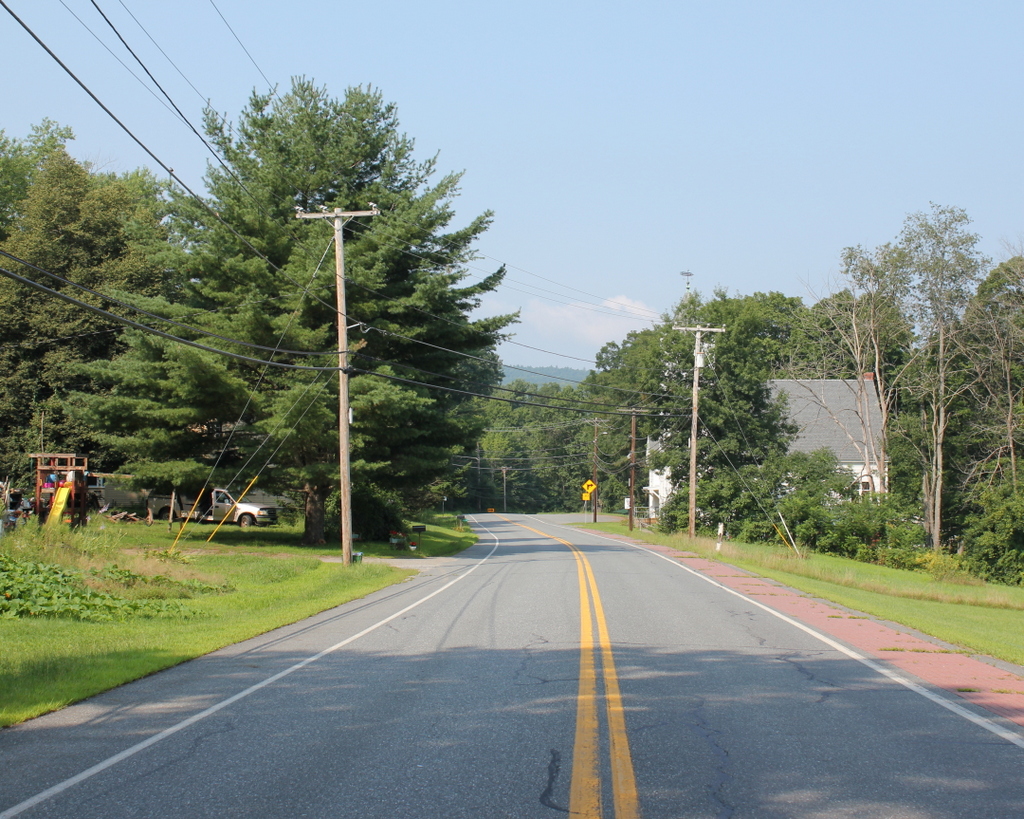 The town of Vernon is located in the extreme southeast corner of Vermont, and for much of its history it was small, with a population that consistently hovered around 600 to 800 people throughout the 19th and early 20th centuries. Most of this population was dispersed across 20 square miles, so Vernon never had a densely-settled town center, but the main village in town was here along Fort Bridgman Road, near the corner of Pond Road.

During the 19th century, this area was the commercial hub of the town, with an 1869 map showing a sawmill, blacksmith’s shop, carpenter’s shop, lumber yard, a church, and a building that was occupied by a store, post office, and hotel. There were also about a dozen houses clustered in the immediate vicinity, and the railroad passed through here along the Connecticut River, although the depot itself was located a little further to the north of here.

The first photo was taken at some point in the early 20th century, evidently soon after a snowstorm. It is a real photo postcard, meaning that it is a photograph that was developed directly onto postcard stock, instead of being mass-produced via printing. The photo is undated, but the markings on the reverse suggest that it was taken at some point between 1907 and 1918. On the reverse is a message written by a woman named Ethel Davis, who apparently also took the photo. It reads:

I thought you probably would like to hear from me as I am up in Vt. with a friend. This is not a very good picture as we take them our selves. It is quite lonsome up here. This is Main St Vernon, Vt.

There is lots of snow up here. I am not very lonsome. But do wish I were home. From your niece Ethel Davis.

The photo shows the view looking north toward the town center, with the Connecticut River just out of view on the far right, and the railroad on an embankment to the left. The most visible building in this scene is the Vernon Union Church, on the right side of the road. It was completed in 1900, and it replaced an earlier one on the same site, which had burned after being struck by lightning a year earlier. Beyond the church is a building that appears to have been the store/post office/hotel from the 1869 map, and on the left side of the road is a house that probably dates to the first half of the 19th century. It appears on the 1869 map as well, when it was listed as the home of Mrs. R. S. Bryant.

In more than a century since the first photo was taken, Vernon has undergone some major changes, the most significant of which was the Vermont Yankee nuclear power plant, which operated in the town from 1972 until 2014. Thanks in part to the resulting jobs and low taxes, Vernon saw rapid population growth in the late 20th century. By the 2010 census, the town had more than 2,200 residents, which was nearly four times its population when the first photo was taken.

However, despite this growth, the town center here along Fort Bridgman Road has remained small. Many of the old buildings are gone, including the mixed-use building beyond the church, which is now the site of the town garage. The church is still here, though, as is the house on the other side of the road. Both are hidden by trees in the present-day view, but they have seen few exterior changes since the first photo was taken, and the church remains in use as an active congregation. 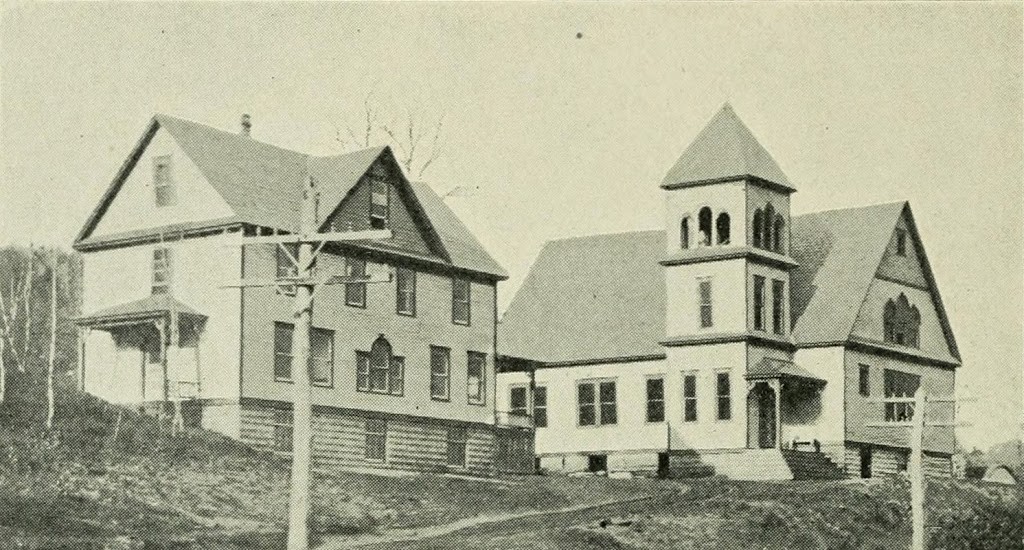 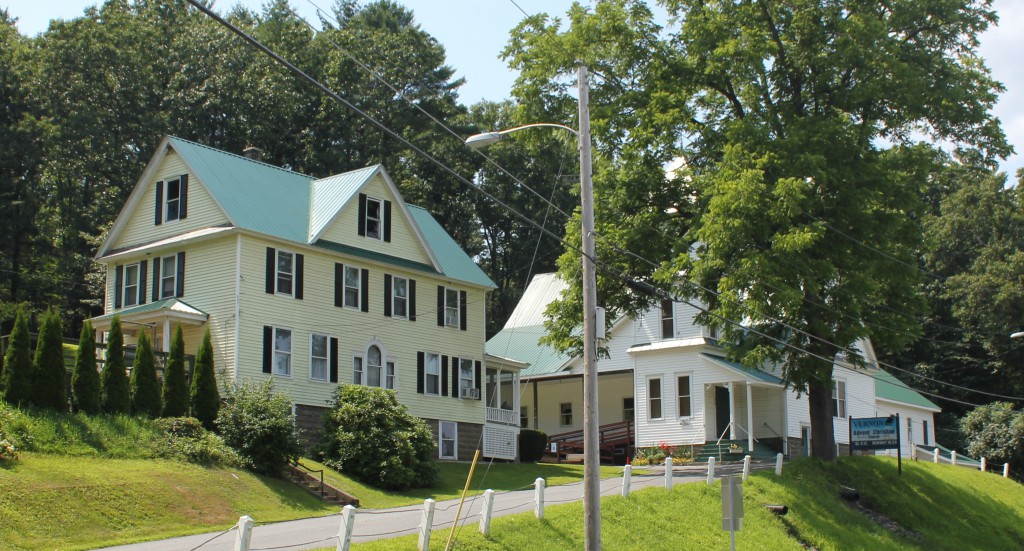