The Old Post Office, at the corner of Pennsylvania Avenue and 12th Street NW in Washington, DC, around 1909-1923. Image courtesy of the Library of Congress, Detroit Publishing Company Collection. 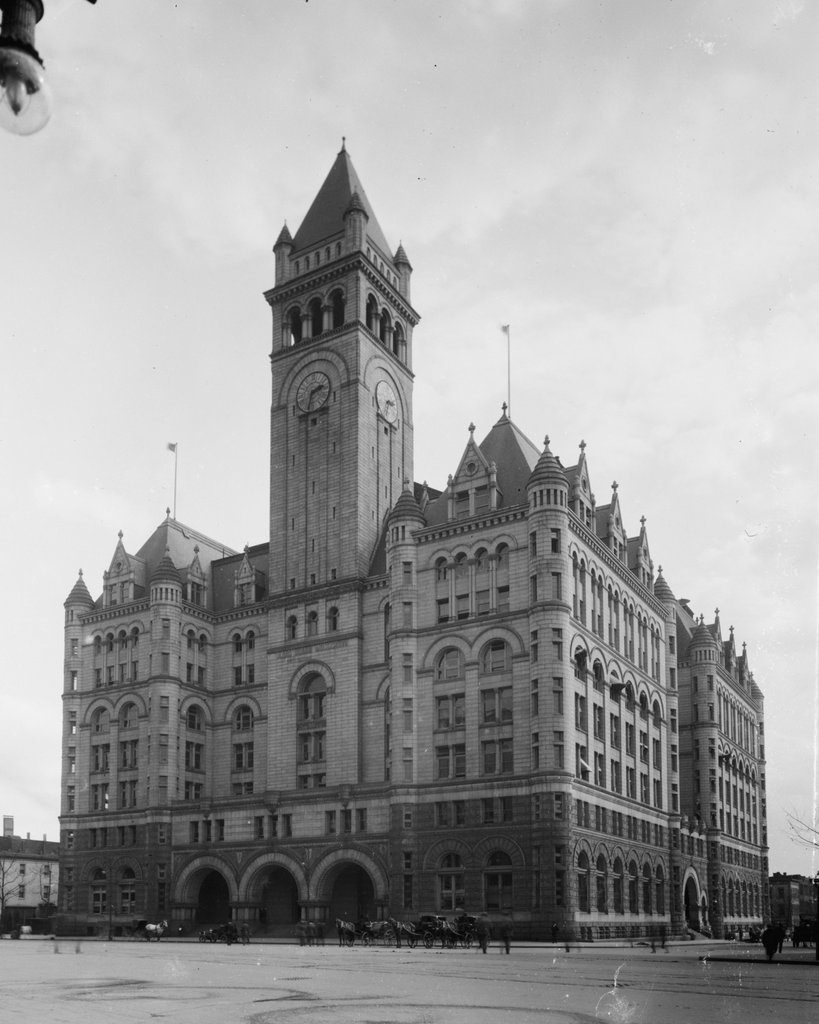 The building in 2018, now the Trump International Hotel: 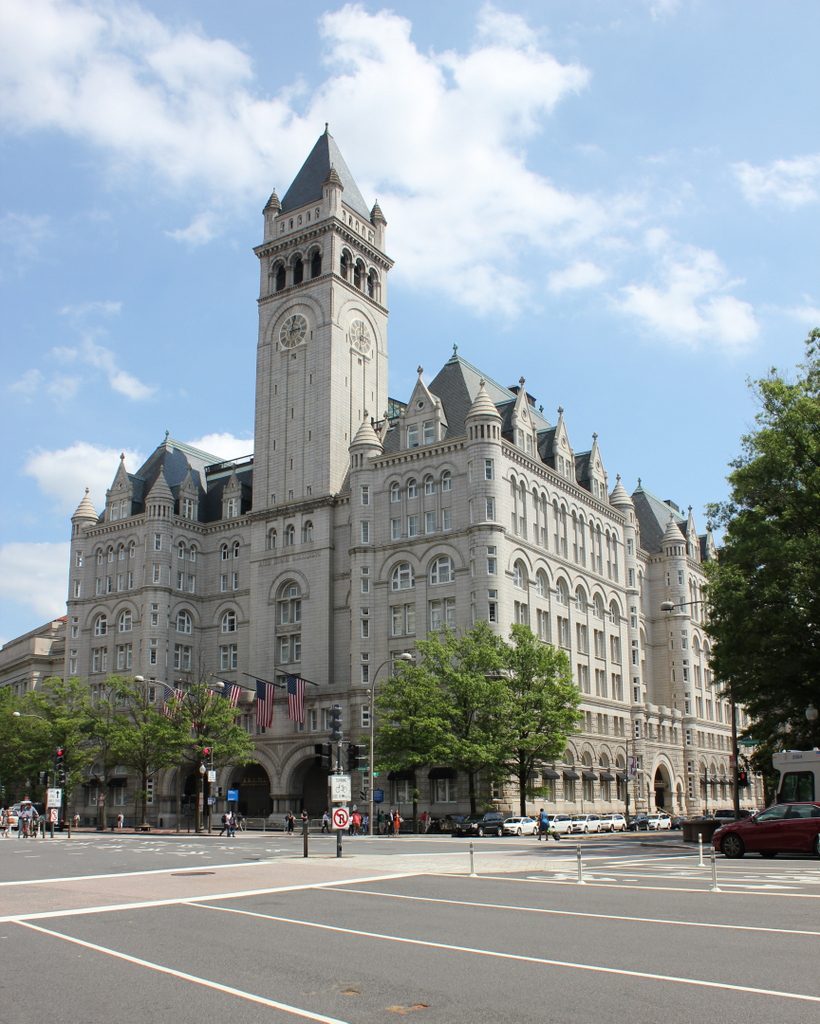 This massive Romanesque-style building was constructed between 1892 and 1899, and it was built to house the Washington, D.C. post office. It was the work of architect Willoughby J. Edbrooke, and it consisted of a granite exterior with a steel frame supporting the interior. Its northern facade, seen here facing Pennsylvania Avenue, had a symmetrical design that included a 315-foot clock tower, which made it the second-tallest structure in the city after the Washington Monument.

Although Romanesque-style architecture had been popular for public buildings in the 1880s, it had begun to fall out of fashion in the 1890s. By the time the post office was completed in 1899, architectural trends had shifted away from these medieval castle-like buildings, and its design was essentially obsolete even before the last stone was laid. As a result, the building’s architecture drew heavy criticism, but this was not the only problem with the building. Despite the building’s size, the post office facilities quickly became overcrowded, and much of the workmanship proved to be of poor quality. This was highlighted by an early tragedy that occurred on September 30, 1899, when former postmaster James P. Willett was killed after falling 90 feet down an open elevator shaft that had been insufficiently secured.

As it turned out, the Post Office would only use this building for 15 years before relocating to a new facility near Union Station in 1914. The older building became offices for other government agencies, but by the late 1920s it was in danger of being demolished as part of the Federal Triangle redevelopment project. This plan called for the wholesale demolition of the buildings in the blocks bounded by Pennsylvania Avenue to the north, Constitution Avenue to the south, and 15th Street to the west. They were to be replaced by new federal office buildings, and the plan originally included the demolition of the Old Post Office, which stood in the midst of the site. However, the Old Post Office ultimately survived – perhaps because of the perceived folly of tearing down a comparatively new building – and it remained in use as newer federal buildings rose up around it in the 1930s.

The Old Post Office was again threatened by demolition in the late 1960s and early 1970s, but local preservation activists managed to save the building. It was subsequently leased to a private company, which completed a major renovation project in 1983. The former government office building became a mix of retail and office tenants, but the property was never particularly profitable, and it finally closed by the early 2000s.

The building has since undergone another renovation, though, in order to convert it into a hotel. In 2013, the General Services Administration leased the property to Donald Trump, and three years later it reopened as the Trump International Hotel Washington DC. Although he was not yet a presidential candidate when he signed the 60-year lease, Trump’s ownership of the hotel has become a source of controversy. These include conflict of interest concerns over a government official benefiting from a government lease, along with questions about whether it is a violation of the emoluments clause if foreign dignitaries stay at the hotel.

Overall, the Old Post Office has generated many different kinds of controversy in the 120 years since its completion. However, despite criticism of its architecture and workmanship, proposals for various redevelopment projects, and recent questions about presidential ethics, the building has remained a landmark here on Pennsylvania Avenue. The interior has seen many changes over the years, but the exterior has remained remarkably well-preserved since the first photo was taken. Along with the other surrounding buildings, it is now a contributing property in the Pennsylvania Avenue National Historic Site, which was designated in 1965, encompassing the section of Washington between the Capitol and the White House.