The view looking northwest through Crawford Notch in the White Mountains of New Hampshire, around 1860-1875. Image courtesy of the New York Public Library. 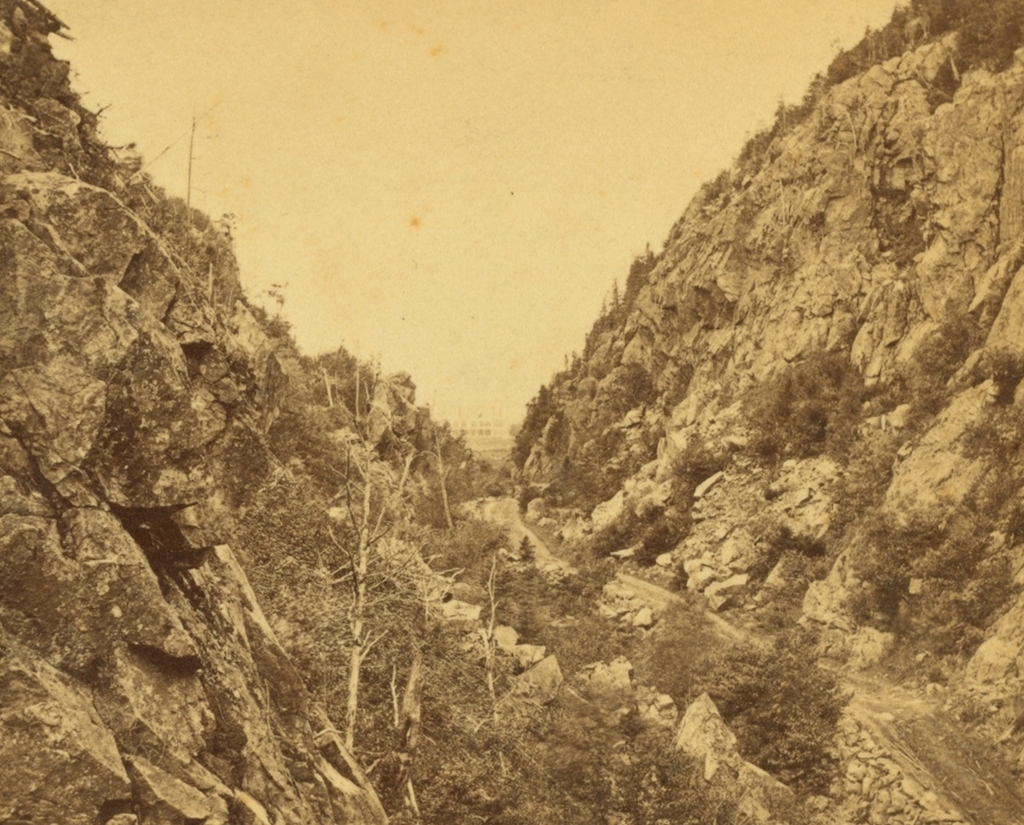 The same view around 1907. Image courtesy of the Library of Congress, Detroit Publishing Company Collection. 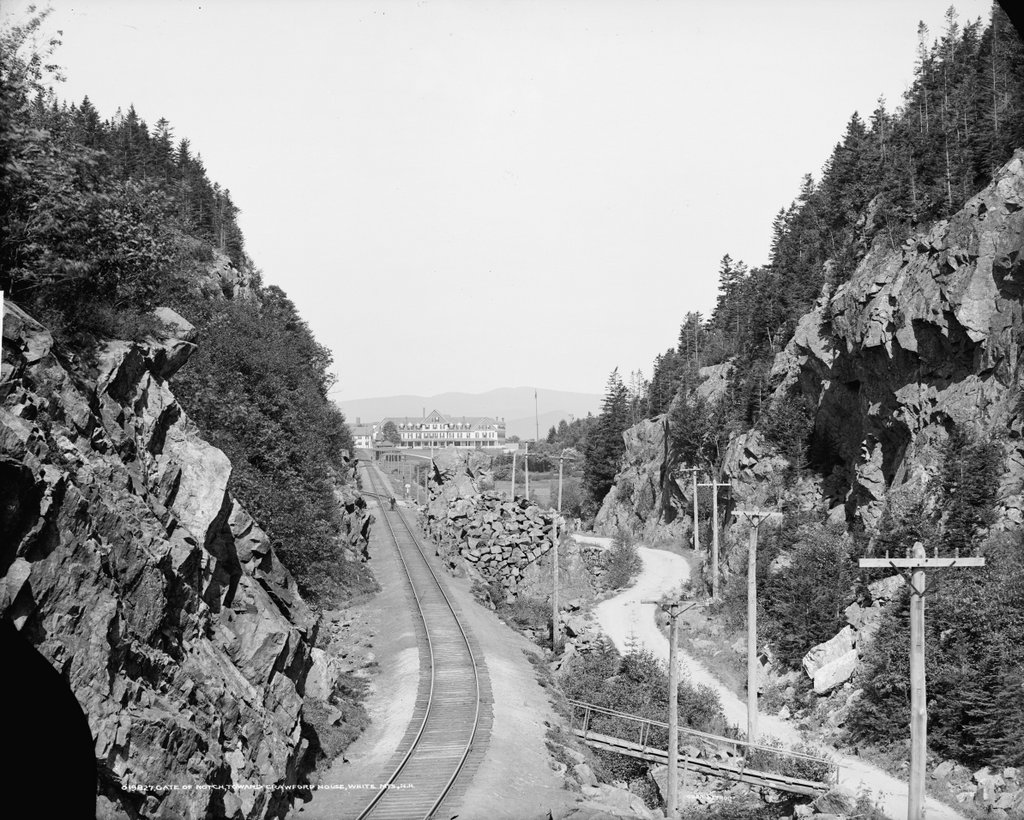 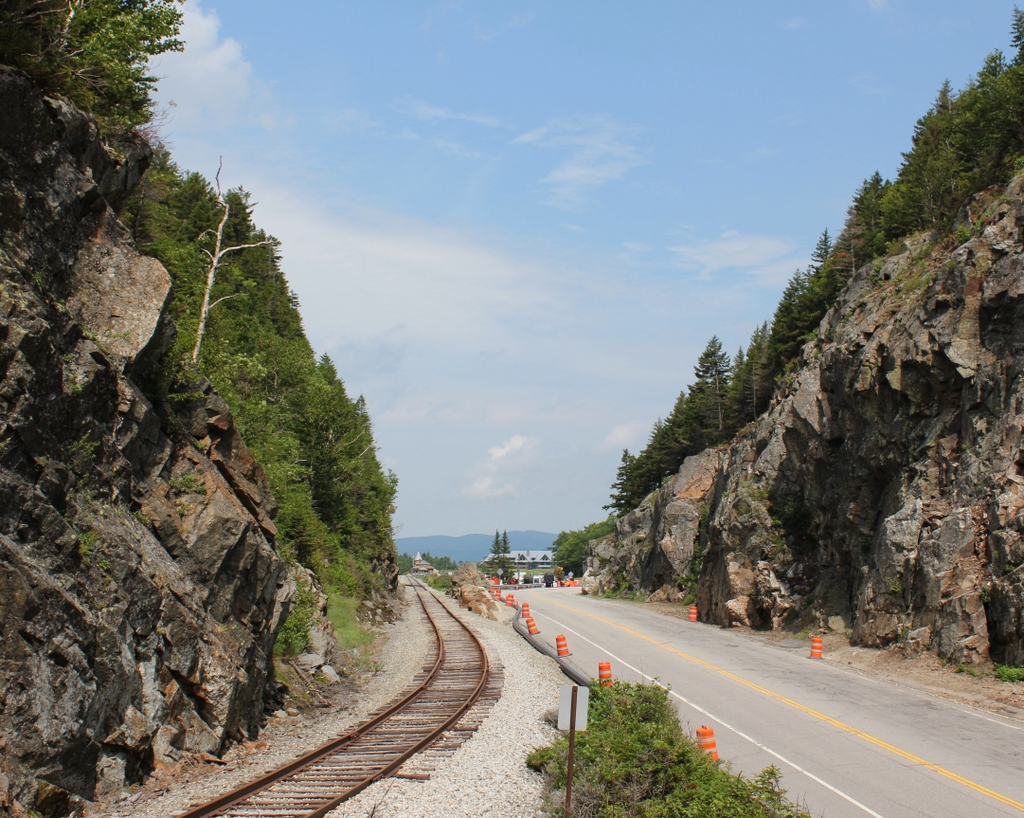 Crawford Notch is an important mountain pass within the White Mountains of New Hampshire. Until the completion of the Kancamagus Highway in the 1960s, it was the only east-west route through the mountain range, and over the years it has served as a major link between northern Vermont and the coastal region of southern Maine. The notch consists of a narrow valley that is several miles in length, but the actual mountain pass is here at the northern end of this valley, at a gap in the mountains that was originally barely 20 feet wide. This spot came to be known as the gate of the notch, because of the high rocks that stand on either side of the pass.

The highest point of Crawford Notch is just to the north beyond the gates, in the distance of this scene. At 1,900 feet in elevation, it forms the divide between the Ammonoosuc River, which flows west to the Connecticut River and then to Long Island Sound, and the Saco River, which flows east through Crawford Notch and then to Maine, where it empties into the Atlantic Ocean just south of Portland. To the northeast of here is the Presidential Range, which begins here at the Notch and reaches its highest point, Mount Washington, about 6.5 miles from here. In the opposite direction, to the southwest of the notch, is the Peimgewasset Wilderness, the largest wilderness area in the state.

The first recorded discovery of Crawford Notch occurred in 1771, when Timothy Nash and Benjamin Sawyer came across it while hunting. As the story goes, Nash had become lost while tracking a moose. He climbed a tree in order to get his bearings, and in the process he sighted the gates here at the northern end of the notch. The notch had long been known to Native Americans, but Nash and Sawyer were evidently the first Europeans to find it, and within a few years there was a rough road through here.

The notch was ultimately named in honor of the Crawford family, who became the first permanent settlers of the area. Around 1790, Abel Crawford built a house a little further to the north of here, where he remained for several years before selling it to his father-in-law, Eleazer Rosebrook. Crawford then moved to the southern end of the notch, around the site of the present-day town of Hart’s Location.

Both he and Rosebrook operated inns for travelers, and Crawford helped to pioneer tourism to the White Mountains region. After Rosebrook’s death in 1817, Abel’s son Ethan Allen Crawford inherited the property here at the notch. Two years later, the Crawfords constructed an 8.5-mile trail from the notch to the summit of Mount Washington, and provided guided trips for visitors. Now known as the Crawford Path, it is considered to be the oldest continuously-used hiking trail in the country, and it has been incorporated into the Appalachian Trail.

One early visitor to this region was Timothy Dwight IV, a prominent author and theologian who served as president of Yale from 1795 to 1817. He came to the Notch on at least two separate occasions, and provided a description of it in his book Travels in New England and New York. In this particular visit, he approached the notch from the north, facing the opposite direction of these photos, and he wrote:

The entrance of the chasm is formed by two rocks, standing perpendicularly at the distance of twenty-two feet from each other: one about twenty feet in height, the other about twelve. Half of the space is occupied by the brook, mentioned as the head stream of the Saco; the other half by the road. The stream is lost, and invisible, beneath a mass of fragments, partly blown out of the road, and partly thrown down by some great convulsion.

When we entered the Notch we were struck with the wild and solemn appearance of every thing before us. The scale, on which all objects in view were formed, was the scale of grandeur only. The rocks, rude and ragged in a manner rarely paralleled, were fashioned and piled on each other by a hand, operating only in the boldest and most irregular manner. As we advanced, these appearances increased rapidly. Huge masses of granite, of every abrupt form, and hoary with a moss which seemed a product of ages, recalling to the mind the “Saxum vetustum” of Virgil, speedily rose to a mountainous height. Before us, the view widened fast to the south-east. Behind us, it closed almost instantaneously; and presented nothing to the eye but an impassable barrier of mountains.

The first photo was taken more than a half century after Dwight wrote this account, but the notch still had much of the same rugged appearance that he would have seen. The road had been improved somewhat over the years, starting in 1806, when the Tenth New Hampshire Turnpike opened through the notch. By the late 1820s, the road was suitable for stagecoaches, but when the first photo was taken around the 1860s or 1870s, this section of the road still looked like a narrow dirt path through the wilderness.

Aside from the road, the only sign of civilization in the first photo is the Crawford House, which is barely visible in the distant center. The original Crawford House was built here in the early 1850s, but it burned in 1859. The hotel was quickly rebuilt on the same site, reopening later in 1859. This new building can be seen in both the first and second photos, and it stood here until it too was destroyed by a fire in 1977. The site of the hotel is now the Highland Center, a lodge and education center operated by the Appalachian Mountain Club.

Perhaps the most dramatic change in this scene occurred shortly after the first photo was taken, when a railroad was constructed through here. The first railroad across the continent had been completed in 1869, and by this point there was even a cog railway to the summit of nearby Mount Washington. However, it would take several more years for railroad engineers to conquer Crawford Notch. The project required several long trestles and deep rock cuts, along with the widening of the gap here at the gates of the notch. The grade of the railroad was also a challenge, with northbound trains having to ascend 1,623 feet in just 30 miles, but the Portland & Ogdensburg Railroad was ultimately completed through the notch in 1875.

In addition to improving transportation through northern New England, the railroad also provided passenger service to the heart of the White Mountains, making it easier for tourists to visit the region. Several of the grand hotels along the route even had their own stations, including the Crawford House, whose station is barely visible in the distance on the right side of the tracks in the second photo. This particular station building had been constructed in 1891, several years after the Maine Central Railroad acquired the Portland & Ogdensburg, and it is still standing today as the only surviving structure from the second photo.

In more than a century since the second photo was taken, the road through the notch has been widened and straightened. It has come a long way since the dirt path of the first photo, and it is now designated as U.S. Route 302, which runs from Portland, Maine to Montpelier, Vermont. Today, it remains as important a route through the White Mountains as it had been when the first road was constructed through here in the 18th century. In that sense, the road has actually outlived the railroad, which was abandoned by Maine Central’s successors, Guilford Transportation, in 1983. However, this section of railroad was ultimately acquired by the Conway Scenic Railroad, which operates excursion trains for tourists. The railroad also owns the station here in the distance, and it serves as the northern terminus for most of its trains.

Today, the White Mountains are still a popular tourist destination, and Crawford Notch is still a major focal point within the region. Most of the notch is within the town of Hart’s Location (population 41 as of 2010), but the northern border of the town is here at the gates of the notch, so the buildings in the distance are actually within the town of Carroll. The land on the Carroll side of the border is still privately owned, but the Hart’s Location side is part of the 5,775-acre Crawford Notch State Park. This park is, in turn, mostly surrounded by the much larger White Mountains National Forest, which covers more than 750,000 acres in New Hampshire and Maine.