Looking south on the New Haven Green from near the corner of Elm and Church Streets, around 1900-1912. Image courtesy of the Library of Congress, Detroit Publishing Company Collection. 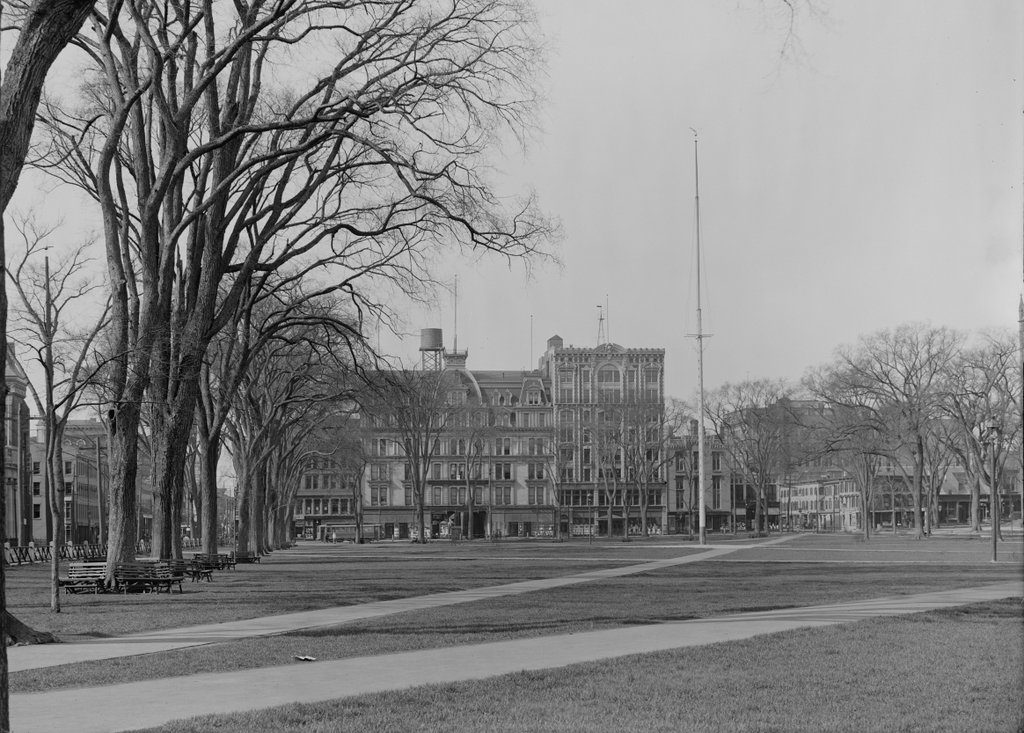 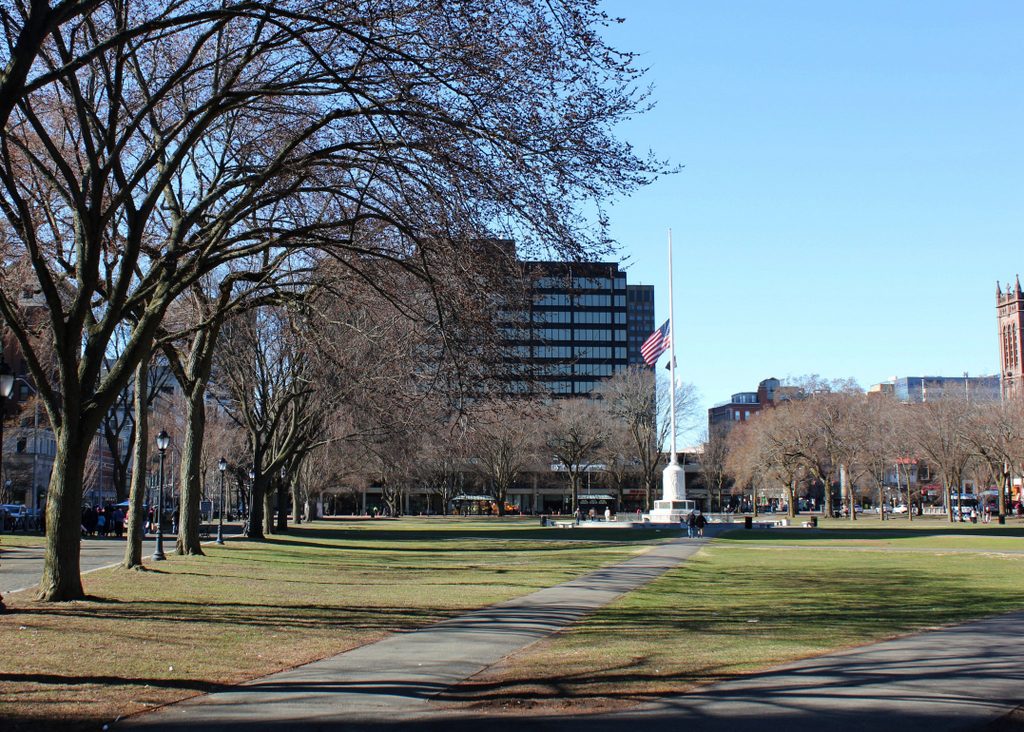 The New Haven Green dates back to 1638, when it was established as one of the first town commons in the English colonies. Over the years, it would serve as the focal point of the community, and many of New Haven’s most important churches, businesses, educational institutions, government buildings, and houses have been located around – and in some cases on – the Green. These two photos show the view looking toward the southeast corner of the Green, with Church Street in the far left and Chapel Street running across the scene in the distance.

At the turn of the 20th century, this section of Chapel Street was the home of two of New Haven’s most important department stores. On the left side of the block was Gamble-Desmond, which occupied the ornate six-story, Second Empire-style building in the center of the first photo. Known as the Insurance Building, it was completed in 1871, and originally housed the offices of the American National Life and Trust Company. Other tenants included F. M. Brown & Co., a dry goods store that was purchased by David S. Gamble and John D. Desmond in 1898. Together they formed the Gamble-Desmond Company, and this department store became an important fixture in downtown New Haven throughout the first half of the 20th century.

On the right side of the block, the other major department store in this scene was the Edward Malley Company. It was founded in 1852, and during its early years it operated out of a two-story building at the corner of Chapel and Temple Streets. This building is partially visible in the distance of the first photo, a little to the right of the flagpole, but by the turn of the century the Malley Company had significantly expanded to include much of the block. The most recent addition in the first photo was the eight-story building just to the right of the Gamble-Desmond building, which was completed in 1899.

Along with Gamble-Desmond, Malley’s would also remain here at its Chapel Street location for many decades. However, as was the case in cities across the country, these once-thriving department stores began to suffer by the mid-20th century, as suburban shopping centers began to displace traditional downtown business districts. Gamble-Desmond closed in 1952, and the building was demolished several years later. Then, in 1962, Malley’s relocated to a new building two blocks to the south of here, and the old building was demolished to construct the Chapel Square Mall, which occupied the entire block along Chapel Street between Church and Temple Streets. The complex also included a hotel, along with an office tower, which is visible in the center of the present-day photo.

The mall was completed in 1967, and was successful for the first decade or two. However, the new Malley’s location, which served as one of its anchor stores, closed in 1982, and the mall began to decline. This was the case for many downtown indoor malls, which tend to combine the disadvantages of both downtown shopping and mall shopping, while offering few of the advantages of either. Both the office tower and the hotel are still here, but the mall ultimately closed in 2002, and its indoor space has since been converted into apartments.