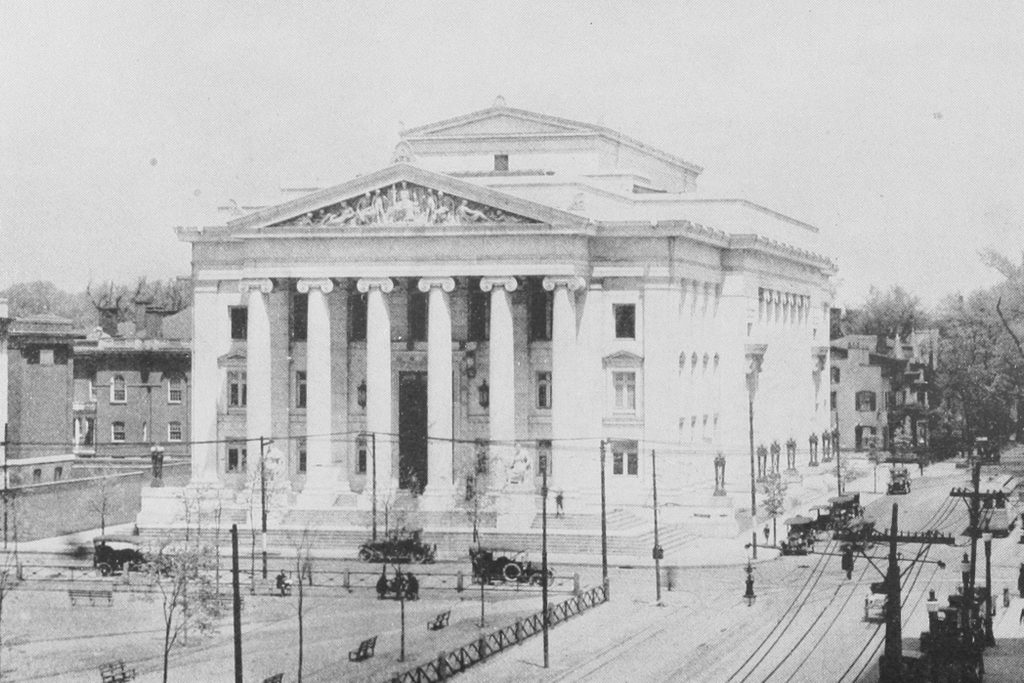 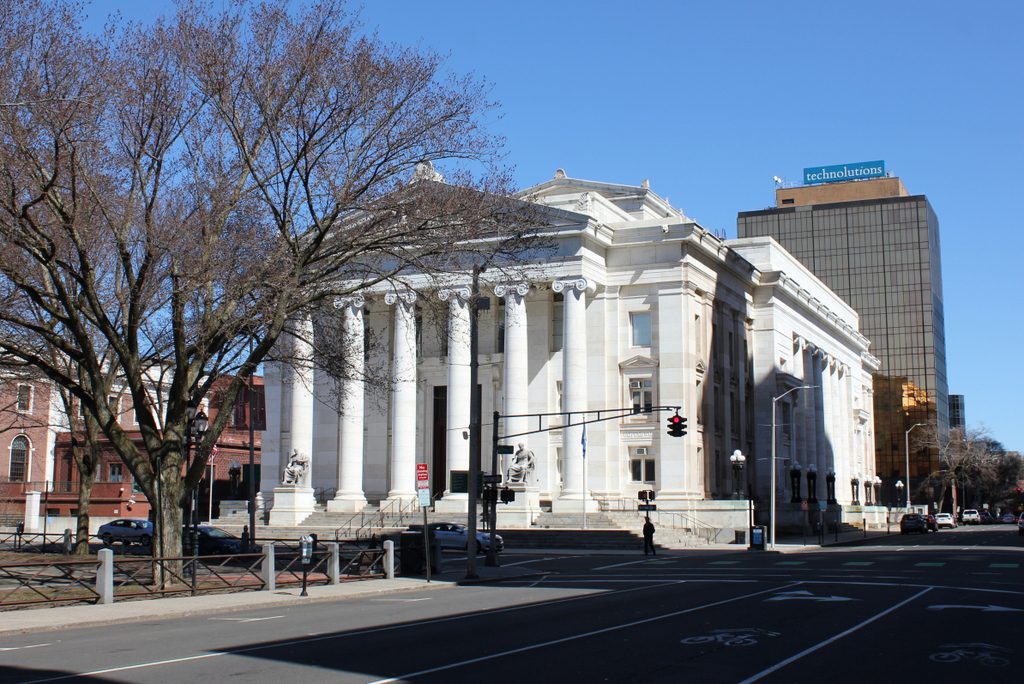 This courthouse was built in 1914, and it stands as an excellent example of the Beaux-Arts and Classical Revival styles of architecture that were popular in the early 20th century, particularly for government buildings. It was the work of local architect William H. Allen, and he designed it to resemble an ancient Greek temple, with classically-inspired features such as Ionic columns on the front and sides of the building, and a front portico with a pediment that was decorated with carved figures. These figures are allegorical representations of Justice, Victory, Precedence, Accuracy, Common Law, Statutory Law, Progress, and Commerce, and they were the work of noted sculptor John Massey Rhind.

Around the time that the building opened in March 1914, the Hartford Courant published a lengthy article about it, which included the following description of the interior:

Its lower walls are of marble, as are the stairways and the walls of the court rooms. The highest walls are tinted and are artistic and pleasing to the eye. A great dome of various colored glass adds to the beauty of the rotunda and the offices are all large and well appointed and handsomely furnished. Every piece of furniture in the building is of mahogany and all the trim is of the same wood. The offices of the county commissioners, sheriff, clerks of the court and the common pleas and superior and supreme court are on the first and second floors. The supreme court room on the second floor is a handsome place: the most beautiful by far of all the courtrooms, because of its large and impressive appearance. Each of the judges will have a private room and there will be all of the comforts and conveniences of home, including a modern tub and shower bath upstairs.

Over the years, this courthouse has been the site of several notable cases. These included Griswold v. Connecticut, a landmark Supreme Court decision that originated here in this courthouse in 1961, when Estelle Griswold and C. Lee Buxton were each fined $100 for violating Connecticut’s anti-contraception laws. This case eventually reached the Supreme Court, which overturned the conviction and set a major precedent for the right to privacy. Other important events here included the 1970 Black Panther Trials, which occurred after the arrest of nine Black Panther Party members in connection with the 1969 murder of Alex Rackley. The trials sparked large protests, with tens of thousands of demonstrators gathering on the New Haven Green outside of the courthouse, and most of the high-profile defendants were ultimately either acquitted or had the charges dropped.

The building was threatened by possible demolition in the 1950s, at a time when urban renewal projects were transforming the downtown areas of many cities across the country. However, it ended up being modernized instead, and it continues to be used as a county courthouse. Overall, very little has changed in its exterior appearance since the first photo was taken, and some of the nearby buildings are also still standing, including the Ives Memorial Library on the left side. Because of its historical and architectural significance, the courthouse was added to the National Register of Historic Places in 2003.