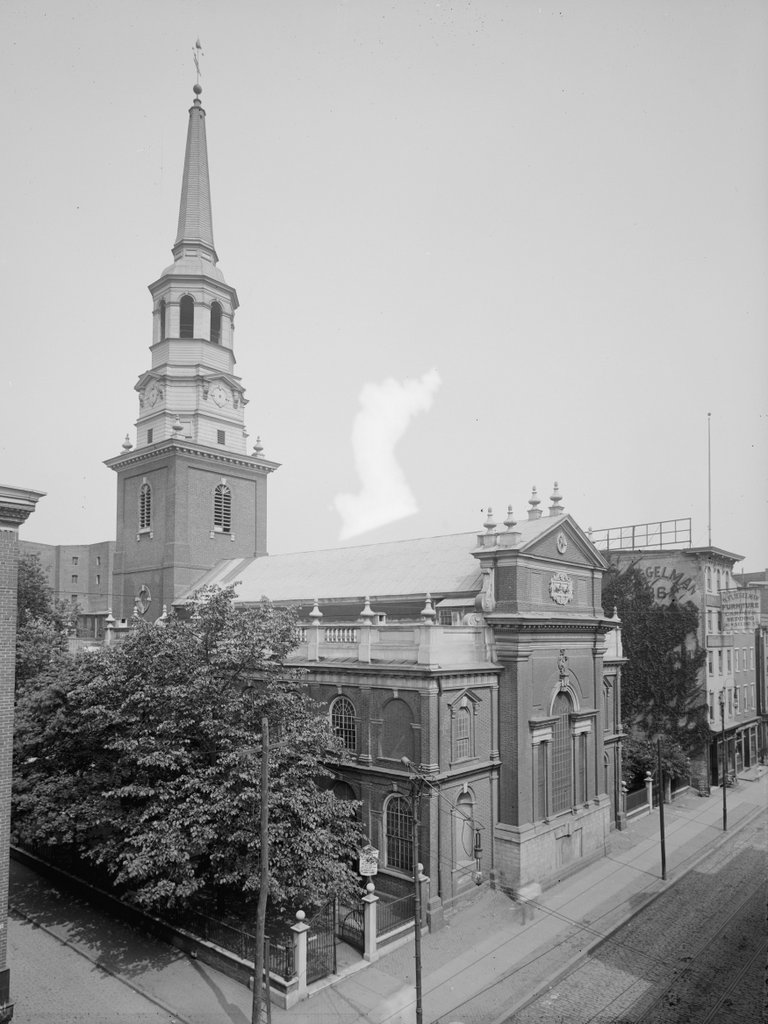 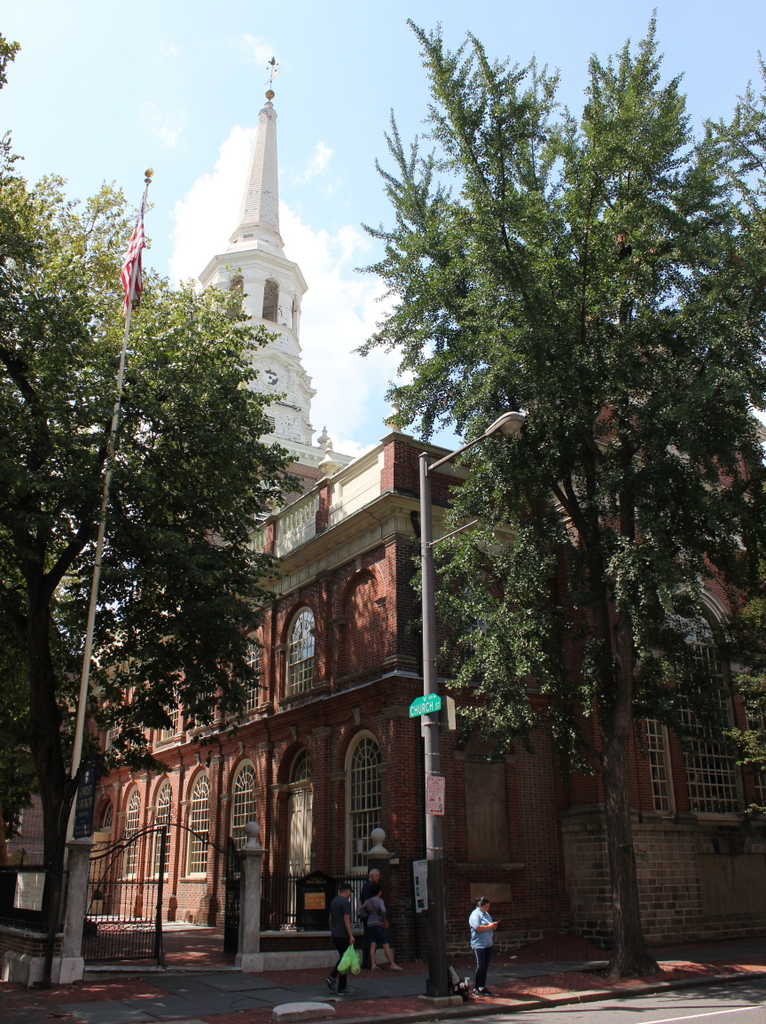 The city of Philadelphia was established in 1682 by William Penn, the founder of the Pennsylvania colony. Although Penn and his followers were Quakers, the colony was tolerant of other religions, and they were soon joined by settlers of other faiths, including Episcopalians, who established Christ Church in 1695. A small wooden church was built here on this site a year later, and it remained in use throughout the early 18th century.

However, in 1727, the parish began construction of a much larger church building. It took the next 17 years to build, and it was one of the grandest churches in the colonies at the time, in sharp contrast to the city’s plain, modest Quaker meeting houses. It featured Georgian-style architecture, with a design that was based on the London churches of famed architect Christopher Wren. The church itself was completed in 1744, although it took another ten years before the steeple was built. When finished, the steeple stood 196 feet in height, making it the tallest building in the American colonies at the time. It would continue to hold this record for more than 50 years, until the completion of Park Street Church in Boston in 1810.

During the 18th century, many of Philadelphia’s leading citizens were members of Christ Church. The most notable of these was Benjamin Franklin, who had even organized a lottery to help finance the completion of the steeple. Several other signers of the Declaration of Independence were also members, including Francis Hopkinson, Robert Morris, and Benjamin Rush. Even colonial governor John Penn—grandson of the Quaker William Penn—was a member. Given Philadelphia’s role as the seat of the Continental Congress, and later as the temporary national capital, a number of other founding fathers also attended services here, including George Washington and John Adams.

Throughout most of the American Revolution, the rector of Christ Church was the Reverend William White, who also served as chaplain of both the Continental Congress and later the United States Senate. After the war, Reverend White played an important role in the formal separation of the Episcopal Church from the Church of England. The first General Convention of the Episcopal Church was held here at Christ Church in 1785, and in 1787 White was ordained as the first bishop of the Diocese of Pennsylvania. He subsequently became the first presiding bishop of the Episcopal Church, serving in 1789 and from 1795 until his death in 1836. During this time, he continued to serve as rector of Christ Church, serving in that role for a total of 57 years.

By the time the first photo was taken at the turn of the 20th century, Christ Church was already more than 150 years old. Its interior had been remodeled several times by then, but the exterior remained largely unchanged in its 18th century appearance. Around this time, in 1908, the steeple was damaged in a fire caused by a lightning strike, but this was subsequently repaired.

Since then, there have been few changes to this scene, aside from the trees in the foreground, which partially hide the church in the present-day photo. The angle is a little different between the two photos, though, because the first one was evidently taken from the upper floors of a building across the street, allowing for a wider view than from street level on the narrow street. During this time, Christ Church has remained standing as both an active Episcopalian parish and as a major tourist attraction. It is one of the most important surviving works of Georgian architecture in the country, and in 1970 it was designated as a National Historic Landmark.