The Junction House on South Main Street in White River Junction, around 1865-1878. Image courtesy of the New York Public Library. 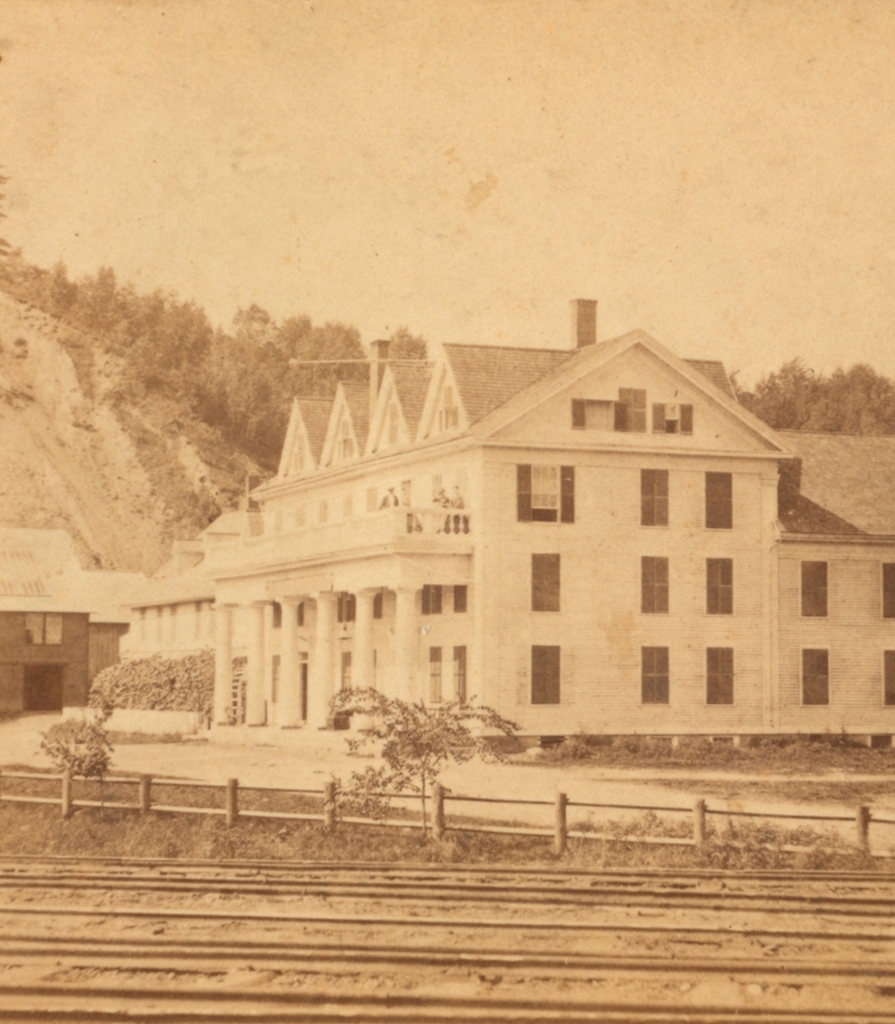 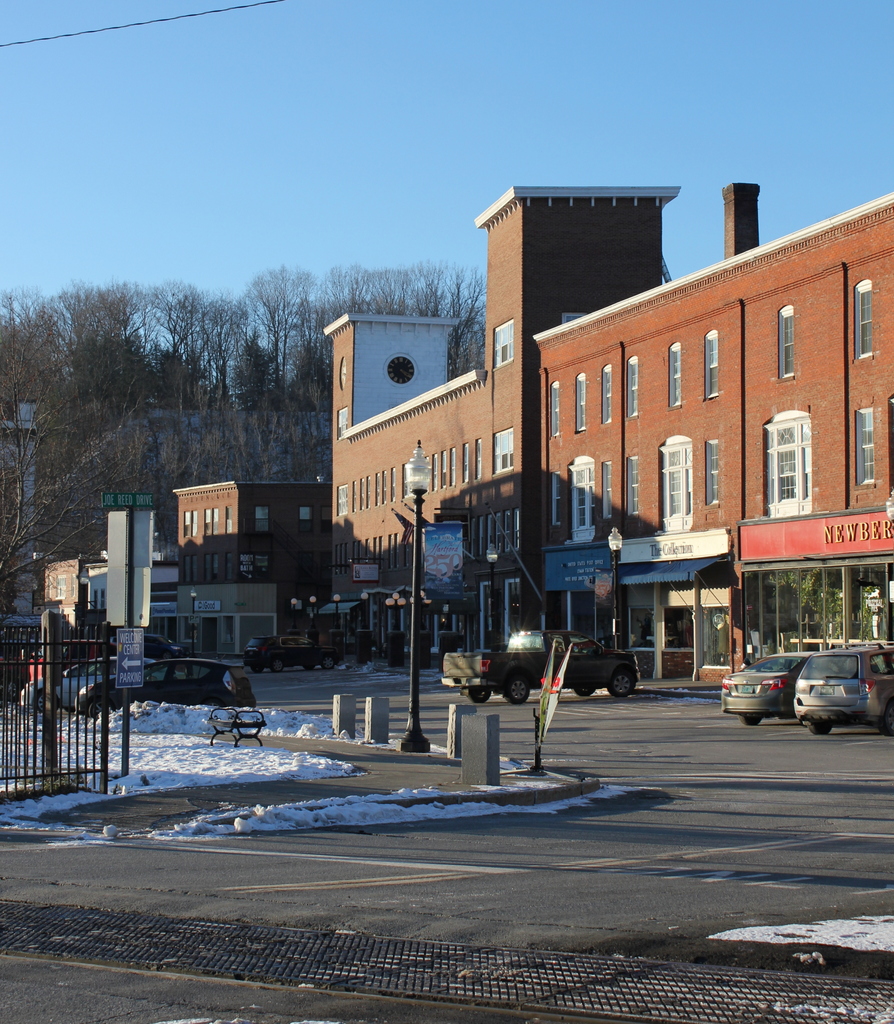 The late 1840s saw a frenzy of railroad construction in Vermont, and this site became an important hub in the state’s rail network. By the end of the decade, four rail lines converged here, with the Vermont Central Railway from the northwest, the Connecticut River Railroad from the south, the Connecticut and Passumpsic Rivers Railroad from the north, and the Northern New Hampshire Railroad from the east. A fifth railroad, the short 14-mile Woodstock Railroad, subsequently opened to the west of here in 1875, connecting White River Junction to Woodstock, Vermont.

Prior to the construction of these rail lines, this part of Hartford was sparsely populated, with only a few farms and a one-room schoolhouse. One of these farmers was Samuel Nutt, who had lived here since 1817 and owned about 500 acres of land. The rail lines met right near his house, and he was quick to recognize the strategic location of this property. By 1849 he had purchased the Grafton House hotel in nearby Enfield, New Hampshire, dismantled it, and rebuilt it here in White River Junction, as shown in the first photo. It was named the Junction House, and it thrived on business from the railroads, providing both meals and overnight accommodations for travelers.

Throughout the 1850s, advertisements for the Junction House regularly appeared in local newspapers, promising “Meals in readiness on the arrival of each train of Cars” along with “Horses and Carriages to Let.” One newspaper, the Independent Democrat of Concord, New Hampshire, published glowing remarks about the hotel in 1852 while describing a short layover here at White River Junction:

Here, being informed that we had half an hour’s waiting to do for the up-river train, most of our company—ourself in particular—went over to the Junction House, situated a few rods from the Depot, where we found a well-set and well-furnished table, at which we replenished the inner man to our hearts’—perhaps we should say bowels’—content. The Junction House is a new, commodiously built house, kept by Mr. H. F. Willis, who understands himself and the wants of his guests.

The “Junction House” at White River Junction, is one of the neatest and best managed hotels we have ever visited in Vermont; and, what is of more consequence to the proprietor, it does a capital business. Being favorably located for public travel it receives and entertains the travellers of three trains which have their terminus nightly at the Junction. Col. Samuel Nutt is the popular landlord who does the honors of the house, and he is very efficiently assisted by Mr. Wm. H. Witt, formerly of this village. The journey to Montpelier is made exceedingly pleasant and convenient by stopping over night under such care and with such excellent keeping.

Along with serving travelers, though, the hotel was also a meeting place for locals. During the 1850s and 1860s it was used for a variety of events, including railroad shareholder meetings, agricultural society meetings, public auctions, and nominating conventions for political parties. Most of these political conventions were for local and congressional district races, but the 1856 Republican state convention was held here in White River Junction, in a tent near the hotel. The event drew over two thousand attendees, but not all approved of the location, with the Middlebury Register writing:

We regret to close by hoping that the people of this state will never be called again to White River Junction for a similar purpose. The location is absurdly inconvenient, and a good many complaints of petty extortion at the Junction House, have reached our ears. One dollar for a hard dinner, at a Mass Convention of plain farmers, is cutting it rather fat.

By this point, Samuel Nutt was no longer running the hotel. He sold it earlier in 1856 to C. S. Hambleton, who was evidently responsible for making the attendees pay a dollar for dinner. Although it seems trivial now, this was a substantial amount of money at the time, equivalent to nearly $30 today. This controversy aside, the hotel continued to prosper in the years that followed.

However, in 1863 the owner at the time, Asa T. Barron, faced some legal trouble, first when one of the boarders accused him of assault. He was ultimately absolved after it was discovered that the boarder had instigated the disturbance and Barron had acted out of self defense. Just a few months later, though, Barron faced more serious trouble when he sold liquor here despite the state’s strict prohibition laws. He was found guilty of 36 violations, for which he was fined $360.

Barron continued to run the Junction House throughout the 1860s and 1870s, and the first photo was almost certainly taken during his ownership. It shows the view from near the railroad depot, looking southwest across the tracks. The village was still only lightly developed at the time, and the photo shows a gravel bank on the side of the hill beyond the hotel. An 1869 map of the village shows only a handful of buildings along this section of South Main Street, and most of these appear to have been houses, with the exception of the Junction House and a nearby store that was operated out of a converted farmhouse.

The original Junction House stood here until 1878, when it was destroyed by a fire on the morning of August 10. The fire began in the kitchen, and it soon spread throughout the building. Without any local fire companies, it took about an hour for firemen and equipment to arrive by train from Hanover and Lebanon, New Hampshire. By this point, the hotel was beyond saving, but the firemen were able to prevent it from spreading to other nearby structures.

The fire caused an estimated $50,000 in damage to the property, only about half of which was insured. Apparently, not everyone saw the fire as a tragedy, though. Writing just over a decade later in History of Hartford, Vermont, July 4, 1761-April 4, 1889, author William Howard Tucker argued that “It was a den of wickedness and its destruction should have been regarded by the senior proprietor thereof as the natural sequence of the unrestricted looseness that characterized his system of running this public house.”

Such disapproval notwithstanding, the Junction House was soon rebuilt. The new building was completed in 1879, and it was about one and a half times larger than the old one, featuring room for about 200 guests and a hall that could seat about a thousand. It was four stories in height, and it had two towers, which were located on either end of the front facade. Asa Barron still owned the hotel at the time, but he sold the property within about a year of the completion of the new building.

The new Junction House remained an important hotel into the 20th century. It was eventually expanded to 340 rooms, and in 1925 it was renamed the Hotel Coolidge in honor of the owner’s close friend, John C. Coolidge, the father of then-President Calvin Coolidge. Many evidently assumed that it had been named for the president, and the Caledonian Record of St. Johnsbury humorously observed that the change was done “probably in the hope that it will be quieter at night,” in reference to Calvin Coolidge’s famously silent demeanor.

Only a few weeks later, though, the newly-renamed hotel also burned. This time, it was caused by an oil heater that exploded on the second floor. As with the fire nearly a half century earlier, crews from New Hampshire arrived to fight the flames, but the building was a total loss. The fire also destroyed eight stores on the ground floor, but all of the guests were safely evacuated from the hotel and there was no loss of life.

As before, the hotel was quickly rebuilt, and this time it had a brick facade. Its exterior lacked the ornamentation of the previous hotel, but it featured two towers that echoed those of its predecessor. This building has now stood here for longer than the two earlier ones combined, and it remains the Hotel Coolidge nearly a century after it was completed. During this time, it has even hosted its namesake president in May 1929, when Coolidge spent several days at the hotel while on a fishing trip, several months after leaving the White House.

Today, with the decline of rail travel, White River Junction is no longer the bustling railroad hub that it once was. The area is still at the juncture of two major transportation routes, with Interstates 89 and 91 crossing just to the west of here, but the highways bypass the village itself. However, many of the historic buildings in the center of White River Junction have survived over the years, including the Hotel Coolidge and the surrounding commercial buildings, such as the large 1890 Gates Block on the right side of this scene, and the c.1910 Greenough Block, located beyond the hotel on the left side. All of these buildings, along with a number of others in the area, are now part of the White River Junction Historic District, which was added to the National Register of Historic Places in 1980.