The Junction House, at the corner of South Main Street and Gates Street in White River Junction, around 1900. Image from The Gateway of Vermont : Hartford and its Villages (1903). 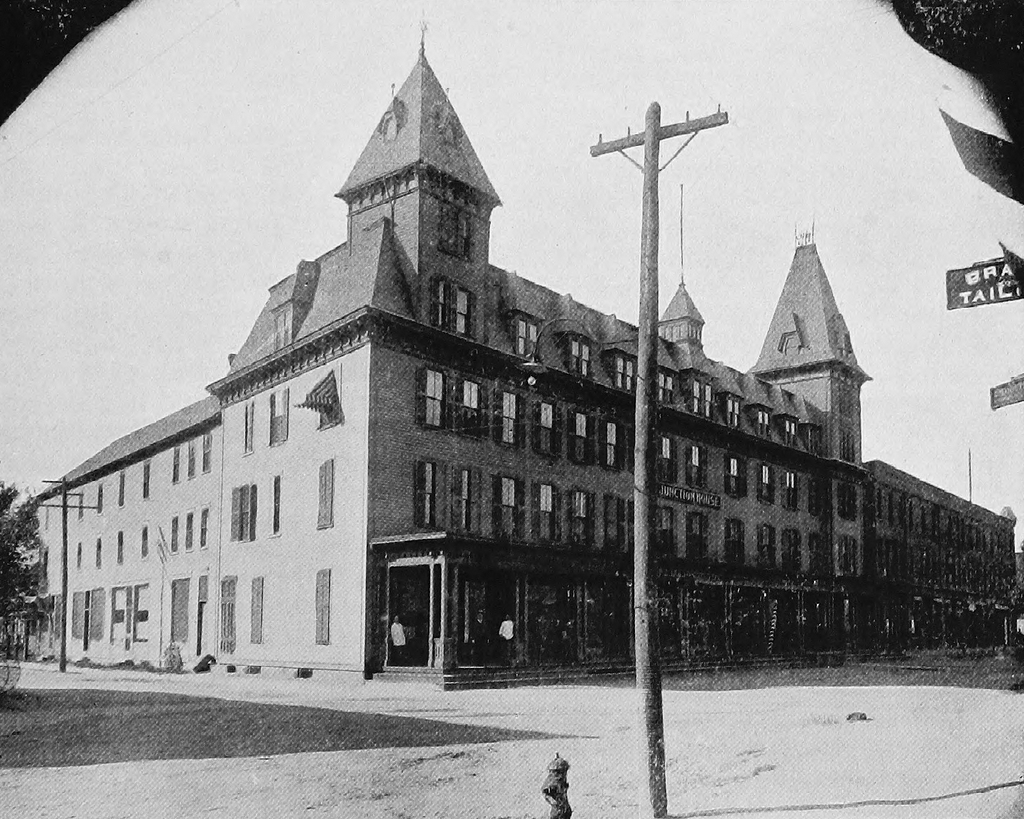 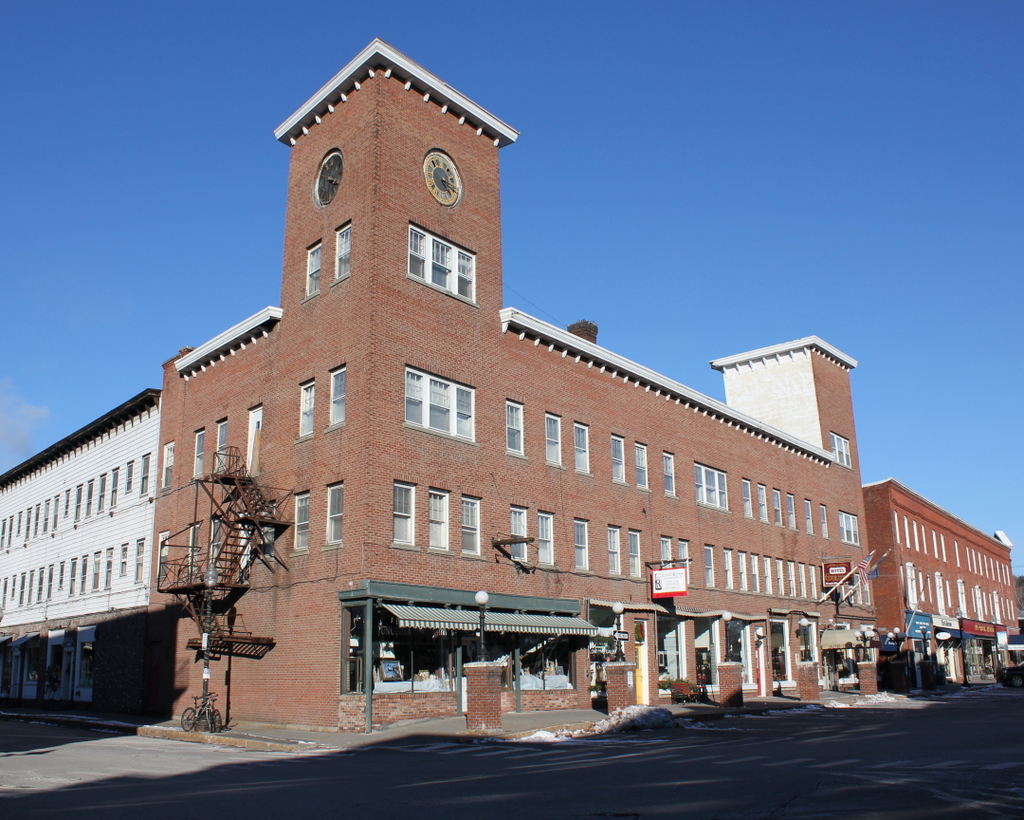 As discussed in the previous post, the first Junction House was built here in 1849. It was located on land that had previously been the farm of Samuel Nutt, but his property became far more valuable in the late 1840s, when this area became one of the most important railroad crossroads in northern New England. Anticipating the need for a hotel, Nutt purchased the Grafton House in nearby Enfield, New Hampshire, dismantled it, and rebuilt it here in the newly-created village of White River Junction.

This original building stood here for nearly 30 years, and during this time it provided meals and accommodations for rail travelers, while also serving as a meeting place for locals. However, like many wood-frame hotels of the period, it was vulnerable to fire, and it ultimately burned on August 10, 1878, after a fire began in the kitchen and spread throughout the structure.

The owner at the time, Asa T. Barron, quickly rebuilt the hotel with the building shown in the first photo. It was completed in 1879, and it was about one and a half times larger than its predecessor, with four floors and a capacity of about 200 guests. The exterior design was somewhat of a blend of Second Empire and Queen Anne styles, and it was topped by a Mansard roof and towers on either end of the main facade.

Upon completion, the new hotel was praised by the Green Mountain Freeman of Montpelier, which declared that it will “take rank among the best of our many first-rate Vermont hotels.” In the same article, the newspaper provided the following description of the building:

The front is shaded by a fine wide piazza, which gives a comfortable lounging place or a fine promenade. On the first floor is a reception room, hall, billiard room, wash room, office and proprietor’s private office, a boot and shoe store, drug store and watch-maker’s shop. Leaving the office for the dining room one enters a fine, large room, lighted on both sides, finished in brown ash (carefully selected for its beauty) finished in Eastlake style, joining which is a perfectly appointed kitchen. A broad, handsome stairway leads to the next story, where are reception room, ladies’ parlor, bath room, closets, etc., besides rooms in suites and handsome single rooms. The rooms on each of the other floors are of the same size, furnished in the same style, and all are furnished with black walnut, marble-topped chamber sets, and the excellent spring beds are furnished with 40 pound pure hair mattresses and nice blankets.

Within a year after the new hotel opened, it was again threatened by fire, this time from an attempted arsonist in July 1880. The perpetrator, who was apparently never identified, ignited rags and shavings in the basement in the middle of the night. However, it was extinguished soon after the night clerk discovered it, and it caused minimal damage to the building.

In 1887, the Junction House played a role in the aftermath of a far more serious disaster. At 2:10 a.m. on February 5, a northbound passenger train departed the depot here in White River Junction, across the street from the hotel. It was headed for Montreal, but just ten minutes later the four rear cars were derailed by a broken rail at a bridge less than five miles northwest of here. The cars fell off the bridge, landed on the thick ice over the White River, and caught fire when the coal stoves and kerosene lamps toppled over. The fire subsequently ignited the wooden bridge, and the burning timbers began raining down on top of the cars.

About 115 people were in these cars, and many found themselves trapped within the burning wreckage. Further compounding the problem was the air temperature, which was 20 degrees below zero, meaning that those who survived the flames were then at risk of hypothermia. Ultimately, an estimated 37 people died in the disaster, many of whom were burned beyond recognition. Among the dead was Frank L. Wesson of Springfield, Massachusetts, the son of Smith & Wesson co-founder Daniel B. Wesson.

Of the survivors, about 50 were injured, and the Junction House became a temporary hospital, along with the Pease Hotel in the nearby village of Hartford. Frank Wesson’s sister-in-law, Emily Lovell, was brought here to the Junction House, but she had only minor injuries, so she spent most of her time here tending to others. Some of the more seriously hurt passengers here at the hotel included Andrew Wheeler of Fitchburg, Massachusetts, whose injuries were described as “a bad cut over his eyes, bruised all over and somewhat burned, although not fatally hurt.” Another Fitchburg resident, Joseph Jacques, was also here at the hotel, with “a broken leg, a broken nose and serious bruises on the body,” in addition to frostbite on one of his feet.

Even as the injured were still recovering here, the state was already beginning its investigation. Just two days after the disaster, the Vermont Railway Commission convened here at the Junction House. The commission was chaired by former Governor Samuel E. Pingree, and the sessions here were also attended by then-Governor Ebenezer J. Ormsbee and Lieutenant Governor Levi K. Fuller. They heard testimony from various railroad employees and expert witnesses, and concluded that the broken rail had been defective. This, combined with the extremely cold temperatures and the fact that it was located at a slight curve in the tracks, caused it to break as the train passed over it. The commission also faulted the Central Vermont Railroad for using stoves and kerosene lamps, and reasoned that many of the victims would have otherwise survived the disaster if not for this practice.

Following this disaster, the Junction House continued to operate as an important railroad hotel, and in 1901 it was purchased by Lyman A. Gibbs and Nathaniel P. Wheeler for $50,000. The first photo was taken around this time, and it was published in the book The Gateway of Vermont : Hartford and its Villages in 1903, which provided the following description of the hotel:

The two hundred rooms of the house are maintained in perfect order, and the hotel’s cuisine, table, service and general accommodations are of a character that have won for the house a reputation throughout New England and the east. So many are the hotel’s daily guests that it in effect constitutes a community in itself, larger indeed than many a village. This daily assembly is preeminently a gathering of commercial men and representative of the country’s chief business interests. The management of the house is considerate, business-like and above all tactful. Large as it is and great as are the number of its guests there is that atmosphere about the house that causes the guest to feel at home, whether he be millionaire or commercial traveler on his initial trip. The house has every requisite of a hotel as respects heating, lighting, billiard room, barber shop, local and long distance telephones, and all else, but this does not mean that it has a bar for it has none, nor ever has had under its present management.

Under the ownership of Gibbs and Wheeler, the Junction House nearly doubled in size, bringing its total to 340 guest rooms. Then, in 1919, Gibbs sold his share of the business to Wheeler, who became the sole owner. A few years later, in January 1925, he renamed it the Hotel Coolidge, in honor of his close friend John C. Coolidge, a resident of Plymouth, Vermont whose son Calvin had just been re-elected as president.

However, only weeks later the building caught fire, on the evening of January 29, 1925, after an oil heater exploded on the second floor. All of the nearly 200 guests were safely evacuated, but the wood-frame hotel was quickly engulfed in flames and was a total loss. The fire caused the village’s electrical system to short circuit, leaving White River Junction in darkness, and it posed a serious threat to the surrounding buildings. The Boston Herald noted that local fire and police officials had initially called it a “1000 to 1 chance” of saving the rest of the village, but the responding firefighters, including crews from across the river in Hanover, Lebanon, and West Lebanon, New Hampshire, were ultimately able to prevent the flames from spreading.

Within a matter of weeks, Nathaniel Wheeler began construction on a new Hotel Coolidge building here on the same spot. Like the two previous hotels, it was built of wood, although it had a brick veneer on the South Main Street facade. In order to expedite its reopening, the front portion of the hotel was originally only two stories in height, with three stories along the Gates Street side of the building. It opened later in 1925, and in 1926 the front of the building was completed, with the addition of a third floor and two towers that echoed the appearance of its predecessor.

At the time, White River Junction was still a thriving railroad center, and the new Coolidge remained its leading hotel. A 1927 newspaper advertisement listed the room rates at $2.50 per night, or $3 for a room with a bath. According to another ad a few years later, the hotel had a total of 175 rooms, including 60 with tub baths and 40 with shower baths. During this time, its guests included President Coolidge himself, who visited here in May 1929 and spent a few nights at the hotel while on a fishing trip, two months after the end of his second term as president.

Both White River Junction and the Hotel Coolidge owed their existence to the railroads that brought prosperity to this village, but by the mid-20th century passenger rail travel was in a steep decline across the country. The village was also bypassed by the interstate highway system, with Interstates 89 and 91 meeting about a mile to the west of here. However, throughout this time the Hotel Coolidge has remained open, and it has retained much of its historic appearance on both the interior and exterior. Very little has changed in this scene since the mid-1920s, and the hotel’s neighbor to the right—the 1890 Gates Block⁠—is also still standing, as the only surviving building from the first photo. Both it and the hotel, along with many other buildings in the village, are now part of the White River Junction Historic District, which was added to the National Register of Historic Places in 1980.