Looking west on State Street from near the corner of State and South Pearl Streets in Albany, around 1904. Image courtesy of the Library of Congress, Detroit Publishing Company Collection. 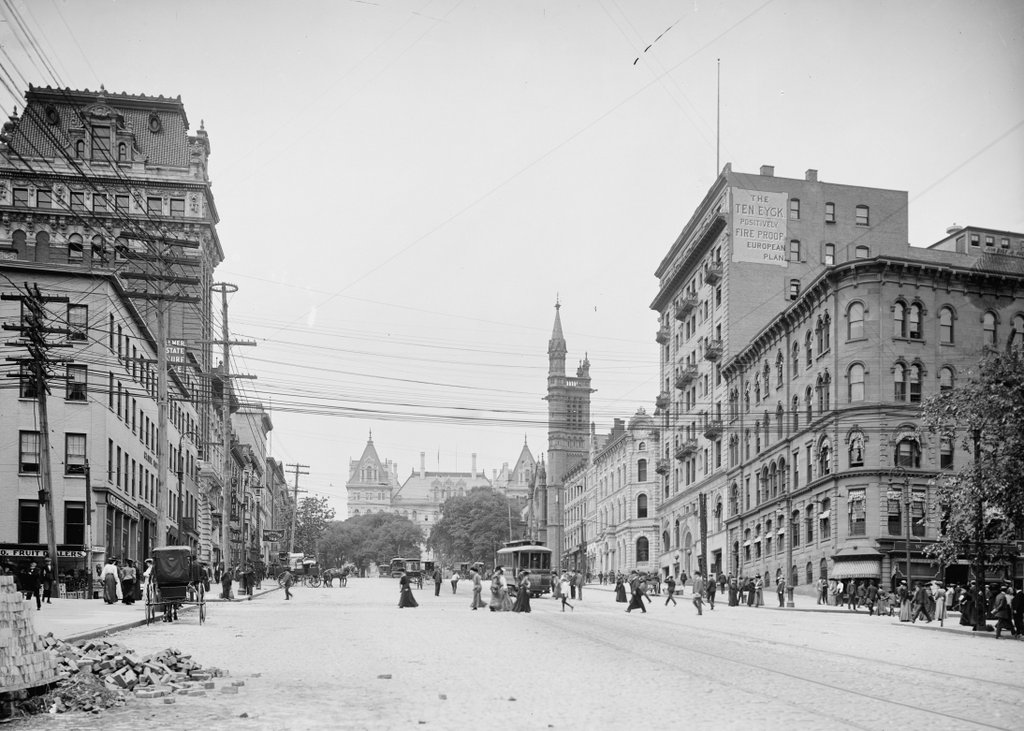 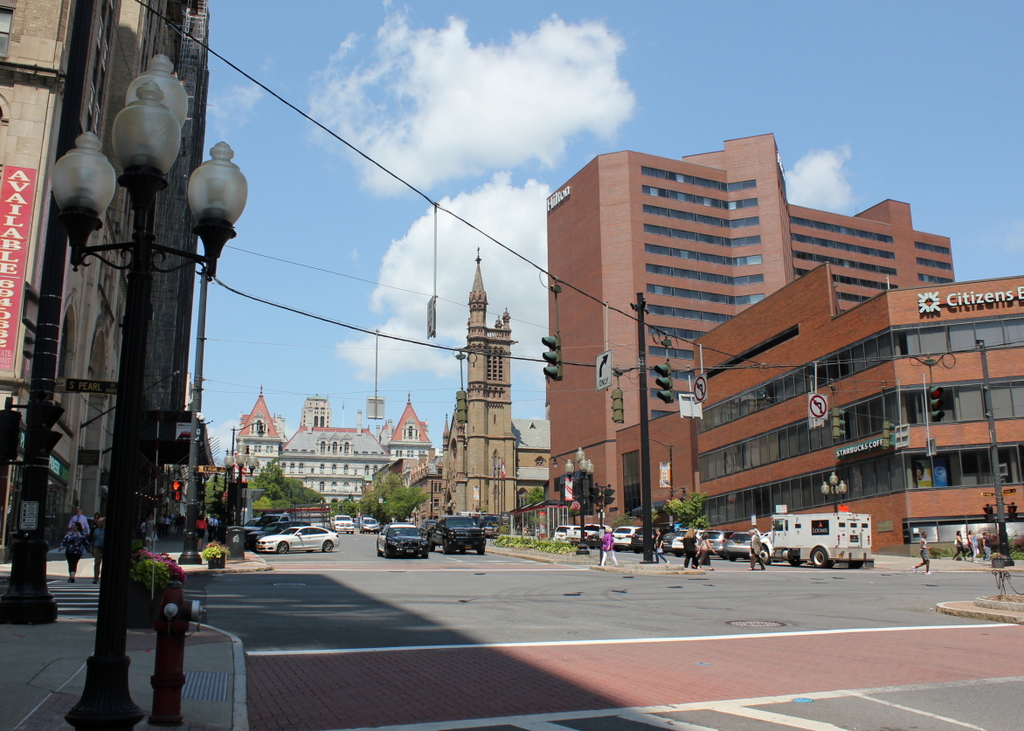 State Street is the main east-west route through downtown Albany, originally starting at the Hudson River wharves and extending westward up the hill in a straight line toward the state capitol. It provided a direct link between the city’s water and rail transportation and its government institutions, and in the process it passed through the heart of Albany’s central business district, which is shown here in these two photos.

The first photo was taken around 1904, and it shows a busy street scene. Dozens of pedestrians are visible walking on the sidewalks and crossing the street, and there is also a mix of horse-drawn wagons, along with at least three trolleys traveling up and down the hill. Automobiles are conspicuously missing from the scene, but this would not last long. The New York state legislature, meeting in the state capitol at the top of the hill here, had passed the first motor vehicle registration laws in the country in 1901, and by 1904 the state had some 15,550 registered cars on its roads.

The buildings on either side of State Street in the first photo reflect the changes in architectural styles during the late 19th century, along with the city’s growth during this same time. Starting on the far left is the Globe Hotel, which is perhaps the oldest building in the photo. It appears to have been built around the mid-19th century, and by the time the first photo was taken it housed the hotel, along with a number of retail tenants. These included a fruit market at the corner of South Pearl Street, and the photographic supply shop of Finch & Hahn on the State Street side of the building.

Further in the distance, towering above the Globe Hotel, is the Albany City Savings Institution building, which was probably the newest building in the first photo. This large Beaux-Arts building was designed by noted local architect Marcus T. Reynolds, and it opened in 1902 as the city’s first skyscraper. Just beyond the bank is another new building, the Empire Theatre, a burlesque theater that opened here in 1898.

On the other side of State Street, starting in the foreground, is the Tweddle Building. It was built at the corner of North Pearl Street in the mid-1880s, replacing the earlier Tweddle Hall, which had been destroyed in a fire in 1883. Beyond it is the Ten Eyck Hotel, with a painted sign on the side of the building proclaiming it to be “positively fire proof.” The nine-story hotel opened in 1899, filling a void in Albany’s hotel business after the Delavan House burned in 1894. This disaster, which claimed the lives of 16 people, would have still been fresh in people’s minds when the Ten Eyck opened, and likely explains why the owners went to such lengths to advertise its fireproof construction.

Beyond the Ten Eyck, on the other side of Chapel Street, is the Albany Savings Bank. This ornate building was completed in 1875, and it was occupied by the bank until the late 1890s, when the bank moved to a new building on North Pearl Street. The county then purchased the building, and it was in use as county offices when the first photo was taken.

Further up the hill from the bank building are two other commercial blocks, followed by St. Peter’s Episcopal Church on the other side of Lodge Street. The main portion of the church was designed by architect Richard Upjohn, who was particularly well-known for his Gothic-style churches. It was consecrated in 1860, but in 1876 the parish added the 180-foot tower, which was designed by Upjohn’s son, Richard M. Upjohn.

At the top of the hill, in the distant center of the first photo, is the New York State Capitol. Construction on the capital had begun in 1867, but it was not completed until 1899, when Theodore Roosevelt was governor. By the time the first photo was taken, Roosevelt had become president, but less than a decade later another politician with the same last name would arrive at the capitol. Franklin Roosevelt served here as a senator from 1911 to 1913, and he later returned as governor, serving from 1929 until he was elected president in 1932.

Today, nearly 120 years after the first photo was taken, the capitol still dominates the background of this scene. It remains in use as the seat of the state government, although it has since been joined by a number of other government buildings, including the 34-story Alfred E. Smith State Office Building, which rises above the roof of the capitol in the present-day photo.

However, most of the other buildings in this scene at the turn of the century are gone now, including everything in the foreground. The Globe Hotel was altered beyond recognition in the early 20th century, and was known as the Arkay Building until the late 1920s, when it was demolished to build the National Savings Bank, which stands on the site today. Across the street, the Tweddle Building was demolished in the mid-1910s, and in its place the Ten Eyck Hotel built a new 17-story skyscraper. The hotel also continued to operate the older Ten Eyck, which became known as the Annex, and both buildings stood here until they were demolished in the early 1970s.

Further in the distance, only a few recognizable buildings from the first photo are still standing, aside from the capitol. On the left, the Albany City Savings Institution is still here, although it was altered in the 1920s with the addition of a large clock tower, and it is now mostly hidden from this angle by the National Savings Bank. Across the street, St. Peter’s Church is also still standing. Unlike the Savings Institution building, it has not been overshadowed by taller neighbors, and it continues to be a very prominent feature here on State Street. It remains an active Episcopalian parish, and in 1980 it was named a National Historic Landmark, becoming one of four Albany buildings, including the capitol, to receive this designation.