Looking west on State Street from near the corner of State Street and Broadway in Albany, around 1902-1910. Image courtesy of the Library of Congress, Detroit Publishing Company Collection. 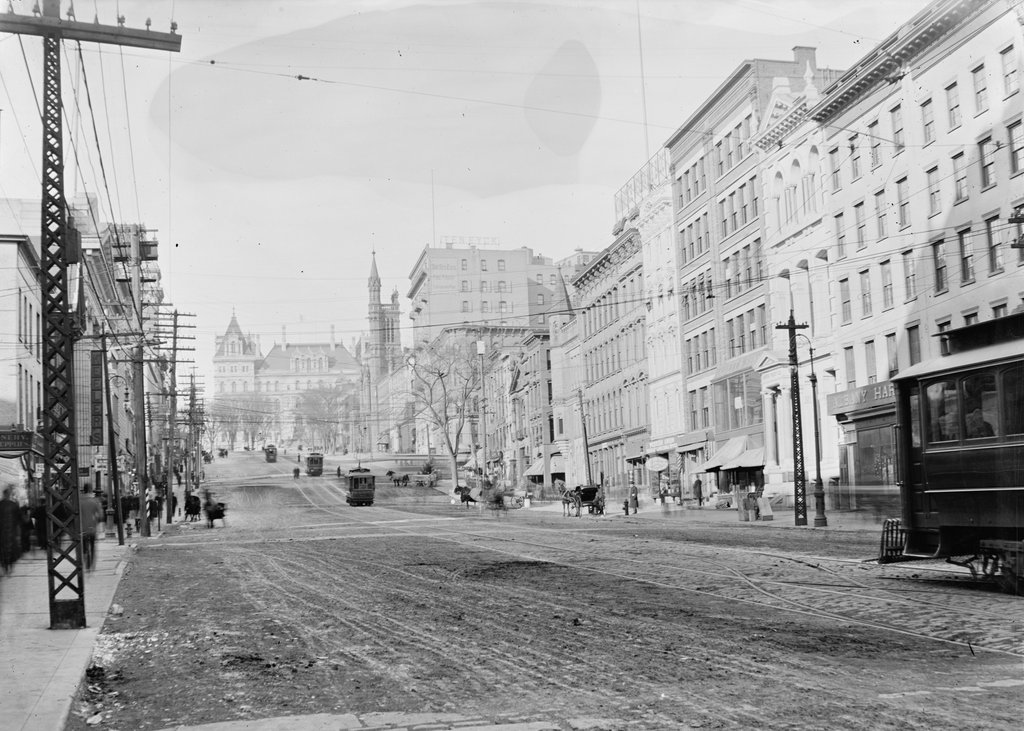 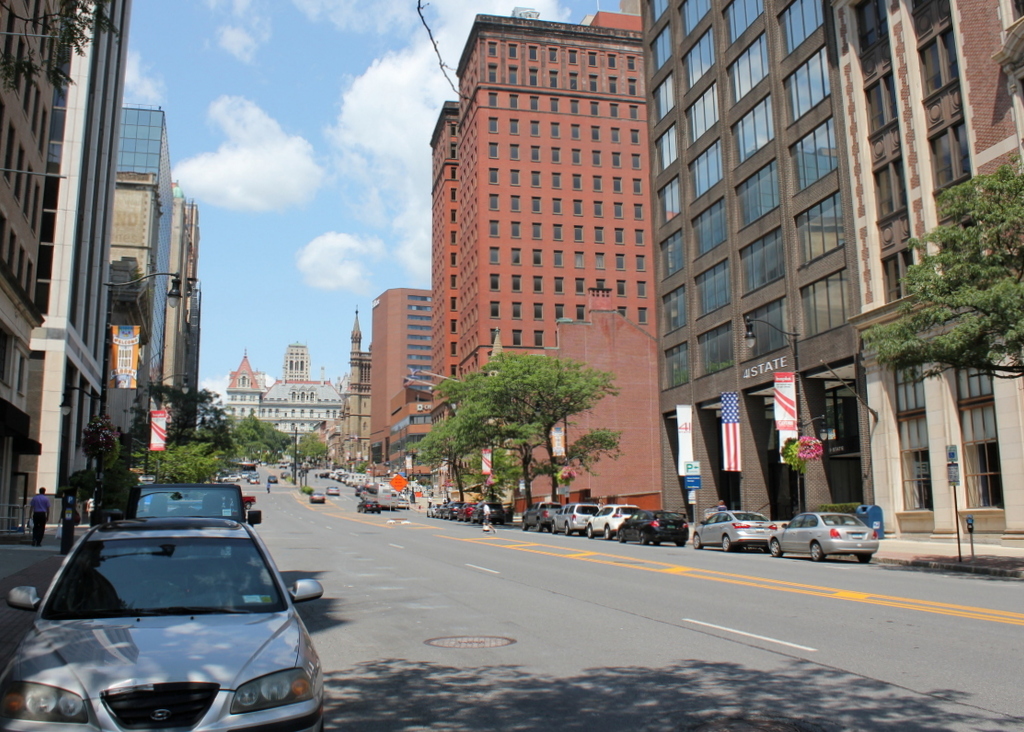 This scene is very similar to the one in the previous post, except these photos were taken a couple blocks further to the east, at the corner of State Street and Broadway. From here State Street, is visible for a quarter mile in the distance as it rises up the hill toward the New York State Capitol. This stretch of road is at the center of downtown Albany, and it has been the site of many historic buildings over the years.

When the first photo was taken, the buildings on the right side of this scene consisted of a mix of late 19th century commercial buildings, most of which were between four and six stories in height. The one outlier here was the nine-story Ten Eyck Hotel, which was built in 1899 and stands in the distance near the center of the first photo.

The buildings in the first photo were occupied by a mix of different businesses. Starting in the foreground, these included the Albany Hardware and Iron Company in the two buildings on the far right, and the Union Trust Company in the ornate light-colored building to the left of it. Further up State Street, the ground floor of the six-story building was occupied by the Cluett & Sons piano store on the right and the William M. Stetson stationery store on the left. Beyond that building, the next two housed a Western Union telegraph office and the Commerce Insurance Company.

Today, more than a century after the photo was taken, hardly any of these buildings are still standing on this side of State Street. The former site of Albany Hardware is now a 12-story office building at 41 State Street, and beyond it most of the other historic buildings on this block were demolished in the mid-19th century to create a surface-level parking lot.

Further in the distance, on the other side of James Street, the 16-story New York State Bank building dominates the center of the present-day scene. It was built in 1927, replacing a much smaller 1804 bank building that is barely visible in the distance of the first photo. However, the facade of the old bank was preserved, and it was incorporated into the State Street side of the new structure.

Beyond the New York State Bank, the next section of State Street has also been completely rebuilt since the first photo was taken. The Ten Eyck, which included a 17-story addition that was built in the 1910s, was demolished in the early 1970s, and the other nearby historic buildings were also gone by this point. In their place is a modern office building at the corner of North Pearl Street, and a Hilton at the corner of Lodge Street.

The only part of this scene that has not undergone dramatic change is near the top of the hill, where both the capitol and St. Peter’s Episcopal Church still stand, along with a row of historic commercial buildings. Closer to the foreground, though, there is only one surviving 19th century building along the entire stretch of State Street between Broadway and St. Peter’s Church. It is a small building, partially hidden by trees in the 2019 photo, but it stands at the corner of James Street. It was built in the mid-1870s for the Mechanics and Farmers Bank, with a Gothic exterior that was designed by prominent architect Russell Sturgis. Perhaps its most distinctive feature is the turret at the corner, which is partially visible in both photos. However, the east side of the building, which faces the parking lot, is a windowless, unadorned brick wall, a reminder that it was once part of a long row of adjoining buildings.