The Jones’ Hotel, on the south side of Chestnut Street between Sixth and Seventh Streets in Philadelphia, in December 1858. Image courtesy of the Library Company of Philadelphia, Frederick De Bourg Richards Photograph Collection. 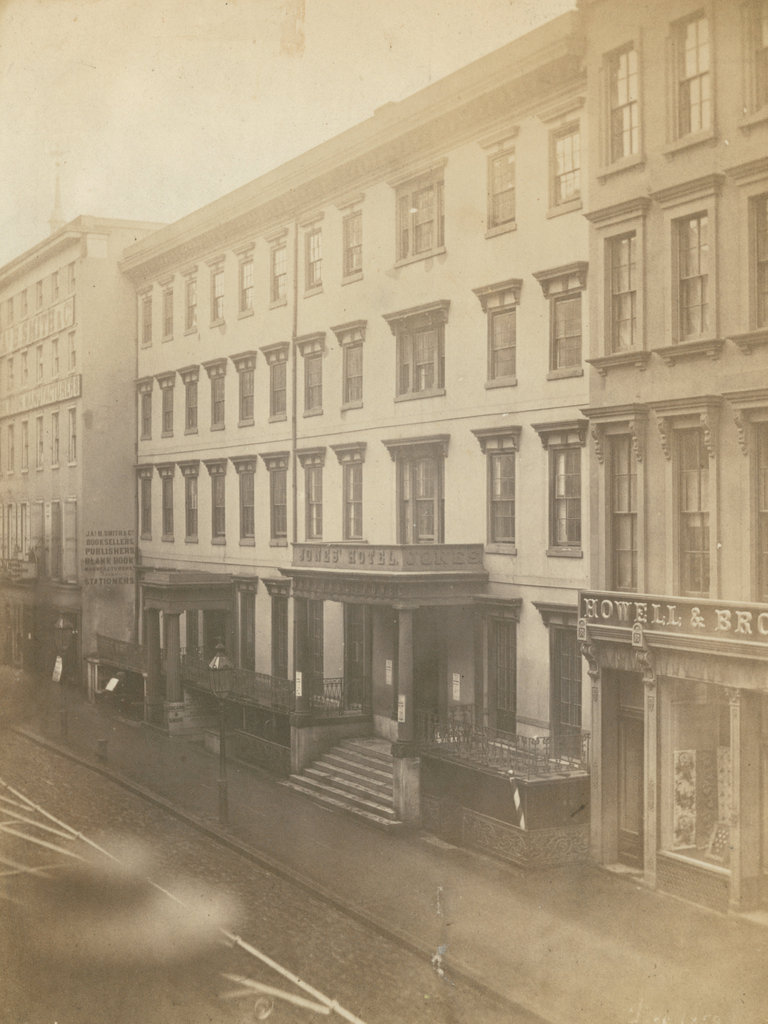 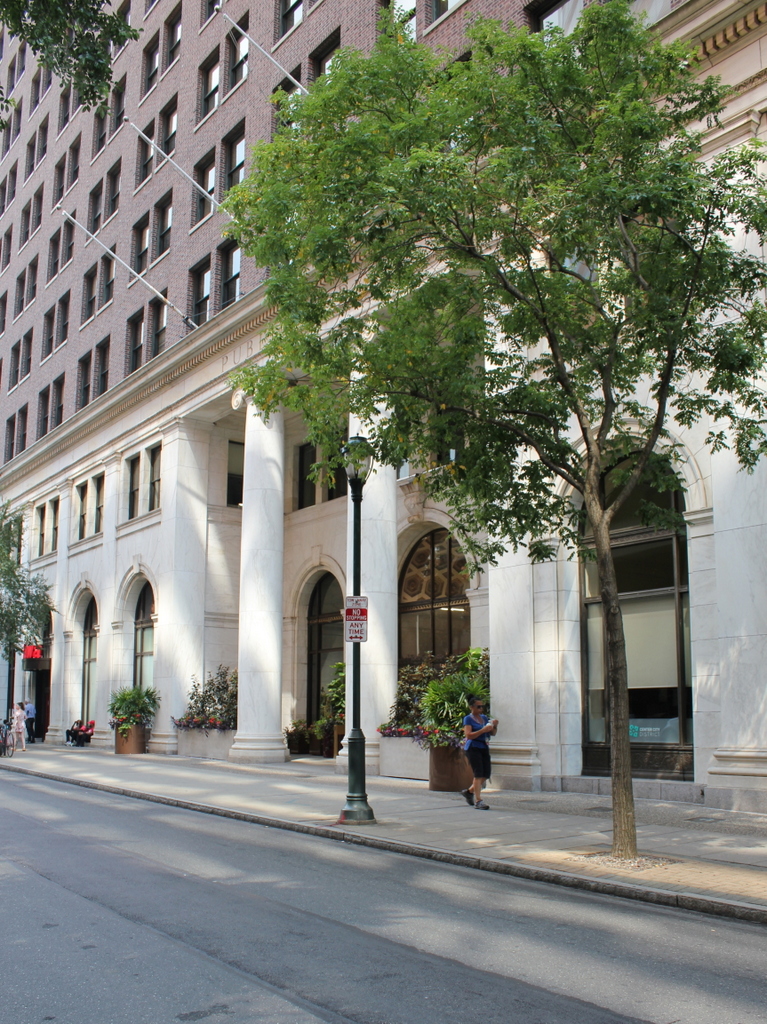 The first photo shows the Jones’ Hotel, which stood on the south side of Chestnut Street between Sixth and Seventh Street. The photo is part of a scrapbook that was compiled in the 1850s to document historic 18th and early 19th century buildings in Philadelphia. Most of the buildings in the scrapbook have long since been demolished, so images such as this one provide a rare glimpse of the city during the early years of photography. The original image, which is now in the collections of the Library Company of Philadelphia, also includes a caption, probably contemporary to the photo, that reads:

Yohe’s, late Jones’ Hotel. On the south side of Chestnut St., next to the Clymer mansion (afterward Geo. Harrison’s residence) between Sixth and Seventh St. The site, in the olden times, of the celebrated “Oeller’s hotel.”

As indicated by the caption, this was once the site of Oellers’s Hotel. It was one of the city’s leading hotels of the late 18th century, but it was destroyed by a fire on December 17, 1799. The site was subsequently redeveloped with houses, but in 1833 hotelier Catharine Yohe purchased two of these homes, demolished them, and constructed the right-hand side of the building in the first photo. It opened in December 1833, and according to a July 10, 1859 article in the Sunday Dispatch it was, at the time of its completion, the only purpose-built hotel building in the city. Its opening was widely announced in newspapers, including classified advertisements as well as news articles that may have been thinly-disguised advertisements. One such article, published in the Philadelphia Inquirer on December 5, speaks of the hotel in glowing terms:

This elegant and commodious establishment is now opened for the reception of Travellers. A more beautiful situation could hardly have been chosen for the erection of a large Hotel—it stands on Chestnut Street—directly opposite the Philadelphia Arcade and Peale’s Museum—between Sixth and Seventh Streets. This extensive building contains numerous parlours, all beautifully furnished—upwards of 100 Bed chambers, admirably arranged for comfort and convenience in all seasons. The Bars are judiciously placed so as to prevent confusion, in directing servants. The Dining Room is perhaps the largest, and most beautifully arranged, of any in the United States—the whole furnished after the order of Modern Architecture, with Furniture to correspond. This extensive and valuable establishment is under the immediate direction of Mrs. Yohe, the owner. From the well known character and capacity of this Lady we may infer that hospitality, kindness and attention will be extended to all, who favour the North American Hotel with their patronage.

Catharine Yohe operated the hotel for the next six years, but in 1839 she sold it to John A. Jones. He subsequently expanded the hotel by purchasing the other two adjoining houses, demolishing them, and building the section of the hotel on the left side of the scene. He also changed the name of the hotel, and it became Jones’ Hotel, as shown above the door in the first photo Under his management, the hotel became the finest in the city during the mid-19th century. The 1859 Dispatch article described it as having been the “‘crack’ house of its time,” a term that meant something very different than it does now.

Jones retired in 1847 and sold the hotel to Noah Bridges and John West. They retained the name, likely because of the reputation that it carried, and the hotel continued to be successful into the mid-1850s. During this time, one of its notable guests was Jenny Lind, during her highly-publicized tour of the United States. She arrived in Philadelphia in October 1850, and her first performance in the city was across the street from here at the Chestnut Street Theatre. Her arrival was highly anticipated by the people of Philadelphia, to the point where Chestnut Street was crowded with people waiting to catch a glimpse of her. However, because of the dense crowds she had to enter via the back entrance on Samson Street. This upset the crowd, though, and they did not disperse until Lind acceded to their demands and appeared at the window waving a handkerchief.

The hotel changed ownership several more times during the 1850s, and by 1858 it had declined to the point where it was vacant, with the furniture sold at auction by order of the sheriff. It was subsequently renovated and reopened in 1859, but it does not appear to have remained in business for very long. Over the next few decades, the building saw several other uses, including as a theater and as the newspaper offices of the Philadelphia German Democrat. Despite these changes, though, an 1887 article in the New York Tribune reported that the room where Jenny Lind stayed has never been altered, and was at the time being used as the offices of W. H. Shaffer & Co. jewelers.

It seems unclear as to exactly when the old hotel building was demolished, but it was definitely gone by the early 1920s, when this entire block of Chestnut Street was cleared to build the new office building of the Philadelphia Public Ledger. The newspaper went out of business only two decades later, but the massive 12-story building is still standing here today, as shown in the 2019 photo.