Marble House on Bellevue Avenue in Newport, around 1895. Image courtesy of the Library of Congress. 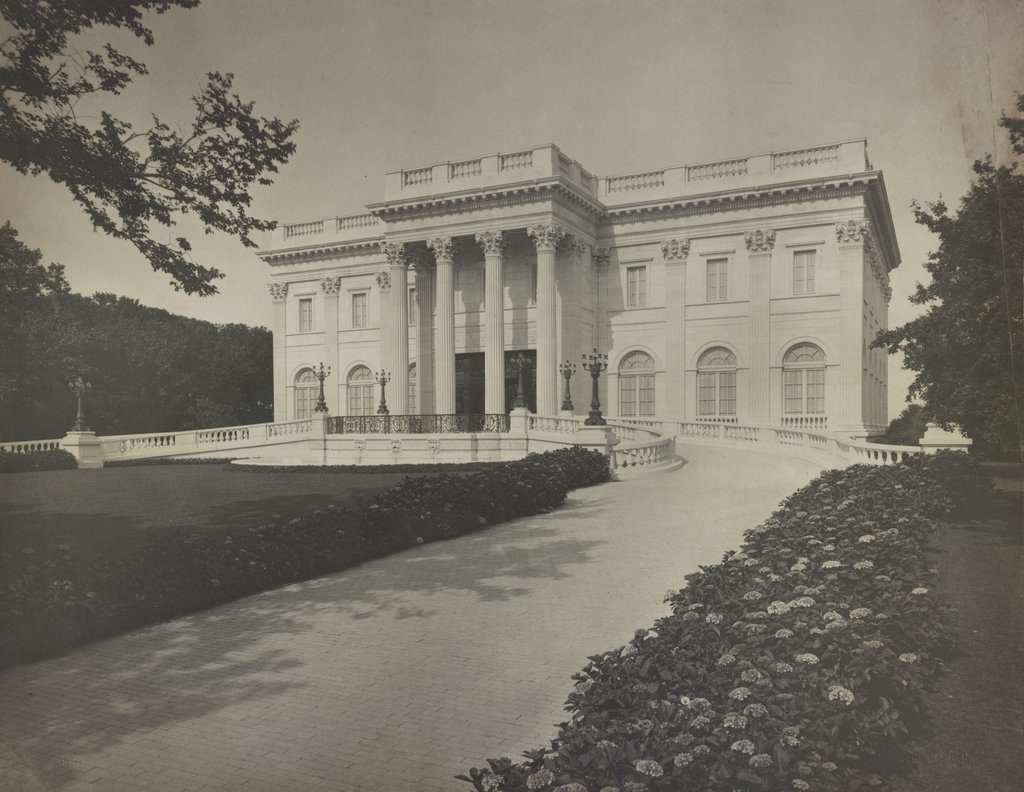 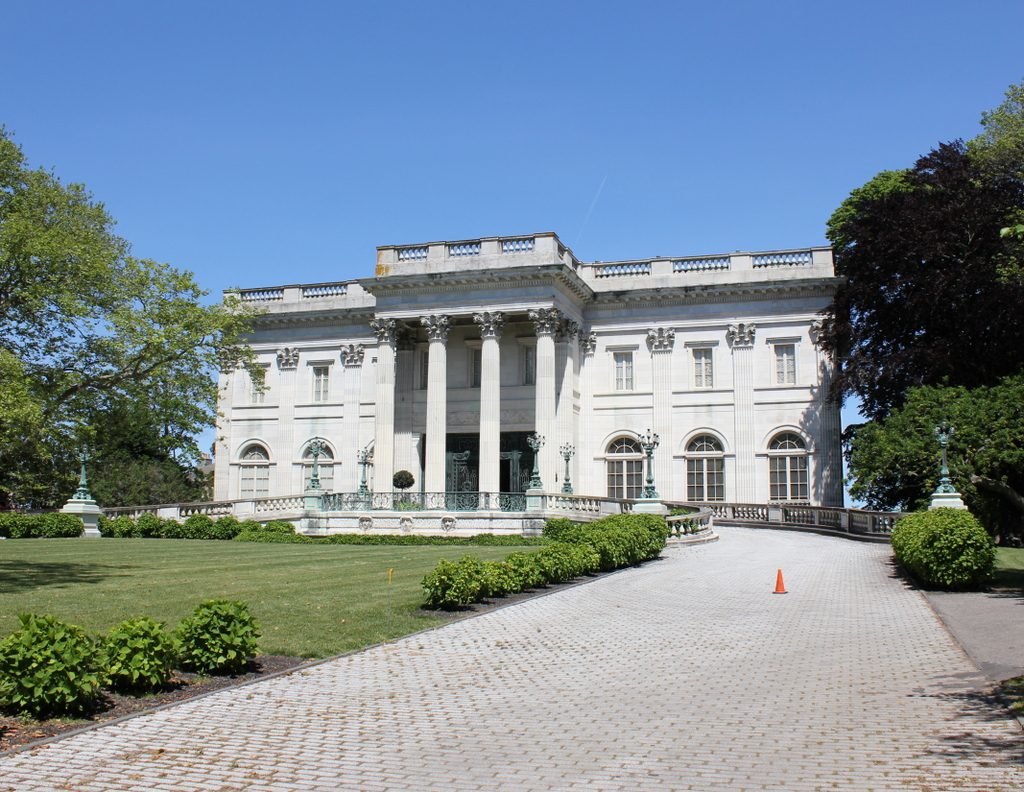 The Industrial Revolution, and the Gilded Age that followed, brought about the rise of vast personal fortunes, and perhaps no family better exemplified this than the Vanderbilts. The family’s wealth originated with Cornelius Vanderbilt, a working-class ferry operator from Staten Island who went on to become the richest man in the country through ruthlessly competitive practices in the steamboat and railroad industries. By the time he died in 1877, his estate was valued at nearly $100 million, almost all of which went to his son William.

However, despite their enormous wealth, the Vanderbilt family struggled to gain acceptance into New York society. Perceived by established New York aristocrats as being an uncouth, ill-educated member of the nouveau riche, Cornelius Vanderbilt had cared little for society’s approval, or for ostentatious displays of wealth. However, subsequent generations of the family, particularly his grandchildren, craved this acceptance, and spent vast amounts of money to attain it.

William H. Vanderbilt died in 1885, only eight years after his father, but in the interim he had managed to double his inherited wealth. It had been Cornelius’s intention to keep the family fortune intact by not dividing it between multiple heirs, but William ignored his father’s wishes and left the bulk of his $200 million estate to his two oldest sons, Cornelius Vanderbilt II and William K. Vanderbilt. As the oldest son, Cornelius received slightly more, but William inherited around $65 million, equivalent to around $1.8 billion today.

In 1875, a few years before his grandfather’s death, William K. Vanderbilt had married Alva Erskine Smith, a socially-ambitious southern belle whose family had lost much of their fortune in the aftermath of the Civil War. Once married, she wasted little time in working to bring social respectability to the Vanderbilt family. She and William built a massive Châteauesque mansion on Fifth Avenue, and held a lavish costume ball to celebrate its opening in 1883, with guests from New York’s most prominent families, including former president Ulysses S. Grant. Along with their primary residence, Alva also built a summer home, Idle Hour, on Long Island.

However, Alva’s truly lavish spending did not begin in earnest until after William inherited the $65 million from his father in 1885. The following year, she ordered the construction of a yacht, which was, of course, named the Alva. It was the largest private yacht in the world at the time, and its 285-foot length was comparable to some of the largest ships in the US Navy at the time. However, even the yacht, plus the Fifth Avenue mansion and Long Island summer home, did little to satisfy Alva, who aspired to join the many other prominent New York families who had seaside “cottages” here in Newport.

The elder Vanderbilt brother, Cornelius, had already joined Newport society, purchasing The Breakers, a large wood-framed mansion that had been built by tobacco magnate Pierre Lorillard IV in 1878. With this in mind, Alva hired architect Richard Morris Hunt to design a house that would surpass anything that had previously been built in Newport. The house was a birthday present for Alva from William, and money was no object in its design or construction. The result was a Beaux-Arts style design that was influenced by Hunt’s early years at the École des Beaux-Arts in France, and was based on both French and classical Greek architecture. Hunt was the first American to graduate from the École des Beaux-Arts, and Marble House was among the earliest examples of the Beaux-Arts style in the United States.

Named Marble House, for its prolific use of its namesake stone, the house was completed in 1892, at a cost of $2 million ($55 million today) for the structure itself, plus another $9 million ($250 million today) that Alva spent to decorate the interior. It was the finest house in Newport, and among the finest private homes in the country, but it would soon be upstaged by the other side of the Vanderbilt family. Only months after Marble House was completed, The Breakers was destroyed in a fire, and the ashes had hardly cooled before Cornelius and Alice Vanderbilt hired Richard Morris Hunt to design a new house of their own. The new Breakers was completed in 1895, becoming the ultimate symbol of Newport’s Gilded Age elegance and surpassing Marble House in every way except for the price; at $7 million it actually cost significantly less to build.

Notwithstanding William’s $11 million birthday gift to Alva, their marriage was not happy. In 1895, only three years after Marble House was completed, Alva divorced William, citing infidelity. At the time, such extramarital dalliances were certainly not unheard of among wealthy men, and were passively tolerated by New York society, but divorces were considered to be major scandals. Despite this, though, Alva retained her prominence in society, and also received a significant settlement in the divorce, including ownership of Marble House.

In the same year as her divorce, Alva’s oldest child, Consuelo, married Charles Spencer-Churchill, the Duke of Marlborough. Alva had long envisioned Consuelo marrying a member of the European nobility, in order to solidify the family’s social status. In that regard, the marriage was a success for both parties, with the cash-poor Duke of Marlborough receiving a sizable dowry, while Vanderbilts now had a duchess for a daughter. However, Consuelo’s marriage was as loveless as her parents’ had been, and she and the duke separated in 1906 and divorced in 1921.

In the meantime, Alva remarried in 1896 to Oliver Hazard Perry Belmont, a prominent New York banker whose Newport home, Belcourt Castle, was located nearby. After his death in 1908, Alva was in possession of two Newport mansions, and retained ownership of both until 1932, when she sold Marble House shortly before her death the following year. By this point, Newport’s ostentatious Gilded Age mansions had fallen out of fashion, and she sold the house to Frederick H. Prince for just $100,000, less than one percent of its original construction costs 40 years earlier.

Frederick H. Prince was a stockbroker from Boston, and he owned Marble House for over 20 years, until his death in 1953. A decade later, his family sold the property to the Preservation Society of Newport County, who purchased it with funds provided by William and Alva’s youngest child, Harold, who was nearly 80 years old at the time. Today, very little has changed in the house’s exterior appearance, and it is still owned by the Preservation Society, which operates it as a museum along with several other Newport “cottages,” including The Breakers. Because of their historical and architectural significance, both of these iconic Vanderbilt homes are now designated as National Historic Landmarks, and they are both part of the Bellevue Avenue Historic District.