The southeast corner of Pelham and Mill Streets in Newport, around 1885. Image courtesy of the Providence Public Library. 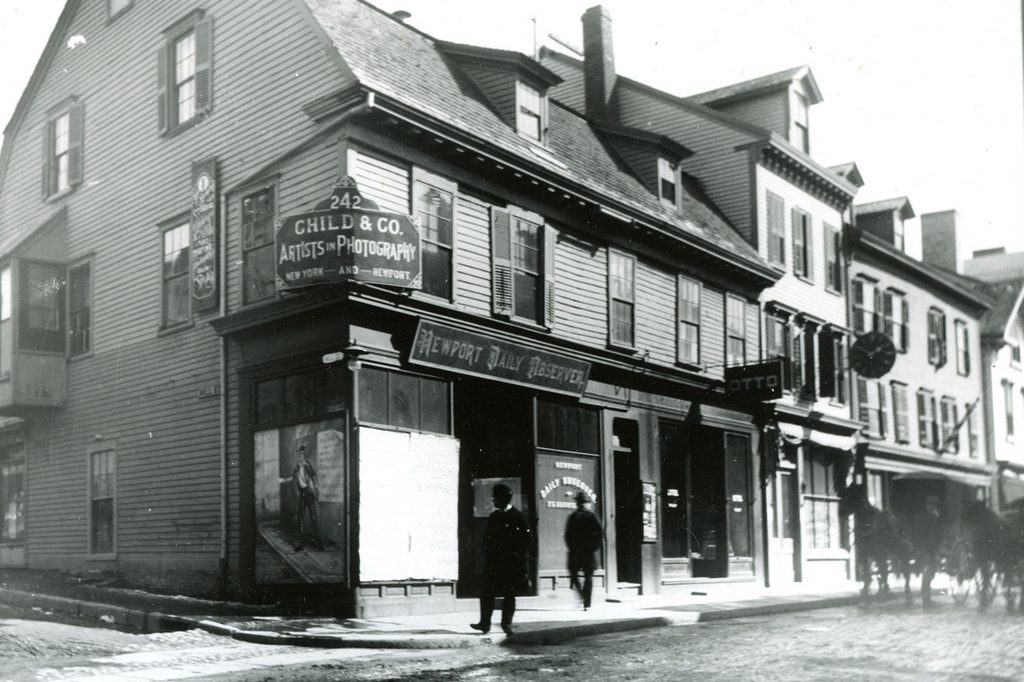 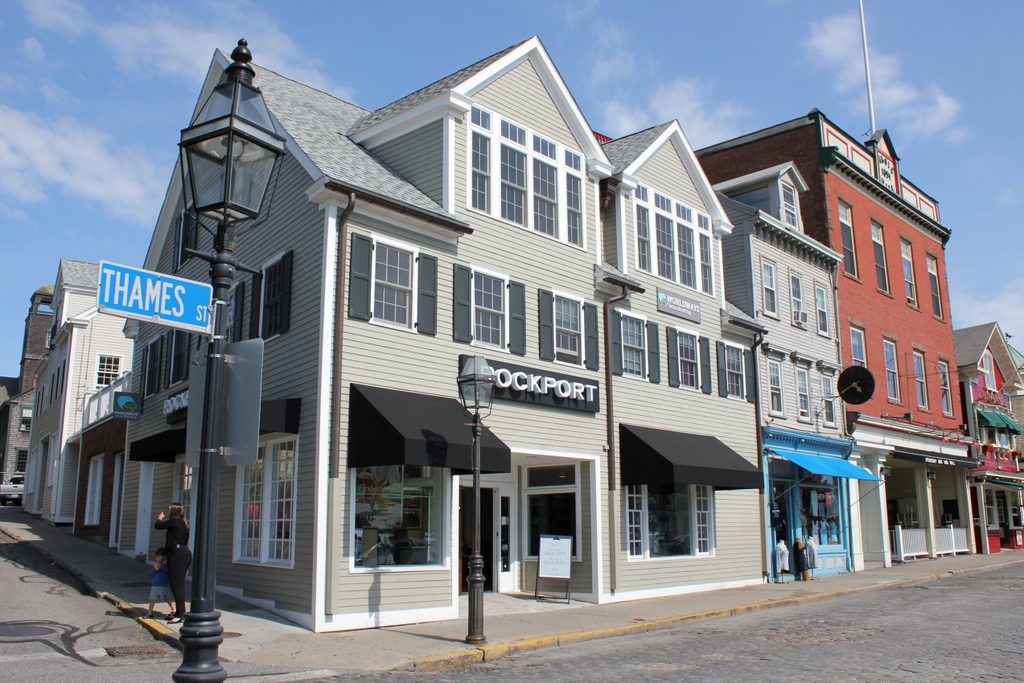 The first photo shows a mix of old, wood-frame commercial buildings on the east side of Thames Street, just south of Mill Street. The building on the left may have been the oldest in the scene, and probably dated back to the mid or late 18th century, with a large gambrel roof that commonly seen in Newport buildings of this era. It may have originally been built as a house, but by the time the first photo was taken it housed a variety of businesses, including the Newport Daily Observer newspaper, which had its offices in the storefront on the left side, and Edward Otto’s tailor shop, which was located on the right side. At the corner of the building, there is also a large sign for Child & Co. photographers, which had their studios here in the building.

Just to the right is a tall, narrow commercial building with a large clock hanging from the second floor. According to the National Register of Historic Places inventory, it was built sometime between 1741 and 1758, but was renovated in the 1850s. It does not seem clear how much is left from the original 18th century structure, but it was likely a single-family home that, like many other colonial-era Thames Street buildings, was converted into commercial space in the mid-19th century. By the 1860s, the ground floor of the building was the site of H.W. Pray’s watchmaking and jewelry business, and in 1873 the business was acquired by Edwin C. Blaine. He was still running the business here when the first photo was taken, and the watch sign became a longtime feature here on Thames Street.

To the right of Blaine’s store was another old commercial building that probably dated to the 18th or early 19th century. The building is too far from the camera to read any signs, but city directories of the mid-1880s show that it was the home of Richard Swan’s piano and organ business. However, the old building was demolished soon after the first photo was taken, and in 1894 it was replaced by the current three-story brick building. Known as Music Hall, it was owned by liquor dealer Dennis W. Sheehan, and early tenants included James A. Eddy’s grocery store and William H. Hilton’s hairdresser shop.

Of the three buildings in the first photo, only the Blaine building in the middle is still standing. Blaine operated his shop here until his death in 1904, and his son Joseph W. Blaine subsequently took over the jewelry business. He would run it for nearly 50 years, before finally selling it in 1952, a year before his own death. The store would remain here for many more years, still bearing the Blaine name, before finally closing sometime in the 1970s, after more than a century in business. However, the building is still there, with an exterior that is essentially unaltered. Even the storefront is mostly unchanged, and a large clock still hangs from the second floor, as a reminder of the watch and jewelry business that was once here.