Looking south on Thames Street toward the corner of Pelham Street in Newport, around 1885. Image courtesy of the Providence Public Library. 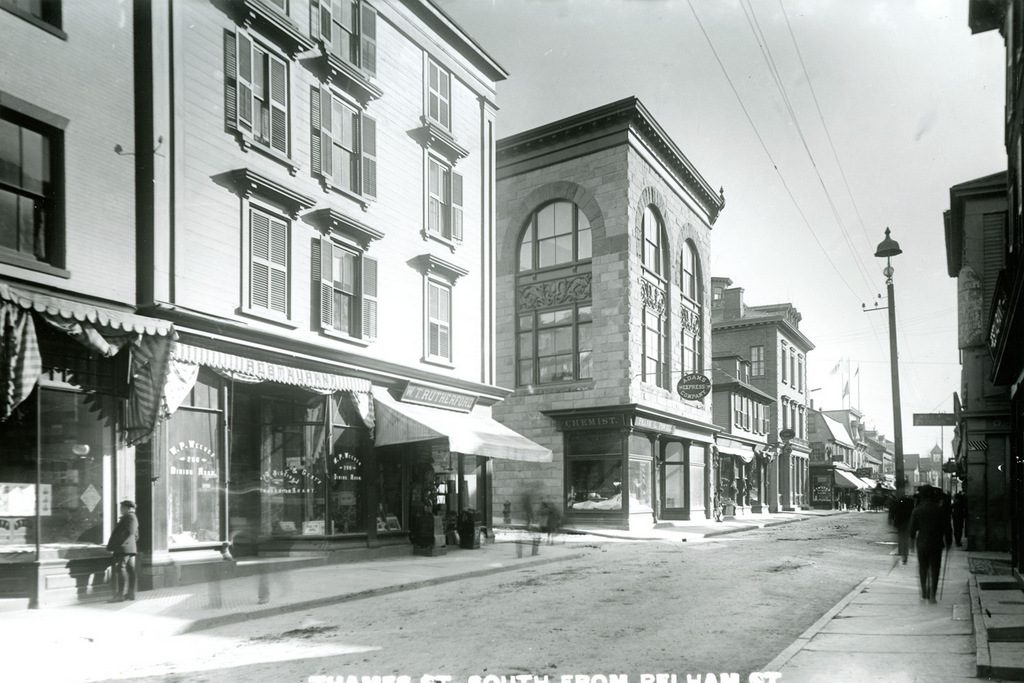 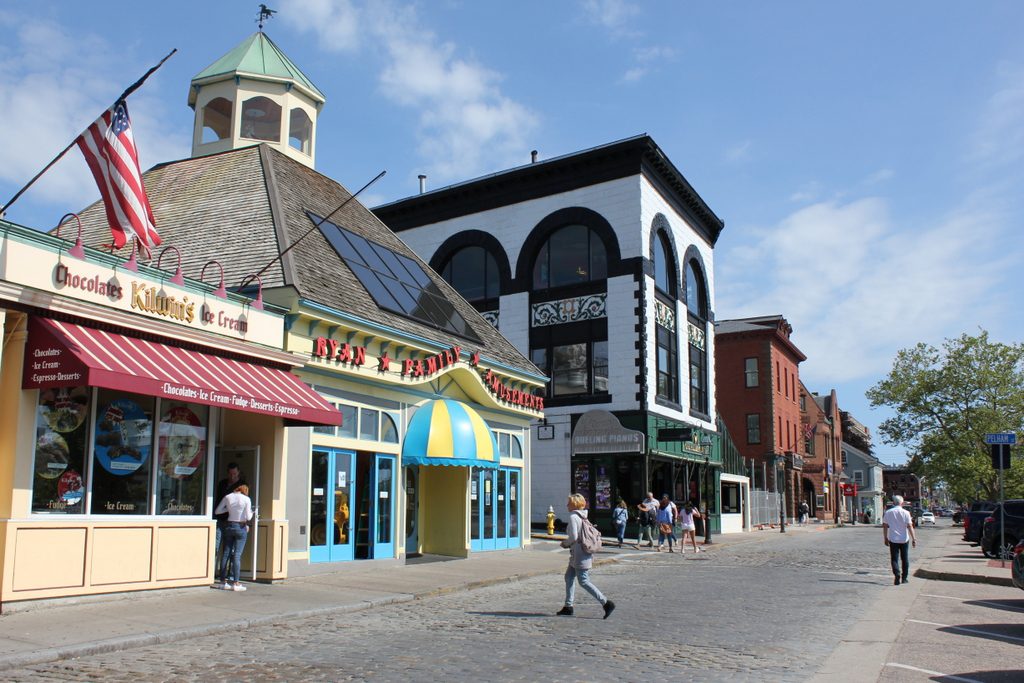 The scene in the first photo shows a mix of commercial buildings on the east side of Thames Street, from the corner of Pelham Street to Green Street a block away in the distance. Starting on the left side is the United States Hotel, which is explained in further detail in a previous post. Built in 1836 on the site of the earlier Townsend’s Coffee House, it was one of Newport’s leading hotels of the mid-19th century, and in the first photo the building also housed William P. Weeden’s “Ladies & Gent’s Restaurant” on the left and William T. Rutherford’s cigar shop on the right.

In the middle of both photos is the Newton Building, which is also explained in more detail in a previous post. This Romanesque-style commercial block was built a few years before the first photo was taken, and housed several businesses including the Adams Express Company and Frank L. Powell’s pharmacy. Just beyond the Newton Building, in sharp architectural contrast, was an 18th century house that had been converted into commercial use around the mid-19th century. It had been the childhood home of Elizabeth Champlin Mason, and it was where, in 1811, she married Oliver Hazard Perry, the Newport native who would later achieve fame as a naval hero in the War of 1812.

To the right of the former Mason house is the brick, three-story Savings Bank of Newport Building. The bank had been established in 1819, and occupied several different locations before this building was completed in the mid-1870s. When the first photo was taken, the building also housed the Aquidneck National Bank. However, in the early 1890s this bank moved across Green Street to the newly-built Kinsley Building, a two-story, Romanesque-style stone building that can be seen in the distance of the 2017 photo.

In more than 130 years since the first photo was taken, Thames Street has undergone some dramatic changes, most notably in the late 1960s when all of the buildings on the right side of the street were demolished to build America’s Cup Avenue parallel to Thames Street. Some of the older buildings on the left side have also been demolished or altered beyond recognition, including the United States Hotel. It closed in 1918, and sat vacant for the next 15 years until the top three floors were removed in 1933. The current building on the site appears to be the surviving first floor of the United States Hotel, although there are no recognizable details left from the first photo.

Further in the distance, the Mason house was demolished in the late 1950s to build a parking lot, but the two late 19th century buildings on either side of it – the Newton Building and the Savings Bank of Newport Building – are still standing, with few significant exterior alterations. Although built a few years after the first photo was taken, the Kinsley Building is also still there, and all three of these buildings are now part of the Newport Historic District, a National Historic Landmark district that was established in 1968, encompassing much of Newport’s historic downtown area.