The house at 115 High Street in Springfield, on July 27, 1938. Image courtesy of the Springfield Building Department. 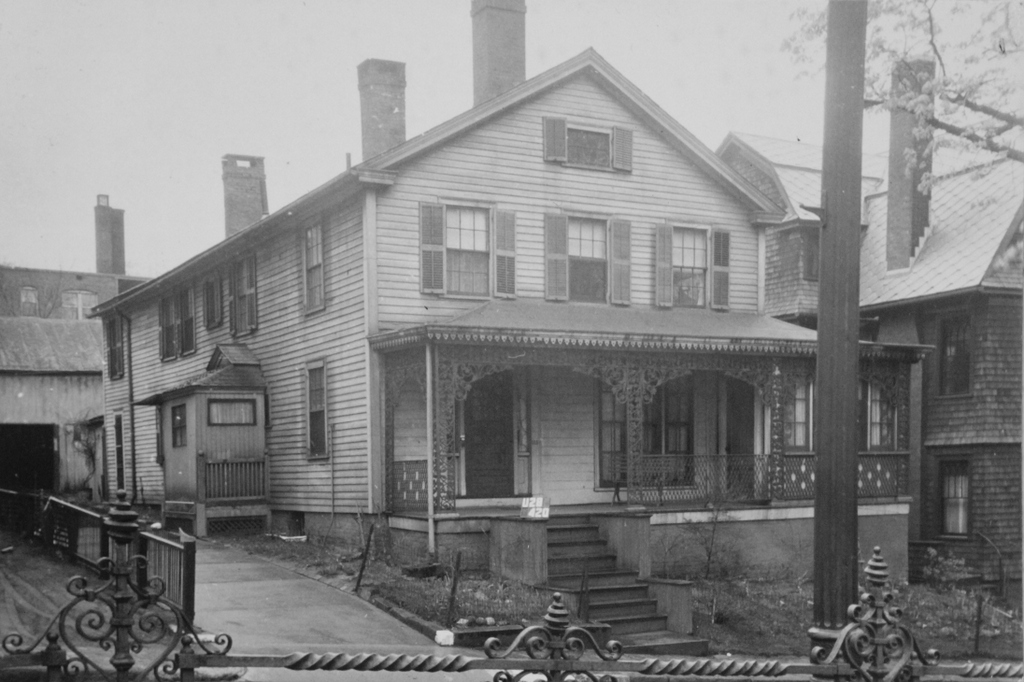 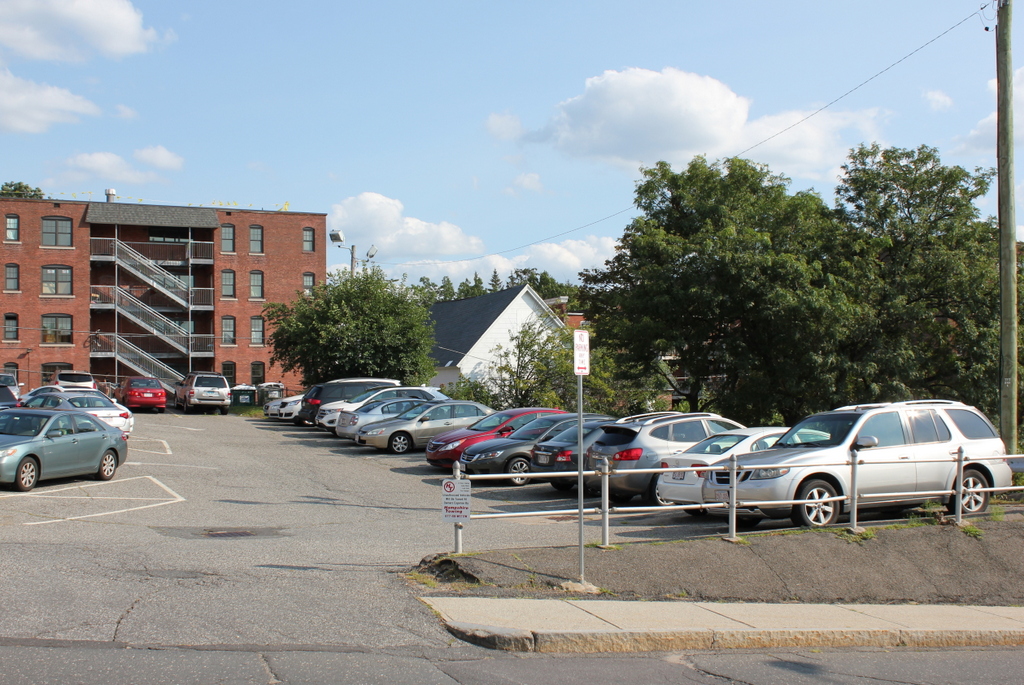 During the mid-19th century, this house was the home of author Josiah Gilbert Holland, a noted historian, novelist, poet, and editor who lived in Springfield for much of his literary career. Holland was born in 1819 in Belchertown, Massachusetts, and was an 1844 graduate of the Berkshire Medical College. He moved to Springfield after graduating, where he married his wife, Elizabeth Chapin, and briefly practiced medicine. However, he soon abandoned the profession and turned to writing. He published a weekly newspaper, the Bay State Courier, for six months in 1847, but he and Elizabeth subsequently moved to the south, where he worked as a teacher in Richmond and as superintendent of schools in Vicksburg. He had little professional experience for the latter position, and Vicksburg had little in the way of public schools, but Holland was able to establish a system that was based on public education in northern states.

Holland served as superintendent in Vicksburg for a year and three months, but he and Elizabeth returned to Springfield in the spring of 1849, in order to care for her dying mother. Here, Holland resumed his journalistic career, after Springfield Republican editor Samuel Bowles hired him as an assistant editor of the newspaper. During the early 1850s he wrote History of Western Massachusetts, which was originally printed in the newspaper in serial format before being published in a two-volume book in 1855. The following year, Holland was the keynote speaker at the dedication of the old city hall at Court Square, where he gave an hour-long speech that, among other things, criticized the city’s lack of noteworthy architectural works. He objected to the designs of public buildings as well as private homes, and noted that “a common horse-block has just as many, and just the same, architectural ideas in it” as an entire street full of the city’s finest homes.

Around the time that he gave this speech, though, Holland lived here in this very modest Greek Revival-style home, which had very little architectural distinction of its own. The house was likely built sometime in the late 1830s or 1840s, during the time when this style was common for houses in Springfield. It does not appear in the 1835 map, but it was in existence by 1851, when that year’s map shows it as being owned by an A. Howe. Josiah and Elizabeth Holland likely moved into the house a few years later, and at some point it came to be known as “Buff Cottage.” By the 1860 census the Hollands were living here with their young children Annie, Katie, and Theodore, plus two servants. At the time, the value of Holland’s real estate was listed at $9,000, plus a personal estate of $13,000, for a total net worth equal to about $600,000 today.

During the time that Holland lived in this house, his literary career gained him national attention. His first novel was The Bay Path, a work of historical fiction that was set in early Springfield. It was published in 1857, and was followed a year later by the long narrative poem Bitter Sweet, which was written here in this house. This poem would become one of his most popular works, and was described in 1894 by biographer Harriette Merrick Plunkett as “Dr. Holland’s reflections on the mysteries of Life and Death, on the soul-wracking problems of Doubt and Faith, on the existence of Evil as one of the vital conditions of the universe, on the questions of Predestination, Original Sin, Free-will, and the whole haunting brood of Calvinistic theological metaphysics.” She declared it to be “truly an original poem,” comparing it to the works of Robert Burns or Sir Walter Scott, and cited the praise that it had earned from poet James Russell Lowell. However, the poem, along with many of Holland’s other works, also received its share of criticism from those who found his writing style to be excessively sentimental and moralistic.

Holland’s other works during this period included three collections of essays, Letters to Young People, Single and Married (1858), Gold Foil, Hammered from Popular Proverbs (1859), and Letters to the Joneses (1863), all of which were published under the pseudonym Timothy Titcomb. In 1860, he wrote his next novel, Miss Gilbert’s Career: An American Story, which highlighted the Victorian belief that a woman’s greatest career was to be a wife. The Civil War started a year later, and Holland’s editorial duties at the Republican consumed much of his time throughout the war. He even became the de facto editor-in-chief of the newspaper during part of the war, taking on these responsibilities during Samuel Bowles’s overseas trip to Europe.

As Holland became a more established literary figure, he put some of his newfound wealth into building a new house that was both much larger and more architecturally prominent than his home here on High Street. It was completed in 1862, and was located in the northwestern corner of the city, near the border of Chicopee, on what is now Atwater Terrace. At the time, this part of the city was far removed from the city center and only sparsely populated, so Holland’s choice of a location was puzzling to some. One person is even reported to have questioned “Who would ever want to live there, except some hare-brained poet like Dr. Holland?” The design of the house was unique among the many 19th century mansions in Springfield, featuring a Swiss Chalet-style design, and it was named “Brightwood” because of its painted wooden exterior. This name would later be applied to the entire northwestern corner of the city, and today the neighborhood is still known as Brightwood.

The Holland family would only live at Brightwood for five years, before embarking on a two-year vacation to Europe and then relocating to New York City, but Holland wrote several of his best-selling books while living here in this house. Perhaps the most notable work of his career was Life of Abraham Lincoln, which was published in 1866. A year earlier, Holland had been asked to give a eulogy of Lincoln at a memorial service here in Springfield, held just four days after his assassination. The eulogy proved powerful, and just a month later Holland was traveling to Springfield, Illinois to research Lincoln’s life.

The resulting book was the first lengthy biography of the 16th president, and sold around 100,000 copies. It was one of many such biographies that were published soon after Lincoln’s assassination, most of which were poorly written, but Holland’s book is generally considered to have been the best of these. As described by Allen C. Guelzo in the Journal of the Abraham Lincoln Association, Holland’s book was “a landmark Lincoln biography, the first of any substantial length as a biography, the first with any aspirations to comprehensiveness,” and “the first life of the ‘inner Lincoln,’ setting the stage for a genre of Lincoln studies that remains compelling and fruitful to this day.”

After moving to New York, Holland became one of the founders and the first editor of Scribner’s Monthly, which later became The Century Magazine. He continued his role as both editor and author throughout the 1870s, alternating between publishing novels and volumes of poetry. His final book was The Puritan’s Guest, a collection of poems that was published in 1881. He died on October 12 of that year, at the age of 62, and his body was returned to Springfield, where he was interred in Springfield Cemetery, just a short walk from where he once lived here on High Street.

In the meantime, at some point during the 1860s the house here on High Street was sold to Timothy Henry, a livery stable owner who lived here for many years with his wife Julia. He died in 1883, but Julia continued to live here until her death in 1900, more than 30 years after she and Timothy moved into the house. Following her death, however, the house went through a series of owners and residents throughout the early 20th century. It steadily declined until, when the first photo was taken in 1938, it was being used as a lodging house. The 1940 census shows that it was being rented for $50 a month by Elizabeth Cody, a 64-year-old widow. She, in turn, rented space to two young women, one of whom worked as a bank clerk while the other was a stenographer.

By the time the first photo was taken, the once-famous resident of the house had long since been forgotten. Although ridiculed by many within the literary community during his lifetime, Holland had nonetheless been popular with the general public throughout the late 19th century. However, by the turn of the 20th century his overly sentimental, melodramatic style and Victorian-era moral lessons had fallen out of fashion, and his works drifted into obscurity.

Ironically, it was a reclusive friend and correspondent of Holland – the Amherst poet Emily Dickinson – who would go on to achieve lasting fame as the area’s preeminent 19th century poet. She died only five years after Holland, having had just a few poems published in her lifetime, yet her posthumously-published work eventually established her place within the Western canon of literature. This proved the exact opposite of Holland’s fame and reputation, who in 1940 was dismissed by biographer Harry Houston Peckham as “the major prophet of the unsophisticated, the supreme apostle to the naive.”

Holland’s two former homes in Springfield did not fare much better than his literary legacy. This house on High Street was evidently still standing as late as the 1960s, since the address was listed in city directories of the period, but at some point in the late 20th century it was demolished and replaced with a parking lot for the Wesson Memorial Hospital, which is located across the street from where the house once stood. However, this house ultimately outlived Holland’s grand Brightwood mansion on Atwater Terrace. After moving to New York, Holland had sold it to industrialist George C. Fisk, and the property remained in the Fisk family until well into the 20th century. It eventually fell victim to the Great Depression, though, and proved too costly for the few surviving family members to maintain, so it was finally demolished in 1940.