Derby Square from Front Street in Salem, with the Old Town Hall on the right side, around 1865-1885. Image courtesy of the New York Public Library. 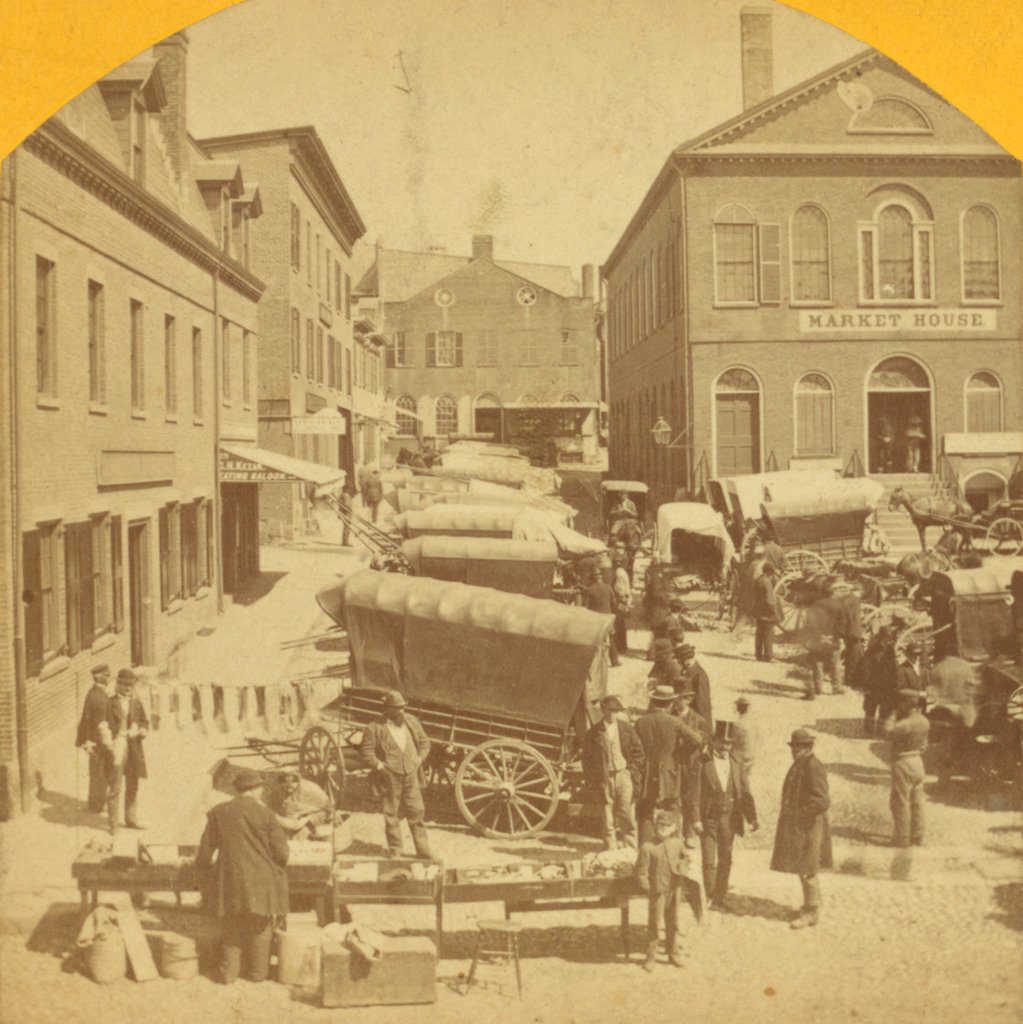 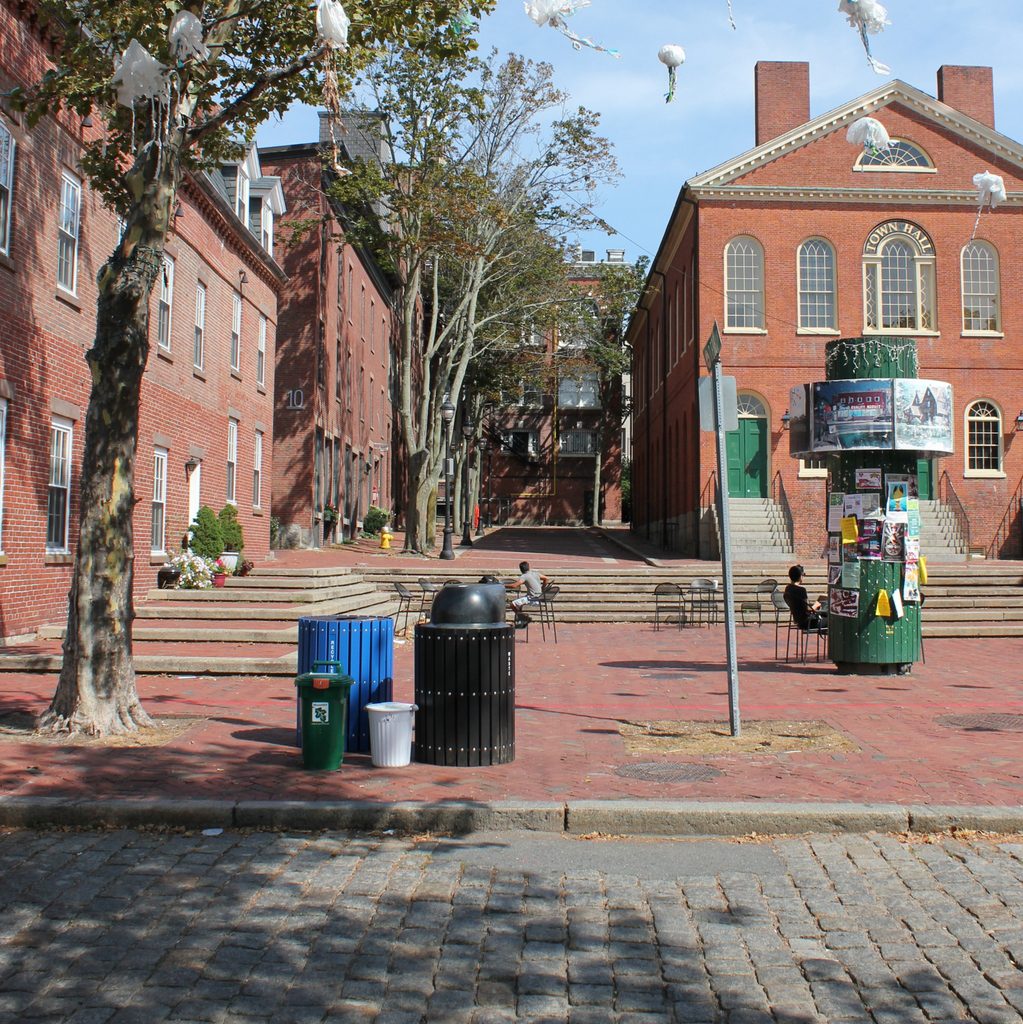 Derby Square is a small plaza in the center of Salem, and it is named for the prominent Derby family, which once owned the land here. Elias Hasket Derby (1739-1799) was a prosperous merchant and among the richest men in New England, referred to by Nathaniel Hawthorne in The Scarlet Letter as “King Derby.” During the 1790s, Derby had an elegant mansion built here on the site. It was designed by noted architect Charles Bulfinch and was completed in 1799, but Derby died later that year and the property was inherited by his son, Elias Hasket Derby, Jr. However, the younger Derby had little interest in paying the high costs to maintain the house, and it sat abandoned for some time before finally being demolished in 1815.

After demolishing the house, Derby sold the property to his brother, John Derby III, and his brother-in-law, Benjamin Pickman, Jr. The following year, they donated the property to the town of Salem, in order to build a new town hall on the site of the mansion. Construction began later that year, and was completed in 1817. It was built of brick, with an elegant Federal-style exterior, and there is some speculation that it may have been designed by Charles Bulfinch. Like many New England municipal buildings of the era, it was designed as a multi-use building, with a public market on the first floor, and a meeting hall and town offices on the upper floor. The basement also had commercial tenants, including a restaurant that was housed here during the early 19th century.

The first event held in the meeting hall was a reception for President James Monroe, who visited Salem in July 1817 during a tour of the New England states. At the time, Salem was at the peak of its prosperity as a major trading port. It was the tenth-largest city or town in the country during the 1820 census, and the second-largest in New England after Boston. However, it was still technically a town at the time, with a town meeting form of government, and this building continued to be used as the town hall until 1836, when Salem was incorporated as the second city in the state, just 14 years after Boston became the first city.

The municipal government moved into the new city hall, which was completed on Washington Street in 1837, and this building remains in use today. By this point, though, Salem’s once-prosperous shipping industry was in decline, and the city saw slow population growth throughout most of the 19th century. Salem never again ranked among the ten largest cities in the country, and now it is no longer even one of the ten largest in the state. However, this early prosperity, followed by many decades of stagnation, has resulted in the preservation of a remarkable number of historic buildings. Today, while Salem is best-known for its infamous witch trials, the city also boasts hundreds of historic buildings from the 17th, 18th, and 19th centuries, including many of the buildings here at Derby Square.

Although Salem’s government moved out of the upper floor of the old town hall in the 1830s, the first floor continued to be used as a public market for many years. It was known as the Market House, as shown by the sign in the first photo, and had stalls for a number of merchants, most of whom sold food. The 1869 city directory lists a fruits and vegetable dealer, a butter and cheese dealer, plus five tenants whose business was described simply as “provisions.” As seen in the first photo, the area in front of the building was also used as a marketplace, with dealers selling goods from their wagons.

The old town hall continued to be used as a market into the 20th century. Although threatened by demolition, it was ultimately preserved following an extensive renovation from 1933-1934. The first floor was completely remodeled, and the old market stalls were replaced with office space for a variety of city offices. The “Market House” sign was removed, and the building became known as the “Old Town Hall,” despite having served in that function for just two decades. Despite the changes on the first floor, though, the old meeting hall on the upper floor has remained largely the same, and continues to be used as a venue for many different functions.

Today, aside from the sign, the exterior of the building has seen few changes since the first photo was taken, and most of the other neighboring buildings have also been preserved. The first floor of the old town hall is no longer used for city offices, and is instead an art exhibition space, but the area in front of the building on Derby Square is still used for its original purpose. Although it was empty when the 2017 photo was taken, the square is the site of a weekly farmers’ market during the summer, plus a monthly flea market that runs from May through September.