Looking southwest on Canal Street, toward the corner of Lyman Street in Holyoke, in 1936. Image taken by Lewis Hine, courtesy of the U. S. National Archives. 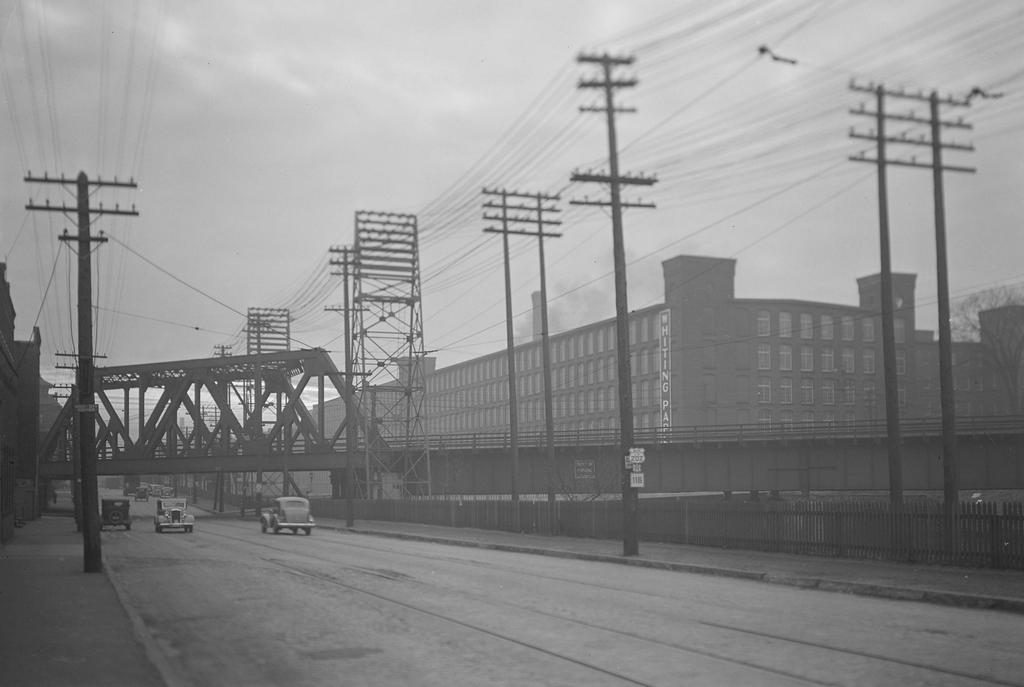 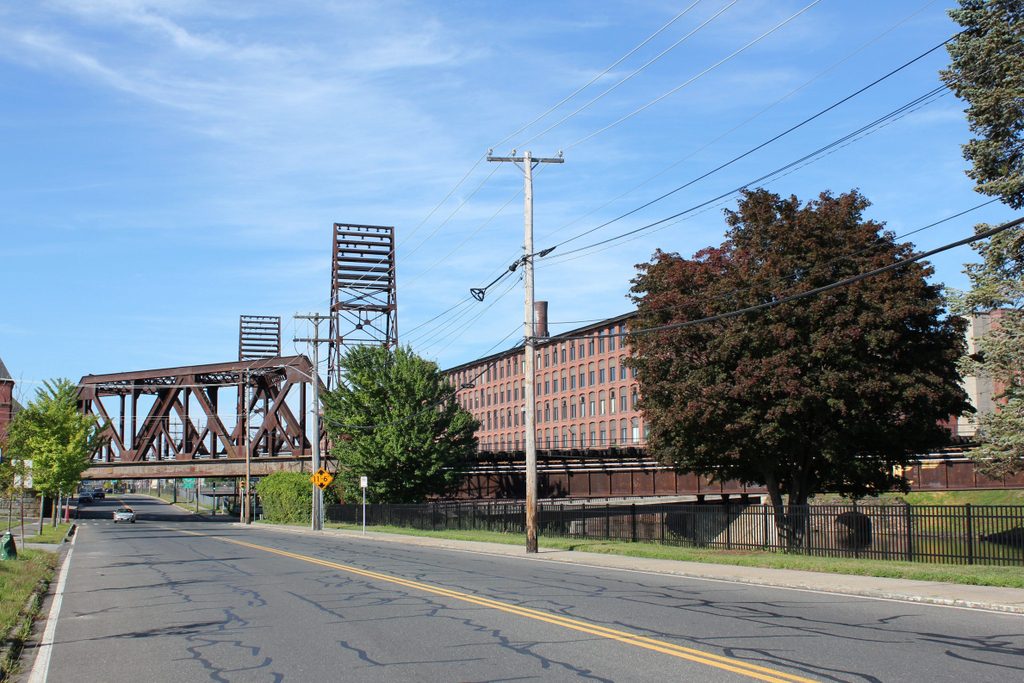 The first photo was taken by the prominent photographer and social reformer Lewis Hine, who is best known for his early 20th century work with the National Child Labor Committee. However, later in life he also documented life across the country during the Great Depression, including a visit to Holyoke in 1936. At the time, the city was a leading producer of paper and textiles, and most of his photos focus on Holyoke’s industry. This photo shows the scene along Canal Street, with the Second Level Canal on the right. The Boston and Maine Railroad crosses through the middle of the photo, and in the background is the Whiting Paper Company, which was located in a building that had previously been occupied by the Lyman Mills. Hine’s original caption provides a short description of the photo:

Mt. Holyoke [sic], Massachusetts – Scenes. An old mill of absentee ownership, liquidated and sold at a great bargain to a new owner, who would not sell or rent, uses only a small part; railway transportation; electric power transmission. Lyman Mills (Now Whiting Company), 1936

The Lyman Mills company was incorporated in 1854, in the early years of Holyoke’s industrial development. It was located in the area between the First and Second Level Canals, on the south side of Lyman Street, and over the years its facility grew to include a number of mill buildings. The earliest of these, not visible from this angle, were built in 1849-1850, and were originally used by the Hadley Falls Company before being acquired by Lyman Mills. Other buildings, including the large one in the distance on the right side of the scene, were added later in the 19th century, and the company became a major producer of textiles. It also employed a significant number Holyoke residents, including many of the city’s French Canadian immigrants, and by the turn of the century it had a workforce of over 1,300 people.

However, as Hine’s caption indicates, the Lyman Mills corporation was liquidated in 1927. Although still profitable despite increased competition from southern manufacturers, the shareholders were evidently more interested in selling the company’s assets instead of continuing to operate it as a textile mill. Over a thousand employees were put out of work on the eve of the Great Depression, and the property was sold to the Whiting Paper Company, whose original mill was located directly adjacent to the Lyman Mills complex.

Founded in 1865 by William Whiting, this company went on to become one of the largest paper manufacturers in the country, and Whiting enjoyed a successful political career as mayor of Holyoke and as a U. S. Congressman. After his death in 1911, his son, William F. Whiting, took over the company and oversaw the expansion into the former Lyman Mills buildings in the late 1920s. The younger Whiting was a longtime friend of Calvin Coolidge, and in August 1928 Coolidge appointed him as the U. S. Secretary of Commerce, replacing Herbert Hoover, who would be elected president a few months later. Whiting served in this role for the remainder of Coolidge’s presidency, until Hoover’s inauguration on March 4, 1929.

The conversion of the Lyman Mills into paper production, along with Whiting’s brief tenure as Secretary of Commerce, occurred just a short time before the stock market crash of October 1929. By the time the first photo was taken seven years later, the country was still in the midst of the Great Depression. Like the rest of the country, Holyoke was hit hard by the Depression, but the Whiting Paper Company managed to survive and remain in business for several more decades. However, Holyoke continued to see economic decline throughout the mid-20th century, with most of its major manufacturers closing or relocating, and the Whiting Paper Company finally closed in 1967, just over a century after it had been established.

Today, however, this scene has hardly changed in more than 80 years since Lewis Hine took the first photo. Although no longer used to produce textiles or paper, the Lyman/Whiting complex is still standing in the distance, and has been converted into a mixed-use property known as Open Square. Closer to the foreground, the same railroad bridges still carry the tracks over Canal Street and the Second Level Canal, and even the transmission towers are still standing, although they do not carry any electrical wires anymore.