Looking south from the Dwight Street bridge over the Second Level Canal in Holyoke, around 1892. Image from Picturesque Hampden (1892). 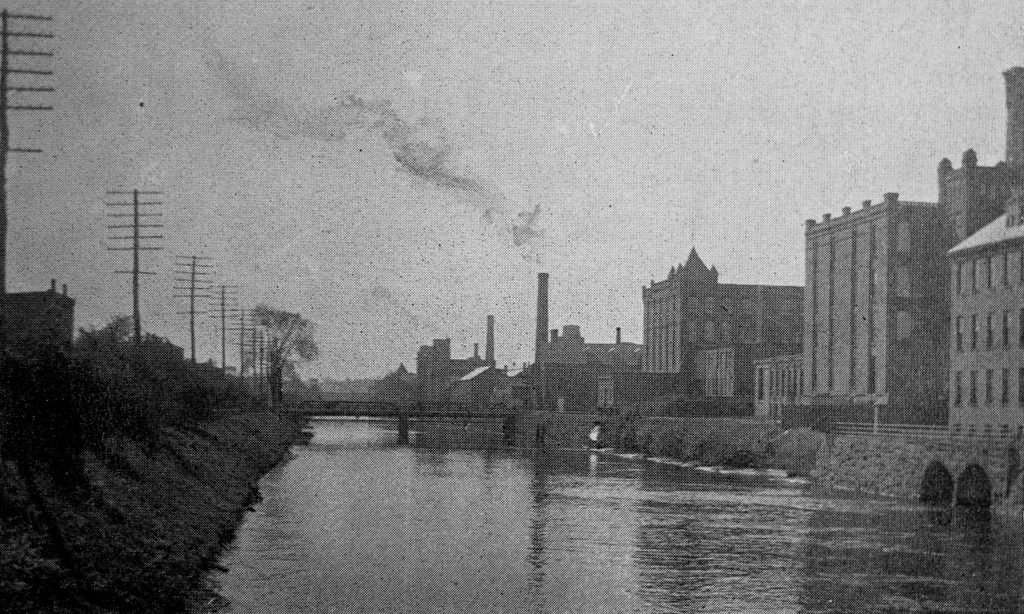 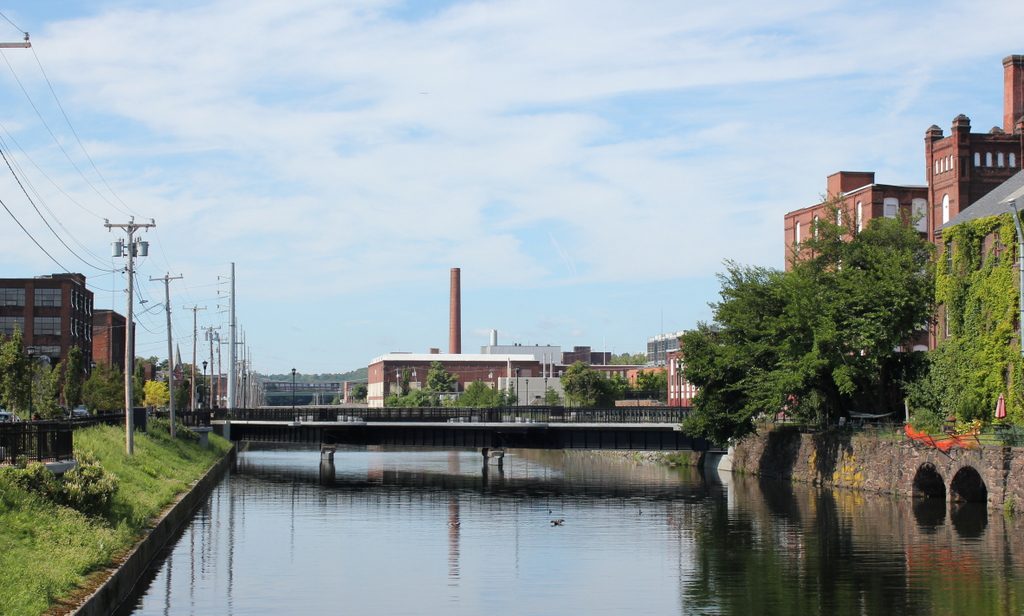 Holyoke’s extensive canal system was developed starting in the mid-19th century, and provided water power for the many factories that were built here. By the time the first photo was taken in the early 1890s, the city was at its peak of prosperity as a manufacturing center, and the Second Level Canal was lined with industrial development along the right side. These included, on the extreme right side of the photo, the Beebe & Holbrook Paper Company, one of the city’s many paper mills. Just beyond it were two matching factory buildings of the Merrick Thread Company, and further in the distance, on the other side of Appleton Street, was a mix of smaller industrial buildings owned by a variety of companies.

Only a small portion of the Beebe & Holbrook mill is visible in this scene, but it was built in 1871-1872 as the Hampden Paper Company. It subsequently became Beebe & Holbrook in 1878, and in 1899 it was one of the many paper mills that merged to become the American Writing Paper Company. Each mill, including Beebe & Holbrook, continued to operate as a division within American Writing Paper, and at one point this trust combined to produce 75 percent of the country’s fine paper. Poor management and perennial labor troubles ultimately helped bring about the company’s demise in the mid-20th century, and its assets were liquidated in the 1960s. However, many of its former mills, including Beebe & Holbrook, are still standing in Holyoke today.

Further in the distance, the Merrick Thread Company buildings were somewhat newer than the neighboring paper mill. The company came to Holyoke in 1865, and in 1882 it built mill number 2, which is visible in the distance on the right side. Five years later, it was joined by the architecturally-similar mill number 3, closer to the foreground and directly adjacent to the paper mill. The book Holyoke To Day: Penned and Pictured, published in 1887, provides a description of the company around the time that mill number 3 was completed:

Silk cord, soft finish, satin finish spool cottons and fine yarns are made, the value of the yearly product being a million dollars or more. About 4,000,000 dozen spools of cotton are made during the year. Over 1,100 hands are employed, and these receive upwards of $26,000 per month. The furnishing of a thread and bobbin fitted for use in the shuttle of a sewing machine, thus avoiding the necessity of fitting the iron bobbin in the usual way, has grown to be quite an important branch of the business, which this company controls under contract with the patentee.

Like Beebe & Holbrook, the Merrick Thread Company was later absorbed by a trust when it was acquired by the American Thread Company in 1902. Then, at some point in the 20th century, the facility received a direct rail link when a railroad bridge was built diagonally across the canal, as seen in the present-day photo. However, like most of Holyoke’s other industries from the 19th and early 20th centuries, the company has since gone out of business.

The buildings later housed other companies, although mill number 2 was destroyed by arson in 1993, and the site on Appleton Street is now a vacant lot. Mill number 3 is still standing, behind the trees on the right side of the present-day photo, but its windows are boarded up and it appears to be vacant. Overall, the only significant improvement to this scene has been the conversion of the railroad bridge into a pedestrian walkway in 2015, and it is now part of the Holyoke Canal Walk.