Vanderbilt Hall, seen from Chapel Street on the campus of Yale University in New Haven, around 1901. Image taken by William Henry Jackson, courtesy of the Library of Congress, Detroit Publishing Company Collection. 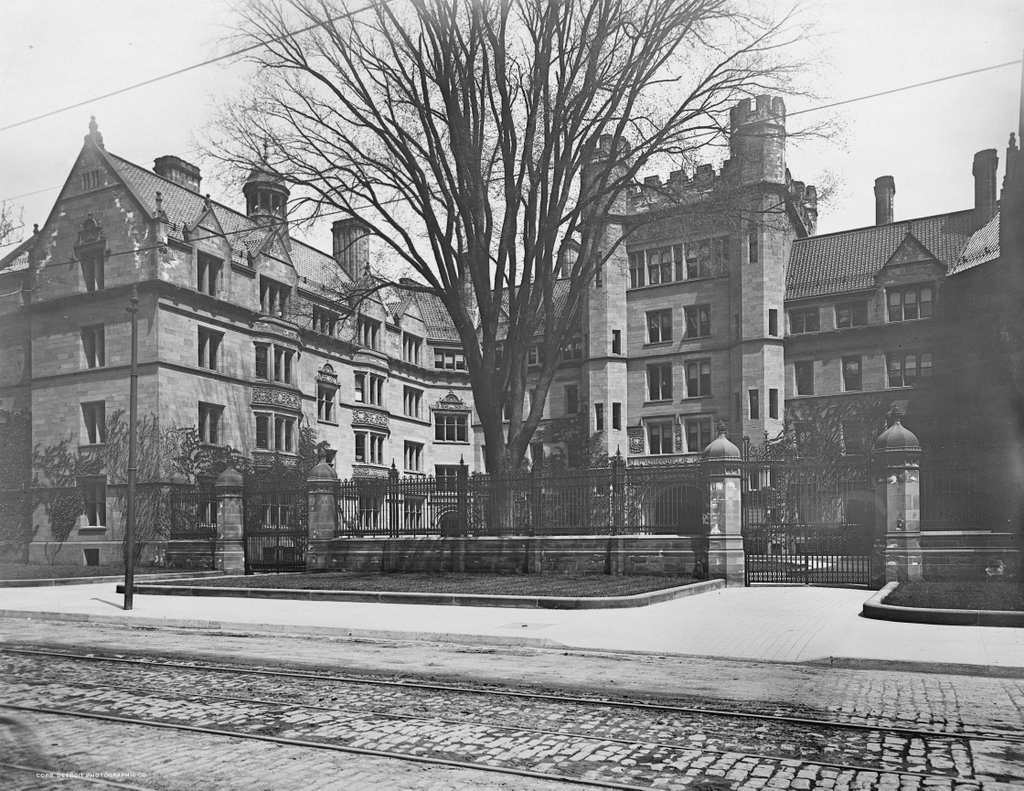 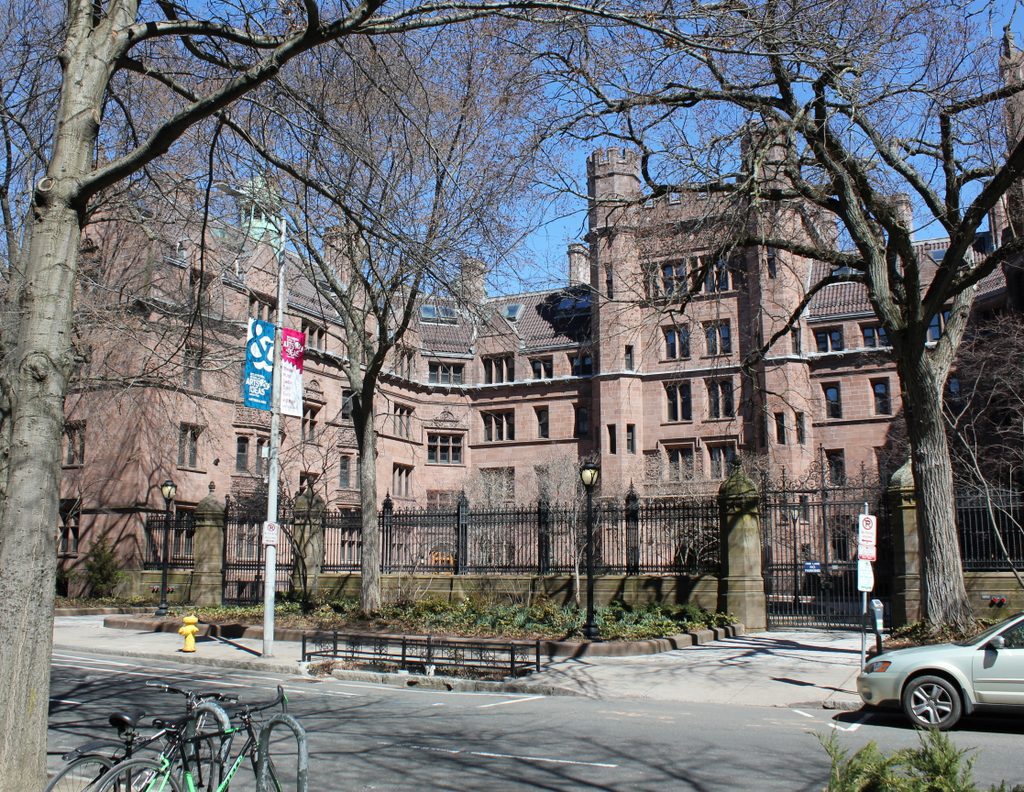 Vanderbilt Hall was completed in 1894, and is named for William H. Vanderbilt II, who died of typhoid fever in 1892, while he was a student here at Yale. He had been the oldest son of Cornelius Vanderbilt II, who donated this four-story dormitory to the school in honor of his son. At the time, it was one of several expensive building projects that Vanderbilt was undertaking, which included a massive expansion of his Fifth Avenue home in New York City, and the construction of The Breakers in Newport. As was the case in these other two projects, Vanderbilt spared no expense in this dormitory. It was built at a cost of about a million dollars – nearly $30 million today – and was designed by noted architect Charles C. Haight, who designed many buildings at Yale and in New York City.

Upon its completion, it was hailed by the Springfield Republican as “The costliest and most magnificent college dormitory in America,” and the newspaper provided a glowing description of the building’s interior:

The halls are spacious, circular in plan, and the staircases are of iron and marble. On entering the hallways, one finds the walls lined with white enameled brick, while the iron stairs have marble footsteps and an artistic railing with wooden top. The floors are paved with tines, some in mosaic work. On each floor are washstands set in a recess, with hot and cold water. In the further part of the entries are the bath-rooms, each of which has a porcelain tub and is lined throughout with handsome gray marble. There are also in each entry trunk elevators running from the top to the bottom of the building. The rooms are wainscoted to a hight [sic] of four feet in paneled oak. The fireplaces are large and constructed with handsome brick, surrounded by wood-work, which extends up over the mantel to a hight of bout [sic] eight feet. A feature of each suite of rooms is the window seat. These seats are made of fine grained oak, and the lower part of each contains two sets of drawers and two closets. The suites will consist in general of a study, 18 by 14 feet, and two bedrooms, each 16 by 8 feet. Most of the sitting-rooms face the court and are lightel [sic] by three windows. A number of the rooms facing the quadrangle have oriel windows, and private vestibules are provided for each apartment where it is practicable. The bedrooms are large, and each is provided with a closet and a small cupboard with shelves.

The construction of Vanderbilt Hall was part of a dramatic shift in Yale’s campus plan. For much of the 19th century, the school consisted of a group of seven brick buildings known as the Old Brick Row. These buildings were constructed between 1752 and 1824, but by the late 19th century they had begun to be surrounded by newer, more ornate Gothic-style buildings. The first to go were South College and the Atheneum, both of which stood on the site of Vanderbilt Hall. They were demolished in 1893, and most of the other buildings in the Old Brick Row soon followed. By the time the first photo was taken less than a decade later, all were gone except for Connecticut Hall, which stands directly behind Vanderbilt Hall and has been preserved as the oldest surviving building on the Yale campus.

Vanderbilt Hall was designed to house about 130 students, and in its early years these included Cornelius “Neily” Vanderbilt III and Alfred Vanderbilt, two of the younger brothers of the building’s namesake. Neily would become estranged from his parents in 1896, when he eloped with Grace Wilson. She had been secretly engaged to William before his death, and Neily subsequently fell in love with her, over his parents’ strenuous objections. As a result, 21-year-old Alfred inherited the bulk of his father’s estate upon his death in 1899. However, like his eldest brother, Alfred also died young. He drowned in the 1915 sinking of the Lusitania, and he is regarded as a hero of the disaster for giving his life jacket to a woman and then attempting to tie life jackets to babies as the ship sank.

Today, Vanderbilt Hall continues to be used as a dormitory. The interior has been renovated several times, but very little has changed in its exterior appearance since the first photo was taken at the turn of the 20th century. Even the fence is still here, and the only significant difference between the two photos is the loss of the massive elm tree in the courtyard. In 1969, when Yale became coeducational, Vanderbilt Hall was used to house the school’s first freshman class of women. It now houses both men and women, with the freshmen of Branford College on one side of the building, and those of Saybrook College on the other side.