Connecticut Hall on the campus of Yale University in New Haven, around 1905-1910. Image courtesy of the Library of Congress, Detroit Publishing Company Collection. 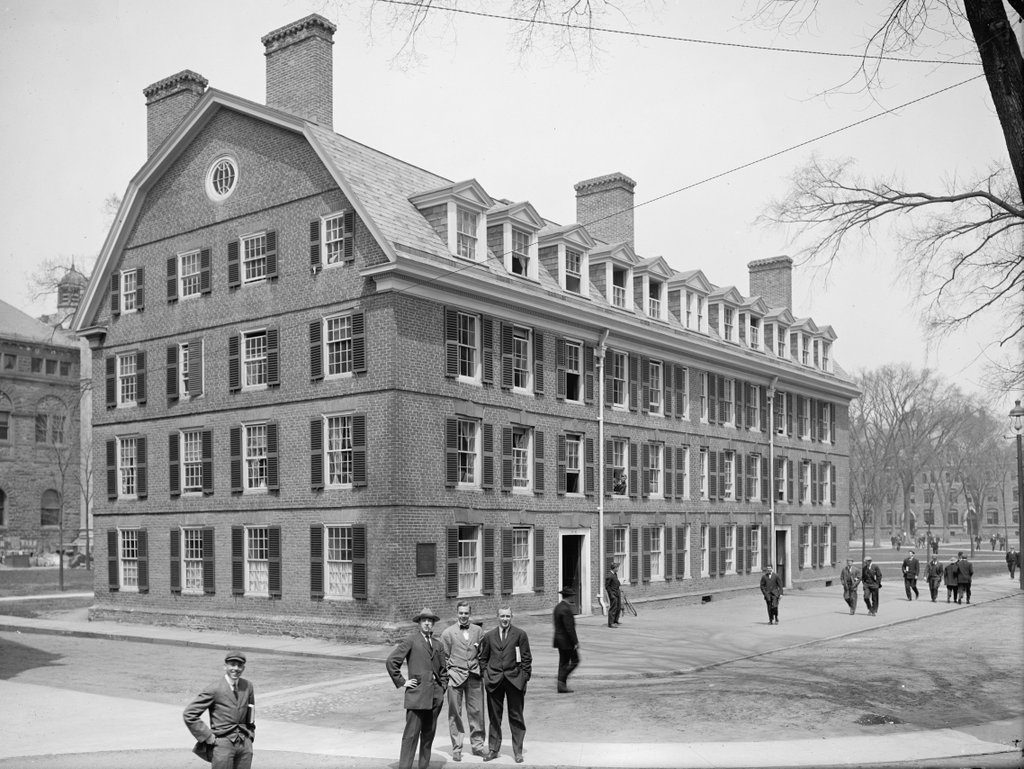 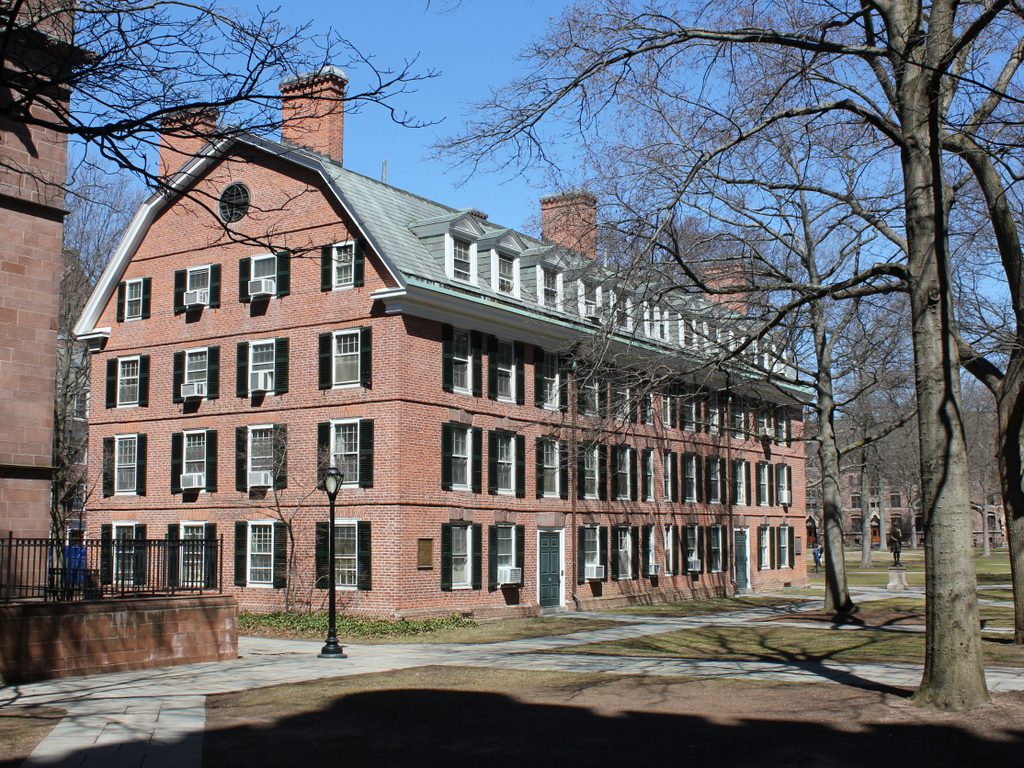 This area has been part of the Yale University campus since 1718, when the school’s first permanent building in New Haven was constructed just to the south of where this photo was taken. It was named College Hall, and during the early years it was the school’s only building. However, as Yale grew, the campus came to include other buildings, including Connecticut Hall, which was completed in 1752. It received its name because it was built using funds provided by the colony of Connecticut, and its Georgian-style architecture was based on the 1720 Massachusetts Hall at Harvard University.

Connecticut Hall originally served many different purposes, and included space for a dining room, library, recitation hall, and a chapel, in addition to dormitory rooms. The southeast corner of the building, seen closest to the foreground in this view, also housed the campus buttery, where students could purchase such necessities as cider, beer, sugar, pipes, tobacco, books, and fresh fruit. Over time, as new buildings were constructed on the campus, Connecticut Hall eventually became exclusively a dormitory, although the buttery remained here for many years, serving as a popular gathering place for Yale students until it finally closed in 1817.

By the turn of the 19th century, Connecticut Hall had been joined by several other brick buildings, including the First Chapel and Union Hall to the south of it, and the Lyceum and Berkeley Hall to the north. Around this time, Connecticut Hall itself was altered to match architectural tastes of the era. The original gambrel roof was removed, and it was replaced by a gabled roof that matched the other buildings. Two more buildings were added in the early 1820s, with the completion of North College and the Second Chapel, giving the school a total of seven buildings in a line running parallel to College Street. Several of the building names were changed by this point, including Union Hall, which became South College; Berkeley Hall, which became North Middle College; and Connecticut Hall, which became South Middle College. Collectively, this group came to be known as the Old Brick Row, and it was a defining feature of the Yale campus throughout most of the 19th century.

Throughout its many years as a dormitory, Connecticut Hall housed a number of notable Yale students. These included Revolutionary War hero Nathan Hale; dictionary publisher Noah Webster; inventor Eli Whitney; U. S. Senators Jeremiah Mason and Simeon Olcott; diplomats Joel Barlow, David Humphreys, and Silas Deane; prominent pastors Lyman Beecher, Horace Bushnell, Manasseh Cutler, and Nathanael Emmons; poet Edward Rowland Sill; and novelist James Fenimore Cooper. With the exceptions of Bushnell and Sill, all of these men attended Yale during the late 18th or early 19th centuries, and likely would have spent a significant amount of time here at the buttery in the corner of the building.

Starting in 1870, the school began shifting toward a new campus plan. Rather than the Old Brick Row, which had been set back from College Street, the new plan called for buildings along the perimeter of the campus, with an open quadrangle in the center. The Old Brick Row stood in the midst of this planned quadrangle, and its comparatively modest Federal-style buildings stood in sharp contrast to the far more ornate Gothic-style buildings that were rising around them. Demolition began in 1893, when South College and the Atheneum – formerly known as the First Chapel – gave way to Vanderbilt Hall. Four more buildings would be demolished between 1896 and 1901, leaving only Connecticut Hall, which was then known as Old South Middle.

Connecticut Hall had been the first of the Old Brick Row to be built, and it ultimately outlasted all of the other buildings that followed it. However, it too was slated for demolition at the turn of the 20th century, but this proposal sparked a significant outcry, particularly among older alumni who lamented the impending loss of the only remaining vestige of the school’s distant past. Professor Henry W. Farnam – who was himself a Yale graduate as well – was quoted in the Kansas City Star in 1903, praising its humble architectural style and remarking that “It is the one building which the wealth of the multi-millionaire cannot duplicate. Not only is South Middle our one example of colonial architecture, but it is the only example of a recognized architectural style owned by the college. I do not disparage the beautiful new and costly modern buildings, but they are not originals. They are necessarily copies.”

In an early example of historic preservation, the building was spared demolition. It was restored to its colonial-era appearance, and it was also renamed Connecticut Hall, after having been named South Middle College for about a century. This work included rebuilding the gambrel roof, and the project was completed in 1905, not long before the first photo was taken. As a result, Connecticut Hall became quite an anomaly here on the Old Campus, as the only Georgian-style building in the midst of an otherwise entirely Gothic quadrangle. However, as Farnham had noted, it was the only original example of a historic architectural style here, since all of the other buildings were imitations of medieval-era Gothic buildings. Ironically, though, Connecticut Hall would inspire a copy of its own in 1925, when the nearly identical Colonial Revival-style McClellan Hall was built just to the west of it, in order to provide some degree of symmetry in the quadrangle.

Connecticut Hall would undergo another major renovation from 1952 to 1954. The interior was completely gutted and rebuilt, and it was converted from a dormitory into academic use. Today, it is used as offices for the Department of Philosophy. However, the exterior has remained essentially unchanged since the 1905 renovations, as these two photos demonstrate. It still stands as the oldest building on the Yale campus, predating the next oldest building by nearly a century, and in 1965 it was designated as a National Historic Landmark.