A group of houses and other buildings on Church Street, looking north toward the corner of Elm Street in New Haven, probably around 1904. Image courtesy of the Connecticut State Library, Herbert Randall Survey of New Haven and Environs. 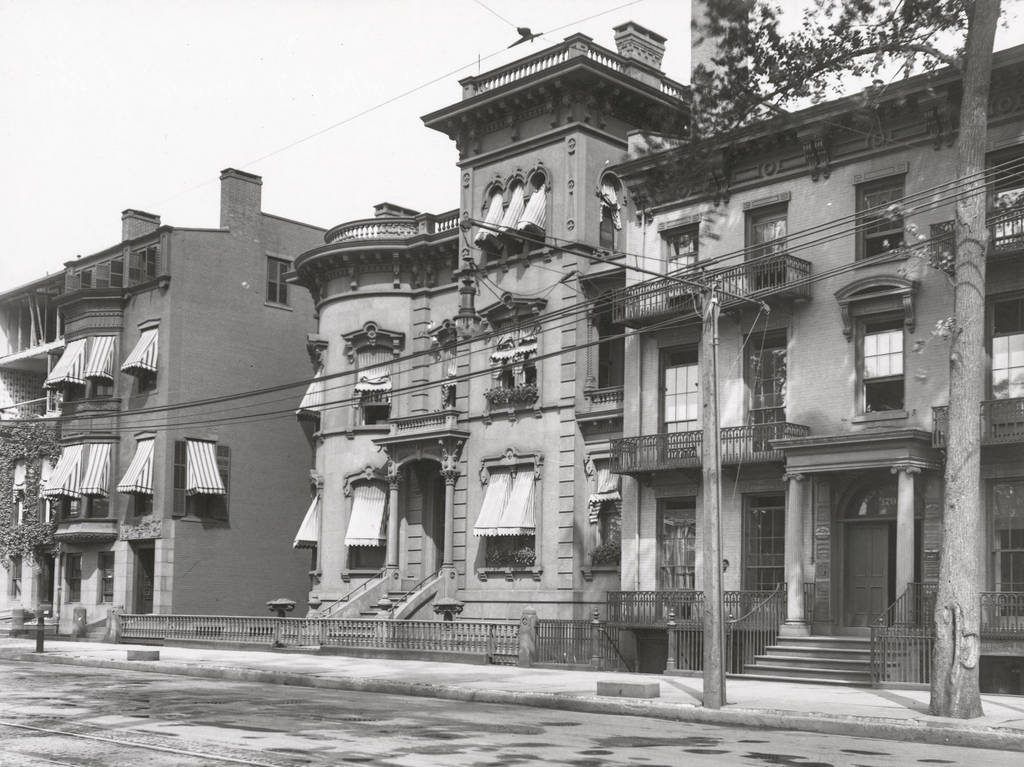 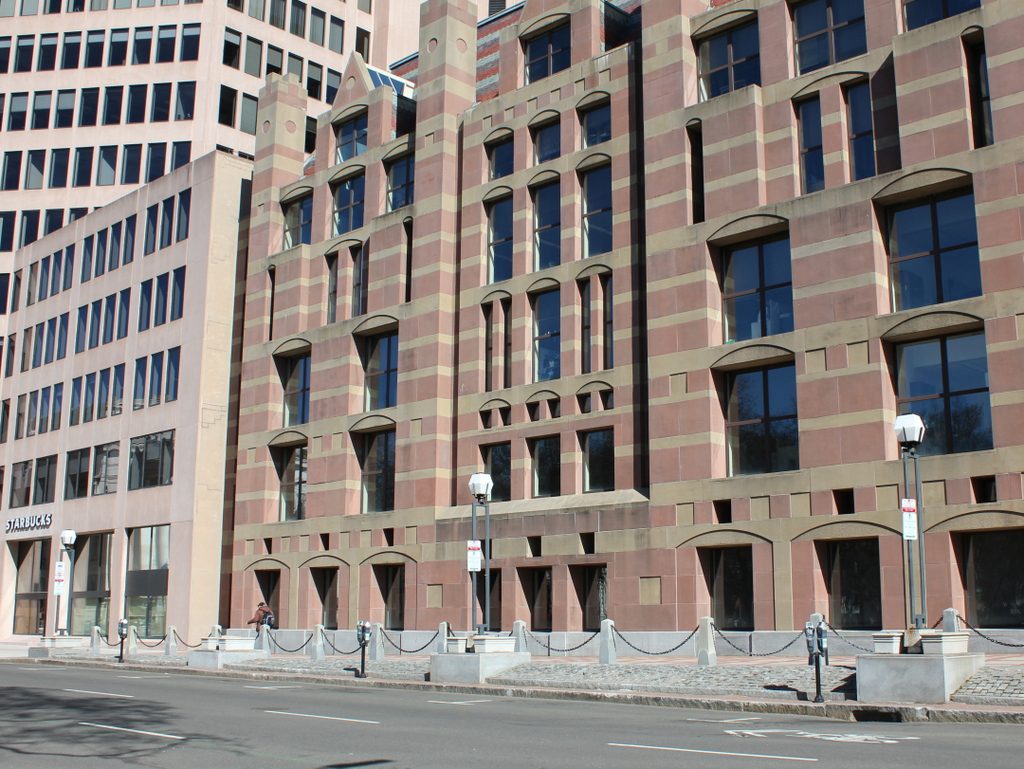 The first photo shows a group of mid-19th century buildings that once lined the east side of Church Street, directly opposite the New Haven Green. Starting on the far right, at 179 Church Street, is a three-story building that was known as the Law Chambers. Located directly adjacent to the county courthouse, which stood just out of view to the right, this building housed offices for a number of lawyers. Their names were listed on placards on either side of the front door, and some are legible in the photo, including Frederick L. Averill, William L. Bennett, John A. Doolittle, Hobart L. Hotchkiss, and Charles F. Mitchell. These names help to provide the likely date of the first photo; according to city directories, 1904 appears to be the only year that all five of these men had offices here.

To the left of the Law Chambers, in the center of the photo, is an elegant Italianate-style home at 185 Church Street. By the turn of the 20th century, New Haven was undergoing rapid population growth, and most of the old mansions along the Green were giving way to new commercial and governmental buildings. However, this house was still standing when the first photo was taken. Based on its architecture, it was probably built sometime around the 1850s, as it features many Italianate details that were common during this era, including brackets under the eaves, quoins on the corners, and a tower with tall, narrow windows on the top floor. By the time the first photo was taken, it was the home of James English, a businessman who served for many years as president of the United Illuminating Company. The 1900 census shows him living here with his wife Clementina, along with a lodger and three servants.

Further to the left is a group of attached rowhouses. Only two are visible in the photo, but there were a total of four, which extended as far as the corner of Elm Street. The one closer to the camera was 187 Church Street, and during the 1900 census it was the home of Dr. Henry W. Ring, a physician who lived here with his wife Maud and two servants. To the left of his house was another physician, Dr. William G. Daggett, who lived in 189 Church Street and also had his medical practice there. Curiously, this house is missing the exterior wall of the top two floors in the first photo. This may have been renovation work, as later photographs suggest that the building’s facade was rebuilt at some point in the early 20th century.

Daggett, Ring, and English were all still living here on Church Street during the 1910 census, but this would soon change. Daggett died later in the year, and by 1911 his widow was living on Orange Street. English also moved out of his house by 1911, and was living in a house on St. Ronan Street. His house was demolished soon after, because by 1913 the 10-story Chamber of Commerce building had been constructed on the site. Ring was the last to relocate; the 1913 city directory shows him living here and practicing medicine out of the house, but by 1914 he had moved to the Hotel Taft, although he continued to have his office here in his former house.

Today, all of the buildings from the first photo have since been demolished, along with the Chamber of Commerce building that had replaced the English house. Much of the scene is now occupied by the northern part of City Hall, which was constructed in the 1980s. Its alternating pattern of light and dark bands was designed to match the exterior of the old City Hall building, which had been mostly demolished except for its brownstone facade. On the left side of the present-day scene is an 18-story office building that had originally been constructed in the mid-1970s, as the home of the New Haven Savings Bank.