The First Methodist Church on Court Street, seen from Park Square in Westfield around 1892. Image from Picturesque Hampden (1892). 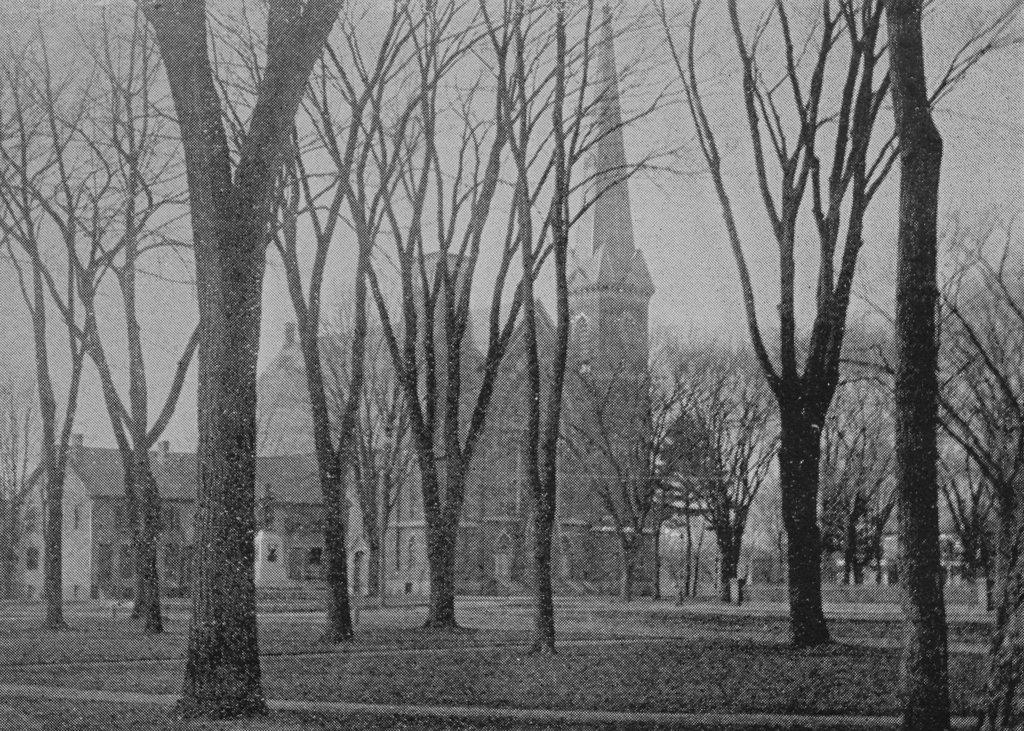 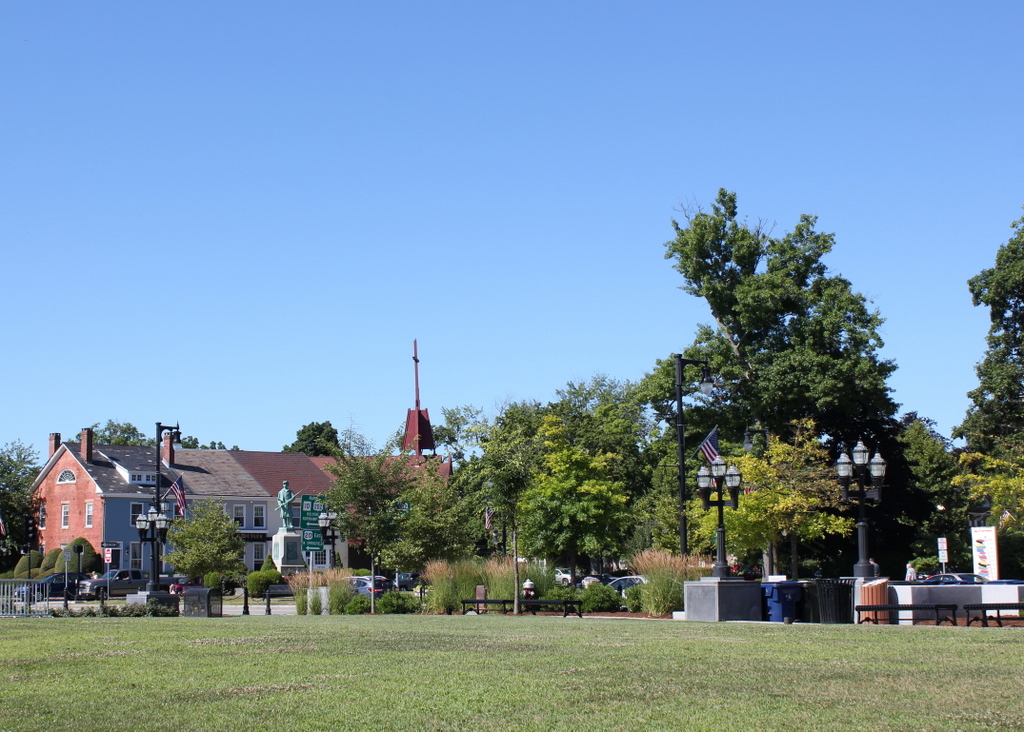 The origins of Westfield’s Methodist church date back to 1794, when the first Methodist services were held in a village in the southwest corner of the town that came to be known as Mundale. The first Methodist church in the center of Westfield was constructed on Main Street in 1833, and it was followed a decade later by a new building at the northwest corner of Elm and School Streets. This one was used by the church for the next 33 years, and it actually still stands today, albeit in an almost unrecognizable condition.

In 1875, the church began construction on a new, much larger building, which was located on the south side of Court Street, just west of Park Square. The cornerstone was laid on June 3 of that year, in a ceremony that featured remarks by at least four former pastors of the church, including Jefferson Hascall, who had begun his pastorate here in Westfield back in 1829. Another was Mark Trafton, who had served as pastor for several different stints in the 1840s and early 1850s before being elected to a single term in Congress in 1854, as a member of the Know-Nothing Party.

According to an account that was published in the Springfield Republican, Trafton’s speech “was interrupted by a half-crazy woman, who wanted all to know “that Jesus didn’t order the building of that church, and Moses was the one to whom the stones were given.” However, she was escorted away by the police, and the ceremony continued. Trafton was followed by the singing of a hymn, and then a box was placed under the cornerstone. It contained newspapers, church member and donor lists, and other documents for posterity. The current pastor of the church, Dr. John Hanson Twombly, then said a few words before laying the cornerstone. Twombly had been pastor of the church more than two decades earlier, from 1851 to 1853, but he returned to Westfield in 1874, after having served as president of the University of Wisconsin for the previous three years.

The church took about 10 months to complete, and it was dedicated on April 4, 1876. Unlike its wooden, Greek Revival predecessor, this church building was constructed of brick, and it featured an ornate High Victorian Gothic-style exterior. As was typical for this style of church, its front façade was asymmetrical, with a shorter tower on the left side and a taller one on the right. It was built at a cost of $80,000, although it does not seem clear as to whether this was just for the building itself, or the furnishings as well. In either case, these furnishings included a new organ, which was presented to the church by the young people’s society, who purchased it for $7,000, or about $170,000 today.

Dr. Twombly was still the pastor of the church when this building was completed, and he gave brief remarks at the dedication ceremony. However, the keynote speaker of the day was Bishop Matthew Simpson of Philadelphia. He had risen to prominence during the Civil War, giving pro-Union speeches and even serving as a friend and advisor to Abraham Lincoln. He gave a eulogy at Lincoln’s funeral in Springfield, Illinois, and three years later he officiated the wedding of the president’s son, Robert Todd Lincoln. Here in Westfield, the well-known clergyman spoke for almost two hours to a crowd of about 1,500 people, and the Republican noted that his topics included “the progress and growing power of Christianity,” and that “he believed in building costly churches, and said that one church like the one he stood in did more for good morals than a dozen jails ,or a hundred policemen.”

The first photo shows the church about 15 years later, in the early 1890s. In the foreground of the photo is Park Square, and in the distance on the left side is the Morgan Block, a commercial building that was constructed in the late 1810s. In front of this building, and visible in between the trees of the first photo, is Westfield’s Civil War monument, which was dedicated in 1871 in memory of the 66 Westfield residents who died during the war. Further to the right, in the center of the photo, both the Morgan Block and the monument are dwarfed by the Methodist church, which would stand here as a prominent landmark in downtown Westfield for many years.

The church building remained in use for nearly a century, but it was ultimately demolished in 1967, and a new church was completed on this site a year later. The new building is much shorter than its predecessor, and its modernist architecture bears no resemblance to the Gothic style of the old building, but its design did incorporate several salvaged elements, including chandeliers and a window. Because of its shorter height, the church is barely visible from this angle in the present-day scene. Only the large cross atop the church is noticeable, and it can be seen just to the right of the Morgan Block, which remains largely unaltered since the first photo was taken some 125 years earlier.