The Highland Ice Company on Coleman Street in Springfield, around the turn of the 20th century. Photo from author’s collection. 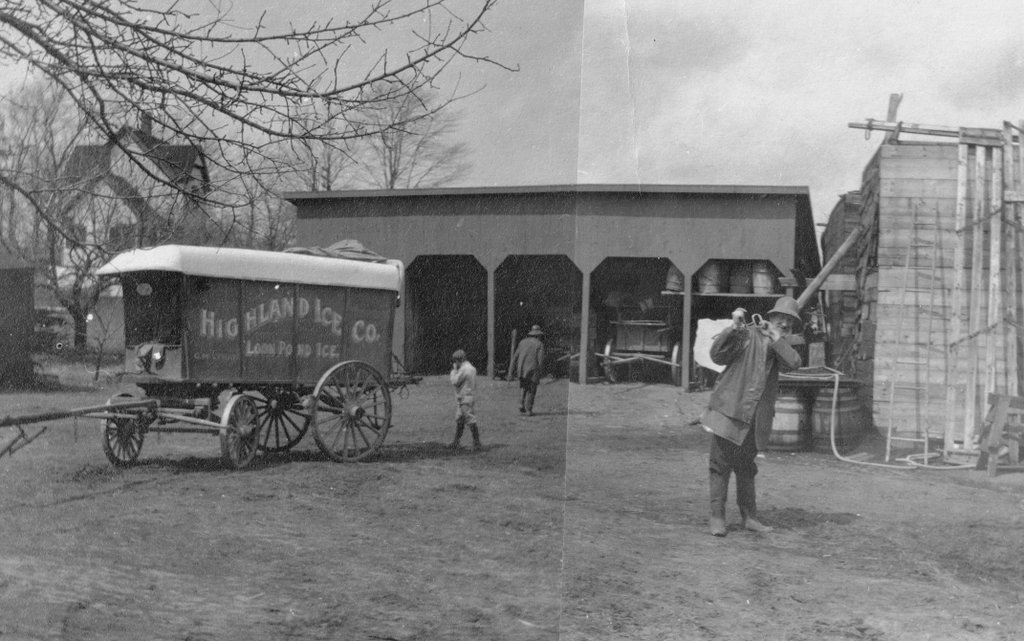 The scene on October 4, 1938. Image courtesy of the Springfield Building Department. 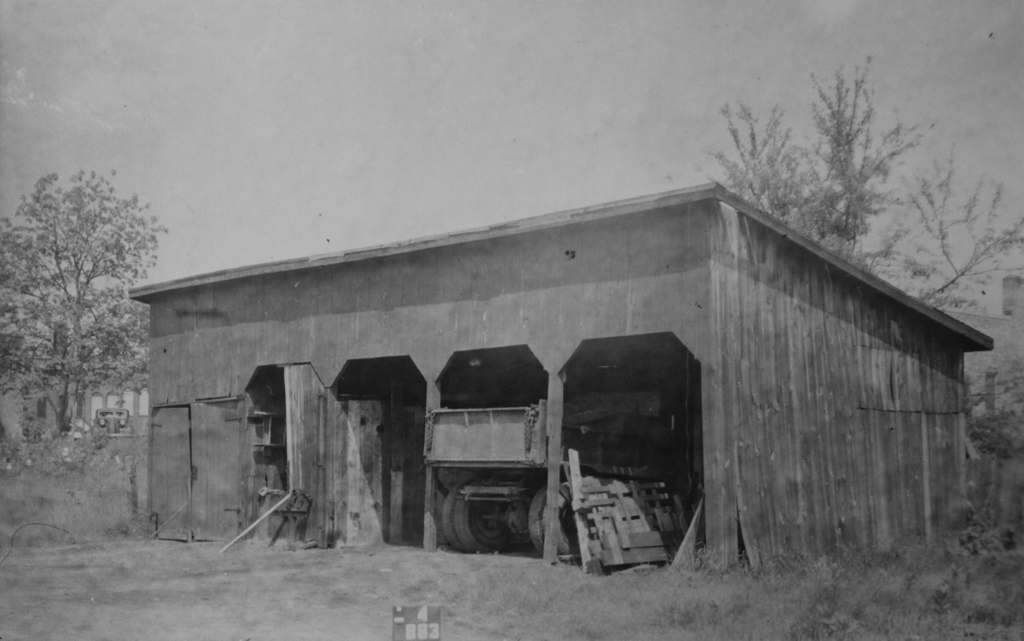 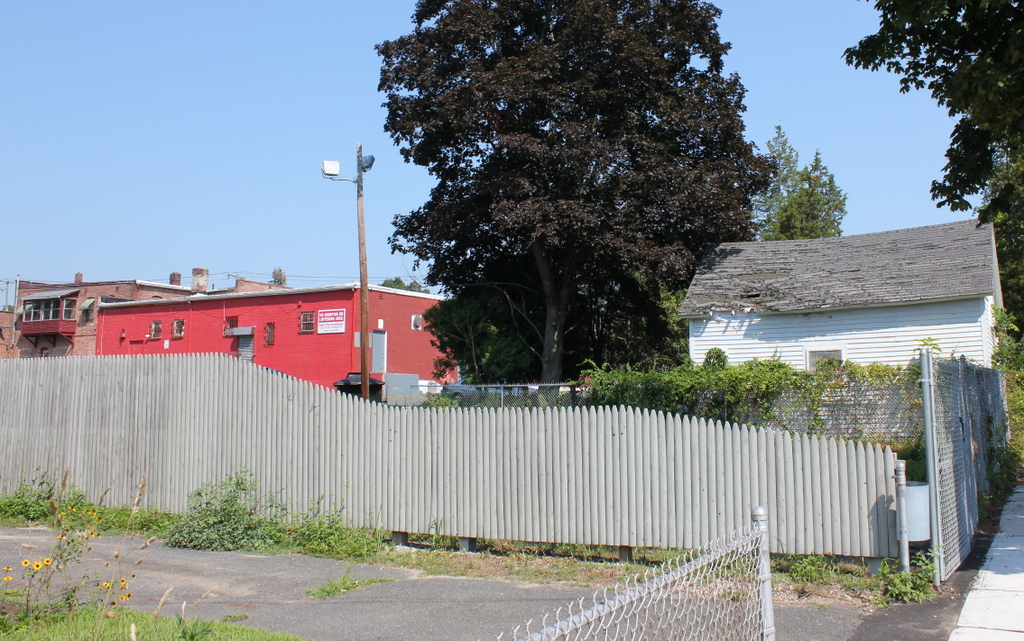 The first photo here is from my family’s old photos, and it shows the ice business of my great-great uncle, George M. Lyman. It is actually a composite image; it appears to have been two separate images that were developed on the same sheet of photo paper, with a gap in the middle. I digitally eliminated the gap, and stitched the two images together to form a single panoramic view of the scene. The photo is undated, but the writing on the back, which reads “For Uncle Arthur from Leslie,” suggests that it was probably taken sometime between 1908 and 1912. The Leslie who wrote it is probably Leslie Page, who married George Lyman’s stepdaughter in 1908, and Uncle Arthur appears to have been Arthur W. Lyman, George’s older brother. Arthur worked as a teamster for the ice business, but he died in 1912, so the photo must have been taken before then.

The people in the photo are unidentified; it is possible that the man carrying the block of ice in the foreground might have been either Arthur or George, but I have never seen photos of either of them before. In any case, though, the photo was definitely taken on Coleman Street, right next to George Lyman’s house at 34 Coleman Street. The house is directly behind the photographer and not visible in the scene, but the photo shows several outbuildings on the property that were used by the ice business, including a large shed in the center, an ice bin on the right, and part of another shed on the far left. The photo is facing north, and the house in the distance on the left is at 153 Boston Road, which stood directly opposite Jasper Street.

George Lyman was originally from Wilbraham, and he grew up on the family farm on Springfield Street, just east of the Springfield boundary. His family was relatively prosperous, and he attended the town’s private high school, Wesleyan Academy, which is now Wilbraham-Monson Academy. Most of his siblings also attended the school, as did both of his parents, and both of his grandfathers had been trustees of the school. George’s father died when he was 13, and he subsequently assisted his mother on the farm. However, in the early 1890s, when he was 22, he moved to Springfield and entered the ice business.

At the time, in the days before electric refrigeration, ice was a valuable commodity. Aside from providing cold drinks on hot summer days, it also played an important role in the nation’s food supply by preserving meats and other perishable foods. This allowed food to be stored longer and transported further, and ice was used in large-scale commercial settings and in the iceboxes of individual households.

The commercial ice industry peaked in the 19th and early 20th centuries, and it was particularly prevalent in the northeast, which had the ideal combination of cold winters and extensive transportation networks to move the ice. The ice was harvested in the winter from lakes, ponds, and occasionally rivers, typically once the ice was about 18 inches thick. It was cut into blocks, and then stored in ice houses, where it could be kept until the following winter. From there, the ice could be used locally during the warm months, or it could be sold to different parts of the country or even overseas.

After moving to Springfield in the early 1890s, George Lyman lived in several different places before moving to 34 Coleman Street around 1899. At the time, Springfield’s Pine Point neighborhood was just beginning to be developed into a residential suburb, and Lyman would have been among its early residents. He was about 30 years old, and he had recently married his wife Laura, a widow six years his senior who had three children from her previous marriage. George and Laura would subsequently have a child of their own together, Ralph, who was born in 1900, but he died at the age of seven.

The 1899 city atlas shows the Lyman home on one parcel, and the outbuildings on the next two parcels to the north. The ice bin on the right side of the first photo was not built yet, but the other two sheds were. Unlike the house, which was listed as belonging to George, these two parcels were owned under Laura’s name. George conducted his ice business here, and the large shed in this photo was apparently used to store the wagons, which were used to deliver the ice to both retail and commercial customers. As indicated by the wagon on the left, it was known as the Highland Ice Company, and the ice was harvested from Loon Pond, about two miles to the east of here on Boston Road. George owned a parcel of land at the southwest corner of the pond, at the corner of Boston and Pasco Roads, and this is apparently where his ice house was located.

The ice business was labor-intensive work, starting with the cutters who worked on frozen ponds in the middle of winter and ending with the teamsters who delivered it to homes and businesses throughout the year. George Lyman occasionally published classified ads looking for workers, including one in 1906 that sought an “ice peddler” and promised “good wages for the right man.” Nearly a decade later, in 1915, he posted another ad looking for two peddlers, and the only requirement listed was that they “must be temperate.” In addition, several of George’s family members worked for him, including the above-mentioned brother Arthur. According to family tradition, his younger brother Frank Lyman—my great grandfather—also worked for him, although this may have been on a temporary basis, because census records and city directories all indicate that Frank’s primary occupation was as a machinist.

During the early 20th century, George Lyman appears to have harvested about 3,000 to 4,000 tons of ice per year, although the particularly cold winter of 1911-1912 was a boon for ice dealers, and by the end of February he had stockpiled about 6,000 tons. That year, an article in the Springfield Republican listed the amount harvested by different local ice companies, and he was tied for the fifth-highest out of the nine dealers on the list. Based on contemporary advertisements in the newspapers, he generally sold his ice for 40 cents per 100 pounds to retail customers, 30 cents to drugstores, and 25 cents to markets.

George Lyman was apparently looking to get out of the ice industry as early as 1913, when he published a classified ad that read, “Having been in business 21 years, would like to sell 3000 tons of ice, house, barn, sheds, wagons, horses, tools, elevator, icehouse, etc.” However, he must not have had any takers, since he continued to run the business for several more years before selling it to the Harder Grain and Coal Company around 1915. He then turned his attention to the family farm in Wilbraham, but he continued to live here on Coleman Street until around 1925, when he and his wife Laura moved to Wilbraham.

The first photo was taken in 1938 as part of a WPA project to document every building in the city of Springfield. By this point the ice bin on the right side had been removed, but the old shed was still standing, although its condition had deteriorated considerably since the days when George Lyman ran his ice business here. The old horse-drawn ice wagons were long gone by then, and the dump truck in one of the bays demonstrates the ways in which transportation had changed over the past few decades.

During this time, the surrounding neighborhood had also changed. By the late 1930s, Pine Point had become much more developed, and Boston Road was now lined with a number of businesses. The house in the distance on the left side of the first photo was gone by this point, and it was replaced by a row of commercial buildings, one of which is partially visible on the far left side of the second photo. Among the retail tenants of these buildings was the first Friendly’s restaurant, which had opened in 1935 in a storefront directly behind the old shed. There, brothers S. Prestley and Curtis Blake got their start in selling ice cream, just yards away from where George Lyman had once sold ice.

Today, more than 80 years after the second photo was taken and over a century after the first one, the old shed is long gone. Lyman’s house at 34 Coleman Street is still standing, but the other two parcels next to the house have been transformed. Around 1954 a house was built on the lot directly adjacent to his old house, and it stands approximately on the spot where the first photo was taken. The other lot, where the shed was once located, is now part of a parking area for the businesses on Boston Road. These early 20th century commercial buildings are still standing today, and they are visible on the left side of the present-day photo. Furthest to the right in the photo, directly behind the telephone pole, is the part of the building that was once occupied by the first Friendly’s restaurant.