Looking north on Broadway from the corner of State Street in Albany, with the post office building in the foreground on the right, around 1900-1906. Image courtesy of the Library of Congress, Detroit Publishing Company Collection. 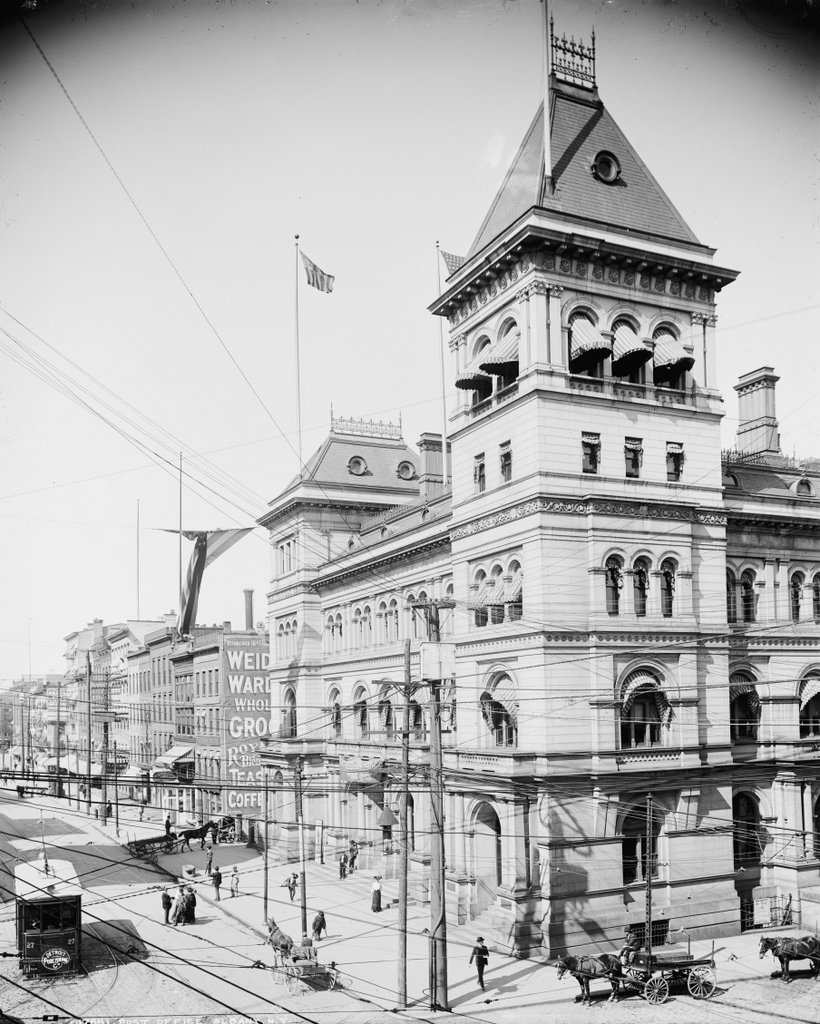 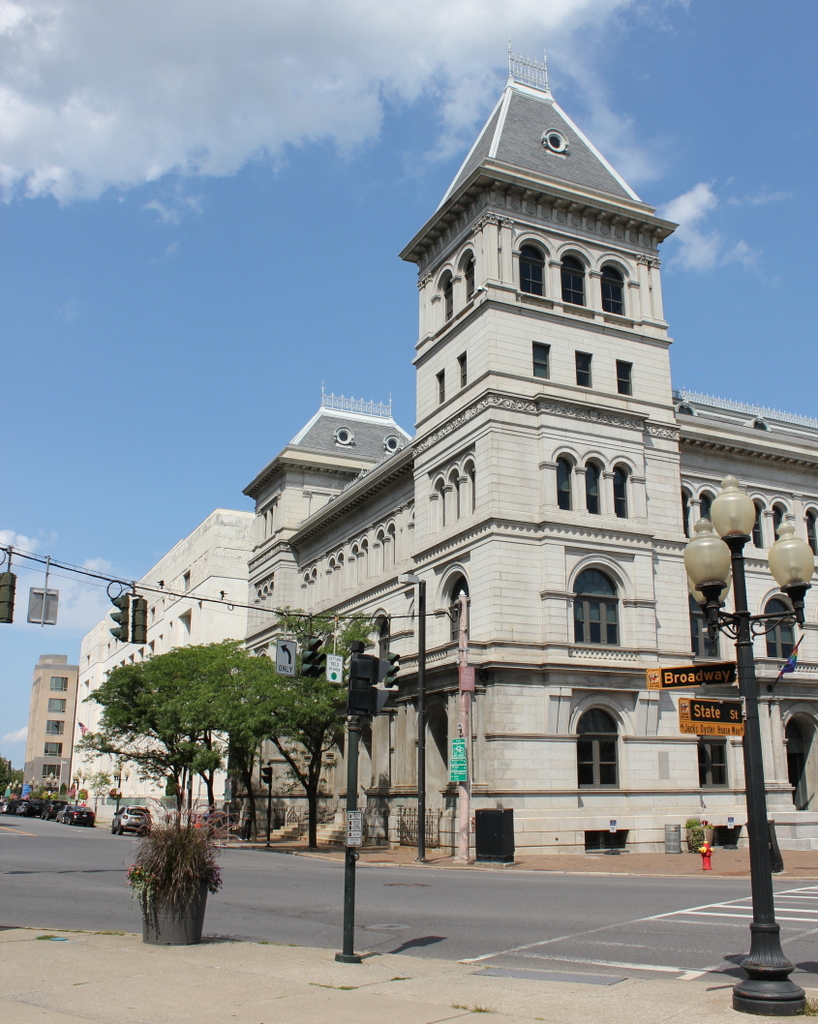 Albany’s old post office building, which is shown here in the foreground of both photos, stands at the northeast corner of Broadway and State Street, only a few hundred yards west of the Hudson River. The building opened in 1883, and it housed the post office along with several other federal offices. It has changed use since then, but it survives as an important architectural landmark here in downtown Albany.

Prior to the construction of this building, there was no federal building in Albany, so the post office and other federal agencies operated out of rented spaces. Congress finally authorized the construction of a federal building in 1872, but work on the building did not actually begin for another seven years because of funding delays. The design also changed during this time. The original plans called for a High Victorian Gothic design, but James G. Hill, the Supervising Architect of the Treasury, subsequently redesigned it to feature Renaissance Revival architecture.

The building’s cornerstone was laid in 1879, and it was ready for occupancy by December 1883, when the internal revenue office moved in. The post office opened here on the ground floor of the building in January 1884, and the other federal agencies moved in later in the year. These included the United States Customs Service, the Steamboat Inspection Service, and the United States Signal Service. The latter agency, whose duties involved weather observations and forecasts, occupied the third floor and the large tower at the corner of the building. In addition, the building featured a courtroom that was used by both the United States Circuit Court and the District Court.

The first photo was taken just after the turn of the century, about 20 years after the building was completed. There are no automobiles in this photo, although within just a few years they would become ubiquitous here on the streets. In the meantime, though, all of the vehicles in this scene are horse-drawn wagons, with the exception of the electric trolley in the lower left corner. There are a number of pedestrians on the wide sidewalk in front of the post office, including a man using crutches, and above them the street is crisscrossed by a web of electrical, telephone, and trolley wires.

This building continued to serve its original purpose until 1934, when a new federal courthouse, post office, and custom house opened immediately to the north of here on Broadway. Visible on the left side of the present-day photo, this newer building features an Art Deco exterior that was designed by the local firm of Gander, Gander & Gander. The post office moved out of that building in 1995, but it continues to be used as a federal district courthouse for the Northern District of New York, in addition to housing offices for federal law enforcement agencies.

As for the older post office here in the foreground, it remained in use as a federal office building until 1972. Then, in 1977 it was sold to the State University of New York, which had recently acquired the adjacent Delaware & Hudson Railroad Company Building. The two buildings are now connected, and they now form the SUNY Plaza, which serves as the headquarters of the SUNY system. Both buildings were added to the National Register of Historic Places in 1972, and then in 2020 the newer federal courthouse—now named the James T. Foley Courthouse—was also added to the National Register. In addition, all three buildings are contributing properties in the extensive Downtown Albany Historic District, which was established in 1980.