Union Station in Albany, seen from the southwest corner at Broadway and Steuben Streets, around 1900-1910. Image courtesy of the Library of Congress, Detroit Publishing Company Collection. 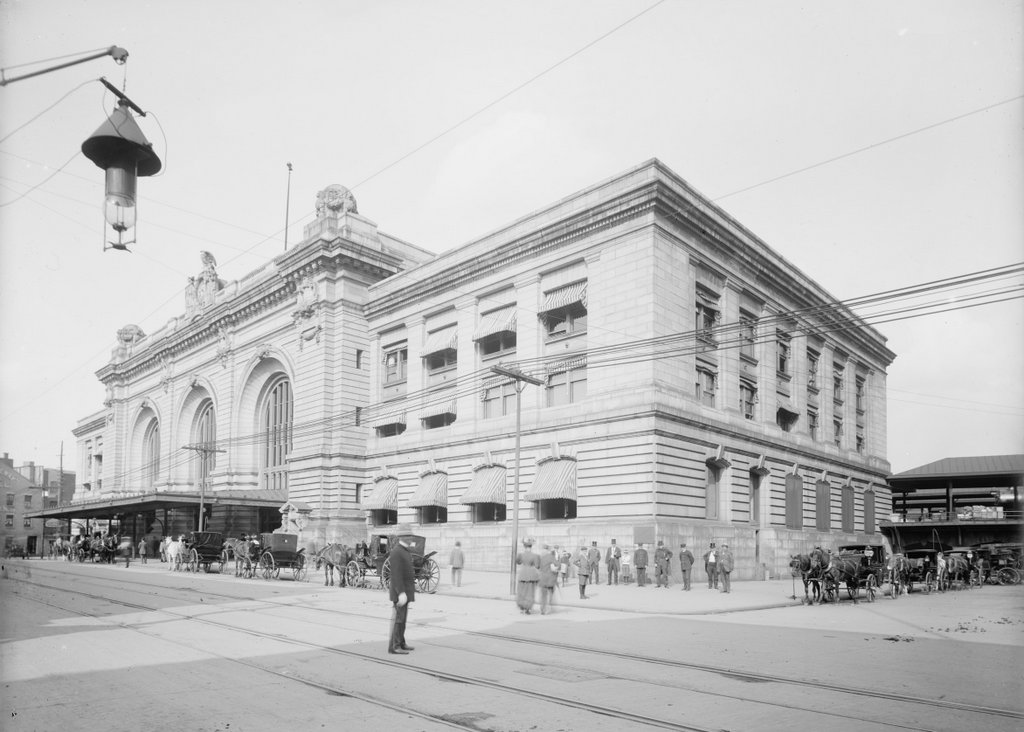 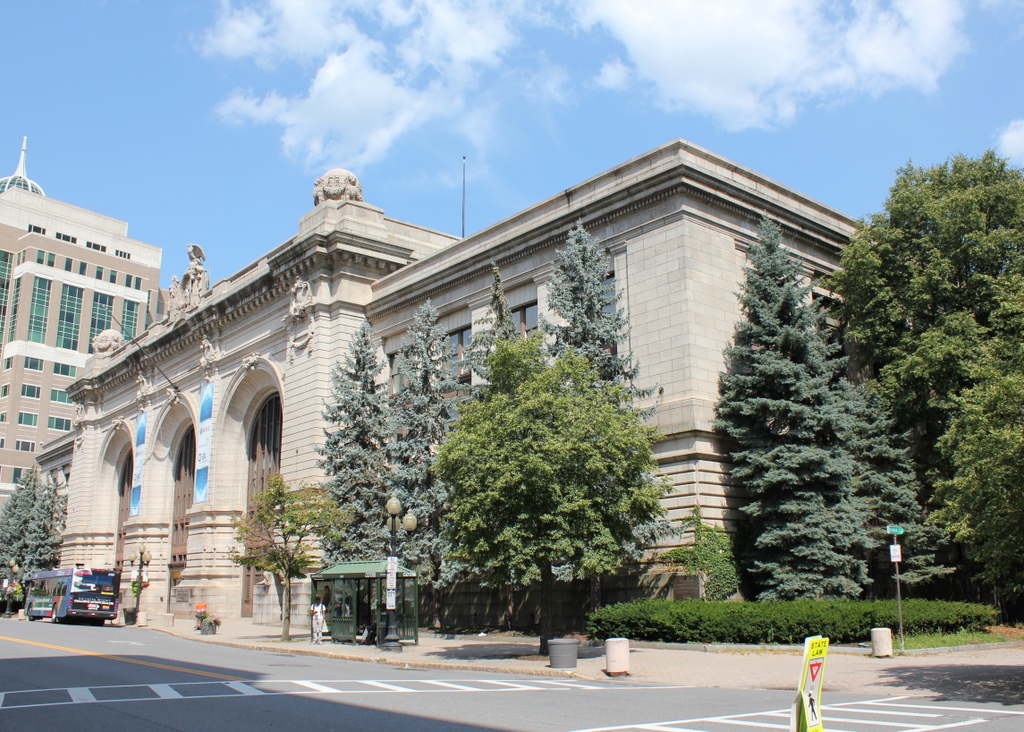 As discussed in more detail in a previous post, Albany’s Union Station opened in 1900 here on Broadway, in the northern part of downtown Albany. It was primarily used by the New York Central and Hudson River Railroad, along with two of its subsidiaries: the West Shore Railroad and the Boston and Albany Railroad. Together, these three railroads comprised more than two-thirds of the rail traffic here when the station opened, with 42 New York Central, 13 West Shore, and 10 Boston and Albany trains departing daily. The remaining traffic was from the Delaware and Hudson Railway, which was headquartered in Albany and had 31 daily departures here.

The first photo was taken soon after the station was completed, showing its ornate granite Beaux-Arts exterior. It was designed by the Boston-based architectural firm of Shepley, Rutan and Coolidge, which was responsible for many of the stations along the route of the Boston and Albany. During the heyday of passenger rail travel, the railroad stations of large cities often featured grand architecture. Such stations would provide a good first impression to visitors of a particular city, along with demonstrating the importance and prosperity of the city and its railroad lines. This would have been especially important here in Albany, given its role as the capital city of what was, at the time, the largest state in the country.

Here on the west side of the station, where most passengers would have entered and exited the building, the exterior features three arches, giving it an appearance similar Grand Central Terminal, which was built more than a decade later. Above these arches are a number of elaborate carvings. Of these, the most prominent is the state seal of New York, which was carved over the course of three months by about 15 workers. It stands above the middle arch, and it consists of a clock that is flanked on either side by allegorical representations of Liberty and Justice. Beneath the clock is the state motto, Excelsior, and above it is an eagle perched on a globe. To the left and right of the seal, atop the corners of the central part of the station, are stone globes, each supported by four lions. Although not visible here, two identical globes are located on the other side of the building.

This station was a busy place throughout the first half of the 20th century, with rail travel peaking during World War II when up to 121 daily trains departed from here. However, railroads around the country saw a steep decline in ridership soon after the war, when highways and airlines became the preferred ways to travel by the 1950s. Even the New York Central, once one of the most lucrative companies in the country, was facing possible bankruptcy. This financial situation was not helped by the fact that it had to maintain large, aging stations such as this one in Albany, despite very limited numbers of passengers.

In 1968, the New York Central merged with its former rival, the Pennsylvania Railroad, creating the Penn Central Railroad. Around the same time, the railroad began constructing a new, much smaller station across the Hudson River in Rensselaer, and the old station here in Albany closed on December 29, 1968. The tracks to the station were then removed and, as a sign of the changing ways that Americans traveled, Interstate 787 was built through the former rail yard behind the station.

The station itself was the subject of different redevelopment proposals, some of which would have involved demolishing the old building. Instead, it was ultimately preserved and converted into offices in the 1980s. For many years it was occupied by banks, beginning with Norstar Bancorp. The company’s name is still carved in the facade above the central arch, but the bank went through a series of mergers in the 1990s and early 2000s, eventually becoming part of Bank of America. The former station was occupied by Bank of America until 2009, and the building is now used as offices for a variety of other companies.