The gravesite of Washington Irving in Sleepy Hollow Cemetery, around 1910. Image courtesy of the Library of Congress, Detroit Publishing Company Collection. 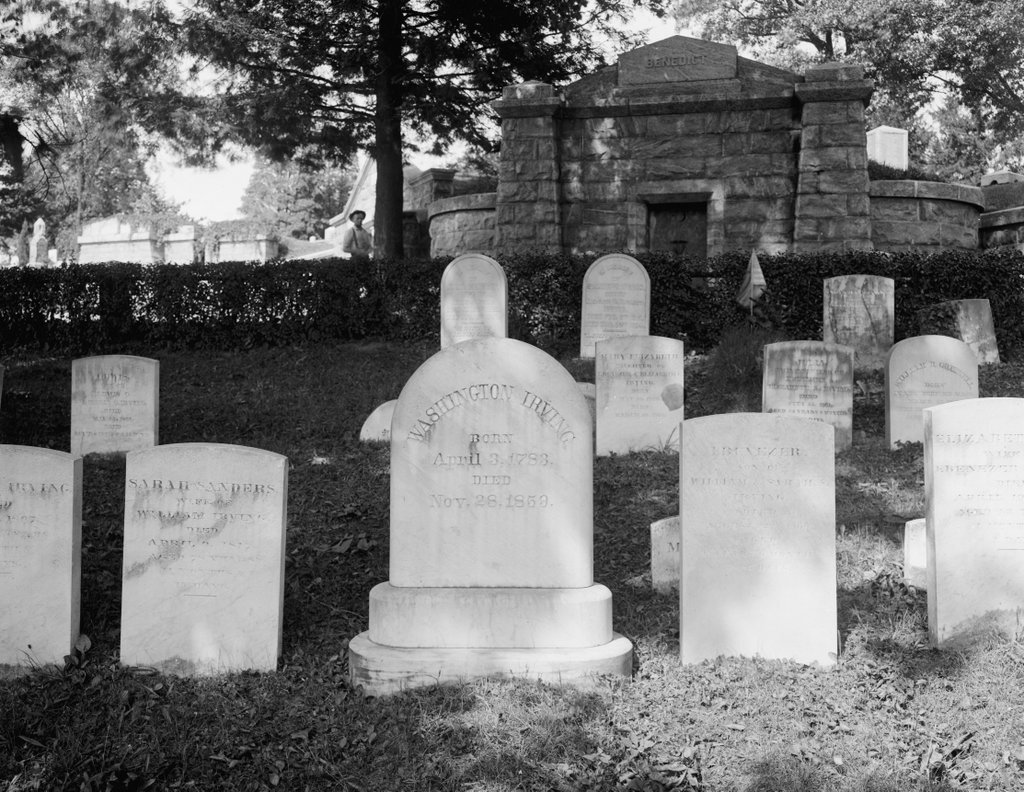 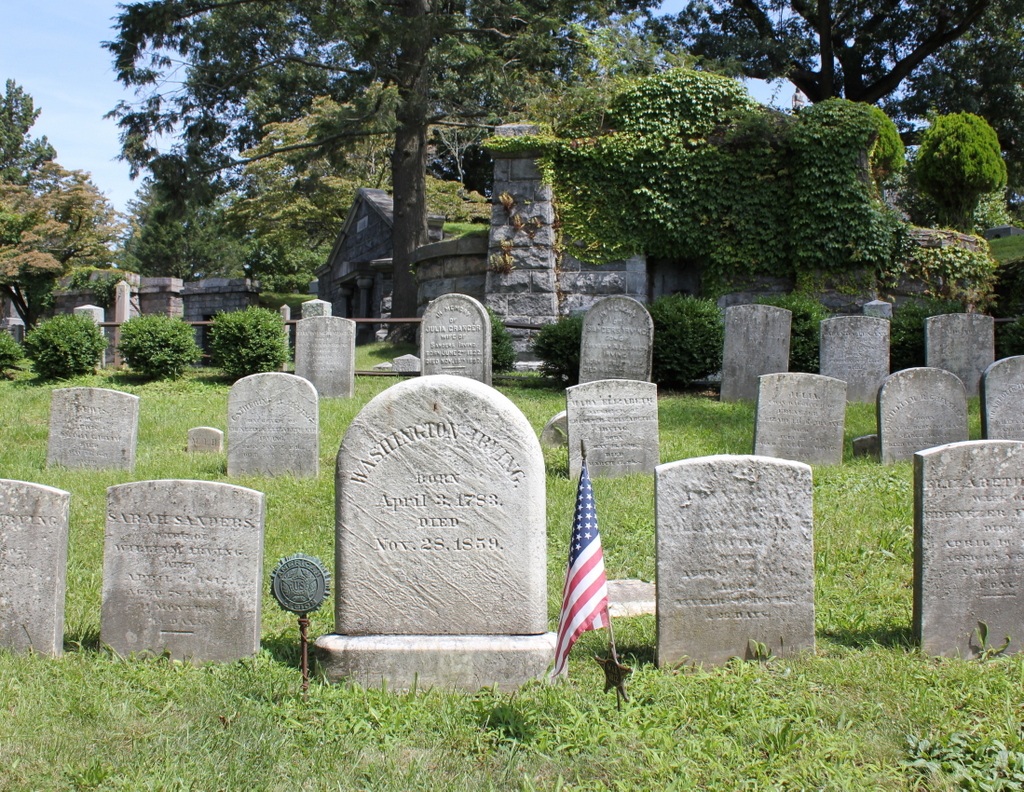 Washington Irving was the first widely-successful American fiction writer, best known for his short stories such as “Rip Van Winkle” and “The Legend of Sleepy Hollow.” His lifetime coincided with the early years of the country; he was born in New York City in 1783, just months before the Treaty of Paris, and he died in 1859, less than a year and a half before the start of the Civil War. Throughout this time, he published many works, including short story collections, biographies, and histories. He served in the War of 1812, as recognized by the flag next to his headstone, and many years later he served as the US minister to Spain during the John Tyler administration, from 1842 to 1846.

Although he grew up in New York City, and spent a number of years in Europe, Irving spent much of his later life in the vicinity of Sleepy Hollow. In 1835 he purchased Sunnyside, his estate in nearby Tarrytown. With the exception of his time in Spain, it was his home for the rest of his life, and after his death he was buried here in Sleepy Hollow Cemetery. The cemetery is located directly adjacent to the Old Dutch Church of Sleepy Hollow and its churchyard, both of which Irving featured in his “Legend of Sleepy Hollow.”

Washington Irving never married, and he had no children, but he is interred here in the cemetery with a number of other family members. When the first photo was taken in the early 20th century, these included his parents William Irving and Sarah Sanders immediately to the left of his gravestone, and his brother Ebenezer Irving and Ebenezer’s wife Elizabeth Kip to the right.

In the second row of the first photo, starting on the left, is Lewis Irving, the grandson of Washington Irving’s older brother William. Further to the right in the second row are Mary and Julia Irving, who were daughters of Ebenezer and Elizabeth Irving. On the far right is William R. Grinnell, the husband of Mary and Julia’s sister Charlotte. The two rounded headstones in the back row are Julia Granger and her husband Sanders Irving, and to the right are Amanda Tenant and her husband Edgar Irving. Both Sanders and Edgar were sons of Ebenezer and Elizabeth. There is also a flag in the back row, which might be a temporary marker for Washington Irving, the son of Edgar and Amanda, who died in 1910. The first photo was taken around this time, so it may have been taken after he died but before a permanent stone was installed.

Today, more than a century after the first photo was taken, much of this scene has remained the same; even the pine tree in the background appears to be the same one in both photos. However, the headstones are significantly more weathered than they had been in the early 20th century, and there have been several more interments here in the Irving family plot. Immediately behind and to the right of Washington Irving’s headstone is Catherine Irving, the last surviving child of Ebenezer and Elizabeth, who died in 1911 at the age of 95.

In the back row is the headstone of the younger Washington Irving, in the place of the flag from the first photo. Further to the left in the back row is his sister, Mary Irving Huntington. She died in 1932 at the age of 82, and hers is the most recent headstone in this scene. She was ten years old when her famous great uncle died in 1859, so she may have been the last living member of the family who would have had memories of Washington Irving.