Buildings on the east side of Fifth Street, looking south toward the corner of Chestnut Street, in February 1859. Image courtesy of the Library Company of Philadelphia, Frederick De Bourg Richards Photograph Collection. 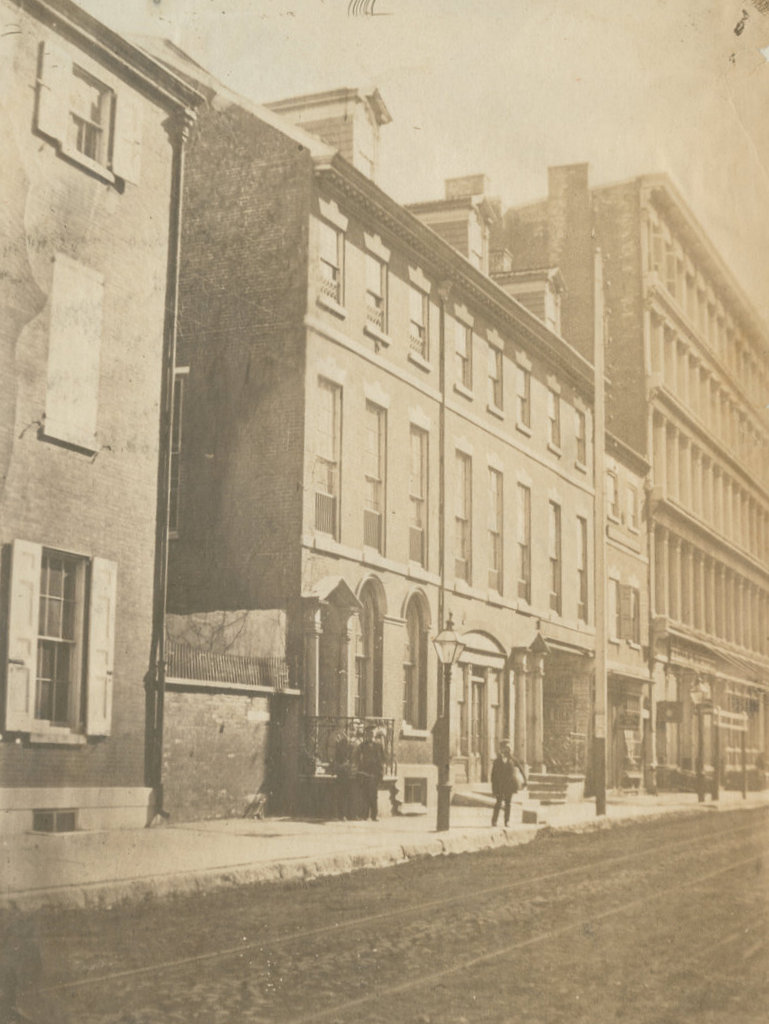 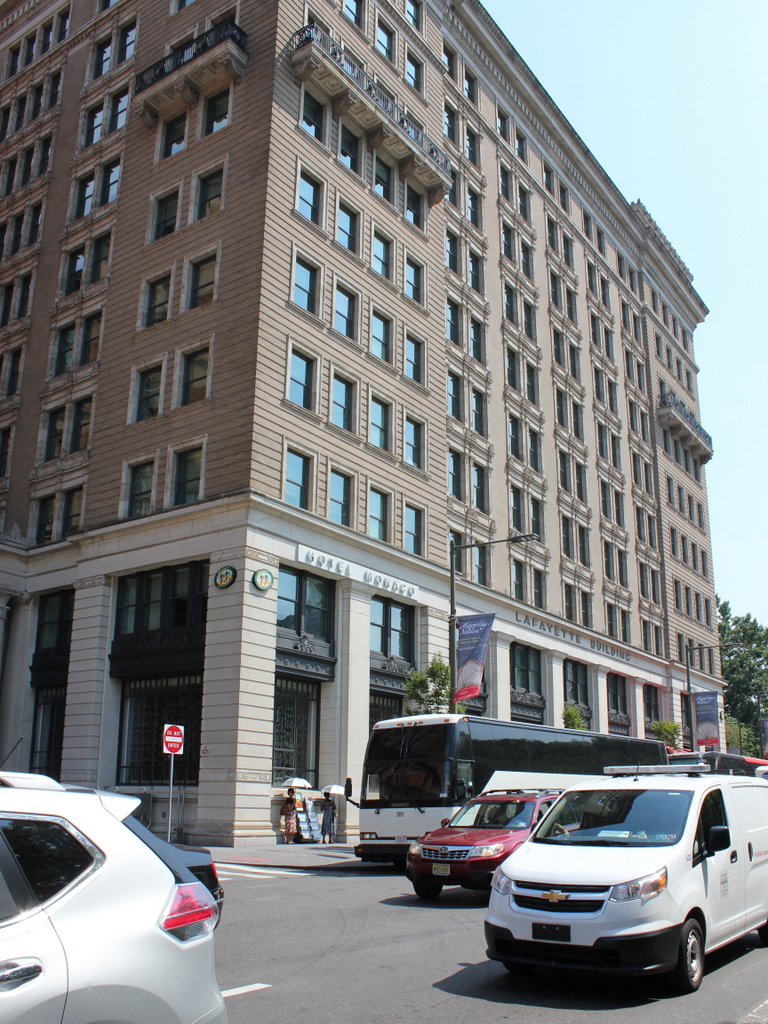 This scene is similar to the one in an earlier post, just from a little further south along Chestnut Street. The building in the foreground here was built sometime around the late 18th or early 19th centuries, and over the years it was occupied by several prominent people. Most notably, it was the home of artist Thomas Sully, who lived in the townhouse on the far left side, at 23 South Fifth Street, from 1826 until his death in 1872. He was best known as a portrait painter, and perhaps his most recognizable painting was of Andrew Jackson; the portrait was later incorporated into the modern $20 bill. His other works included the Seated Liberty design, which appeared on most American silver coins from 1836 until 1891.

Sully was living here when the first photo was taken in 1859, and immediately beyond his house, at 25 South Fifth Street, was the music store of George E. Blake. Originally from England, Blake came to America sometime before 1793, and became a music teacher in Philadelphia. He subsequently became a music publisher, and by around 1814 he was running his business out of this building, in the center storefront. He was still here nearly 50 years later in the first photo, and he operated the store until his death in 1871 at the age of 96.

The other important building in the first photo is the five-story cast iron building on the right side, at the corner of Fifth and Chestnut Streets. It was completed in 1855, at the height of the popularity of cast iron architecture, and it was owned by Frederick Brown, a druggist who had his business here. Among his products was Brown’s Essence of Jamaica Ginger, which promised to treat ailments such as “ordinary diarrhoea, incipient cholera, in short, in all cases of the digestive functions,” according to an 1861 newspaper advertisement. Brown had been in business since the early 1820s, originally in a much older building on this site, and in the early years he seems to have mostly been a local druggist. However, by the late 1850s his business had significantly expanded, and his Essence of Jamaica Ginger was available throughout the country.

This scene underwent a change soon after the first photo was taken. This section of Fifth Street was slated to be the home of the new Eastern Market, the precursor to the modern Philadelphia Bourse that stands there now. Part of this project involved opening Rainstead Street on the south side of the new building. However, in the original plan this would have required the demolition of Thomas Sully’s house. Sully and his wife Sarah requested that their house be spared, and the city agreed, choosing to modify the plan rather than forcing the distinguished elderly couple to relocate. The resulting compromise resulted in a street that was somewhat narrower, taking a portion of the yard on the left side of the house while leaving the house itself intact.

It seems unclear exactly when Sully’s house and the adjoining rowhouses were ultimately demolished. It could have been as early as the 1870s, after Sully died, but the houses were definitely gone by 1907, when the Lafayette Building was constructed on the site. This 11-story office building had its main entrance on Chestnut Street, where the Frederick Brown building had stood in the first photo, but it also spanned the entire length of Fifth Street from Chestnut to Rainstead Street. It is still standing here today, as shown in the 2019 photo, although it no longer functions as an office building; in the early 2010s it was converted into the Hotel Monaco.