Looking north on Rock Street from the corner of Pine Street in Fall River, around 1913-1920. Image courtesy of the Library of Congress, Detroit Publishing Company Collection. 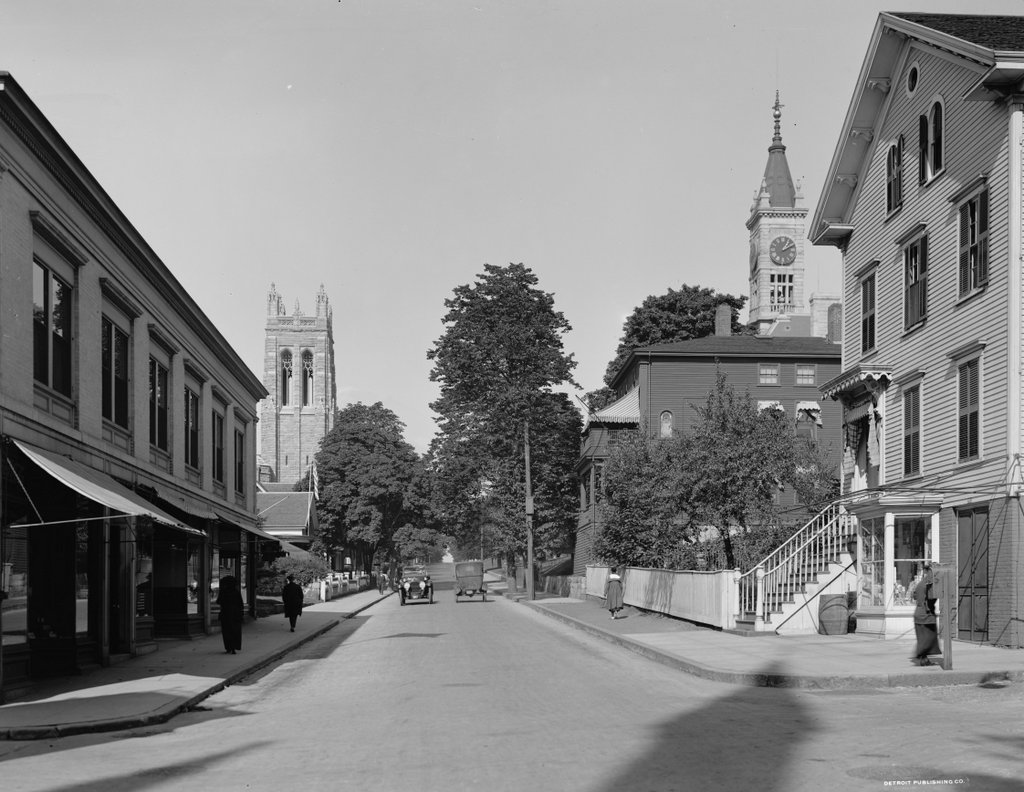 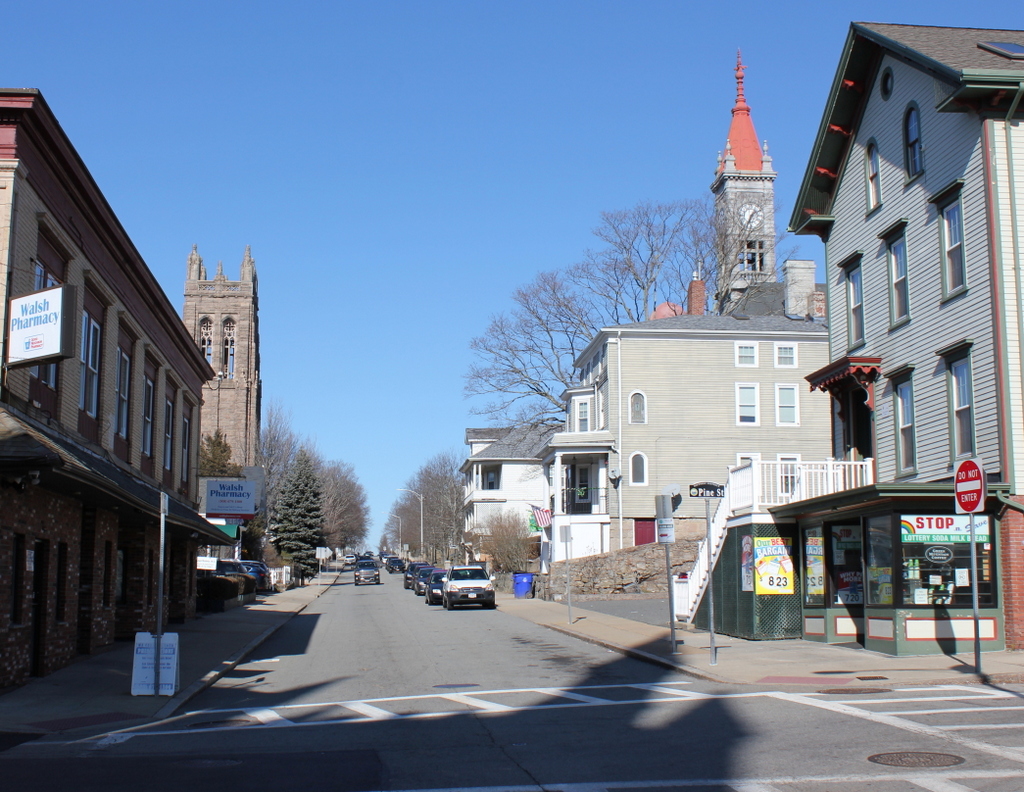 The first photo shows a street scene in Fall River with an interesting assortment of commercial storefronts, single-family homes, and multi-family homes, along with a church and a school. The buildings also vary widely in age; some date back to the 1840s, while others were built just a few years before the photo was taken. Remarkably, though, all of the buildings from the first photo are still standing today, and this scene does not look substantially different from its appearance more than a century ago.

The city of Fall River developed into a major textile manufacturing center during the early 19th century, and some of the oldest buildings in this scene were built during that time. In the distance, on the left side of the street, is a group of four houses, located at 222, 232, 242, and 254 Rock Street. The oldest of these, number 222, is hidden from view by the building in the foreground, but it was built around 1815. Just beyond it, and also hidden here, is number 232, built around 1848. Both of these buildings have had significant exterior alterations, but the two that are visible in the distance of this scene, at 242 and 254 Rock Street, were built in the mid-1840s and have remained well-preserved over the years. In particular, 254 Rock Street survives as an excellent example of Carpenter Gothic architecture.

On the right side of the street, the oldest building here is at 223 Rock Street, which is the three-story building just beneath the clock tower. It was built around 1845, but it was originally located at 151 Rock Street. It was moved to its current location in 1913, so its presence here in the first photo establishes the earliest possible date for the photo.

Closer to the foreground, on the far right side of the scene, is 201-203 Rock Street. It was built around 1861, and its original owner was Albert Winslow, a former New Bedford whaling ship captain who retired to Fall River. According to the 1861 city directory he ran a grocery store here at the house, presumably in the basement storefront, and the 1870 census shows him living here with his wife Permela, their five children, and his sister Rowena. By 1900 both Albert and Permela were still living here, as were their three daughters: Hope, Amelia, and Ella. Permela died in 1902, and Albert in 1908, but the three sisters were still here when the first photo was taken. They evidently rented a portion of the house, because both the 1910 and 1920 censuses show a second family living here.

Until the late 19th century, this section of Rock Street primarily consisted of small wood-frame houses. However, in 1886 the city constructed the B.M.C. Durfee High School a block to the north of here. Most of the building is hidden from view in this scene, but its prominent clock tower is visible in the distance on the right side of the photos.  Another major addition to this scene is the First Congregational Church, which stands opposite the high school building in the distance on the left side of Rock Street. The church was designed by the prominent architectural firm of Shepley, Rutan & Coolidge, and it was dedicated in January 1913, probably only a few years before the first photo was taken. Aside from the school and church, the other new building in the first photo was the Gee Building, the two-story commercial building in the foreground on the left side. It was built in 1910, at the northeast corner of Rock and Pine Streets.

Today, more than a century after the first photo was taken, some of the buildings here have undergone changes, but overall this section of Rock Street remains well-preserved. In the foreground, probably the most visible difference is the ground floor of the Gee Building, which has been completely altered from its early 20th century appearance. The storefront on the Winslow house across the street has also changed, but not to the same extent. Further in the distance, both the church and the high school are still standing, although the high school has since been converted into a probate and family courthouse. The only building in this scene that was constructed after the first photo was taken is the house in the distance at 253-255 Rock Street, which was built in 1923. Because of their preservation and historic significance, all of the buildings on this block of Rock Street are now part of the Lower Highlands Historic District, which was added to the National Register of Historic Places in 1984.