The view looking south toward Crawford Notch from the Crawford House in Carroll, New Hampshire, around 1900. Image courtesy of the Library of Congress, Detroit Publishing Company Collection. 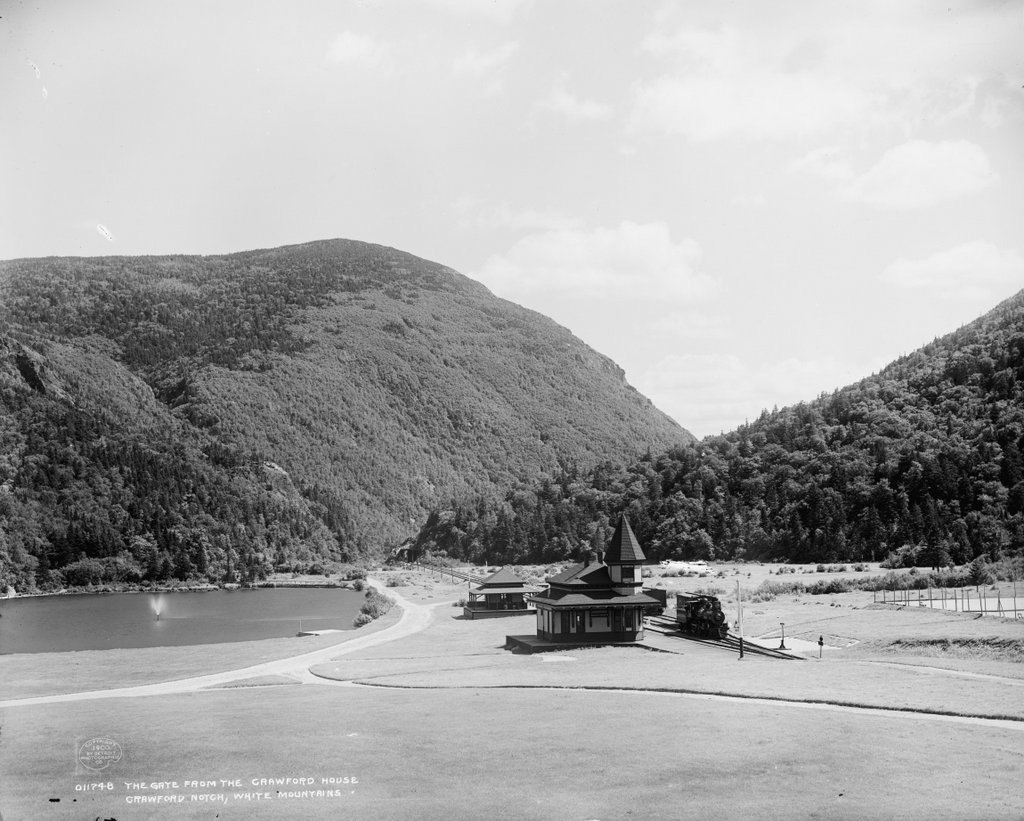 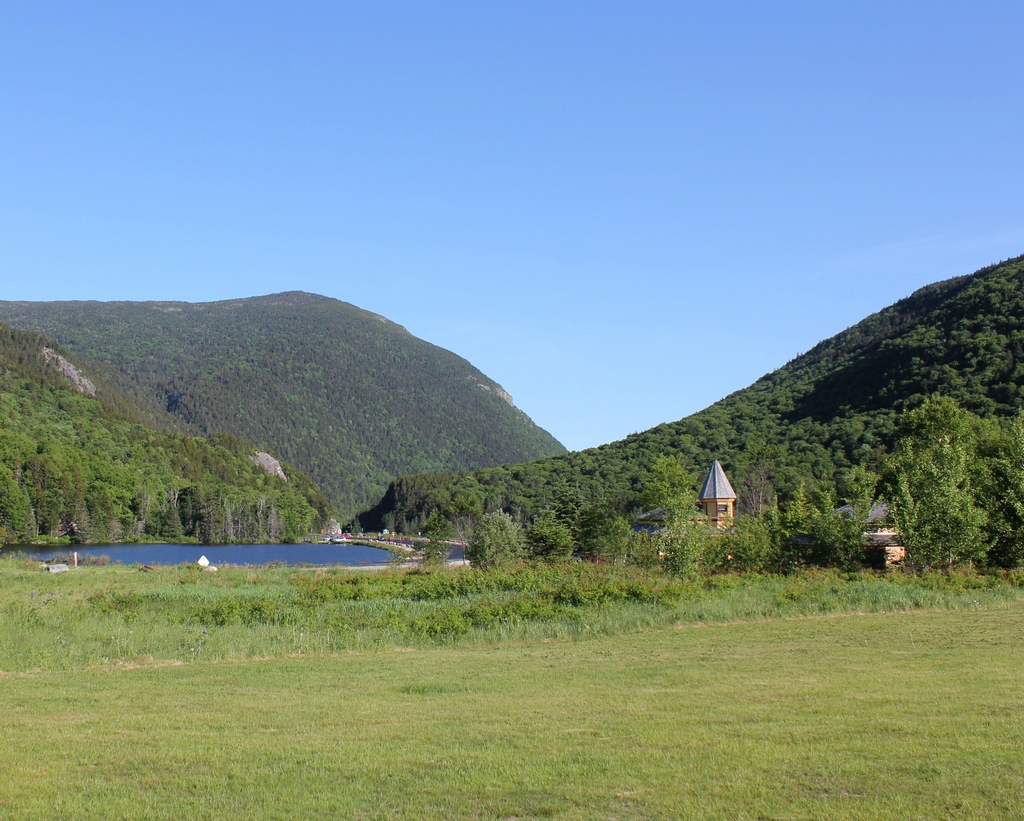 As explained in an earlier post that shows the view from the opposite direction, Crawford Notch is an important mountain pass that, for many years, was the only east-west route through the White Mountains. The notch, which was originally barely 20 feet wide, was unknown to European colonists until 1771, when two settlers discovered it while hunting. It soon became a major transportation corridor, beginning with a rough road that was later upgraded for stagecoach travel. By the late 19th century, a railroad also ran through the notch, as shown by the tracks and station building in both photos.

Like most mountain passes, Crawford Notch forms the divide between two major rivers. In the foreground of this scene is Saco Lake, the headwaters of the Saco River. From here, the river runs through the gap in the mountains, which is known as the “gates” of Crawford Notch. The river then flows through a narrow, steep-sided gorge for several miles, and it ultimately flows through Maine and into the Atlantic Ocean a little south of Portland. On the other side of the divide is the Crawford Brook, which rises just behind where these photos were taken and flows into the Ammonoosuc River. The Ammonoosuc River then flows into the Connecticut River, which eventually reaches the ocean in Long Island Sound.

These two photos show perhaps the most dramatic view of Crawford Notch, looking south from right about the point where the two watersheds divide. From here, the relatively broad, flat valley on the north side of the notch narrows to a small opening that is flanked by steep cliffs on either side. Just to the left of the notch is a rock formation known as Elephant Head, and on the right is the eastern slope of Mount Willard. However, the most prominent landscape feature here is Mount Webster, which forms an impressive backdrop to the scene. At 3,911 feet in elevation, its summit rises two thousand feet above the floor of Crawford Notch, and it forms the southern end of the Presidential Range.

Given the amount of traffic that was funneled through Crawford Notch, the area was the site of several hotels and inns in the early 19th century. Perhaps the most famous of these was the Willey House, located about three miles south of here. In 1826, the occupants of the inn were killed in a landslide, after they fled the house in the middle of the night in an effort to escape the falling rocks and mud. Ironically, the building itself was unharmed by the landslide, and the tragic event was subsequently immortalized in paintings and literary works.

Many accounts of the tragedy made it a moral lesson about the untamed power of nature, yet it did little to dissuade visitors to Crawford Notch. If anything, it seemed to have the opposite effect, and by the mid-19th century the area was no longer simply a convenient transportation corridor; it had become a destination in its own right. Among those who benefitted from this was the Crawford family, for whom the notch is named. In 1828, just two years after the landslide, Ethan Allen Crawford built the Notch House here at the gates of Crawford Notch, and his brother Thomas subsequently ran it for many years. From here, the Crawfords offered guided tours to the summit of Mount Washington via the 8.5-mile Crawford Path, which Ethan Allen Crawford and his father Abel had cut in 1819.

The original Notch House was located in the distance of this scene, close to the actual notch. However, in the early 1850s Thomas Crawford began construction on a new hotel just to the north, located where these two photos were taken. He ran into financial difficulties and had to sell the half-finished hotel, but it was completed under new ownership. However, the building was destroyed by a fire in 1859, and was subsequently rebuilt and reopened later in the year. Known as the Crawford House, it became a popular tourist destination throughout much of the 19th and 20th centuries. It ultimately closed in 1975, and burned two years later.

When the Crawford House opened, there was no rail service through Crawford Notch. However, this changed in 1875, when the Portland & Ogdensburg Railroad opened here. This railroad was subsequently acquired by the Maine Central Railroad in 1888, and in 1891 the new owners built a Queen Anne-style station here at the Crawford House, which is visible in the foreground of both photos. The first photo shows a locomotive at the station, Maine Central No. 101, a 4-4-0 steam locomotive that was built in 1889 and scrapped in 1916.

Today, around 120 years after the first photo was taken, relatively little has changed in this scene. Right behind where the photos were taken, the Crawford House is long gone, and it is now the site of the Appalachian Mountain Club’s Highland Center. However, the view south toward the notch looks much the same as it did in 1900, including the historic railroad station, Saco Lake, and the surrounding landscape. Most of the land within Crawford Notch is now part of the Crawford Notch State Park, which was established in 1913, and the surrounding land on the mountains is part of the White Mountain National Forest, which was established in 1918.