The summit of Mount Washington, seen looking north from Mount Monroe in the Presidential Range of the White Mountains, around 1900. Image courtesy of the Library of Congress, Detroit Publishing Company Collection. 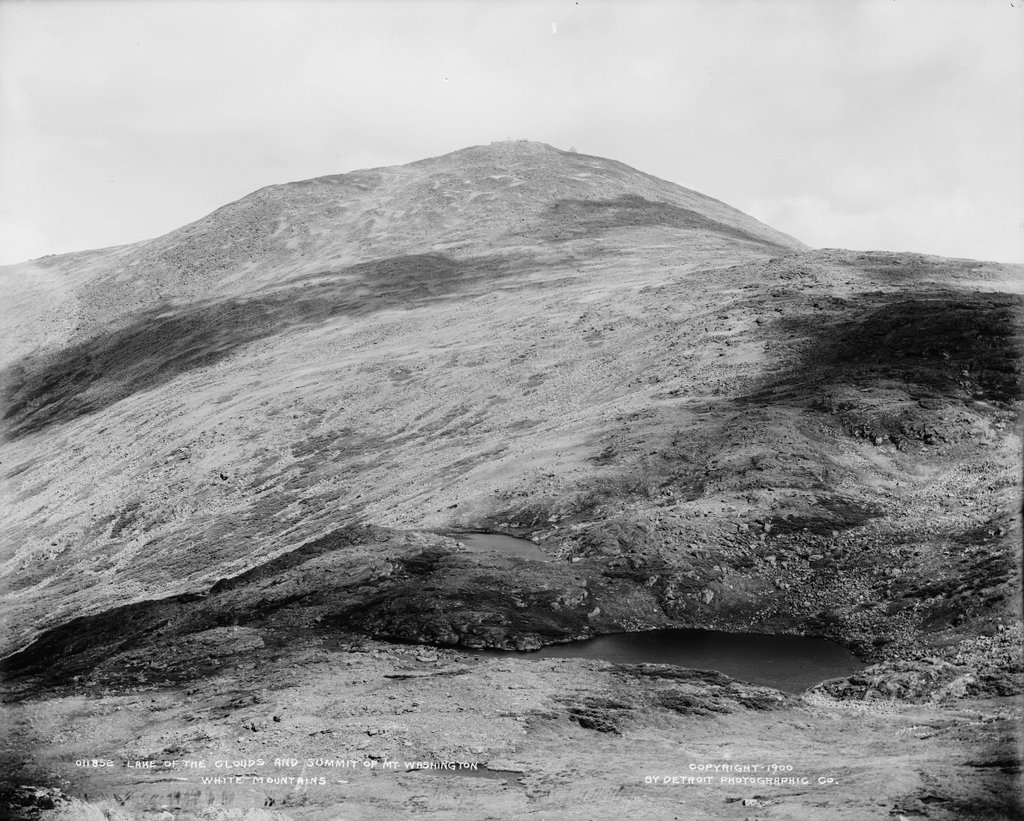 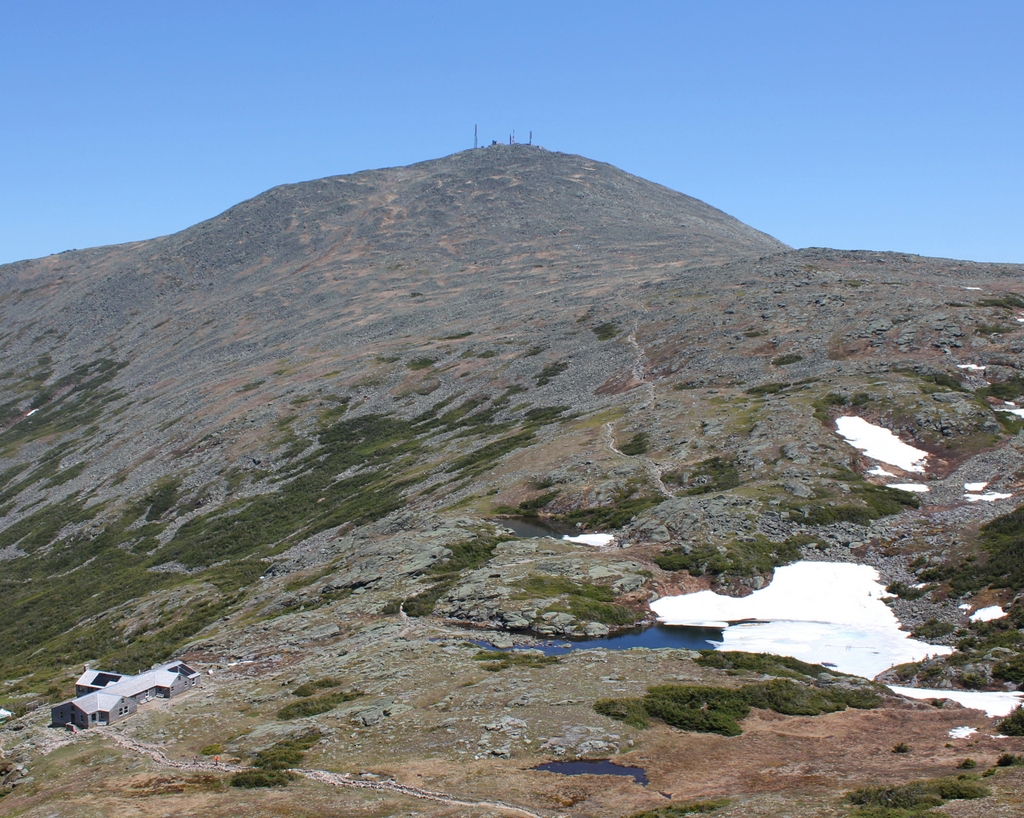 Rising 6,288 feet above sea level, Mount Washington is the highest peak in the northeastern United States. It stands at the center of the Presidential Range, a north-south oriented mountain range that forms a massive ridgeline of bare rocks and alpine vegetation. The range is infamous for its harsh and unpredictable weather, particularly at the summit of Mount Washington, which for many years held the world record for fastest surface wind speed ever recorded, at 231 miles per hour. Hypothermia is a year-round threat to hikers, and although there is no permanent ice cap, pockets of snow can linger well into the summer, as shown in the 2020 photo, which was taken on June 18.

Aside from Mount Washington, most of the other peaks in the range are also named for presidents. The five highest peaks are named after the first five presidents, in order of elevation, so that Mount Adams is the second-highest and Jefferson the third-highest. However, Mount Monroe, where these photos were taken from, is actually the fourth-highest, but it was named for the fifth president because of a surveying error. Monroe is the southernmost of these five major peaks; to the south are several lower peaks in the Presidential Range, including Mount Eisenhower and Mount Pierce.

Mount Washington’s high elevation and inhospitable climate have long attracted visitors to the summit. The first recorded ascent occurred in 1642, when Darby Field climbed the mountain accompanied by two Native American guides. Governor John Winthrop recorded the event in his diary, referring to the mountain as “the white hill,” since the mountain’s eventual namesake would not be born for another 90 years. Field’s exact route is uncertain, but he evidently approached it from the south, as Winthrop mentions two ponds along the way, which were likely the Lakes of the Clouds shown here in this scene. Aside from helping determine Field’s route, the mention of the lakes also helps to verify his ascent, since he would not have known about them unless he actually climbed at least this far.

The mountain was only occasionally climbed during the rest of the 17th and 18th centuries, but this began to change in the early 19th century. In 1819, local residents Abel and Ethan Allen Crawford cut an 8.5-mile path from Crawford Notch to the summit of Mount Washington, following the ridgeline of the southern Presidential Range. The trail passed through this scene just to the East of the summit of Mount Monroe, and most of it is still in use today as part of the Appalachian Trail, making it the oldest continuously-maintained hiking trail in the country. Ethan Allen Crawford built a cabin, and later a hotel, at the base of the trail, and he also acted as a guide for hiking groups setting out from Crawford Notch. The Crawford family later improved the trail for use as a bridle path, and by the 1840s visitors could ride to the top of the mountain on horseback.

The first building at the summit was a small hotel that opened in 1852. It was joined a year later by the rival Tip Top House, which still stands atop the mountain today. At the time, the only ways to get to the top were by foot or by horseback, but this would soon change. The Mount Washington Carriage Road opened in 1861, bringing visitors up the east side of the mountain, and the Mount Washington Cog Railway followed eight years later on the western slopes of the mountain. These two routes helped to spur more development, and by the time the first photo was taken around 1900 the summit was crowded with buildings, including the Tip Top House, a weather observatory, and the massive Summit House hotel, which could accommodate 150 guests. The summit even had its own daily newspaper, Among the Clouds, which was published during the summer months from 1877 to 1917.

By the late 19th century it was easier than ever to reach the summit, but many visitors chose to test their abilities by hiking up the mountain. However, because of the mountain’s notorious and often unpredictable weather, this sometimes led to tragic consequences for unprepared or unlucky hikers. The first known fatality in the Presidential Range was Frederick Strickland, who began his hike on October 19, 1849, when the mountain was already covered in deep snow. He climbed via the Crawford Notch, and he would have passed through this scene on his way up the mountain. Strickland made it to the top, becoming the first known hiker to do so in winter conditions, but he ultimately succumbed to hypothermia while descending the western side of the mountain. His body was discovered well below the tree line, near where the present-day Jewell Trail crosses Clay Brook.

One of the most famous tragedies on the mountain occurred on June 30, 1900, when William Buckingham Curtis and Alan Ormsbee both died of hypothermia while ascending the mountain. Both men were experienced outdoorsmen, and Curtis was renowned as an athlete and promoter of amateur athletics. As with Frederick Strickland a half century earlier, they hiked up the Crawford Path from Crawford Notch. Their goal was to attend the Appalachian Mountain Club meeting at the summit, but they faced harsh conditions along the way, including dense fog, sleet, and high winds. They climbed to the summit of Pleasant Dome (now Mount Eisenhower), and they were last seen alive soon after by a descending group that warned them of the deteriorating conditions ahead.

The first photo was probably taken within a year or two of Curtis’s and Ormsbee’s deaths, and it shows the section of the mountain where their journey came to an end. It is unclear as to whether they took the Crawford Path to the east of Mount Monroe, or if they took  the loop trail over the summit, but just to the north of Monroe they took shelter in a dense stand of stunted spruce trees. For unknown reasons, they subsequently left this shelter, and Curtis’s body was discovered a short distance beyond the trees, somewhere near the foreground on the far right side of these two photos. Ormsbee managed to continue up the mountain, but he ultimately died just a few hundred feet short of the summit.

In the aftermath of this tragedy, the Appalachian Mountain Club built a small shelter here in the area between Mount Monroe and Mount Washington, near the spot where Curtis died. It was completed in 1901, and was large enough for about six to eight people, yet uncomfortable enough to discourage use for anything other than an emergency situation. However, hikers nonetheless used the shelter for regular camping, and in 1915 it was replaced by the Lakes of the Clouds Hut, which was built a little lower on the slope on the far left side of the scene. Far more than just serving as an emergency shelter, this hit was staffed by the AMC, and provided overnight accommodations along with meals for hikers.

Today, around 120 years after the first photo was taken, Mount Washington remains a popular destination, accessible either by train, by car, or by foot. The Lakes of the Clouds Hut has been expanded several times over the years, and it now has bunk space for 90 hikers. The hut is located at the convergence of several major trails, including the Crawford Path, which still follows essentially the same route that the Crawford family laid out more than two centuries ago. The only significant change to the path is here between Mount Monroe and Mount Washington, where it was rerouted to access the hut, and to eliminate unnecessary switchbacks.

Overall, this scene has changed very little since the first photo was taken, aside from the construction of the hut. The surrounding land is now protected as part of the 750,000-acre White Mountain National Forest, which was established in 1918. The Presidential Range is a particularly important part of this national forest, as it features a number of rare alpine plants, including the Robbins’ cinquefoil, an extremely rare flower that can only be found here on the slopes of Mount Monroe. Because of the fragile nature of many of these plant species, combined with the thousands of people who climb Mount Washington each year, one of the present-day challenges here is balancing conservation with recreation in order to ensure that this view continues to remain unchanged for the next 120 years and beyond.