The view looking northeast toward Thoreau’s Cove in Walden Pond, around 1900-1910. Image courtesy of the Library of Congress, Detroit Publishing Company Collection. 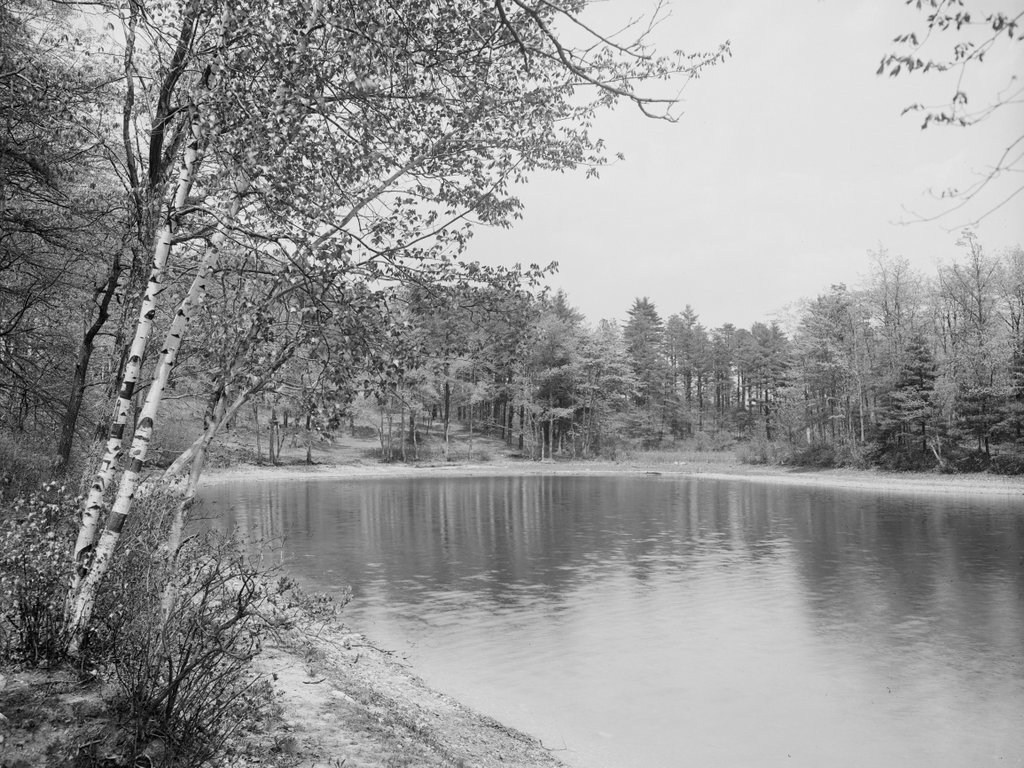 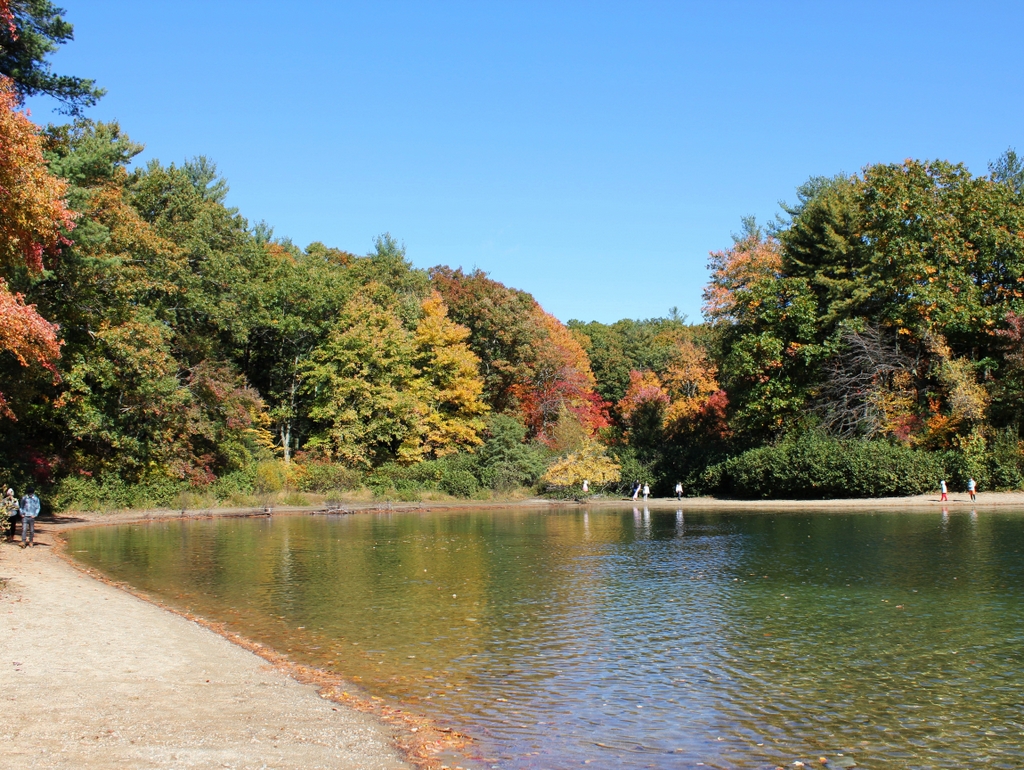 This small cove at the northern end of Walden Pond is known as Thoreau’s Cove, and it is explained in more detail in an earlier post. The photos in that post show the view looking south from the far end of the cove, while these two photos here show the view from the opposite direction. The cove is named for Transcendentalist writer Henry David Thoreau, who famously spent two years, two months, and two days living in a cabin here in the woods at Walden Pond, about 200 feet to the north of this cove.

Thoreau lived here from July 1845 to September 1847, and he subsequently wrote about his experiences in his 1854 book Walden. In explaining his daily routine, Thoreau wrote how, “I got up early and bathed in the pond; that was a religious exercise, and one of the best things which I did.” Later in the book, he explained how he would return to the pond after completing his morning work, writing, “[a]fter hoeing, or perhaps reading and writing, in the forenoon, I usually bathed again in the pond, swimming across one of its coves for a stint, and washed the dust of labor from my person, or smoothed out the last wrinkle which study had made, and for the afternoon was absolutely free.”

Thoreau did not identify the exact location on the shoreline where he bathed in the pond. However, author Robert M. Thorson, in his 2018 book The Guide to Walden Pond, concluded that it was this spot here, where these two photos were taken. Although the northern end of the cove was closer to his cabin, it is also shallow, muddy, and weedy, so it seems more likely that he walked the extra distance here to this spot, where he could access the water by way of a gravel beach. From here, Thoreau could also observe the entire pond, rather than having the very limited views from the northern end of the cove.

Near the end of the book, Thoreau described how he had inadvertently created a path between his cabin and the shoreline, writing “I had not lived there a week before my feet wore a path from my door to the pond-side; and though it is five or six years since I trod it, it is still quite distinct.” He used this path as a metaphor for the tendency of people to conform, and it served as an example for why he decided to move out of his cabin, because he needed to move on to something new.

By the time the first photo was taken at the turn of the 20th century, it had been more than 50 years since Thoreau had lived here. His old path was likely long gone by that point, but many more undoubtedly appeared in the intervening years. The pond became a popular destination during the second half of the 19th century, and from 1866 to 1902 it featured an amusement park at the western end, directly behind where these photos were taken.  Then, by the early 20th century the eastern end of the pond was also developed, and became a popular local swimming area.

The land around Walden Pond was ultimately donated to the state in 1922, and it became the Walden Pond State Reservation. Today, the pond is far busier than it had ever been during Thoreau’s time, particularly on summer weekends. However, the it attracts crowds throughout the year, and the 2020 photo shows plenty of people walking along the shoreline, despite it being a cool day in mid October. Overall, though. not much has changed here in this particular scene. The cove looks essentially the same as it did when the first photo was taken more than a century ago, and it likely looks similar to what Thoreau would have seen as he waded into the water here for his morning swim.