The site of Henry David Thoreau’s cabin at Walden Pond in Concord, around 1908. Image courtesy of the Library of Congress, Detroit Publishing Company Collection. 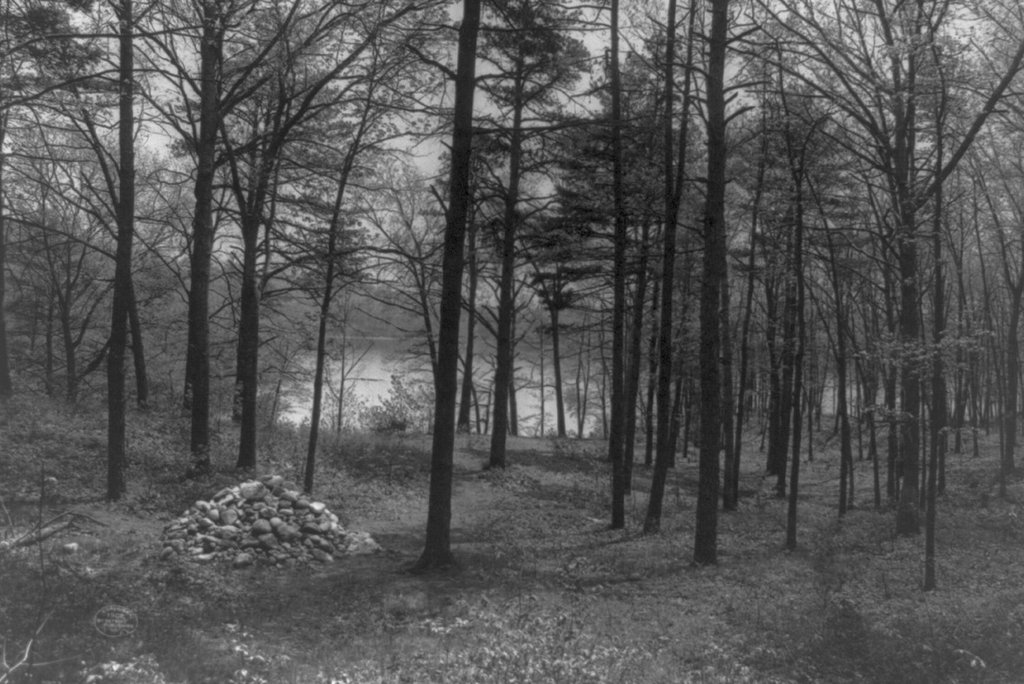 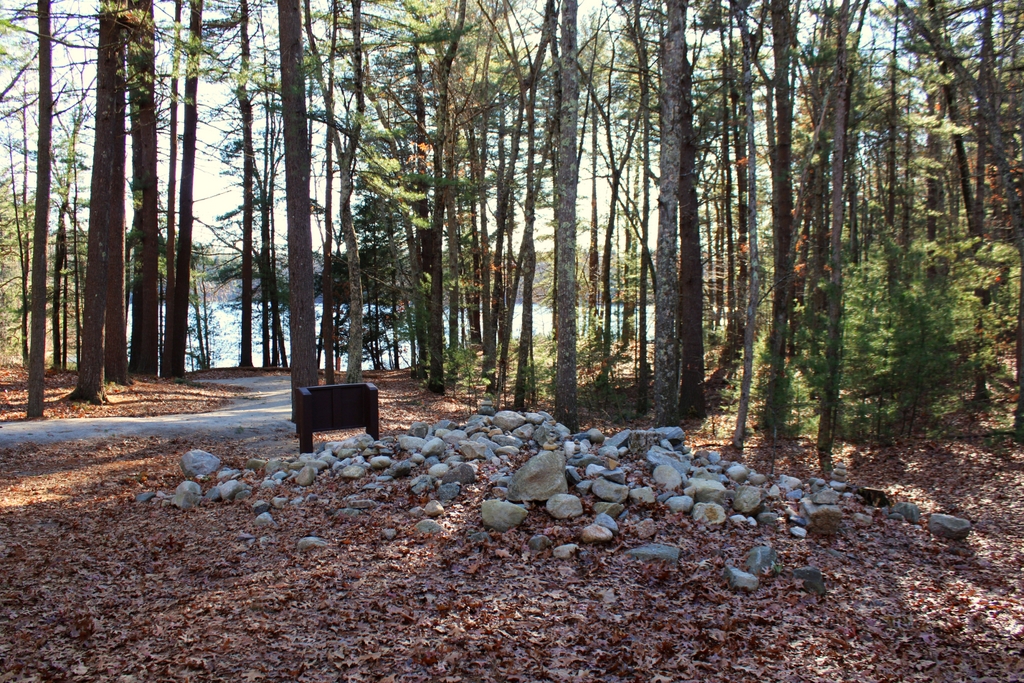 As explained in the previous post, Walden Pond was made famous by Transcendentalist writer Henry David Thoreau, who spent two years, two months, and two days living in a cabin here on the northern shore of the pond from 1845 to 1847. At the time, Concord was at the center of the Transcendentalist movement, and it was the home of several of its leaders, including Thoreau and his mentor, Ralph Waldo Emerson. They placed a strong emphasis on values such as being self-reliant, living a simple and nonmaterialistic life, and having an appreciation for the natural world. Because of this, Thoreau decided to embark on an experiment here at Walden Pond, in order to determine whether he could, as he put it, “front only the essential facts of life” by living in a small cabin with only the basic necessities of human life.

Thoreau wrote about his experience in his book Walden, published in 1854. In the first chapter, titled “Economy,” he described how he selected this site and began constructing the cabin in the spring of 1845, writing:

Near the end of March, 1845, I borrowed an axe and went down to the woods by Walden Pond, nearest to where I intended to build my house, and began to cut down some tall, arrowy white pines, still in their youth, for timber. . . . It was a pleasant hillside where I worked, covered with pine woods, through which I looked out on the pond, and a small open field in the woods where pines and hickories were springing up.

He steadily worked on the cabin throughout the spring, and it was finally ready to be occupied by early July. His first night here was on July 4, a coincidence that marked the start of his own personal independence:

When first I took up my abode in the woods, that is, began to spend my nights as well as days there, which, by accident, was on Independence Day, or the Fourth of July, 1845, my house was not finished for winter, but was merely a defence against the rain, without plastering or chimney, the walls being of rough, weather-stained boards, with wide chinks, which made it cool at night. The upright white hewn studs and freshly planed door and window casings gave it a clean and airy look, especially in the morning, when its timbers were saturated with dew, so that I fancied that by noon some sweet gum would exude from them.

Thoreau ultimately completed the cabin by winter, including shingling the exterior and constructing a chimney and fireplace. The finished structure was, as he described it, “a tight shingled and plastered house, ten feet wide by fifteen long, and eight-feet posts, with a garret and a closet, a large window on each side, two trap doors, one door at the end, and a brick fireplace opposite.” In Walden, he itemized his construction costs, which added up to $28.12. The single largest expense was $8.03 for wood, much of which was recycled materials. In April he had purchased the shanty of James Collins, an Irish laborer who worked on the nearby Fitchburg Railroad, and he used this as a source of building materials.

The interior of the cabin was as spartan as its exterior, consisting of only minimal furnishings and personal possessions. Of these, he provided the following description:

My furniture, part of which I made myself, and the rest cost me nothing of which I have not rendered an account, consisted of a bed, a table, a desk, three chairs, a looking-glass three inches in diameter, a pair of tongs and andirons, a kettle, a skillet, and a frying-pan, a dipper, a wash-bowl, two knives and forks, three plates, one cup, one spoon, a jug for oil, a jug for molasses, and a japanned lamp.

Throughout the “Economy” chapter, Thoreau meticulously recorded his income and expenses, and concluded that, by simplifying his life, he was able to meet all of his expenses by working just six weeks out of the year. In contrast to his assertion earlier in the chapter that “[t]he mass of men lead lives of quiet desperation,” Thoreau argued based on his experiment here at Walden that:

In short, I am convinced, both by faith and experience, that to maintain one’s self on this earth is not a hardship but a pastime, if we will live simply and wisely; as the pursuits of the simpler nations are still the sports of the more artificial. It is not necessary that a man should earn his living by the sweat of his brow, unless he sweats easier than I do.

One popular misconception about Thoreau’s time here at Walden Pond is that he lived the life of a hermit in the wilderness. In reality, he was only a mile and a half from the center of Concord, and he often walked into town by way of the railroad, which ran just a quarter mile from here. As suggested by the presence of three chairs in the cabin, he also entertained guests here, although he found that the distance from town discouraged people from visiting for trivial reasons. In his book, he also wrote about interactions with other people who came to the pond for its natural resources, including fishermen and ice harvesters.

Thoreau moved out of the cabin on September 6, 1847, having decided that it was time to move on to the next stage in his life. It took another seven years before he completed his famous memoir about his stay here, and in the meantime his old cabin was put to a new use. Two years after Thoreau left, Ralph Waldo Emerson—who owned this land—sold the cabin to his gardener, who in turn sold it to two farmers. It was moved to a new location elsewhere in Concord, and it was used for grain storage for the next few decades, before ultimately being dismantled in 1868 and used for scrap. Thoreau did not live to see this, as he had died in 1862 at the age of 44, but he likely would have approved, considering he had built it from scrap lumber salvaged from an earlier structure.

In the meantime, the old site of Thoreau’s cabin began to attract attention as early as 1872, when Bronson Alcott—father of Louisa May Alcott—brought a visitor, Mrs. Mary Adams of Dubuque, Iowa, here to Walden Pond. At the time there was no marker here, so Mary suggested that a cairn might be an appropriate memorial. Writing in his journal, Alcott explained:

Mrs. Adams suggests that visitors to Walden shall bring a stone for Thoreau’s monument and begins the pile by laying stones on the site of his hermitage, which I point out to her. The tribute thus rendered to our friend may, as the years pass, become a pile to his memory. The rude stones were a monument more fitting than the costliest caring of the artist. Henry’s fame is sure to brighten with years, and this spot be visited by admiring readers of his works.

By the time the first photo was taken at the turn of the 20th century, the cairn had grown to a considerable size. The view faces essentially due south, with the pond visible beyond the trees in the distance. In the center of the photo is Thoreau’s Cove, the northernmost part of the pond, which comes within about 200 feet of the site of the cabin. The types of trees here are similar to what Thoreau would have seen, with a mix of pine and deciduous trees, but these actual trees were likely not old enough to have been here during Thoreau’s stay in the 1840s.

The cairn does not actually stand on the exact site of the cabin, although it is within a few yards. The actual location of the cabin was discovered in 1945 by archaeologist Roland W. Robbins, who uncovered the foundation of Thoreau’s chimney. These two photos were taken from right about the spot where the house stood, and it is now marked by an inscribed stone above the foundations of the chimney, along with nine cut stones that mark the dimensions of the cabin.

Today, aside from the stones marking the site of the cabin, the cairn is also still here. It is much larger than it was in the early 1900s, but it was briefly removed by state officials in 1975, before being returned here in 1978 after a public outcry over the loss of the “unsightly” memorial. Aside from the enlarged cairn, other changes since the first photo have included the path on the left, along with the sign next to the cairn, which features Thoreau’s famous quote about going into the woods because he “wished to live deliberately.” Overall, though, this scene still looks much the same as it did when the first photo was taken, and it is not all that different from what Thoreau would have seen from his front door some 175 years ago.

The pond and the surrounding land are now part of the Walden Pond State Reservation, which was established in 1922 after the Emerson family and several other landowners donated property around the pond to the state. Since then, the pond has continued to draw visitors for a variety of purposes, including swimming, fishing, walking the perimeter of the pond, or making a pilgrimage here to the site of Thoreau’s cabin. Although it is not located here at the original location, the park does feature a full-size replica of the cabin, which stands next to the parking lot a little less than a half mile from here, on the other side of Route 126. The following photos show the exterior and interior of the cabin, and were taken in 2021: