Pennsylvania Station, seen from the corner of 7th Avenue and 31st Street in New York City, probably in 1912. Image courtesy of the Library of Congress, Detroit Publishing Company Collection. 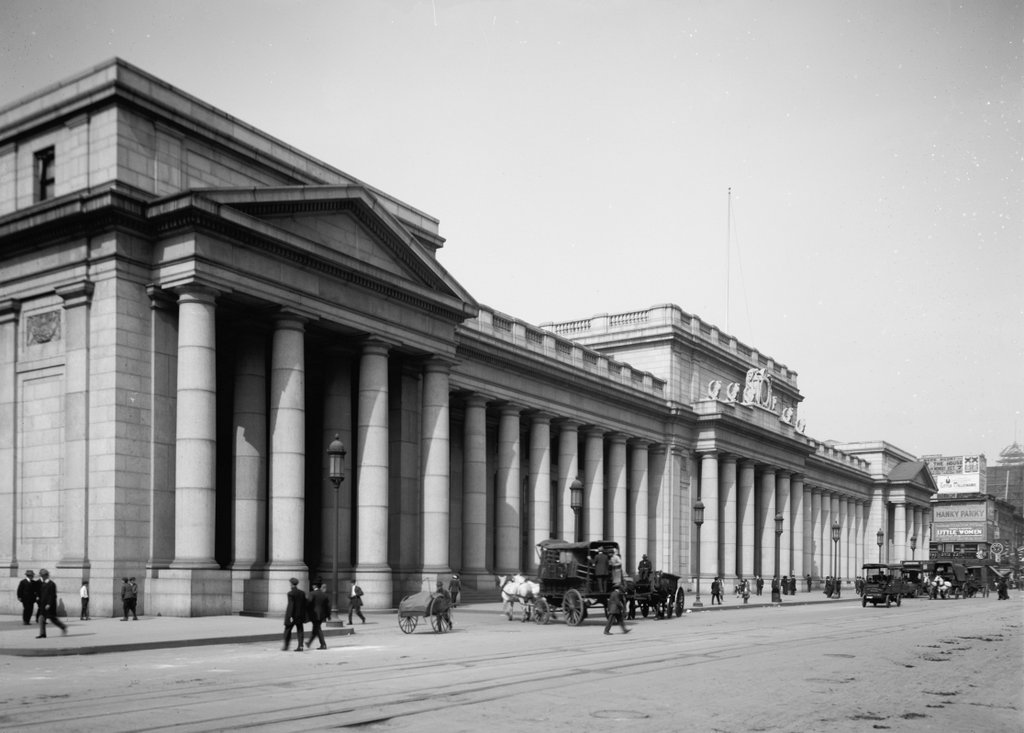 Pennsylvania Station on May 5, 1962. Image courtesy of the Library of Congress, Historic American Buildings Survey Collection. 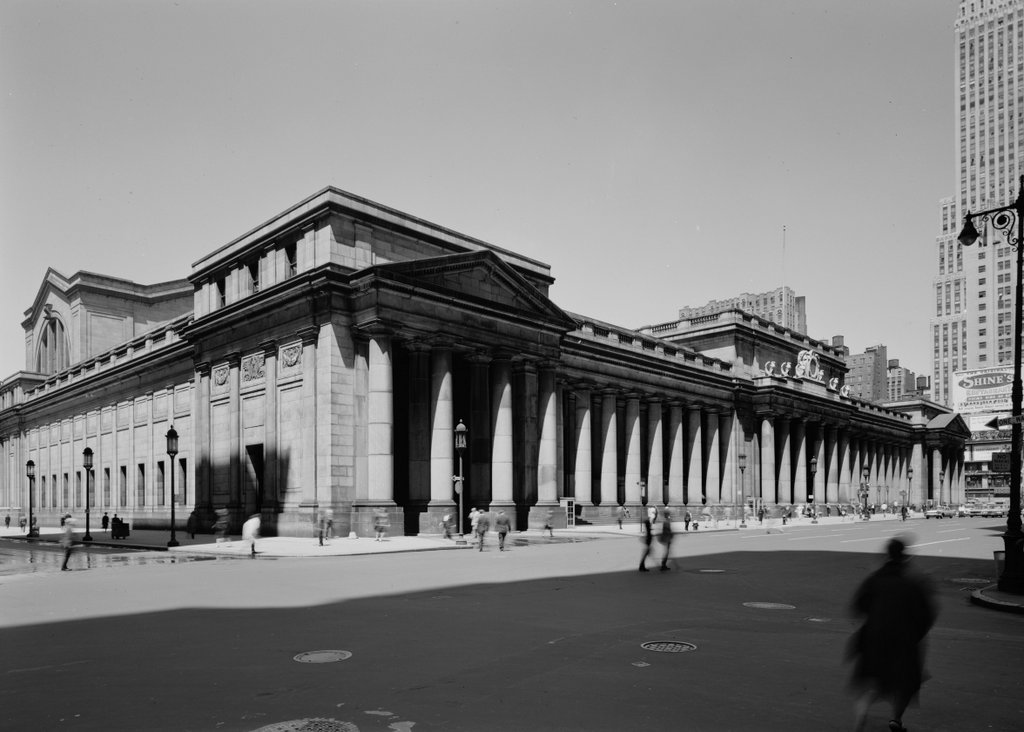 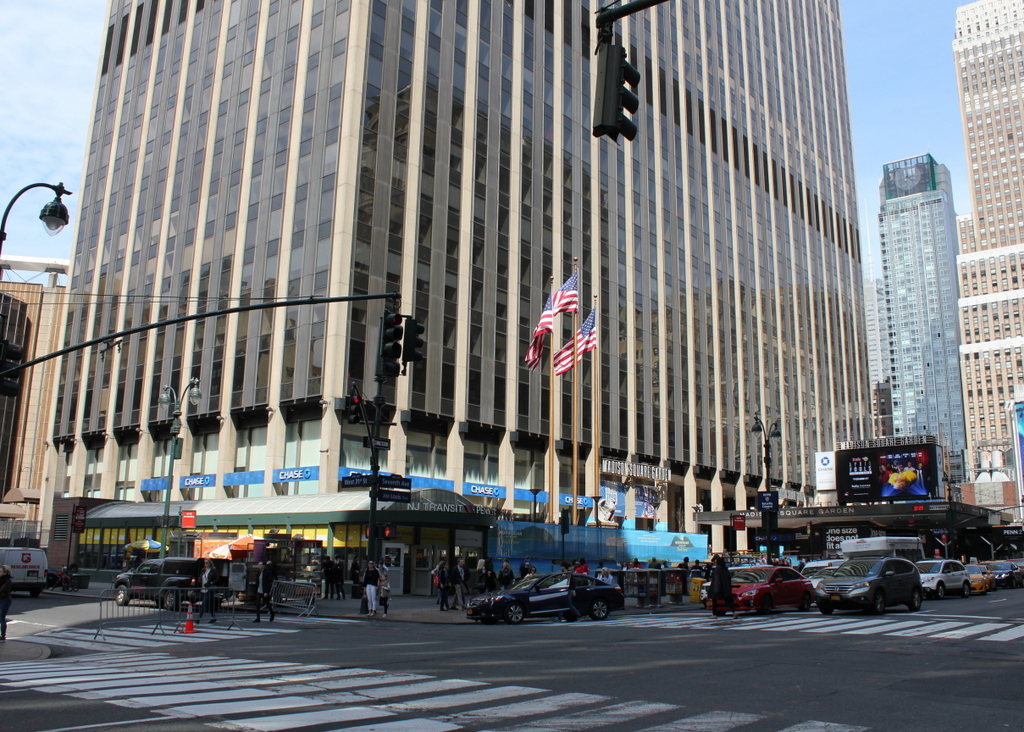 During the heyday of rail travel in the late 19th and early 20th century, passenger stations in major cities were typically large, ornate buildings. As the first place that most travelers would see upon arriving in a new city, these stations sought to convey a strong first impression by demonstrating the importance and grandeur of both the city and the railroad company. Consequently, when the Pennsylvania Railroad—one of the largest corporations in the world at the time—constructed a rail line into the largest city in the country, it built what was arguably the grandest railroad station in American history.

Throughout the 19th century, the Hudson River was a major obstacle for railroad traffic heading to and from New York City. At the time, Manhattan’s only direct rail link was to the north, across the narrow Harlem River. This connected the city to upstate New York, New England, and other points north and east, but travel was much more difficult when heading south or west. In the absence of bridges or tunnels, the only way for these railroads to reach Manhattan was by ferry from the New Jersey side of the river.

As early as the 1880s there were proposals to bridge the Hudson, but these would have been prohibitively expensive, given the necessary height of the bridge and the amount of valuable Manhattan real estate that would have been required for the approaches. The only other option was to tunnel under the river, but this did not become a viable alternative until the development of electric locomotives, as there would have been no way to provide ventilation for steam locomotives in the tunnel. Even then, it would entail significant expense and engineering challenges along the way, not least of which was the difficulty of tunneling through the viscous mud on the riverbed.

The final plans consisted of two parallel tunnels under the Hudson River, which would bring Pennsylvania Railroad trains into the heart of Manhattan at a new station in midtown. This would be done in conjunction with the Long Island Rail Road, which was building similar tunnels under the East River. These tunnels would meet the Pennsylvania Railroad here at the new station, providing direct rail access to Manhattan for Long Island commuters.

Work on both the Hudson River and East River tunnels began in 1904, as did the excavation work for the new Pennsylvania Station. The station site occupied two full city blocks, and it was bounded by West 31st Street, West 33rd Street, 7th Avenue, and 8th Avenue, in the middle of the city’s Tenderloin neighborhood. This spot was four blocks west and nine blocks south of the city’s other major rail hub, Grand Central Terminal, which was operated by the Pennsylvania Railroad’s rival, the New York Central.

Pennsylvania Station included 11 tracks and 21 platforms, but its most notable feature was its above-ground portion, shown here in this view along 7th Avenue. The massive building was designed by the prominent architectural firm of McKim, Mead & White, and it is often regarded as their magnum opus. It featured ornate Beaux-Arts architecture, with an exterior of pink granite that was lined with columns and other classically-inspired elements. Here on the east side of the building, the main entrance was topped by a large clock, with allegorical representations of Day and Night on either side. The clock was also flanked by six eagles, with three on each side. All of these statues, along with the matching figures above the other three entrances to the station, were the work of noted sculptor Adolph Weinman, who is perhaps best known for designing the Mercury dime and the Walking Liberty half dollar.

On the interior, the main entrance opened to a 225-foot long, 45-foot wide arcade that was lined with shops. This led to the main waiting area in the center of the building, which spanned the width of the station from West 31st Street to West 33rd Street and featured a ceiling that rose 150 feet above the floor. It was said to have been the largest such waiting room in the world at the time, and it included ticket offices, baggage check windows, and telephone and telegraph offices, in addition to two smaller adjoining waiting rooms, with one for men and one for women. Beyond the waiting room, on the west side of the building, was the main concourse, with its distinctive iron and glass arched ceiling. The station also included two covered carriage drives, which led down to the lower level. These were located on the north and south sides of the station, and they were accessed here on the 7th Avenue side, beneath the pediments on the left and right side of this scene.

Pennsylvania Station was completed in the late summer of 1910, and part of it opened on September 8. The rest of the station opened on November 27, drawing an estimated 100,000 visitors throughout the day, in addition to the 25,000 passengers on the more than 80 trains that arrived and departed from here. Aside from a few short early morning delays the opening went smoothly, and the station was easily able to accommodate the large crowds. Reporting on the opening day, the New-York Daily Tribune described the station as a “fresh mechanical miracle,” and further noted:

And in thousands they flooded the acres of its floor space, gazed saucer eyed like awestruck pigmies at the vaulted ceilings far above them, inspected curiously the tiny details of the place, so beautifully finished, on their own level and pressed like caged creatures against the grill which looked down upon subterranean tracks, trains and platforms. W. W. Egan, the station master, was of the opinion that some of them had been there all night. There was no let up all day, at all events, and late last night the steel and stone palace still entertained its thousands of liliputian admirers swarming in and out and round about.

Aside from its colossal dimensions and great distances, the most noteworthy feature of this human achievement is its silence. It’s too big to be noisy, too dignified in its spaciousness for staccato sounds. The steady hum of its tense life spells only peace, like the drone of bees in a summer garden. The stealthy trains circulate in its underworld unnoticed. Even the announcers’ calls fade into faraway song, echoing in a canyon.

The hordes of sightseers caused no indigestion in the huge maw of this monster. Passengers came and went or waited without inconvenience or crowding, though they were outnumbered fifty to one. A delay here and there in providing car equipment, due to untried complications at the Harrison transfer station, only accentuated the general smoothness with which the eighty-four trains to and from the West were operated.

The first photo was taken within a year or two after the station opened, probably sometime in 1912. The presence of many horse-drawn vehicles suggests an early 1910s date, but the most helpful clues in dating the photo are the advertisements for Broadway shows, which are visible on the extreme right side of the photo. These productions, which include The Master of the House, The Little Millionaire, Hanky Panky, and Little Women, all premiered in either 1911 or 1912.

Penn Station, as it was commonly known, remained in use throughout the first half of the 20th century, with ridership here peaking during World War II. However, this quickly began to change after the end of the war, as commercial airlines and private automobiles began to eclipse railroads for long-distance travel. Railroads across the country began to struggle financially, including the once-mighty Pennsylvania Railroad, which had difficulty maintaining its iconic station here in New York.

This neighborhood, which had been a red light district prior to the construction of Penn Station, was valuable Midtown real estate by the mid-20th century. In addition, the cavernous station that had so impressed visitors in 1910 was both costly and underutilized, so in 1954 the railroad optioned the air rights to a developer. This agreement would allow for the demolition of the above-ground portion of the station, leaving only the tracks and platforms from the original structure.

Nothing came of this initial plan, but in 1962 the site became the subject of a new redevelopment proposal, which would involve demolishing the station, constructing a new, smaller station underground, and building a new Madison Square Garden and an office building atop it. The second photo was taken around this time, in May 1962, evidently as part of an effort to document the building’s architecture before its demolition. By this point, the interior had undergone some significant changes since the station opened, but the 7th Avenue facade was largely unchanged from this angle, aside from the accumulation of a half century of grime on the pink granite walls and columns.

These redevelopment plans caused significant controversy, as Penn Station was still a major New York landmark, despite the reduced importance of rail travel. However, demolition began in October 1963, just over a year after the second photo was taken, and the building was mostly gone by 1966. Madison Square Garden opened in 1968, and occupied the western two-thirds of the site. In the present-day scene, it is barely visible on the far left side of the photo. To the east of it is an office building, which stands in the foreground of the photo along 7th Avenue.

The reconstructed Penn Station was also completed in 1968, although almost none of it can be seen above ground aside from the entrances, one of which is visible in the lower right side of the photo. It remains in use as New York’s primary intercity rail station, and it is the busiest station in North America, with an annual ridership of over 100 million. However, it lacks all of the grandeur and architectural distinction of its predecessor, and its design is particularly unimpressive compared to the historic Grand Central Terminal, which still stands as the city’s other major railroad station.

In hindsight, though, the loss of the original Penn Station may not have been entirely in vain. The demolition helped to draw attention to the need for historic preservation, at a time when many important buildings were being lost to urban renewal projects in cities across the country. Here in New York, it led to the creation of the New York City Landmarks Preservation Commission, in order to protect significant buildings in the city. These included Grand Central Terminal, which was threatened by a similar redevelopment proposal that would have put a skyscraper atop the station building. This was successfully blocked by the Commission, and their ruling was upheld in a 1978 Supreme Court decision, thus preserving Grand Central in its historic appearance.