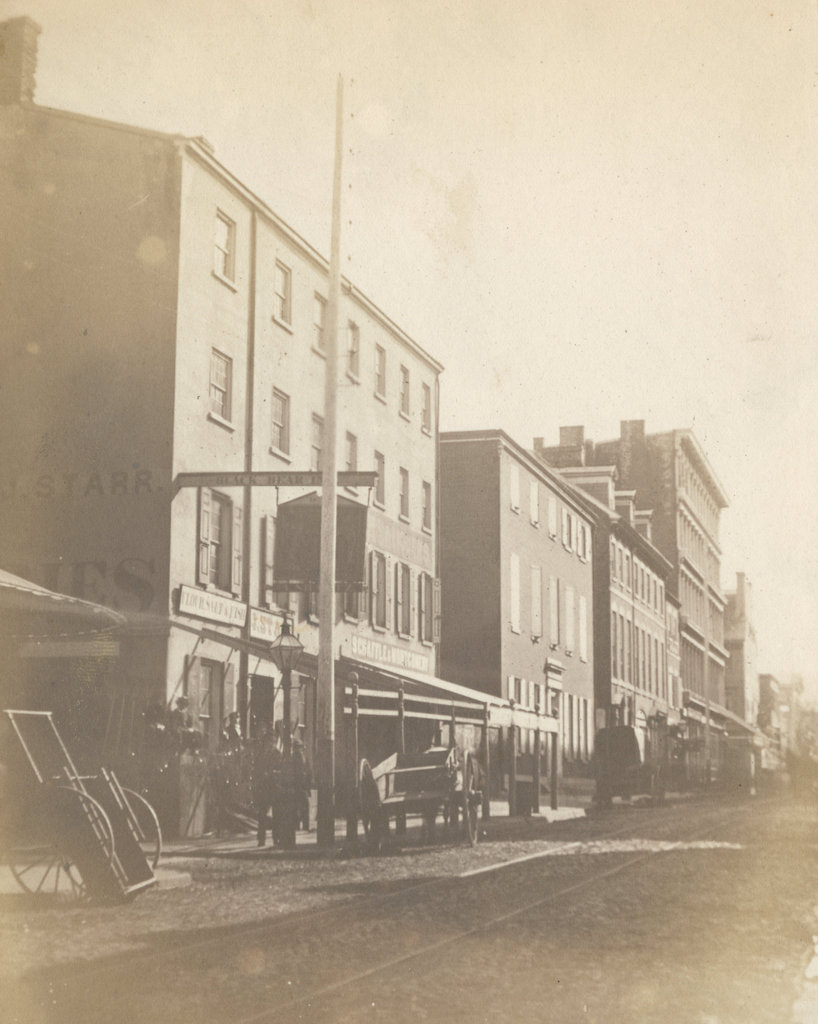 The scene around 1904. Image courtesy of the Library of Congress, Detroit Publishing Company Collection. 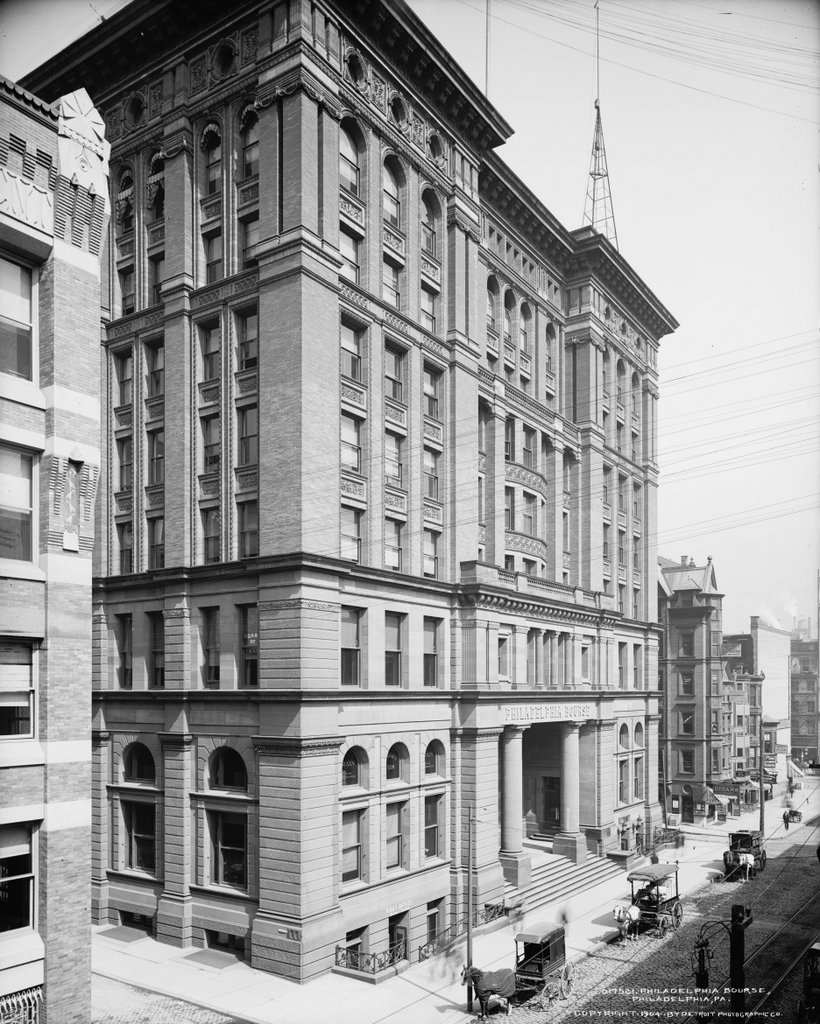 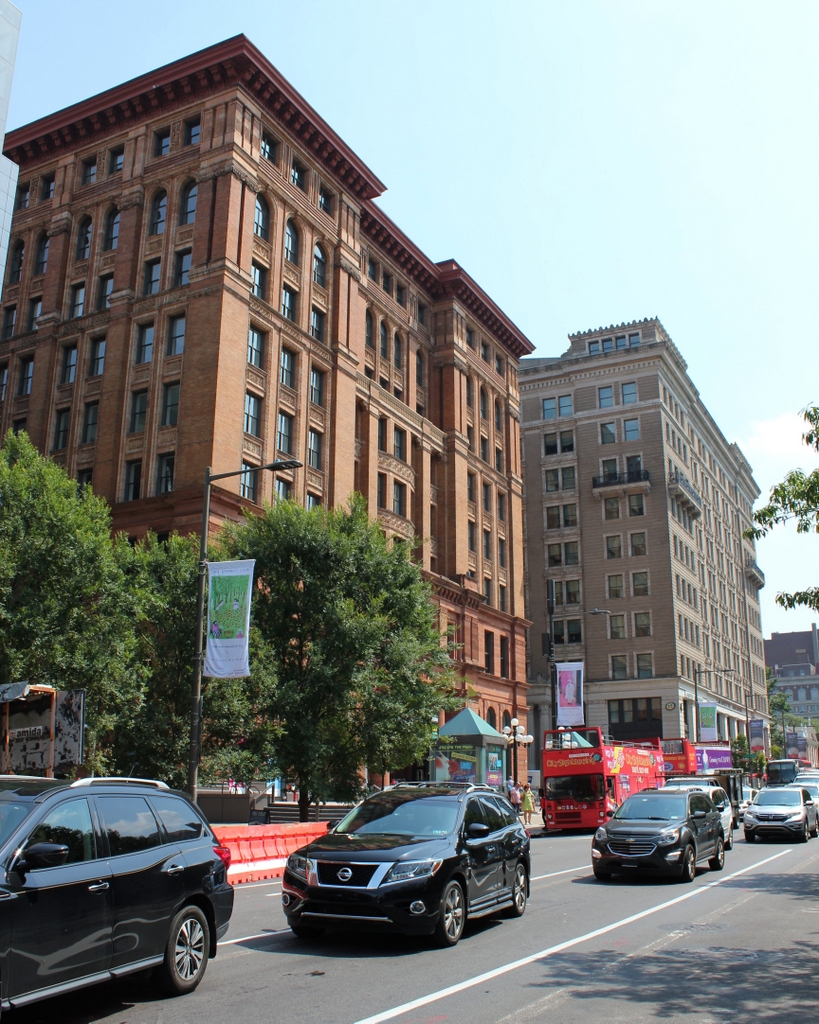 The first photo was taken in February 1859, showing the scene looking south on South 5th Street from near Market Street. In the foreground on the left is the Black Bear Inn, a four-story hotel that was built around 1816. The inn itself had been in operation since the 18th century, and it was originally located around the corner on Market Street before moving to this building. It was still in operation when the first photo was taken, and by this point the building had several other commercial tenants as indicated by the signs, including grocer Jeremiah Starr and wine and liquor dealers Schaffer & Montgomery.

Further down the street were several other early 19th century buildings. Among these was a group of rowhouses, visible to the right of the center of the photo with three dormer windows on the roof. The one furthest to the left, at 23 South 5th Street, was at the time the home of noted portrait artist Thomas Sully. Although born in England, Sully spent most of his life in Philadelphia, and he lived in this house for many years. During his long career he painted a number of prominent individuals, and he was responsible for the Seated Liberty coin design. Many years after his death, his work made another appearance on American money when his portrait of Andrew Jackson was incorporated into the design of the $20 bill.

The Black Bear Inn was ultimately demolished soon after the first photo was taken, and it was replaced by the Eastern Market, which opened here in November 1859. This building remained in use as a marketplace throughout the next few decades, but it was ultimately demolished in the early 1890s in order to construct the Philadelphia Bourse, which is shown here in both the second and third photos.

The Bourse was established in 1891 as a commodities exchange. Its founder, George E. Bartol, modeled it after the Bourse in Hamburg, Germany, and it was located in temporary quarters for several years while this building was under construction. The work was completed in 1895 after two years of construction, at a cost of about $2.4 million, equivalent to about $75 million today. It was designed by the noted Philadelphia architectural firm of G. W. & W. D. Hewitt, and it was one of the city’s first steel-frame skyscrapers.

When the building opened on October 1, 1895, its tenants included the Board of Trade, the Trades League, the Lumbermen’s Exchange, the Grocers and Importers Exchange, and the Hardware Merchants and Manufacturers’ Association. The Bourse soon became the commercial center of the city, and by the early 20th century it was also occupied by the Commercial Exchange, the Maritime Exchange, the Paint Manufacturers’ Club, and the Drug Exchange. Other tenants during this period included the Philadelphia offices of the Government Weather Bureau and the Navy’s Hydrographic Office, along with a variety of railroad and steamship agencies and other businesses.

In 1916, on the 25th anniversary of its establishment, the Philadelphia Inquirer published an article on the Bourse, in which it praised the effect that it has had on the city’s commerce, noting:

The Philadelphia Bourse is the only institution of its kind in the United States and in some of its features probably is better known outside of Philadelphia than by the people of this city. It is an application to Philadelphia of the European Bourse idea, a building in which merchants may meet to facilitate the transaction of business and which may house various commercial and business organizations, such as the Bourse du Commerce of Paris and the Bourses of Hamburg and Vienna. . . .

From a venture supported by farsighted and progressive business men in twenty-five years the Philadelphia Bourse has developed into an institution of national reputation. It has played a leading part in the development of the port and commercial life of this city and vicinity and within recent years it had taken an influential position in the commercial matters of the entire country.

The Bourse continued to function as a commodities exchange until the 1960s. Since then, it has been used for retail and commercial office space, and it now includes a food court on the ground floor. The building underwent a major $40 million renovation from 2016-2018, and today it remains well-preserved, with few exterior changes since the second photo was taken more than a century ago.

However, the Bourse is the only surviving building from the second photo. The buildings further in the distance were demolished a few years later to make room for the Lafayette Building, which was completed in 1907 and still stands at the corner of South 5th and Chestnut Streets. The building on the far left side in the foreground is also gone, as are all of the buildings on the opposite side of South 5th Street, which were demolished in the mid-20th century to create the Independence Mall.