Looking east on William Street from the corner of Main Street in Springfield, sometime around 1902-1915. Image courtesy of the Longmeadow Historical Society. 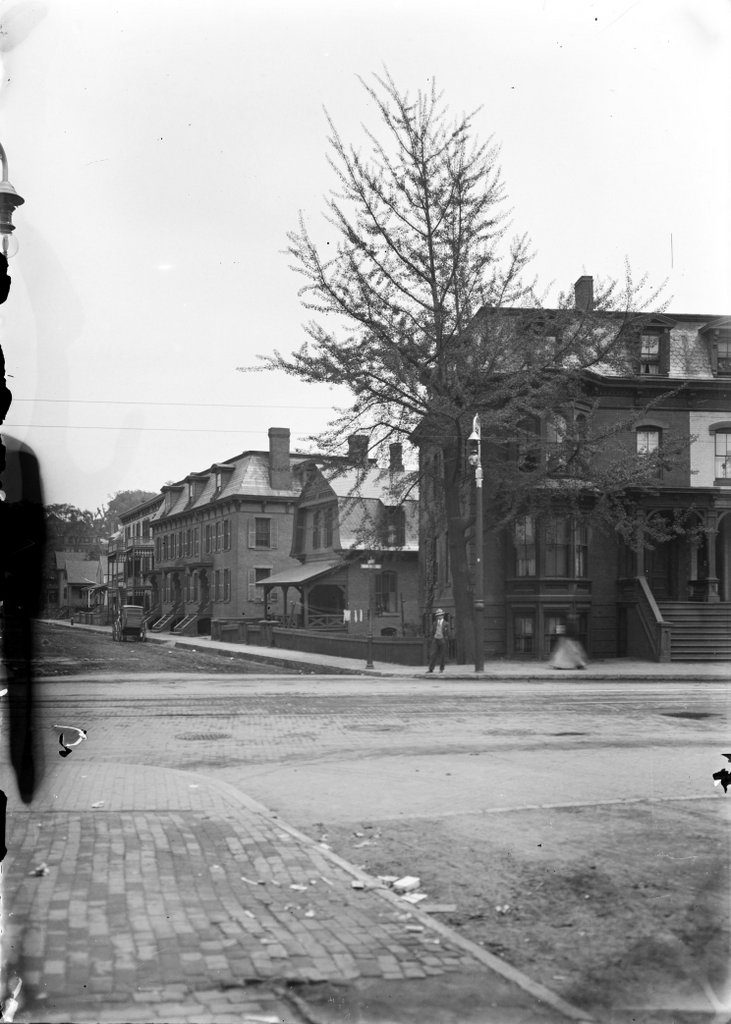 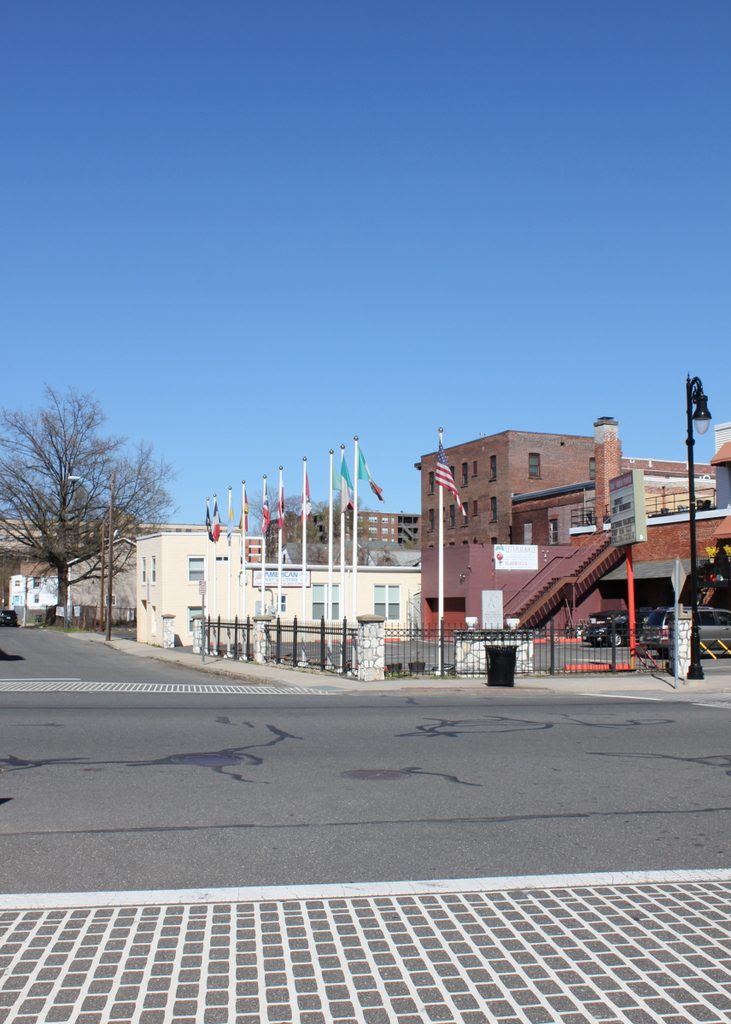 William Street, located in the South End of Springfield, was developed around the middle of the 19th century, as development of Springfield’s downtown area steadily moved southward. The area around this site had once belonged to Alexander Bliss, who operated a tannery on the site. His son, Elijah, inherited his father’s large estate after his death in 1843, and began subdividing the property. The 1851 city map shows a number of buildings here, all owned by Elijah, although the ones in the first photo were probably not built until around the 1860s or early 1870s.

The houses in the first photo were primarily rowhouses, with a larger wooden apartment block further in the distance and a few single-family homes interspersed among the larger buildings. The rowhouses feature Second Empire-style architecture, with the distinctive mansard roofs on the third floor, but their designs also incorporate elements of the earlier Italianate style, such as the curved window lintels and the decorative brackets under the eaves.

The South End has long been home to a variety of immigrant groups, many of whom were living here when the first photo was taken in the early 20th century. The 1910 census shows many different working-class residents living here in apartments and lodging houses, including French-Canadian and Irish immigrants along with native-born Americans. The house on the right side, for example, was a lodging house that was owned and operated by Abbie E. Neale, a 49-year-old widow who also owned the smaller house behind it. She rented the property to 14 lodgers, which included a mix of single people and married couples who were mostly in their 20s and 30s. They held a variety of working-class jobs, including several painters, a hotel bellman, a cotton mill spinner, and a machine shop laborer.

Around the corner on William Street, the three brick rowhouses on the left side of the photo were rented by three French-Canadian families during the 1910 census. The house closest to the camera, at 169 William Street, was rented by Ovide and Elmina Bouley, immigrants from Quebec who lived here with their infant daughter and Elmina’s father. The middle house was rented by Onesime Grise, a 65-year-old French-Canadian widow who lived here with her brother-in-law, three of her sons, her widowed daughter-in-law, and her young grandson. Furthest from the camera, the last of the three rowhouses was rented by another French-Canadian widow, 58-year-old  Alphonsie Archambeau. According to the 1910 census, she had 12 children, only one of whom was still alive. This child, 17-year-old Eva Tatro, was living here at the time, as were three lodgers who rented rooms from Alphonsie.

In the years after the first photo was taken, the South End shifted from predominantly French-Canadian to Italian, a legacy that remains in the neighborhood today, with many Italian restaurants, shops, and bakeries. However, none of the buildings from the first photo are still standing here. The brick ones in the foreground appear to have been demolished prior to the late 1930s, because they were not among the buildings photographed as part of the 1938-1939 WPA project. The wooden apartment building in the distance was still standing at the time, but it has also since been demolished, and today this side of William Street is now primarily vacant lots, with a parking lot here at the corner. 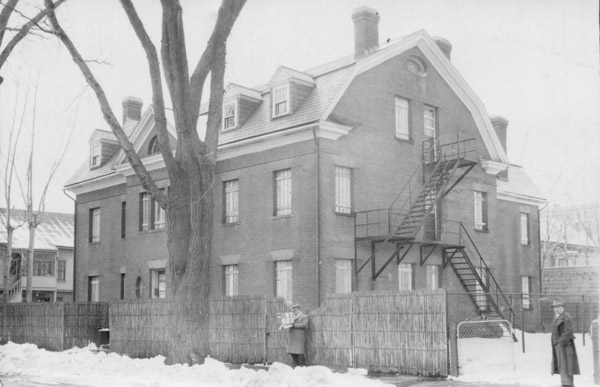 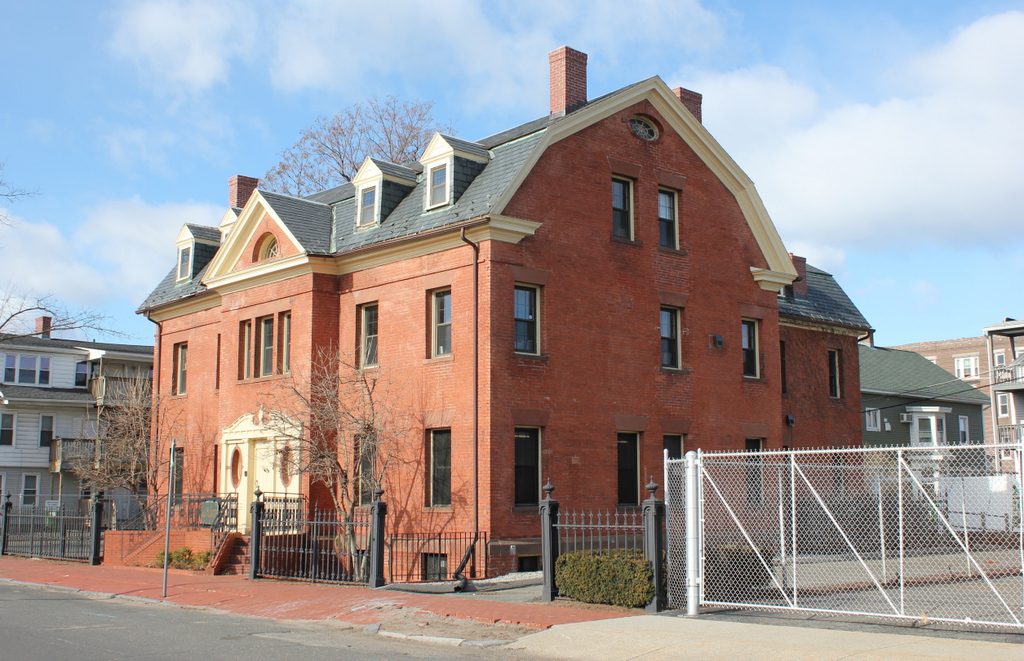