Looking east on Pelham Street, toward the corner of Spring Street in Newport, around the early 1880s. Image courtesy of the Providence Public Library. 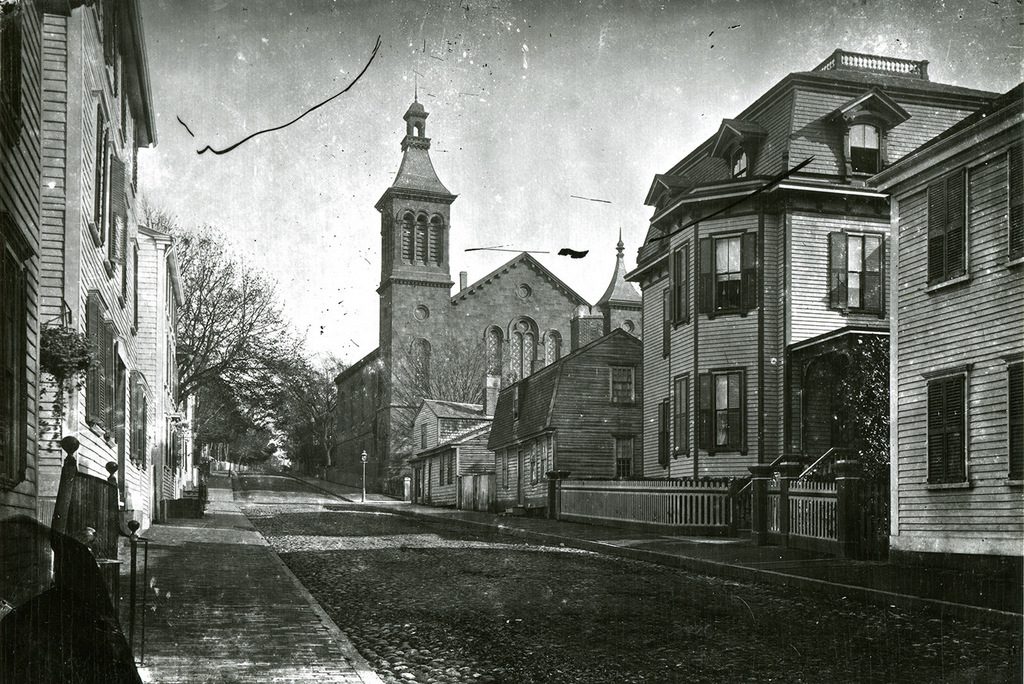 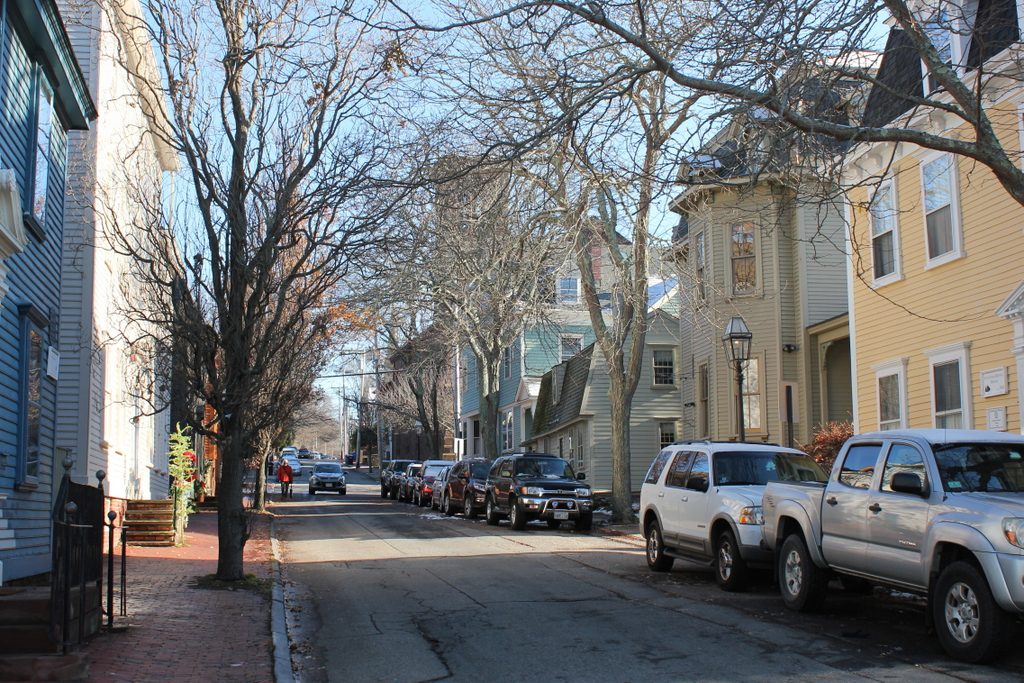 These photos show the same scene as those in an earlier post, just from the opposite view along Pelham Street. Here, a mix of 18th and 19th century homes line either side of the narrow street, with the United Congregational Church standing in the distance at the corner of Spring Street. Probably the oldest of these is the Langley-King House, which is partially visible on the extreme left of the photo. It was built around 1710, expanded around the mid-18th century, and eventually restored in the early 1970s. Next to it is the three-story John Gidley House, which was built around 1744, and further in the distance are several other homes that date to around the 18th century.

On the right side of the street, probably the newest house in the first photo is the Anthony Stewart, Jr. House. It was built around the 1860s or early 1870s, and its Victorian-era Mansard roof and bay windows stand in sharp contrast to the colonial-era buildings all around it. Its neighbor to the right, the c.1804 Jonathan Bowen House, also features a Mansard roof, although this was evidently added at some point after the first photo was taken. Further in the distance on the right is the small gambrel-roofed Lucina Langley House, which was built sometime before 1771 and still stands at 43 Pelham Street. However, its neighbor to the left, at the corner of Spring Street, was demolished sometime soon after the first photo was taken, and was replaced by the present-day William M. Austin House in 1883.

Perhaps the most historically significant building in this scene is the United Congregational Church. This Romanesque Revival-style brownstone church was completed in 1857, and was the work of noted New York architect Joseph C. Wells. At the time, the interior was largely plain, in keeping with the Puritan traditions of the Congregational Church, but this changed in 1880, when the prominent artist John La Farge was commissioned to redesign the interior. His only restriction was that he could not include illustrations of figures, or any Christian symbols, as these could be seen as violations of the second commandment’s prohibition of graven images. As a result, La Farge drew heavily upon Byzantine and even Islamic tradition, incorporating intricate geometric patterns and other abstract designs into his work. This ultimately included 20 stained glass windows, along with a number of murals on the walls and ceiling, and it was completed shortly before the first photo was taken.

Today, more than 130 years after the first photo was taken, remarkably little has changed in this scene. All of the houses are still here, except for the one on the right at the corner of Spring Street, and the church is also still standing. It is now partially hidden by trees and by the Austin House, but the only significant change is the loss of the pyramidal roofs atop the towers, which were destroyed in the 1938 hurricane and were never replaced. All of the buildings in this scene are now part of the Newport Historic District, a National Historic Landmark district that was created in 1968. However, the United Congregational Church was also individually designated as a National Historic Landmark in 2012, in recognition of La Farge’s interior design of the building.