Center Church on the New Haven Green, around 1900-1915. Image courtesy of the Library of Congress, Detroit Publishing Company Collection. 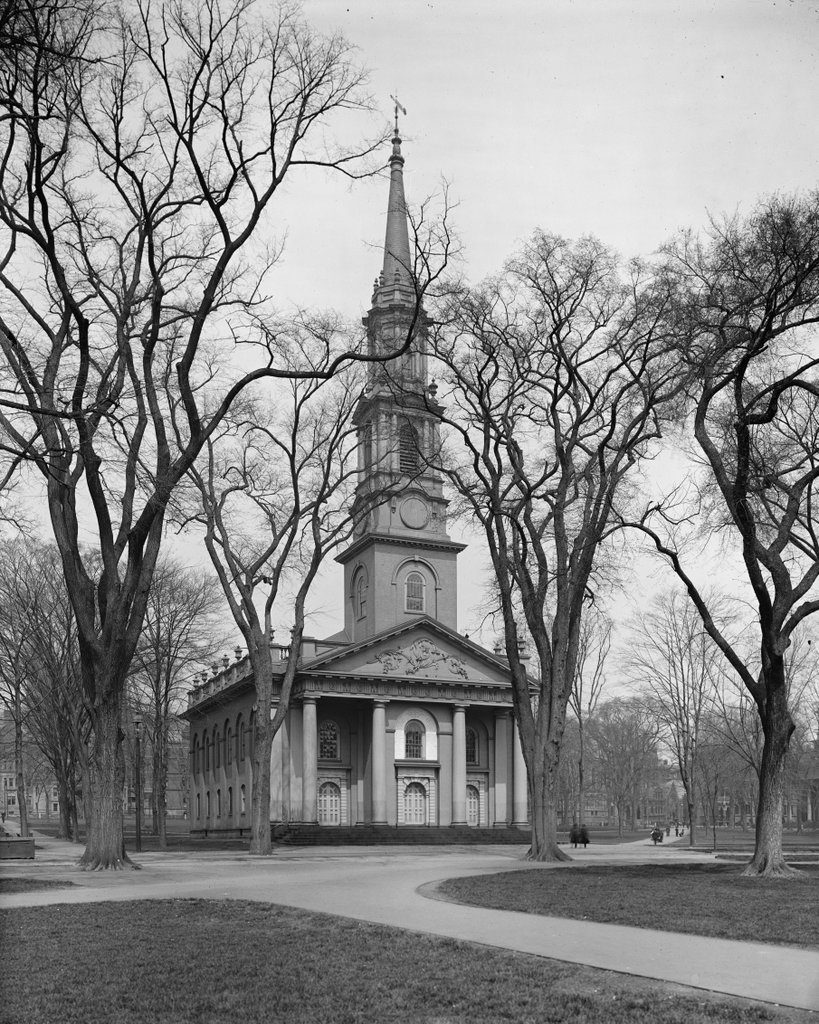 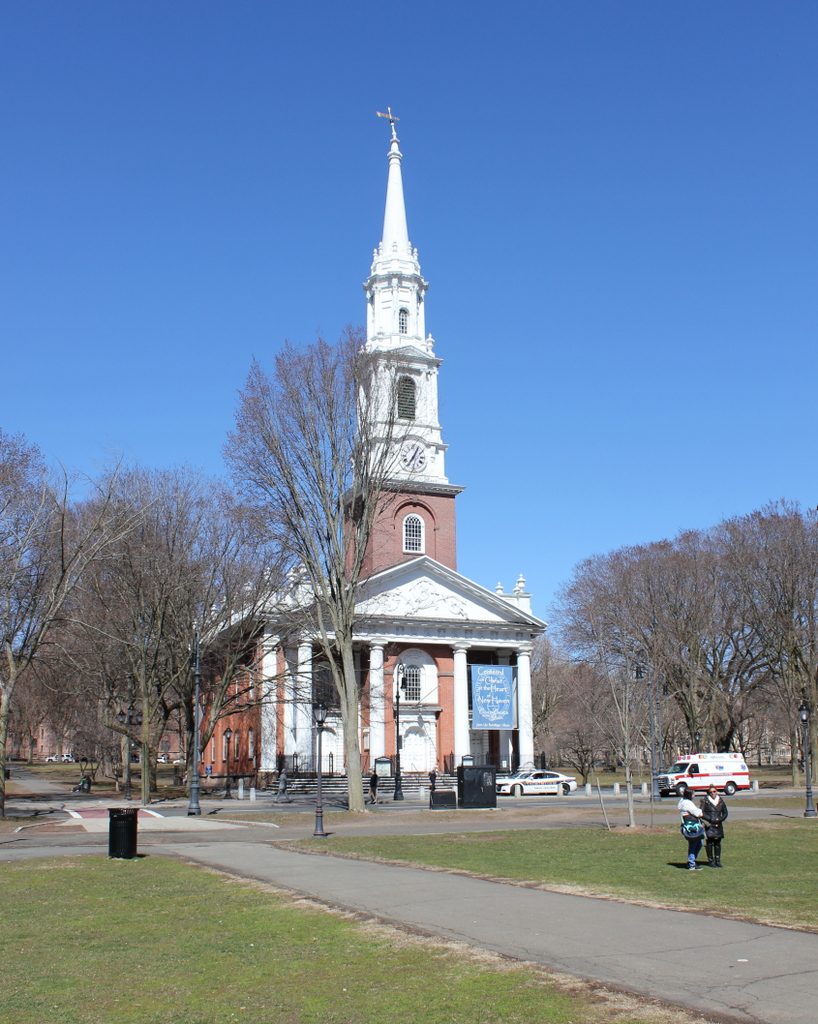 Center Church has been featured in several previous posts, which show the building along with the neighboring churches. However, this particular view provides the best look at its design, which was the work of noted architects Asher Benjamin and Ithiel Town. It was completed in 1814, but the congregation itself is considerably older, dating back to 1639, just a year after New Haven was settled. The first two meeting houses were located near the center of the eastern part of the Green, at approximately the spot where these two photos were taken. A third meeting house, built of brick, was completed in 1757, and stood a little further to the west, probably in the middle foreground of this scene.

This third meeting house remained in use until the early 19th century, when it was replaced by the current church, which stands even further to the west than its predecessors. This site was not without controversy, though, because the western part of the green had long been used as New Haven’s burial ground. An estimated 4,000 to 5,000 people had been buried here during the 17th and 18th centuries, before the opening of the Grove Street Cemetery in 1797. The burials on the Green had largely ceased by the turn of the 19th century, and around 1812 the church decided to construct its new building on a portion on the burial ground.

This action caused considerable controversy in New Haven, with many objecting to the perceived desecration of their ancestors’ graves. The book Chronicles of New Haven Green, published in 1898, provides the following description:

A public meeting was held at the County House, in March, 1813, at which a protest was adopted, signed by one hundred and seventy-eight subscribers, and resolutions passed vigorously denouncing the proposed location of the building. The construction was nevertheless commenced, but when the workmen began to excavate the trenches, a number of persons assembled with shovels and began to throw back the earth as fast as it was thrown out.

The work went on, though, and few of the graves were ultimately disturbed. Instead of removing the remains or the headstones, the church was built over a part of the existing burial ground, which became the floor of the basement. This created an unusual sort of crypt, with all of the headstones left standing in the same position that they had been in prior to the construction of the church. As it turned out, these graves would be better preserved than the ones outside of the church. In 1821, those stones would be moved to the Grove Street Cemetery, but the remains were not disinterred, leaving several thousand unmarked graves that are still located beneath the New Haven Green today.

Aside from its unconventional basement, the design of the church was typical of many New England churches of this era. It was built of brick, and featured Federal-style elements such as rounded arches over the windows, a balustrade along the roofline, and a classically-inspired columned portico at the front entrance, with modillions around the pediment and an ornate carving in the middle of it. Asher Benjamin, who at this point was a well-established architect, provided the original plans for the church, which was evidently based on St. Martin-in-the-Fields in London. However, the design was modified by his former protege Ithiel Town, who was at the beginning of a long and successful career as an architect.

The completed church was dedicated on December 27, 1814, with a ceremony that included a closing prayer by Timothy Dwight, the eminent theologian and author who served as president of Yale from 1795 until his death in 1817. At the time, the pastor of the church was Nathaniel W. Taylor, a young Yale graduate who had studied under Dwight. Like his mentor, he went on to become a prominent theologian. He served as pastor of the church until 1822, when he left to accept a position as a professor at Yale. He was also one of the founders of what later became the Yale Divinity School, and he continued to teach didactic theology at Yale until his death in 1858.

Reverend Taylor’s successor, Leonard Bacon, was installed as pastor in 1825, at the age 23, and he served for more than 50 years until his death in 1881, although he retired from active ministry in 1866. He was also a Yale graduate, of the class of 1820, and in 1823 he had graduated from Andover Theological Seminary. Like his predecessor, he would go on to become a prominent clergyman, but during this time he also achieved fame as an author and editor. He was the editor of the Christian Spectator, which was a literary journal that later became the Yale Review, and he was also a founder and the longtime editor of The Independent. In addition, he published several books, including Slavery Discussed in Occasional Essays from 1833 to 1846. This abolitionist book helped to influence, among others, Abraham Lincoln, whose famous statement, “If slavery is not wrong, nothing is wrong,” is actually a paraphrase of Bacon’s assertion in the book that “if those laws of the Southern States, by virtue of which slavery exists there, and is what it is, are not wrong — nothing is wrong.”

The first photo was taken only a few decades after Reverend Bacon’s death, and by this point the church building was already nearly a century old. Very little changed on the exterior during this time, and although another century has passed since this photo was taken, the church has remained well-preserved today. Along with the two other nearby historic churches, it is now a contributing property in the New Haven Green Historic District, which was designated as a National Historic Landmark in 1970. Underneath the church, the crypt has been unaltered since the building was completed, and 137 headstones still mark the graves. It is the only visible remnant of the large colonial cemetery on the Green, and it is seasonally open to the public for tours.