The United Church, at the corner of Temple and Elm Streets in New Haven, around 1900-1915. Image courtesy of the Library of Congress, Detroit Publishing Company Collection. 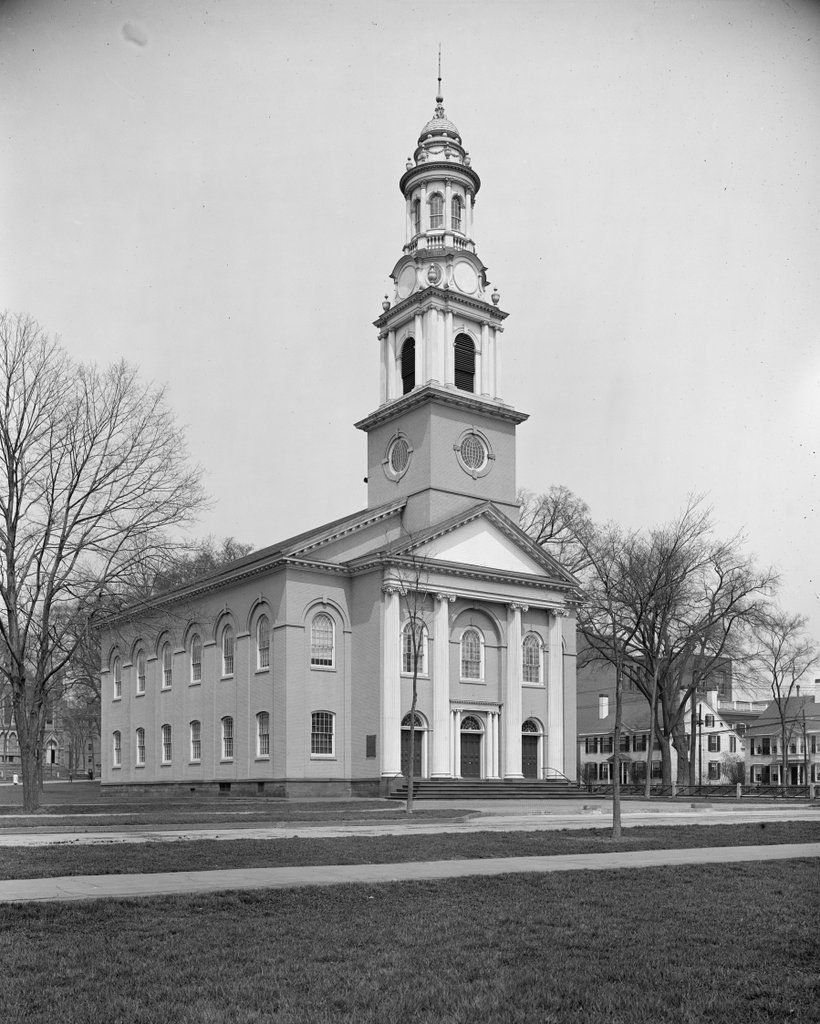 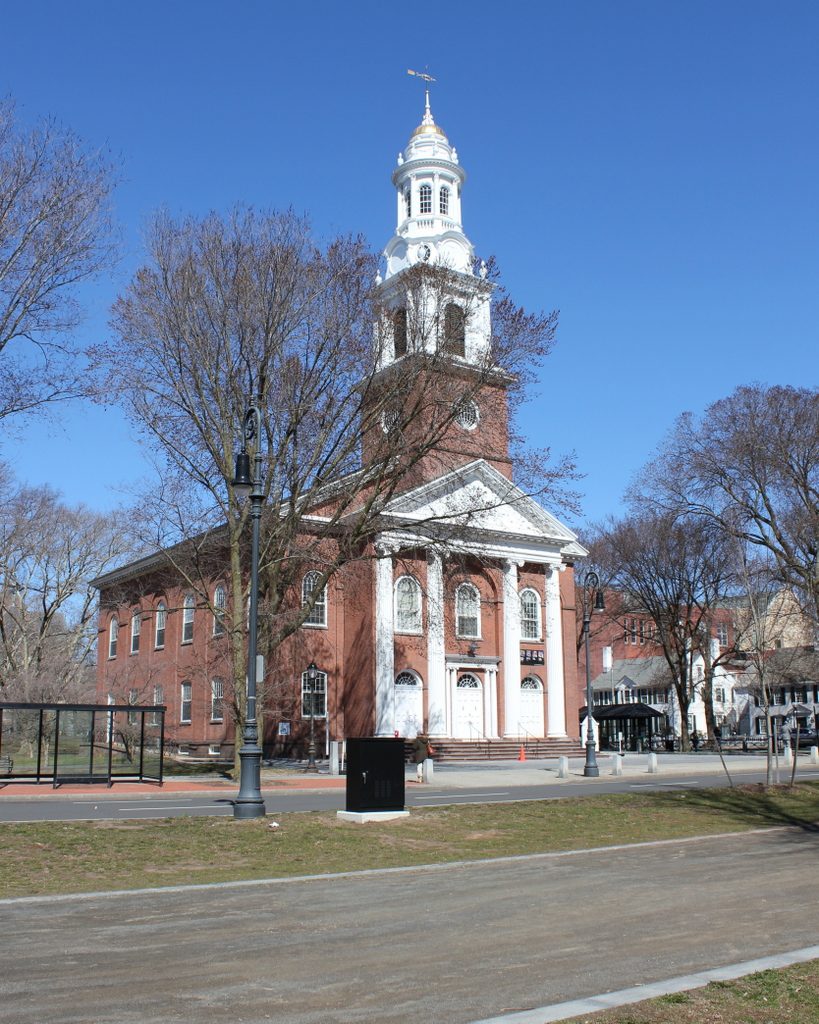 As discussed in a previous post, the United Church – also known as the North Church – was completed in 1815. It was the second in a row of three churches that were built along Temple Street on the New Haven Green, and it featured Federal-style architecture that was very similar to the neighboring Center Church, which had been built a year earlier. However, unlike Center Church, which had been designed by two of the most influential early 19th century architects, United Church was evidently designed by Ebenezer Johnson, Jr., a local shoemaker who was a member of the congregation. Noted architect David Hoadley is generally credited with overseeing the construction, though, so he may have had a hand in the final design as well.

The United Church itself predates the construction of this church by nearly 75 years, with the origins of the congregation dating back to 1742. At the time, New England was in the midst of the Great Awakening, causing a rift between the “New Lights,” who were influenced by the preaching of men such as George Whitefield and Jonathan Edwards, and the “Old Lights,” who were wary of the ongoing revival. The New Lights of New Haven ultimately separated from the First Church in 1742, forming the White Haven Church, with a meeting house that was located a block away from here, at southeast corner of Church and Elm Streets.

Probably the most prominent early pastor of the church was Jonathan Edwards the Younger, who was the son of Jonathan Edwards. He was installed in 1769, but this decision proved controversial, and many members left and formed a new church, known as the Fair Haven Church, and constructed a meeting house here at the site of the current church. These two congregations remained separate throughout Reverend Edwards’s tenure, but he left in 1795, and the churches were reunited the following year as the Church of Christ in the United Societies of White Haven and Fair Haven. This rather unwieldy name was eventually simplified, and was variously to as either the United Church or the North Church, given its location at the northern end of the Green.

Following the reunification, the congregation worshiped in both meeting houses, alternating on a monthly basis. This arrangement continued for some time, but by the early 1810s the church had seen significant growth, and the old buildings were in poor condition. As a result, in 1813 construction began on a new brick church, which was built on the site of the former Fair Haven building. Twenty church members were involved in the actual construction work, and their payment was in the form of the two old buildings,, along with the former property of the White Haven Church. The new church was dedicated in December 1815, although the finishing touches would not be completed for another two years.

During the Antebellum period, this church and its members contributed to the growing Abolitionist movement in New England. Perhaps most significantly, one of its members was Roger Sherman Baldwin, an attorney who represented the African defendants in the Amistad case. Baldwin was successful in the trial, which was held across the Green from here on the present-day site of City Hall, but the outcome was then appealed to the Supreme Court. There, Baldwin again spoke in favor of the kidnapped Africans, as did former president John Quincy Adams, and the Supreme Court affirmed the lower court decision to free the men. Baldwin would subsequently go on to have a successful political career, serving as governor of Connecticut from 1844 to 1846, and as a U. S. senator from 1847 to 1851.

Aside from its connection to the landmark Amistad case, the North Church was also involved in the controversy over whether Kansas should be admitted to the Union as a free state or slave state. Since this issue was to be decided by a vote among its residents, this caused an influx of both pro-slavery and anti-slavery settlers, with each side hoping to tip the balance in their favor. This inevitably resulted in violence between the two sides, and on March 20, 1856 the prominent abolitionist and pastor Henry Ward Beecher spoke here at the church, in support of a group of New Haven residents who were moving to Kansas. As the New York Times recounted several days later,

The object of the meeting was to raise money for the purpose of providing the colonizing party with proper weapons of self-defence against the attacks of the Border Ruffians, and also to give them something with “lock, stock and barrel,” to point at the wolves of the prairie who may encroach upon their camps.

The price of admission was fixed at twenty-five cents, but, notwithstanding the equivocal politeness of inviting a subscription party out of an evening, on such conditions, the Church was filled – floor and galleries – with an audience of the most prominent citizens of New-Haven, including a large number of clergymen of various denominations, and a full quorum of Professors from the Faculty of Yale College.

As the keynote speaker of the event, Reverend Beecher spoke about slavery, its effect on the country, and the current situation in Kansas. Following his speech, the audience sang a hymn, “Song of the Kansas Emigrant,” and then Yale professor Benjamin Silliman came forward and asked the people to purchase Sharps rifles, at a cost of $25 each, for the departing settlers to bring with them. Samuel W. S. Dutton, the pastor of the church, was among the first to pledge money for a rifle, standing and declaring that “One of the deacons of this church, Mr. Harvey Hall, is going out with the Company, and I, as his pastor, desire to present to him a Bible and a Sharpe’s rifle.” This was met with great applause, and at one point Reverend Beecher pledged that his church would give 25 rifles, if the assembly could match the contribution. They eventually reached this number, with some contributing multiple rifles, and finished the meeting with a total of 27 rifle pledges from the assembly. This, combined with the admission fee, resulted in a collection of about a thousand dollars for the Kansas settlers, or about $28,000 in today’s dollars.

The church went through another merger in 1884, when it joined with the Third Congregational Church. The combined congregation continued to worship here in this building, which had seen few exterior changes by the time the first photo was taken in the early 1900s. Two other historic buildings are also visible in the photo, which predate the church. On the far right side of the photo, at 149 Elm Street, is the John Pierpont House, which was built in 1767, and just to the left of it is the Jonathan Mix House, built in 1799. Today, remarkably little has changed in more than a century since the photo was taken. Both of these houses are still standing, with the Pierpont House now serving as the Yale Visitor Center. The church has also remained well-preserved during this time, and it is now a contributing property in the New Haven Historic District, which was designated as a National Historic Landmark in 1970.