The Colonial Inn at Monument Square in Concord, around 1908. Image courtesy of the Library of Congress, Detroit Publishing Company Collection. 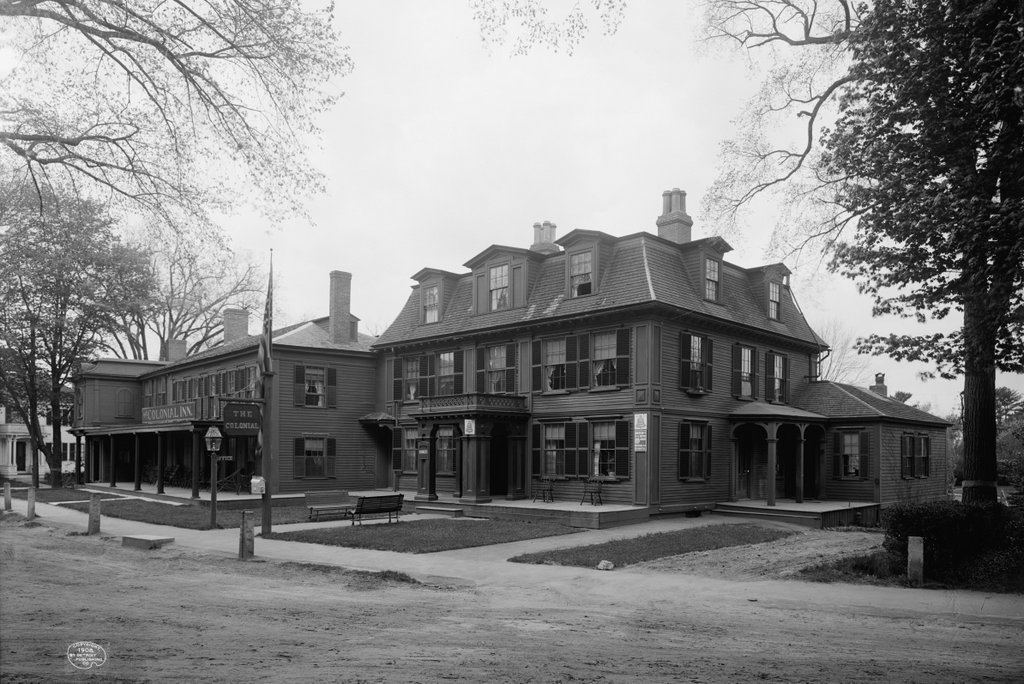 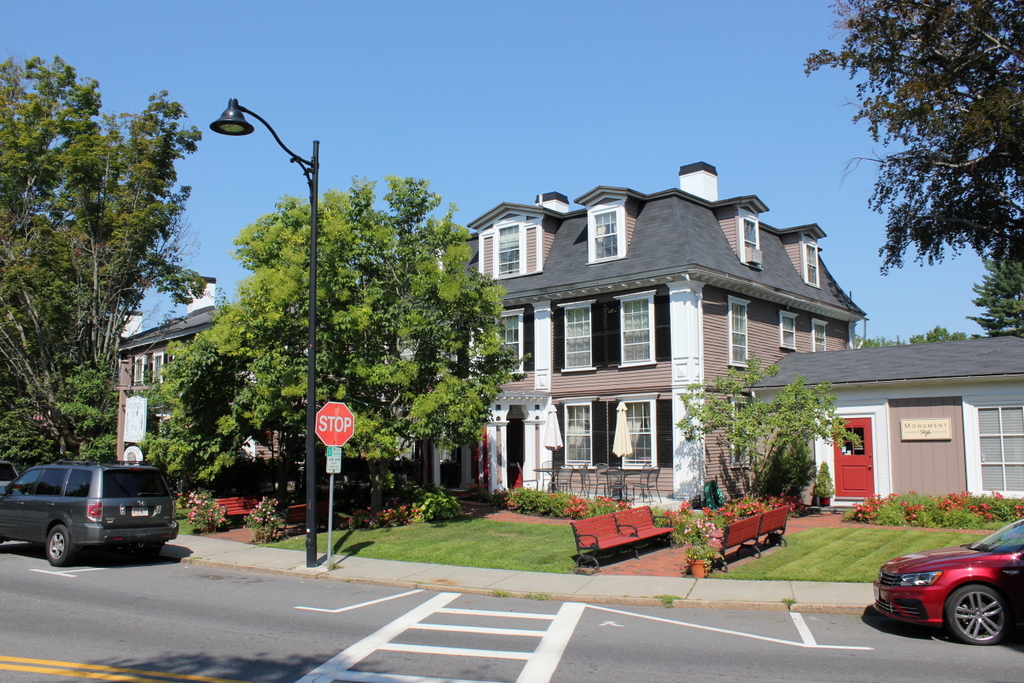 The Colonial Inn has long been a fixture here at the northern end of Monument Square in downtown Concord. It is actually comprised of three different buildings, constructed over the course of more than a century, that have been united into a single structure.  The property became the Colonial Inn in 1897, shortly before the first photo was taken, and it has remained in operation for nearly 125 years, with few significant changes to the exterior of the building from this view.

The oldest portion of the building is the right side, shown here in the foreground of these two photos. It dates back to around 1716, although it has since been heavily altered, including the addition of a mansard roof in the 1860s. It was originally owned by James Minot Jr., a prominent Concord resident who served in the colonial legislature and on the Governor’s Council. He was also an officer in the colonial militia, eventually rising to the rank of colonel during the French and Indian War. He died in 1759, and his teenage son Ephraim subsequently inherited the house. He owned it for about five years before selling it to his cousin, Dr. Timothy Minot.

During Dr. Minot’s ownership, he constructed what is now the central portion of the Colonial Inn, located just to the left of the original house. At the time, it was only one story in height, and the second story would not be added until 1800. Soon after its completion, this wing of the house was one of the places where the colonists stored munitions in advance of the Battle of Concord on April 19, 1775. The British evidently did not uncover this cache, and after the battle the house became a temporary hospital, with Dr. Minot caring for the wounded soldiers.

In 1780, Dr. Minot began renting the wing to John White, a Revolutionary War veteran who opened a general store here. In 1789, he sold this section of the property to White, and in that same year he sold the house on the right side to his son-in-law, Ammi White, a cabinetmaker who does not appear to have been directly related to John White. Ammi was also involved in the Revolutionary War, although he had a more controversial role. During the Battle of Concord he used a hatchet to kill a wounded British soldier, an act that has been various interpreted as either a barbaric scalping or a mercy killing.

Ammi White owned the house on the right for about a decade, before selling it to John Thoreau, the grandfather of famed Transcendentalist author Henry David Thoreau. John died just two years later, but the house remained in the Thoreau family for many years. His daughters ran a boarding house here, and for a time John Thoreau Jr.—Henry’s father—worked in the White store next door. The future author also lived here for a few years as a teenager, from 1835 to 1837.

In the meantime, John White expanded his property sometime between 1812 and 1820, with the construction of a house on the left side of his store. This became his residence, but in 1821 he sold both buildings to Daniel Shattuck, who continued to run the store here. However, Shattuck was also involved a number of other business ventures, including establishing the Middlesex Mutual Fire Insurance Company, the Concord Bank, and the Middlesex Institution for Savings. In addition, he served in both houses of the state legislature, and he was a colonel in the state militia.

Shattuck eventually acquired the house on the right side from the Thoreau family in 1839, marking the first time that all three buildings were simultaneously under the same ownership. By mid-century, Shattuck had retired from the dry goods business, and the former store in the central section was converted to residential use. He continued to live in the house on the left side until his death in 1867, but a few years earlier he gave the entire property to his daughter, Frances Surette. Her husband, Louis Surette, was a dry goods merchant, and they also operated a boarding house here, which they named the Thoreau House in an apparent attempt to capitalize on the name recognition of the former owners. During this time, their son Thomas Whitney Surette grew up here, and he later went on to become a noted musician and music teacher.

In 1889, the central and right-hand buildings were sold to John Maynard Keyes, who opened a hotel here. Then, in 1897 he acquired the house on the left and combined all three into a single building, which he named the Colonial Inn. The first photo, taken about a decade later, shows the eclectic mix of architectural styles that comprise the inn, with the original 1716 house on the right, the 1775 store to the left of it, and the early 19th century house on the far left, at the corner of Lowell Road.

The Colonial Inn has been here ever since, and over the years it has had a number of notable guests, including J.P. Morgan, Franklin D. Roosevelt, Sandra Day O’Connor, John Wayne, and Bruce Springsteen. Throughout this time, the inn has undergone further changes, including the addition of a large, modern wing on the rear of the building in 1960. From this view, though, the building has remained essentially unchanged since the first photo was taken, aside from the small addition on the right, and it stands as an important landmark in downtown Concord.