The Old Manse on Monument Street in Concord, around 1890-1901. Image courtesy of the Library of Congress, Detroit Publishing Company Collection. 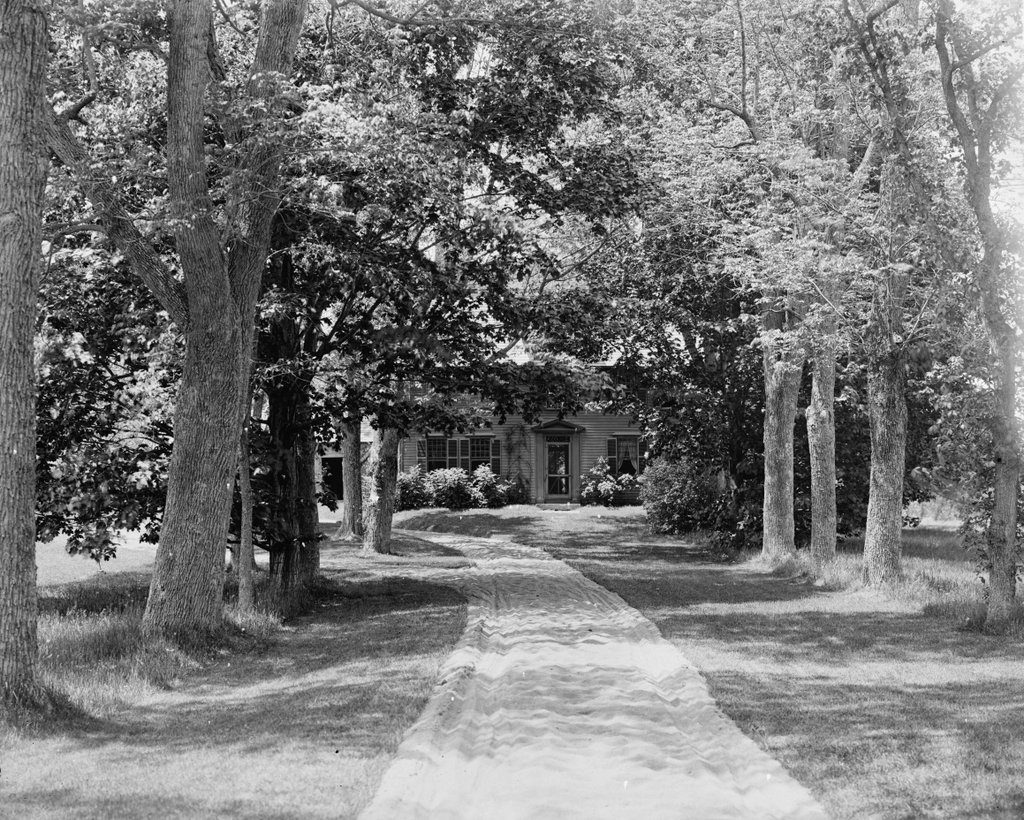 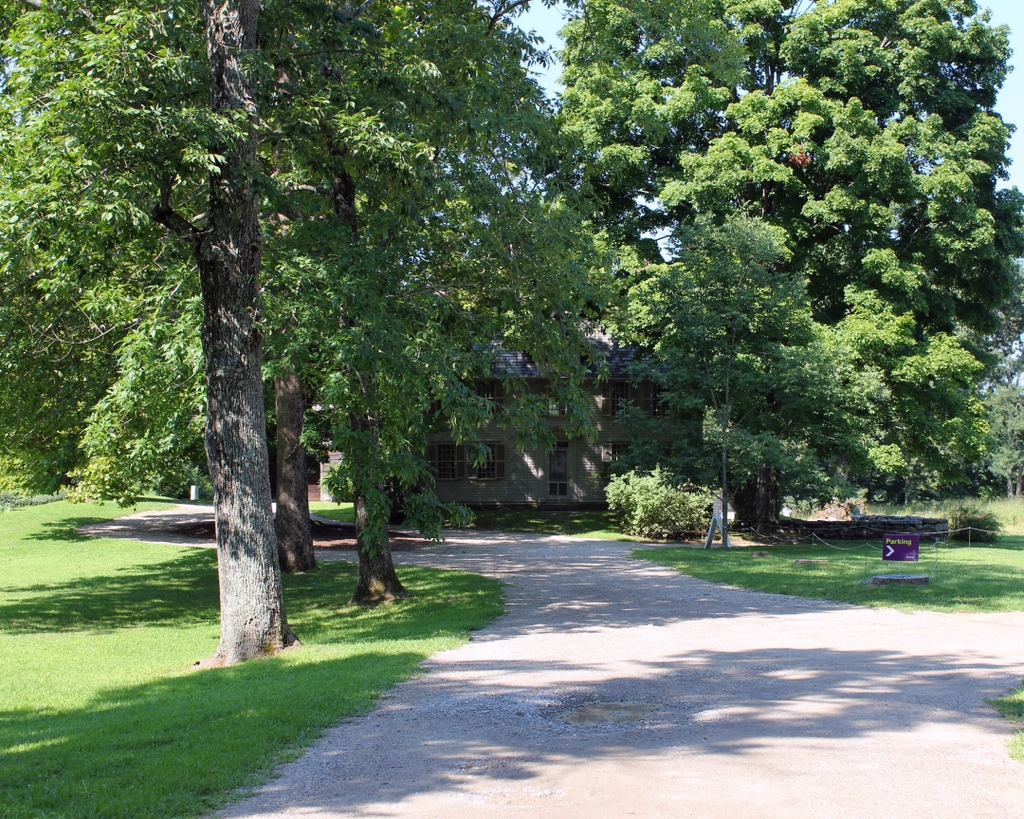 The Old Manse is one of the most important historic buildings in Concord, with connections to the American Revolution and to two of the most important authors in 19th century America. It dates back to 1770, when it was constructed as the manse, or parsonage, for the First Parish Church. The church itself was located in downtown Concord, while the Old Manse is about three-quarters of a mile north of there, along the banks of the Concord River and adjacent to the Old North Bridge.

The first pastor to live here in this house was William Emerson, the grandfather of future Transcendentalist author Ralph Waldo Emerson. He was about 27 years old at the time, and he had served in the church since 1766. It was during his pastorate that, in October 1774, the Massachusetts Provincial Congress met in his church after the British authorities had formally disbanded the colonial legislature. The delegates, who were presided over by John Hancock, continued to meet anyway, and during their time in Concord Emerson served as the chaplain of the congress.

Within six months, Concord was again at the center of revolutionary activity when, on April 19, 1775, British forces left Boston to search for hidden caches of munitions in Concord. After a brief skirmish in nearby Lexington, which marked the beginning of the American Revolution, the British arrived in Concord, where they began searching the town. They ended up at the Old North Bridge, which was quite literally in Emerson’s backyard, just beyond the trees on the far right side of this scene, about 150 yards from the house. It was here that the redcoats engaged with the local militia forces, and where the famous “Shot heard round the world”—as Emerson’s famous grandson later termed it—was fired.

Reverend Emerson and his family witnessed the battle from the house, although he was not directly involved in the fighting. However, he subsequently joined the Continental Army as a chaplain, and he is generally considered to have been the army’s first such chaplain. He traveled north to Fort Ticonderoga in upstate New York during the summer of 1776, but he subsequently fell ill and died in Rutland, Vermont on October 20, at the age of 33.

His death left his widow Phebe with five young children to care for, including a newborn daughter. She subsequently remarried in 1780 to Ezra Ripley, who had succeeded her late husband as pastor of the church. This was not an uncommon practice for young pastors to marry the widows of their predecessors, although there was a bit of an age difference here, as Ezra was ten years younger than Phebe. The couple had three more children together, and they continued to live here at the Old Manse for the rest of their lives. Phebe died in 1825 at the age of 83, and Ezra continued to serve as pastor of the church until his death in 1841 at the age of 90, for a total of 63 years in the pulpit.

In the meantime, Phebe’s eldest son, William Jr., followed his father into the ministry, graduating from Harvard in 1789 and eventually becoming pastor of the First Church in Boston. Like his father, though, he also had a short life, dying in 1811 at the age of 42. His son, Ralph Waldo Emerson, was seven years old at the time, coincidentally the same age that William had been when his father died in 1776. Ralph would continue the family tradition by attending Harvard and becoming a pastor, serving in Boston’s Second Church starting in 1829. However, his young wife Ellen died two years later from tuberculosis, causing a crisis in faith that led him to resign from his position in 1832.

In 1834, when he was about 31 years old, Ralph Waldo Emerson moved into the Old Manse, where he lived for about a year with his elderly step-grandfather. Although he was not yet a published author, Emerson did some writing while he lived here, including working on his famous essay “Nature,” which was published in 1836. During this time, he also became engaged to his second wife, Lidian Jackson. They married in 1835, and they subsequently moved into their own house, which still stands at 18 Cambridge Turnpike in Concord.

After Ezra Ripley died in 1841, his son Samuel inherited the property. He was also a pastor, serving in Waltham, Massachusetts, but starting in 1842 he rented this house to newlyweds Nathaniel and Sophia Hawthorne. At the time, Nathaniel Hawthorne was about 38 years old, and he had enjoyed only moderate success as a writer. However, during his time here in Concord he continued to write, and in 1846 he published Mosses from an Old Manse, a collection of short stories that were, for the most part, written here in the house. The title of the book also provided the name for the house, which continues to be known as the Old Manse today.

Aside from writing a number of short stories here, Hawthorne also took inspiration from a tragedy that occurred in 1845, when 19-year-old Martha Hunt drowned herself in the Concord River near the house. He was part of the search party that recovered her body, and he later incorporated the incident into his 1852 novel The Blithedale Romance. In the book, one of the main characters, Zenobia, meets an identical fate, and Hawthorne provides a lengthy description of the search and the discovery of her body, which is described as “the marble image of a death-agony.”

In the three years that the Hawthornes lived in the Old Manse, they had several notable visitors, including future president Franklin Pierce, who came here in the spring of 1845. He and Hawthorne had been classmates at Bowdoin College, and they would remain lifelong friends. Several years later, in 1852, Hawthorne would publish a campaign biography of Pierce, using both his name recognition and literary talents to promote Pierce, who had earned the Democratic nomination for president. Pierce ended up winning the election, perhaps in part because of Hawthorne’s efforts, but his presidency ultimately failed to live up to the abilities that his friend had described in the biography.

In 1845, Samuel Ripley was looking to return to this house and live here, so by the end of the year the Hawthornes had relocated to Salem. They subsequently lived in Lenox before returning to Concord in 1852, purchasing The Wayside on Lexington Road. In the meantime, Samuel Ripley resided here at the Old Manse for only a few years before his death in 1847. However, his widow Sarah continued to live here for another 20 years. She was a noted scholar who, in the days before widespread higher education for women, had been almost entirely self-taught. She was an expert in a wide range of subjects, and over the years she tutored a number of college students, including a young Ralph Waldo Emerson.

Sarah Ripley died in 1867, but the house remained in her family for several more generations. Her daughter Sophia Thayer inherited the property, and after her death in 1914 it went to her daughter, Sarah Ames. During the early 20th century, the house was used primarily as a summer residence, and Sarah Ames owned it until her death in 1939. Her husband, architect John Worthington Ames, then sold the property to the Trustees of Reservations, a nonprofit organization that focuses on historic preservation and land conservation.

The first photo was taken sometime around the 1890s, during Sophia Thayer’s ownership. Very little has changed in more than 120 years since then, and in both photos the front view of the house is largely obscured by the trees on either side of the long driveway. Today, the Old Manse continues to be owned by the Trustees of Reservations, and it is open to the public for guided tours. Much of the surrounding area, including the battlefield site at the Old North Bridge, has also been preserved as part of the Minute Man National Historical Park, which was established in 1959 and is administered by the National Park Service.