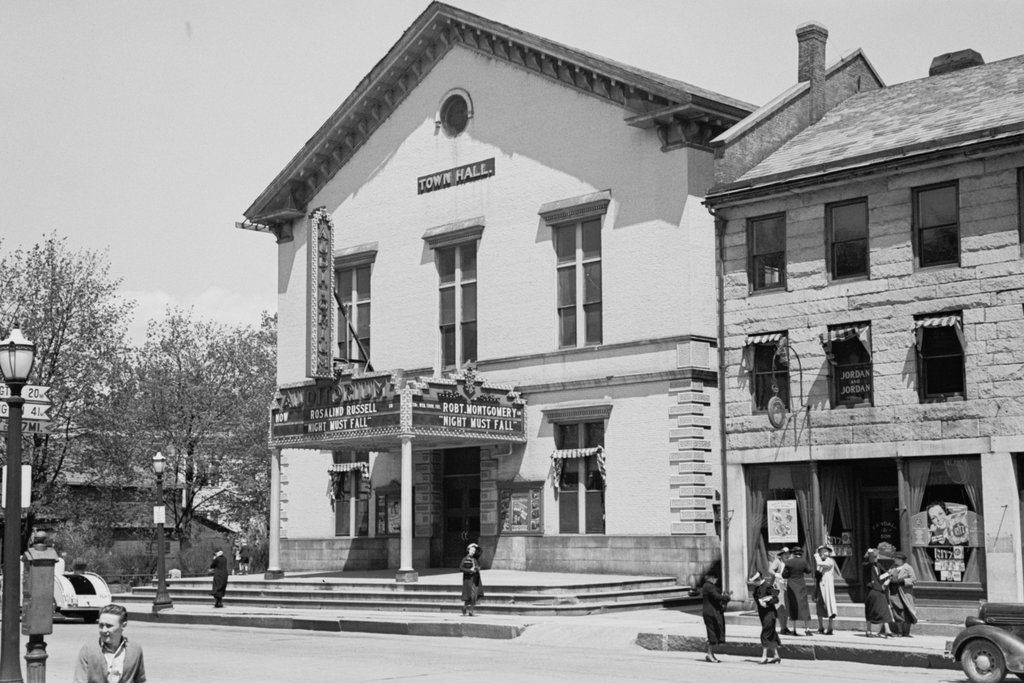 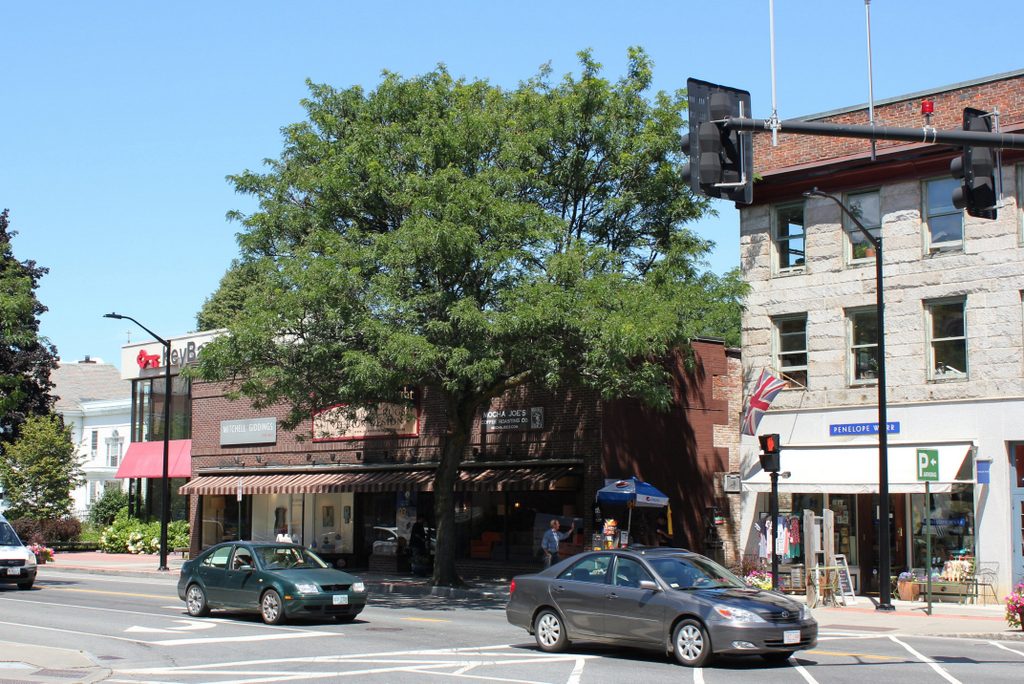 Looking north on Main Street from the corner of High Street in Brattleboro, in May 1937. Photo taken by Arthur Rothstein, courtesy of the Library of Congress, FSA/OWI Collection. 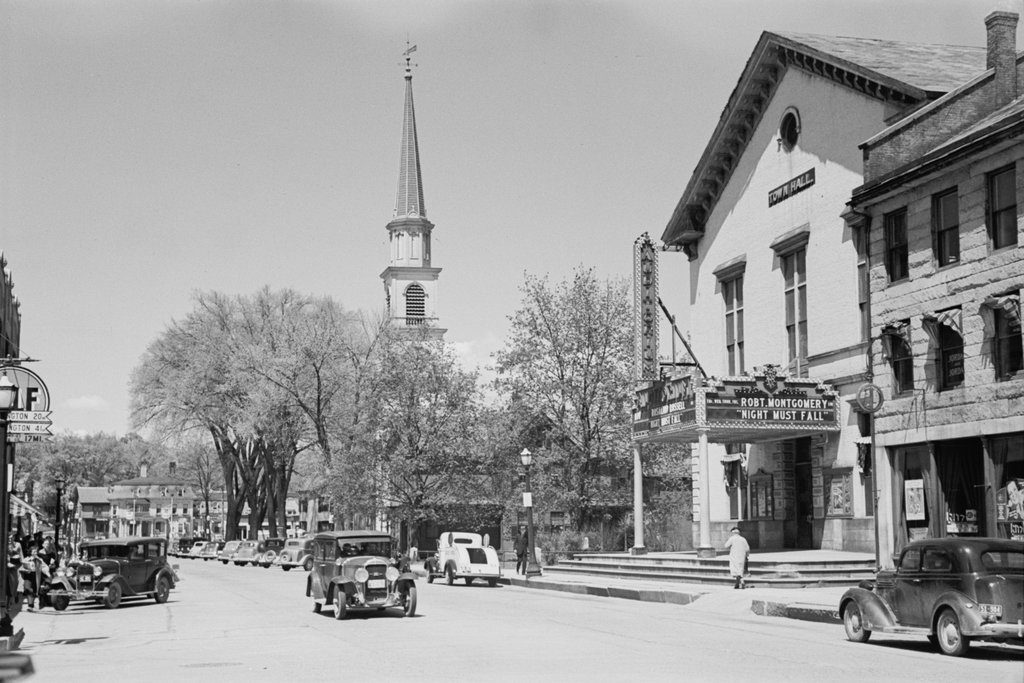 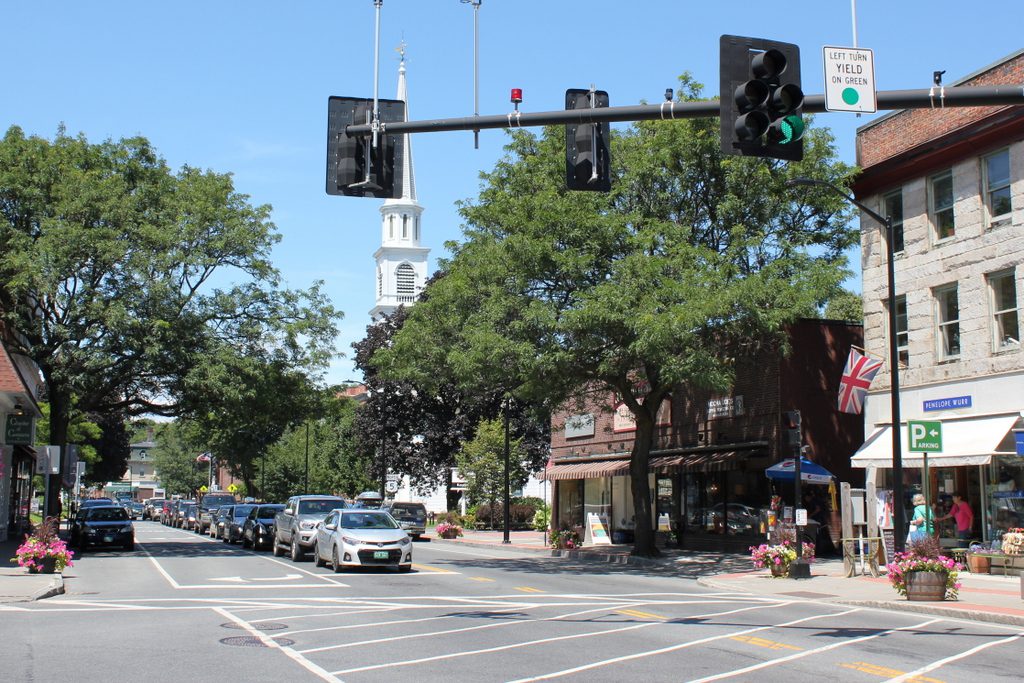 The first photo was taken in May 1937 by Arthur Rothstein, a prominent photojournalist who worked for the Farm Security Administration during the 1930s. Like the other photographers of this New Deal-era agency, Rothstein traveled around the country, documenting rural life during the Great Depression. In 1936 he visited Oklahoma, where he took one of the most iconic images of the Dust Bowl, and the following year he was in Vermont, where his images included this scene on Main Street in the downtown Brattleboro. The photo shows rows of cars parked along the street, with a mix of houses, businesses, and public buildings on the east side of the street.

Probably the oldest building in this scene is the Centre Congregational Church, with its prominent steeple in the middle of both photos. The church was originally built in 1816, and was located a little north of here on the town common. However, in 1842 the building was dismantled and reconstructed here on this site, with a design similar to the old building. The new church was dedicated in 1843, and included a steeple and a columned portico at the front of the building. This steeple was destroyed in high winds in 1864, though, and it was rebuilt with a new Italianate-style design that omitted the columns at the front entrance. In 1929, the steeple was damaged in a fire, but was repaired and has not seen any other significant changes since the first photo was taken.

The other notable building in the first photo is the town hall, which is on the right side of the scene. Built in 1855, this building saw a variety of uses, including as town offices, post office, library, and the police department, and it also housed commercial tenants over the years. In 1895, the building was renovated, and an 875-seat opera house was added to it. By the time the first photo was taken, the opera house had the less-glamorous name of Auditorium, and was used primarily as a movie theater, with the marquee advertising Night Must Fall, starring Robert Montgomery. However, the auditorium fell into decline as newer theaters opened on Main Street in the late 1930s, and in 1951 the town offices moved just up Main Street to the old high school, leaving this building vacant. It was mostly demolished two years later, and a W. T. Grant department store was built on the site. However, portions of the exterior walls of the old town hall were left standing, and were incorporated into the new building.

More than 80 years after the first photo was taken, this scene has not significantly changed aside from the loss of the old town hall. The W. T. Grant building that replaced it is still there, although the old department store has long since given way to new retail tenants. The church is also still there, as is the three-story granite building on the far right, which was built around 1850 and was later converted into the Paramount Theatre soon after the first photo was taken. Today, these 19th century buildings are now part of the Brattleboro Downtown Historic District, which was added to the National Register of Historic Places in 1983.