Another view of the Rose Cottage, this time taken at its new location on Mulberry Street, around 1938-1939. Image courtesy of the Springfield Preservation Trust. 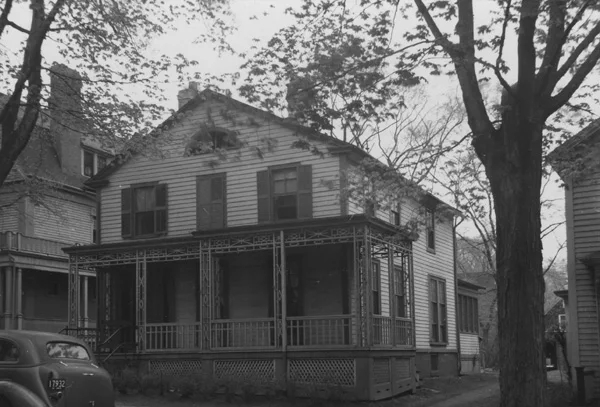 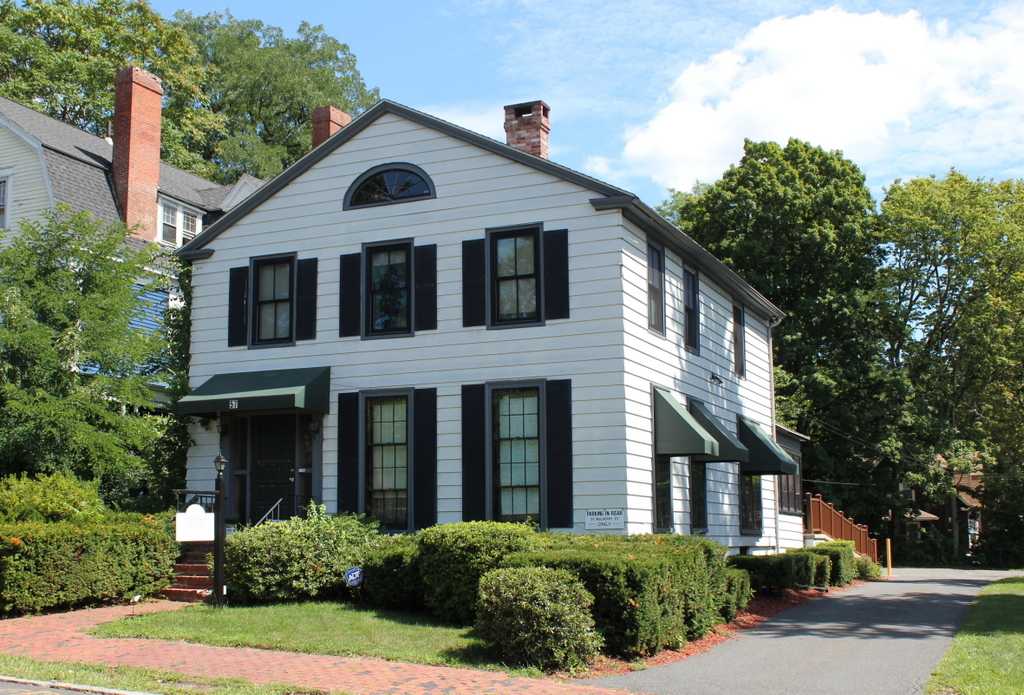 This house, once known as Rose Cottage, is the same as the one in the previous post, but in a different location. As mentioned in the other post, it was originally built in 1824 on Chestnut Street as the home of Elisha and Eunice Edwards. After Eunice’s death in 1875, Edwards Street was developed through the property, but the house was preserved. It was moved to 57 Mulberry Street, and her daughter, Charlotte Edwards Warner, lived here until her death in 1916.

Warner was an author who wrote A Chronicle of Ancient Chestnut Street, a short book that gives historical accounts of the old houses on Chestnut Street, including Rose Cottage. She also wrote a poem, “The Old House,” which was published in 1907 in The Poets and Poetry of Springfield in Massachusetts. Although the house is not specifically identified, it seems unmistakable that Warner was referring to the home where she and her nine siblings were born and raised:

Still the sun shines
Shines luminously bright
On the white wall.
Deserted is the home:
Strangers will hither come,
Still will the sun give light
Alike to all.

Many thoughts rise
As my memory glides
Over the past;
Bringing the dead to life,
Now freed from mortal strife;
Passed o’er the surging tides
Peaceful at last.

Children I see,
Lovely they were to me
As the May morn;
But soon the angel Death
Received their parting breath;
They to Eternity
Onward were borne

Matron and maid
Passed through the valley’s shade
In the deep sea:
Strong was the maiden’s heart
Loving the better part;
In God her hope was staid
So trustingly.

Still the sun shines
Through the wide open blinds
On the white wall:
No shadow passes near,
No friendly voice I hear,
No one the beggar finds
Answers his call.

On each fair morn
I raise my eyes to see
The vision bright
And, as the glad sunshine
Enters this heart of mine,
Spirits there seem to me
Bathed in its light.

By the time the first photo was taken, the house was no longer in the Edwards family. However, just as the home had likely inspired Warner’s poem, Mulberry Street also found itself memorialized in literature. In 1937, a year or two before the first photo was taken, Springfield native Theodor Geisel published his first children’s book, And to Think That I Saw It on Mulberry Street, written under his pen name of Dr. Seuss.

Today, the old Rose Cottage home is still standing on Mulberry Street. With simple Greek Revival architecture, it is very different from the more elaborate homes on the street, which date to the late 19th and early 20th centuries. Its significance, though, seems to have gone mostly unnoticed. Aside from a single article in the Springfield Republican a century ago, I have found little about this house. Having been built in 1824, it is among the oldest buildings in the downtown area, and it is the last of the original Chestnut Street homes still standing in the city, yet information about the house is fairly scarce. However, its exterior nonetheless remains well preserved. Aside from the loss of the porch, very little has changed from the 1930s view, and as the photo in the previous post shows, it looks essentially the same as it did when it stood on Chestnut Street.