Facing west along the north side of Washington Square in Newport, around 1880. Image courtesy of the Providence Public Library. 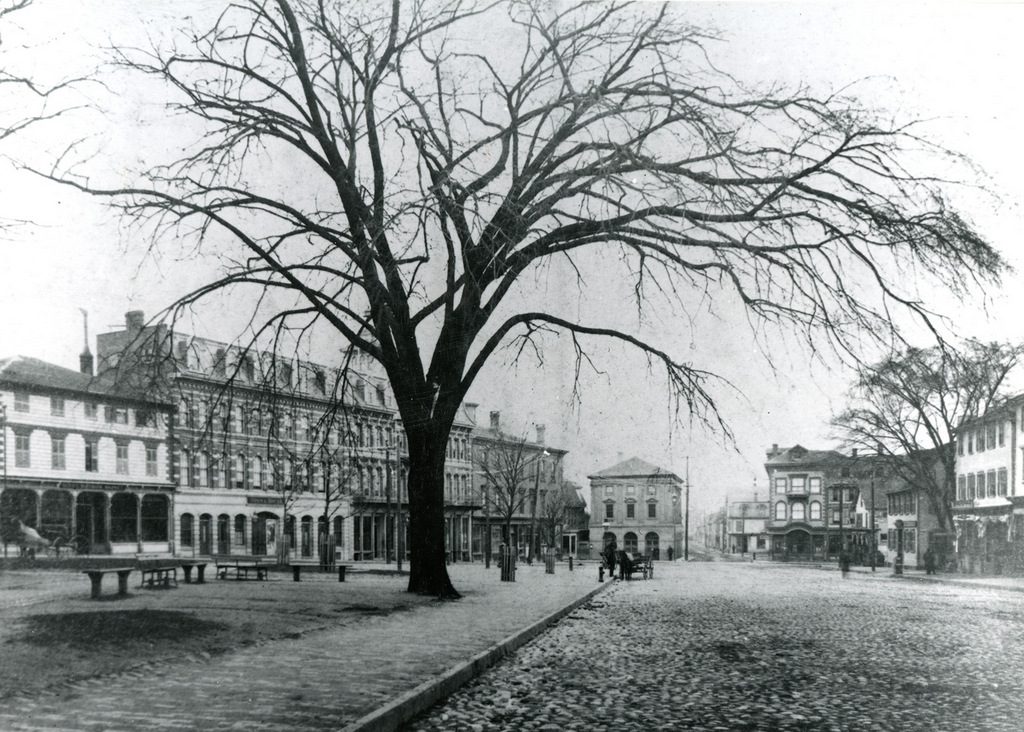 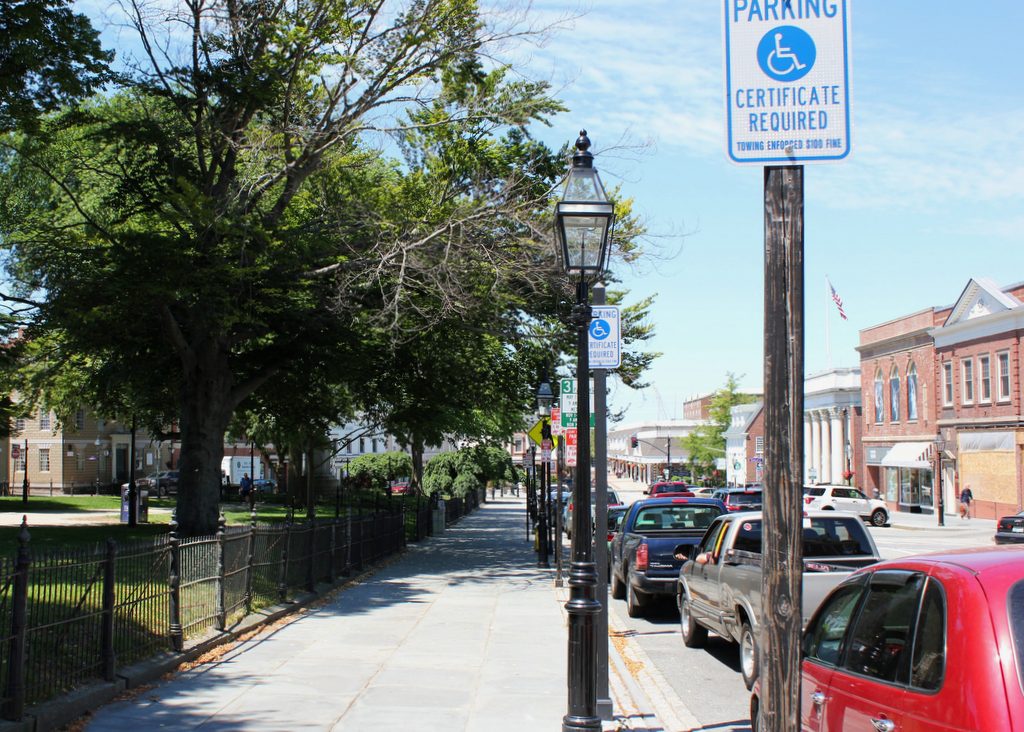 Washington Square has been the main focal point of Newport since its establishment in 1639, when the first settlers built their homes in this area. Over the years, it was variously known as the Mall and the Parade, and by the mid-18th century it was the civic and commercial center of Newport, with the Colony House and the Brick Market located on opposite ends of the square. In a sense, this arrangement was somewhat unusual for New England towns, which typically had a church, as opposed to secular buildings, situated in the most prominent location on the town common. However, here in Newport this reflected colonial Rhode Island’s focus on religious liberty, by not showing preference to one particular church over another.

Around the turn of the 19th century, the area came to be known as Washington Square, and over the next few decades the park was landscaped with trees, fences, walking paths, and a fountain. During this time, the square was the site of many fine mansions, including the one that is seen on the far left side of the photo. Built around 1750 for Peter Buliod, this house was purchased in 1818 by Oliver Hazard Perry, a Rhode Island native who achieved prominence as a naval hero in the War of 1812. He died a year later while serving in the Caribbean, but the house remained in his family until 1865, only about 15 years before the first photo was taken.

By the time the first photo was taken around 1880, modern commercial buildings had come to dominate the square, although some of the old mansions were still standing. Perry’s former house had become a commercial property, with a storefront on the first floor, and on the other side of the photo, further in the distance, was the Rathbun-Gardner-Rivera House, which had been built around 1722 and converted into a bank in 1803. In the center of the photo, the colonial-era Brick Market was still standing, although by this point it had become Newport’s city hall. Directly behind the photographer, the old Colony House was also still standing, and it was still in use as one of Rhode Island’s two state houses, with the state legislature alternating sessions between here and Providence.

Nearly 140 years after the first photo was taken, Washington Square has not undergone any significant changes. Some of the 19th century buildings have come and gone, but overall the area has retained the same scale, with mostly two and three-story commercial buildings surrounding the square. It is hard to tell because of the trees, but most of the buildings on the left side of the scene are still there today. On the far left, the Buliod-Perry House is still there, and was restored to its original appearance in the mid-1970s. Next to it is the Henry Bull Opera House, which was built in 1867 and still stands, although it no longer has its top floor. The Perry House Hotel to the right of it was demolished in the 20th century and replaced with a two-story commercial building, and at the corner of Thames Street the 1861 Henry B. Young Building still stands, although heavily altered and without its top floor.

The 1760s Brick Market is still standing at the western end of Washington Square, and it is now a National Historic Landmark that serves as the Museum of Newport History. Further to the right, the Rathbun-Gardner-Rivera House is still there, partially visible just to the left of the handicapped parking signpost. It is still a bank, having been used as such for over 200 years, but otherwise the right side of the scene is not as well-preserved as the left side. All of the other buildings here on the north side of Washington Square are from the first half of the 20th century, and the ones in this scene date back to around 1929-1931. However, directly behind the spot where this photo was taken, the Colony House is still standing as another one of Newport’s many National Historic Landmarks.

As for the park at the center of Washington Square, it is not much different from when the first photo was taken. The only significant change came in 1885, when a statue was dedicated to Oliver Hazard Perry to celebrate the 100th anniversary of his birth. Located directly opposite his house, it is mostly hidden by trees but still stands on the square. The park itself was renamed Eisenhower Park in 1960, joining Washington and Perry as another military hero whose name would be associated with the square. Eisenhower spent several summers here in Newport during his presidency, and he was present here at the park for the dedication ceremonies in the summer of 1960, during his last year in office. A few years later, in 1968, the park would join the rest of the neighborhood as a contributing property in the Newport Historic District, which is collectively another one of the city’s National Historic Landmarks.