Looking north across the bridge over the North River in Salem, around 1895-1905. Image courtesy of the Boston Public Library. 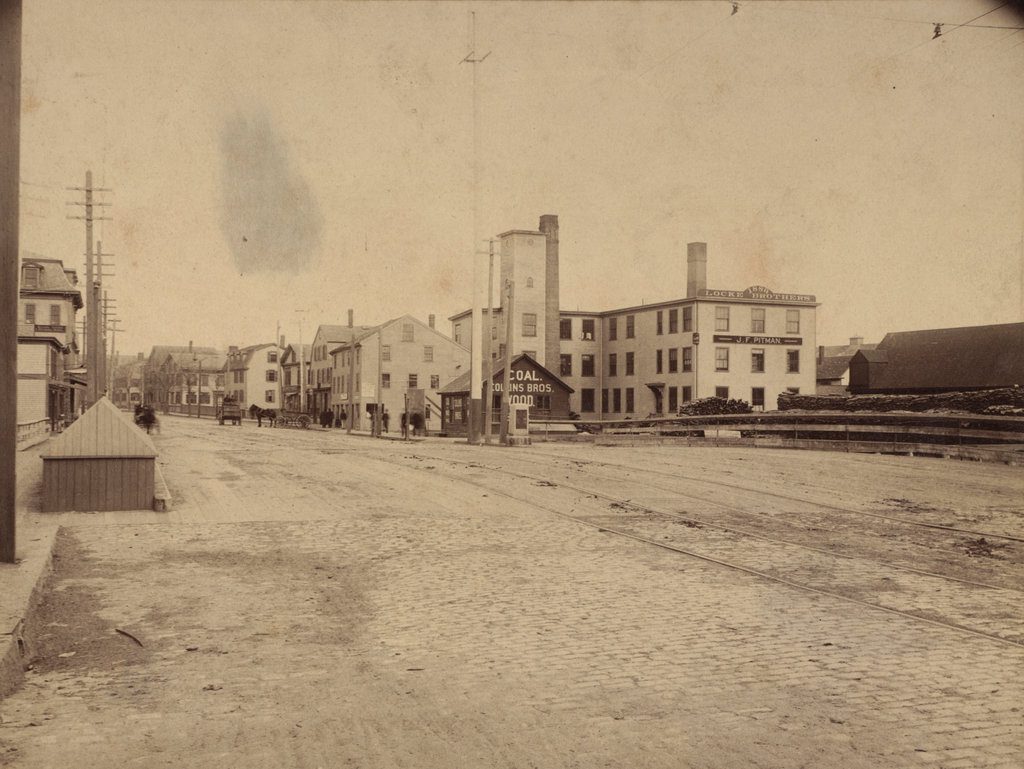 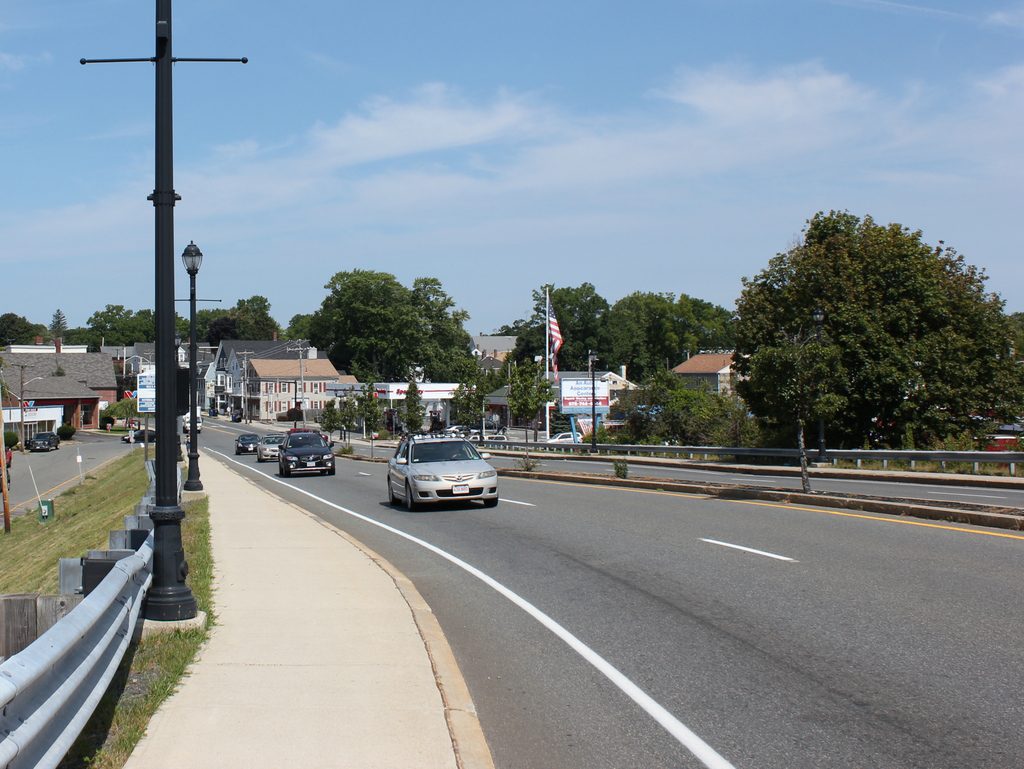 More than a century before the first photo was taken, this scene on North Street in Salem was the site of Leslie’s Retreat, a confrontation that is said to have been the first armed resistance to British rule in the American colonies. The event occurred on February 26, 1775, less than two months before the more famous battles at Lexington and Concord, and was the result of a British effort to seize cannons that were stored in a blacksmith’s shop on the north side of the river.

On that day, some 240 British soldiers, under the command of Lieutenant Colonel Alexander Leslie, landed in Marblehead and subsequently marched through Salem on their way to the North Bridge. However, by the time they arrived at the south side of the river, the town’s militia had already assembled here, and the drawbridge span had been raised to obstruct their path. Colonel Leslie demanded that it be lowered, and even threatened to open fire if it was not, but the militia stood their ground, their ranks swelled by a growing crowd that shouted insults at the British soldiers.

At one point during the long standoff, the British made an attempt to seize several boats in the river. However, the locals noticed this, and began smashing the bottoms of the boats before the British could reach them. During the ensuing struggle, the soldiers threatened the men with bayonets, but one Salem man, Joseph Whicher, opened his shirt and dared them to stab him. One soldier obliged, lightly pricking him in the chest with his bayonet. It was enough to draw blood, making it arguably the first American blood spilled during the Revolution.

As dusk approached, Leslie realized that the situation was hopeless. He finally reached a compromise with the militia, and was allowed to cross the bridge if he agreed to proceed no further than the blacksmith shop. Everyone on both sides knew that the cannons were long gone by this point, having been removed to a more secure location, but the deal allowed Leslie to save face by technically carrying out his orders. He duly performed a cursory search of the blacksmith shop, found no cannons, and then he and his men marched back to their ship in Marblehead, escorted by local militiamen from all of the surrounding towns.

Although little-known today, this confrontation was an important test of American resolve, and also demonstrated the colonists’ ability to summon large numbers of militiamen at short notice. These same factors were present, on a much larger and bloodier scale, less than two months later, when the British made a similar move to seize military supplies in Concord. Coincidentally, the subsequent battle in Concord also occurred at a bridge known as the North Bridge, and it is that one, as opposed to the North Bridge here in Salem, that has been immortalized as “the rude bridge that arched the flood” where the embattled farmer “fired the shot heard round the world.”

By the time the first photo was taken, the scene had changed significantly from its 18th century appearance. Salem was no longer the prosperous seaport that it had been in the years immediately after the American Revolution, and much of this area along the North River had been developed for industrial use. A few of these industries are visible on the right side of the photo, including the Locke Brothers company, which produced steam fittings in the large three-story building near the foreground. In front of this building is a one-story building that housed the offices of the Collins Brothers coal company, and the coal shed is partially visible on the far right side of the photo.

Today, this scene is essentially unrecognizable from the first photo. Not only are most of the 19th century buildings gone, but the road itself has been completely rebuilt. The river, once been an impassable barrier for the British soldiers, is now hardly even noticeable for modern drivers. However, there are several buildings that appear to survive from the first photo, including one that was likely standing during the events of February 26, 1775. Located at 98 North Street, directly opposite Mason Street, this three-story gambrel-roofed house is barely visible in the distance of both photos, at the point where the road curves out of view. It is now heavily modified from its original appearance, with a storefront occupying part of the ground floor, but it was probably built between 1750 and 1770, making it old enough to have been here when the Leslie’s Retreat occurred.