The Hadley Falls Dam and the Carew Manufacturing Company, as seen from the Route 116 bridge over the Connecticut River on the border of Holyoke and South Hadley, in 1936. Image taken by Lewis Hine, courtesy of the U. S. National Archives. 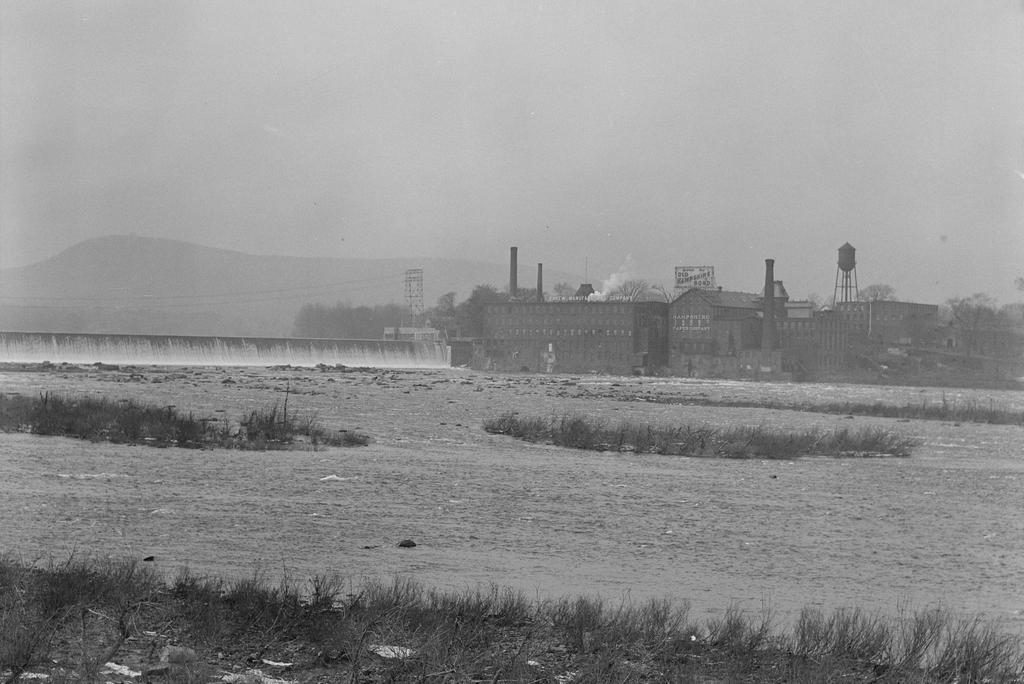 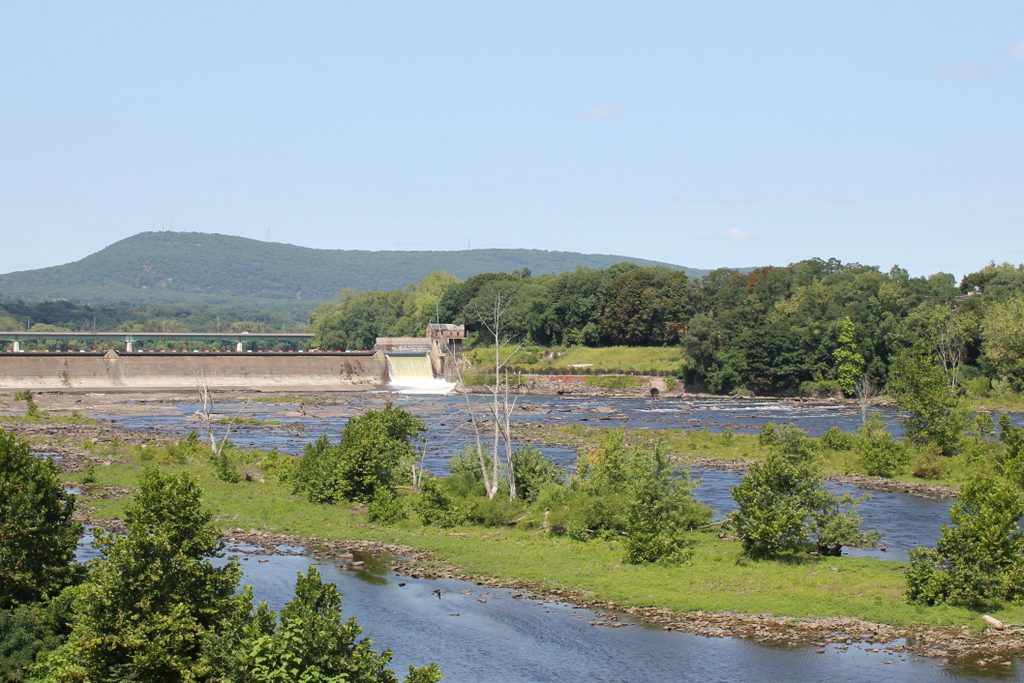 At over 400 miles in length, the Connecticut River is, by far, the longest river in New England, and flows north to south through the region, from the border of Canada all the way to Long Island Sound. It passes over a number of rapids and waterfalls during its course, the largest of which is here on the border of Holyoke and South Hadley, Massachusetts, with a drop of 58 feet. This is also the last major waterfall on the river, and throughout the colonial era it was a major obstacle to river navigation, requiring a costly 2.5-mile portage around the falls.

This problem was partially solved in 1795, when a canal opened on the South Hadley side of the river. It was located on the other side of where the mill buildings stood in the first photo, and it was the first navigable canal in the country, predating longer and more famous ones like the Erie Canal by several decades. However, by the middle of the 19th century, railroads had replaced canals as the most important form of inland transportation, and the South Hadley Canal ultimately closed in 1862.

With the decline of river transportation, along with the rise of industry, this waterfall began to be seen as a major asset, rather than as an obstacle. Industrial development began in the early 19th century, with mills on the South Hadley side, but the most dramatic change to this area came in the the middle of the century. The west side of the river, once a part of West Springfield, was incorporated as Holyoke in 1850, and was developed into a major industrial center. This included the construction of a dam across the river, an extensive power canal system through Holyoke, and a number of large factory complexes.

As a result, Holyoke’s industrial development quickly outpaced that of its older neighbor on the other side of the river. However, South Hadley continued to operate several factories of its own, including two paper mills on the right side of the dam. The one closest to the dam was the Carew Manufacturing Company, and was established in 1848. Its original factory burned in 1873, but it was subsequently replaced by the brick building in the first photo, and produced writing paper for many years. Just to the right of the Carew factory was the Hampshire Paper Company, which was built in the early 1860s and produced the well-known Old Hampshire Bond writing paper.

The first photo was taken in 1936, by prominent photographer and social reformer Lewis Hine. It was in the midst of the Great Depression at the time, and Hine was traveling around the country documenting its effects. He made a visit to Holyoke, where he photographed many of the mills, and he wrote the following caption about this scene:

Mt. Holyoke, Massachusetts – Scenes. The dam: The Connecticut River: the old and famous Hampshire bond manufacturing plant, recently bought by its neighbor, Carew Manufacturing. Also an old and independent mill; founder paternalistic enough to build a church which still stands, enough local feeling to employ from South Hadley because on the Hadley side of the River – Carew Manufacturing Company, 1936

As Hine mentioned in his description, the Hampshire Paper Company closed in 1935, and the property was acquired by the Carew Manufacturing Company. However, the old Hampshire mill was later owned by Stevens Paper Mills, Inc., and it stood here until it was demolished around 1970. In the meantime, the Carew mill was purchased by Texon in 1948, and it produced a variety of goods until it closed in 1986. The property was later sold to Holyoke Gas & Electric, but the historic mill stood vacant for many years before finally being demolished around 2012.

Today, all of the mills from the first photo are gone, but otherwise the scene is still easily recognizable from the first photo. The dam, which was completed in 1900, is still there, and it still provides hydroelectric power for the city of Holyoke. Further in the distance, Mount Tom still forms the backdrop of this scene, although it now features a number of broadcast transmitters atop the 1,202-foot summit. These are hardly visible in the 2017 photo, though, and the only other addition to this scene is the Joseph E. Muller Bridge, which carries U. S. Route 202 across the river just upstream of the dam.