The Hadley Falls Dam on the Connecticut River, on the border of Holyoke and South Hadley, around 1900-1910. Image courtesy of the Library of Congress, Detroit Publishing Company Collection. 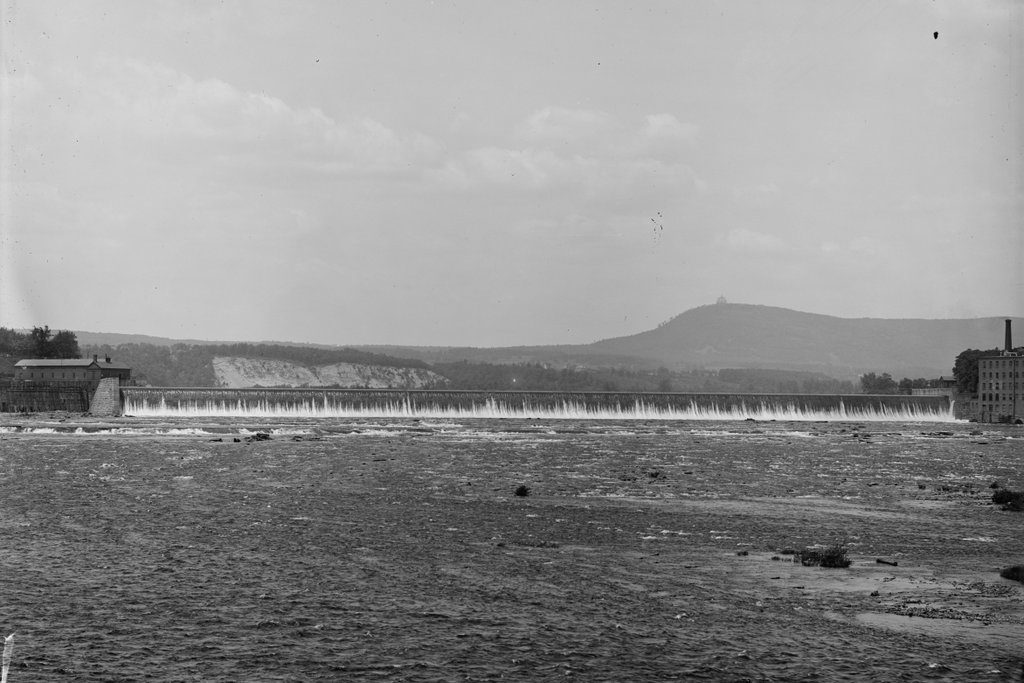 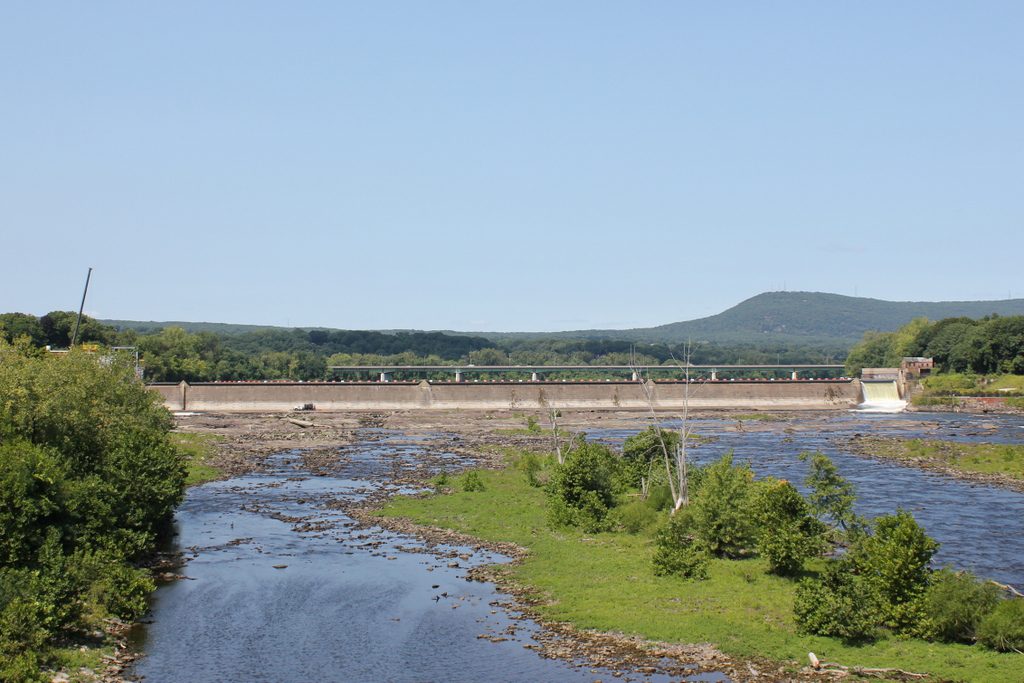 As mentioned in the previous post, Holyoke is the site of the largest waterfall on the Connecticut River, with a drop of 58 feet. This made the location ideal for large-scale industrial development, and during the mid-19th century Holyoke was transformed into a prosperous manufacturing center. The first dam was built here in 1848, but it was poorly constructed, and it failed just hours after the gates were closed. However, a new dam was constructed the following year. It was built of wood, extending 1,017 feet across the river, and was 30 feet tall, with timbers that were firmly anchored four feet deep into the bedrock beneath the river.

This second dam proved far more durable than its short-lived predecessor, and it remained in use for the rest of the 19th century. However, by the early 1890s there was a need for a new dam, this time built of stone. Construction began in 1892, with the new dam being located 150 feet downstream of the old one. It took three years just to excavate the bottom of the river, and the work involved the removal of some 13,000 cubic yards of bedrock. Construction of the dam itself began around 1896, and it was comprised of a combination of rubble stone taken from the riverbed downstream of the dam, along with quarried granite blocks from Vinalhaven, Maine. The work was done in several different stages, as described in a 1900 article in the Journal of the Association of Engineering Societies:

The dam was constructed in four sections, the south end and a center section just north of the drain channel being built up for a considerable height first. Then a coffer dam was built on the first level of the north channel, thus turning the water through the center channel, while a section of dam 5 feet high was constructed behind it. The coffer was then transferred to the center channel, and a section 10 feet high built in that opening. In this way the alternate sections were built in until the structure was complete. The cost of the entire work is said to have been between $600,000 and $700,000.

Upon completion in 1900, the dam measured 1,020 feet across the river, and is said to have been the longest dam in the world at the time. The first photo was taken sometime soon after its completion, and shows water pouring over the top of the dam. On the far right is part of the Carew Manufacturing Company, a paper mill that was located on the South Hadley side of the dam, and in the distance on the right side is Mount Tom, with the Summit House prominently visible atop the 1,202-foot traprock mountain.

Today, more than a century after the first photo was taken, both the Carew factory and the Summit House are gone. However, the dam itself is still here, after having survived a number of major floods during the 20th century. Holyoke is no longer the major industrial city that it once was, but the dam and the canal system are still used to generate power. Both are now operated by the city-owned Holyoke Gas & Electric, with the hydroelectric generators here at the dam provide a significant portion of Holyoke’s electricity.