Looking north on Broadway from the corner of Farewell Street in Newport, around 1884. Image courtesy of the Providence Public Library. 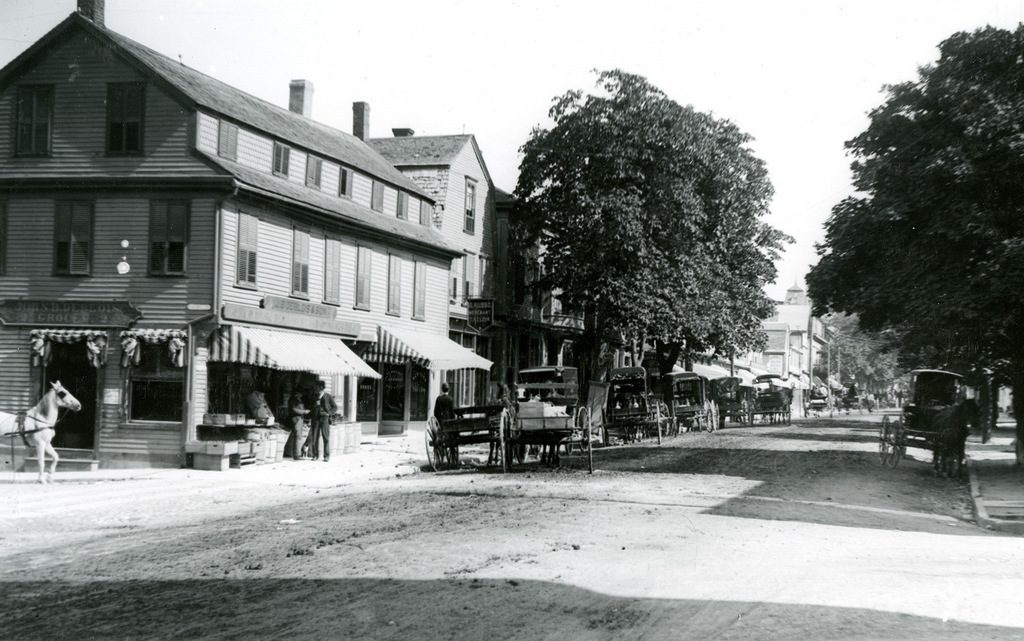 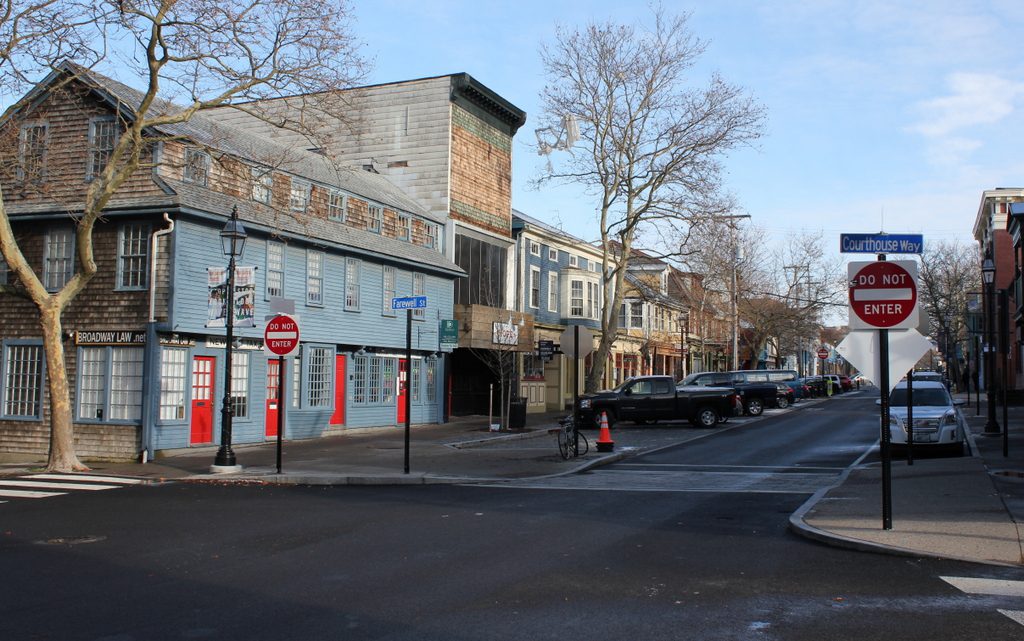 This view shows the west side of Broadway, looking north from the Colony House at the corner of Farewell Street and Courthouse Way. Although taken more than 130 years apart, not much has changed in these two photos. Like much of downtown Newport, this area has remained remarkably well-preserved since the colonial era, and both photos show an eclectic mix of historic buildings that date as far back as the 17th century.

Perhaps the oldest building in this scene is the one on the far left, at 2-6 Broadway. It was built sometime before 1700, and was once owned by Peleg Sanford (1639-1701), who served as the colonial governor of Rhode Island from 1680 to 1683. Sanford came from a leading Rhode Island family, with his father, John Sanford (c.1605-1653), having briefly served as governor of Newport and Portsmouth in 1653. However, his most notable relative was his grandmother, Anne Hutchinson (1591-1643), the famed religious dissenter whose 1638 banishment from Boston had helped lead to the establishment of Newport.

Peleg Sanford died in 1701, and the house was later owned by his son-in-law, Job Almy, who purchased the property in 1723. The house would remain in the Almy family for over a century, until it was sold in 1827. By this point, the first floor of the house had been converted into a storefront, and the building would see even more drastic changes around 1845, when it was enlarged to its present size. This addition concealed most of its original appearance, although the building retained its overhanging second floor, which was a distinctive feature of many 17th century homes.

By the time time the first photo was taken around 1884, the building was occupied by several commercial tenants, including J. B. Deblois & Son, whose grocery store was located in the corner storefront. In later years, the ground floor was occupied by Lalli’s, a variety store that was in business here from 1923 until 1986. It was during this time that, in 1976, the exterior of the building was restored, giving it more of a 17th century appearance. Today, despite all of these changes, the structure of the original house is still there, making it possibly one of the oldest surviving buildings in Newport.

Aside from the Peleg Sanford House, there are a number of other historic buildings in this scene. Immediately to the right of it is the William P. Shefield House, which was built around 1850, although its exterior has been altered beyond recognition since the first photo was taken. Next, in the center of the scene, is the William H. Stanhope House, at 12-18 Broadway. It was built around 1815 as a private home, and its Federal-style architecture is still recognizable today, despite having been converted to commercial use during the 19th century. Further in the distance, barely visible in the 2017 photo, are two late 18th century homes at 20-24 and 26-30 1/2 Broadway, both of which are also now commercial properties.

Today, the vehicles on the street have changed, and this block of Broadway is now a one way street for southbound traffic, but otherwise the buildings themselves have seen few changes. All of them are now contributing properties in the Newport Historic District, which encompasses much of downtown Newport. The district was designated as a National Historic Landmark in 1968, because of the survival of so many historic buildings from the 17th, 18th, and 19th centuries.