The Perry Mill, seen from the corner of Thames and Cannon Streets in Newport, around 1914-1916. Image courtesy of the Providence Public Library. 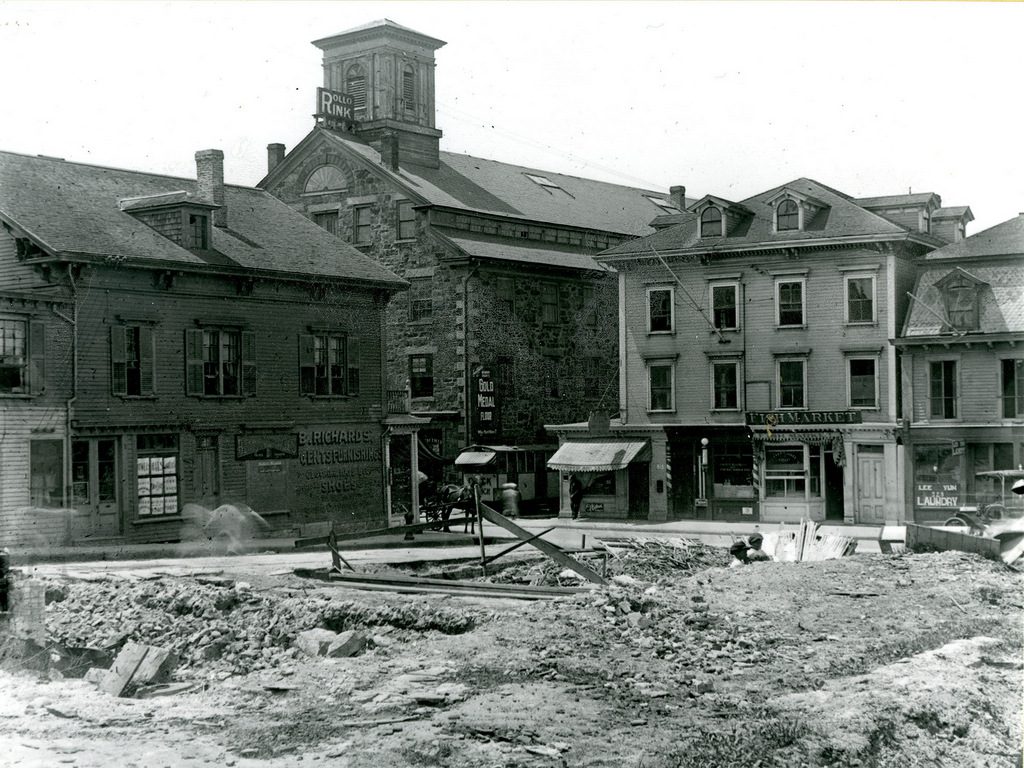 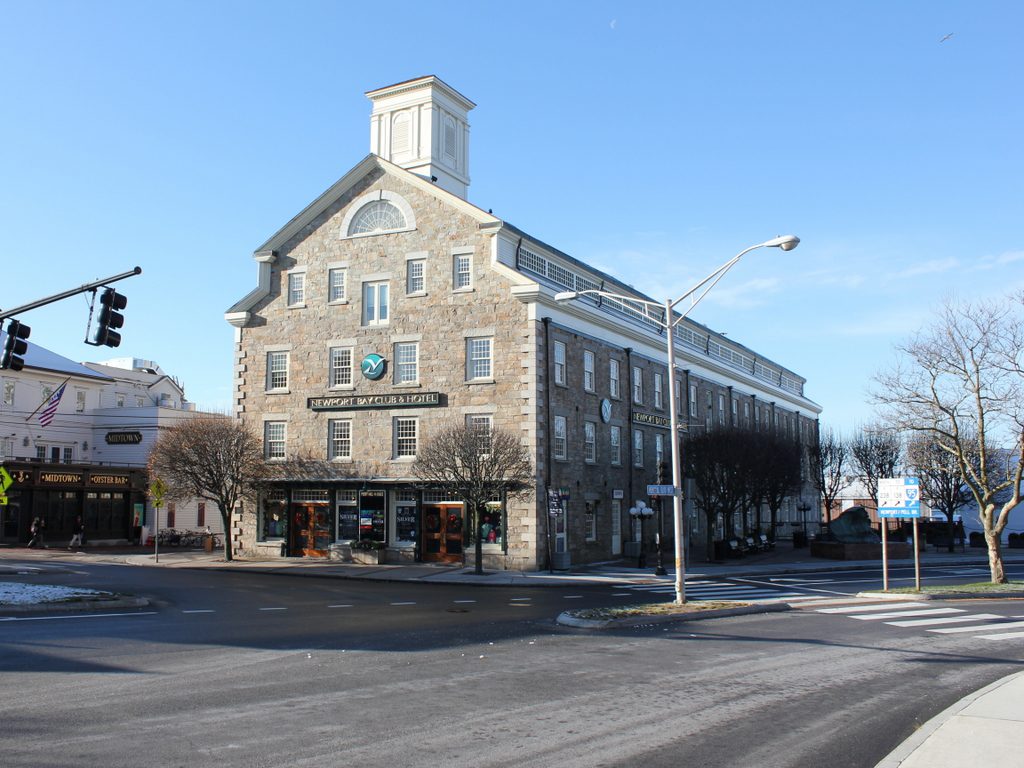 The first photo was taken sometime in the mid-1910s, during the construction of the present-day Newport Post Office. It shows a group of commercial buildings, most of which were probably built around the mid-19th century, and the signs advertise for a variety of businesses, including B. Richards Gents Furnishings in the building to the left, and a fish market and Lee Yun Laundry in the buildings to the right. There also appears to be a barber shop in the storefront just to the left of the fish market, as indicated by the striped poles on the exterior.

However, the most prominent building in the first photo is the Perry Mill, which stands diagonally across the intersection in the center of both photos. It was built in 1835 as a textile mill, at a time when Newport had been experiencing several decades of economic stagnation. The city’s once-prosperous shipping industry had been badly hurt by the American Revolution, and never fully recovered. By the early 19th century, much of New England’s economy had shifted from trade to industry, and inland manufacturing centers had begun to eclipse colonial-era seaports such as Portsmouth, Salem, and Newport.

Architecturally, the Perry Mill was very different from most other New England mills of this period. Instead of a brick exterior, it was built of stone, and featured details such as lintels over the windows, quoins on the corners, and a fanlight just underneath the gable. It was the work of Scottish-born stonemason Alexander MacGregor, and was one of the few major building projects in Newport during this period. However, despite hopes that the mill would revive the city’s economy, Newport never became a major industrial center. Its location on an island, which had benefitted its merchant fleets, proved a liability in the age of railroads, and Newport would not see widespread prosperity until the second half of the 19th century, when the city reinvented itself into one of the country’s most exclusive summer resort communities.

The mill was still standing in its original appearance when the first photo was taken, but at some point in the 20th century it was heavily altered with the removal of the gabled roof and fourth floor. From 1943 to 1984, the building was owned by General Electric, but it was subsequently converted into retail space, and now houses shops and restaurants. As part of this renovation, the upper part of the building was reconstructed, and the only noticeable evidence of this change is the slightly lighter-colored stone above the third floor.

Today, the Perry Mill stands alone in this scene, with none of the other buildings surviving from the first photo. The post office, which was barely under construction when the first photo was taken, is still there, but the rest of the area has dramatically changed. In the mid-20th century, the four-lane America’s Cup Avenue was built along the waterfront of Newport, running along the west side of Thames Street for part of its route. This meant that many Thames Street buildings had to be demolished, including the ones on the right side of the first photo. However, just before reaching the Perry Mill, America’s Cup Avenue makes a sharp left turn, becoming Memorial Boulevard West. This was constructed around the same time, and involved demolishing all of the buildings on the south side of Cannon Street, including the one on the left side of the photo. As a result, the Perry Mill was spared by these projects, and it remains a prominent landmark along Newport’s waterfront.