Osborn Hall, at the northwest corner of College and Chapel Streets on the campus of Yale University in New Haven, around 1901. Image taken by William Henry Jackson, courtesy of the Library of Congress, Detroit Publishing Company Collection. 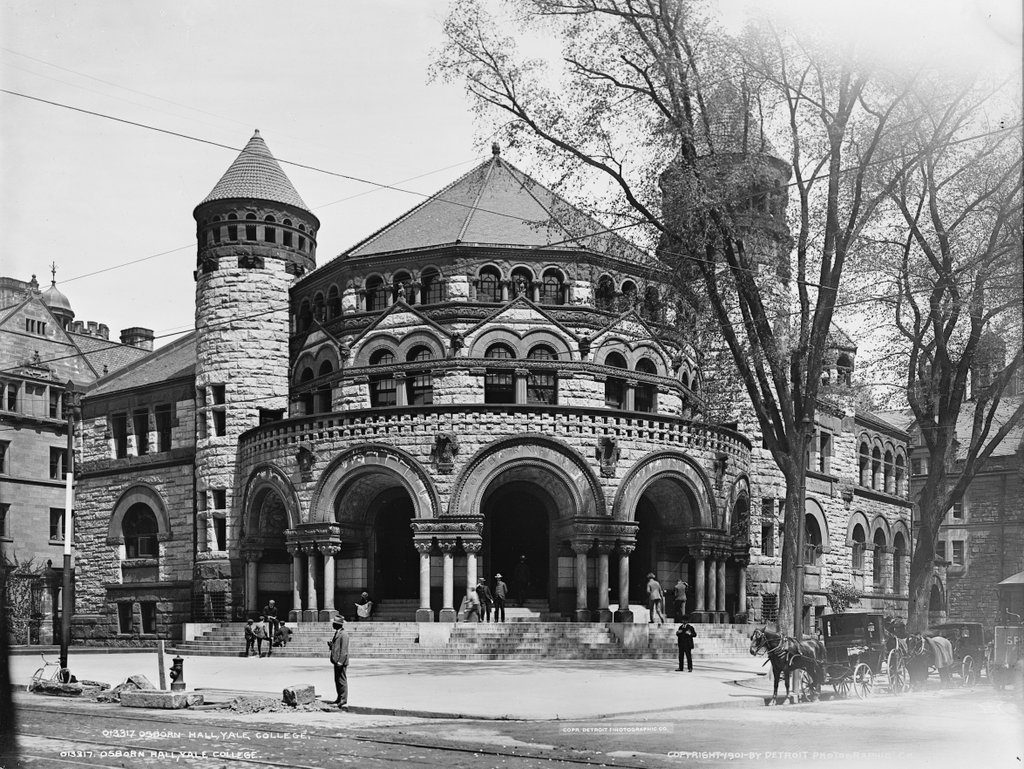 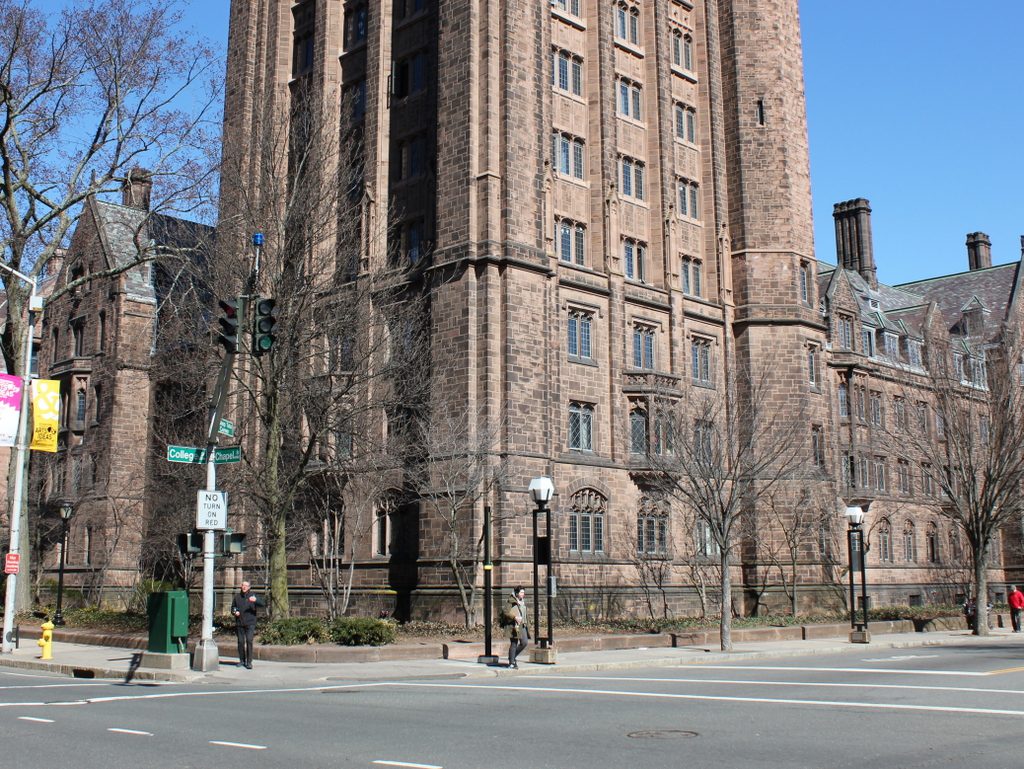 This site, at the corner of College and Chapel Streets, was the location of the first building on Yale’s New Haven campus. Established in 1701 as the Collegiate School, it was originally in modern-day Clinton, Connecticut, and it moved several times before eventually coming to New Haven in 1716, where it was subsequently renamed Yale College. The first building, known as the College House, was completed here in 1718. It was the only building on campus during its early years, and it stood here until its demolition in the late 18th century.

By the 1830s, the perimeter of the Yale campus was marked by a rail fence that ran along the streets. Aside from serving as both a literal and symbolic boundary between Yale and the rest of New Haven, the fence also became a popular spot for socializing, where up to several hundred students could be found seated on the rails at any given time. At the time, the fence encircled the Old Brick Row, a collection of late 18th and early 19th century buildings that were set back from the streets. By the late 19th century, though, the school had adopted a new campus plan, consisting of new buildings on the edges of the streets, with a quadrangle where the Old Brick Row had once stood.

As a result, the old fence was steadily replaced by these new buildings, which were constructed over a period of several decades. The last surviving section of the fence was here on this corner, and it remained a popular gathering place into the 1880s. However, this busy intersection was too prominent a space to have occupied by just a rustic rail fence, especially when the school was in the midst of dramatically transforming its appearance. The fence was ultimately removed in 1888, in order to make room for Osborn Hall, which was built on the site.

Osborn Hall was a gift of Miriam Osborn, who gave $150,000 to construct a recitation hall in memory of her husband, Charles J. Osborn. The building was designed by prominent architect Bruce Price, whose subsequent works include the adjacent Welch Hall, and its exterior was an excellent example of Romanesque-style architecture. Even Yale’s rival school praised the design, with the Harvard Crimson declaring, shortly before its completion, that “when finished will be one of the finest buildings belonging to the college, as well as the best equipped building of the kind in the country,” and that “In every way the building is to be as near perfection as it can possible be made.”

The building was largely completed by the end of 1889, and was formally dedicated on January 7, 1890, with college president Timothy Dwight V delivering the keynote address. However, despite its architectural grandeur, the construction of Osborn Hall was highly controversial, especially since it replaced the humble yet much-beloved rail fence. Among the many critics was Isham Henderson, who wrote about it less than a decade later in the February 1899 issue of the Yale Literary Magazine. He viewed the loss of the fence as a sign of the times, epitomizing the Gilded Age emphasis on money, progress, and ostentation. Henderson believed that tradition, such as fence sitting, was more important than a grand new building, writing:

It is by these class customs that college spirit is fostered, and it is in them that a large part of the college training, by many considered larger and more valuable than all the curriculum of the recitation room is acquired. . . . Osborn Hall set a precedent for displacing the old Yale for the new. . . . It lies with the next president to decide whether internal arrangement is to be sacrificed to external show, whether traditions and customs and ‘spirit’ are to go down before the demand for luxuries – or whether the old Yale is to be made into the new by rearranging the interior instead of decorating the exterior, and the old spirit preserved in defiance of wealth and aristocracy.

Regardless of nostalgia for tradition, though, Osborn Hall proved to be further from perfection than the Crimson had predicted. Its location at a busy intersection made it a prominent landmark on the Yale campus, yet this same intersection also made it difficult to hold classes here, because of the unceasing traffic noise just outside the windows. As the first photo shows, this included pedestrians, horse-drawn carriages, and trolleys, and within a few years automobiles would also be added into this mix. This problem was mentioned in the 1915 Reports of the President and Secretary of Yale University, which noted:

There are numerous requests from members of the Faculty for better recitation rooms. Osborn Hall grows more and more unpopular and this building is used under protest. During the year the route of the Winchester Avenue cars has been changed, and this heavy traffic now passes along College Street directly beneath the windows of Osborn, rendering it almost useless for lecture purposes. In order to meet the very reasonable requests of the instructors assigned to these noisy recitation rooms, a large hall on the second floor of the University building on High Street is being fitted up for lecture purposes and will be used for certain classes now held in Osborn Hall.

Osborn Hall was ultimately demolished in 1926, just 36 years after its completion. Its much larger replacement was Bingham Hall, an eight-story dormitory that was named in honor of Cleveland businessman, philanthropist, and Yale graduate Charles W. Bingham, whose children provided funds to construct it. The new building was completed in 1928, with a Gothic-style exterior that blended in with the rest of the campus much better than the Romanesque-style Osborn Hall had managed to do. Bingham Hall is still standing today, as are the neighboring Vanderbilt and Welch Halls, which are barely visible on the far left and far right sides of the first photo.