The east front of the United States Capitol, during the inauguration of Abraham Lincoln on March 4, 1861. Image courtesy of the Library of Congress. 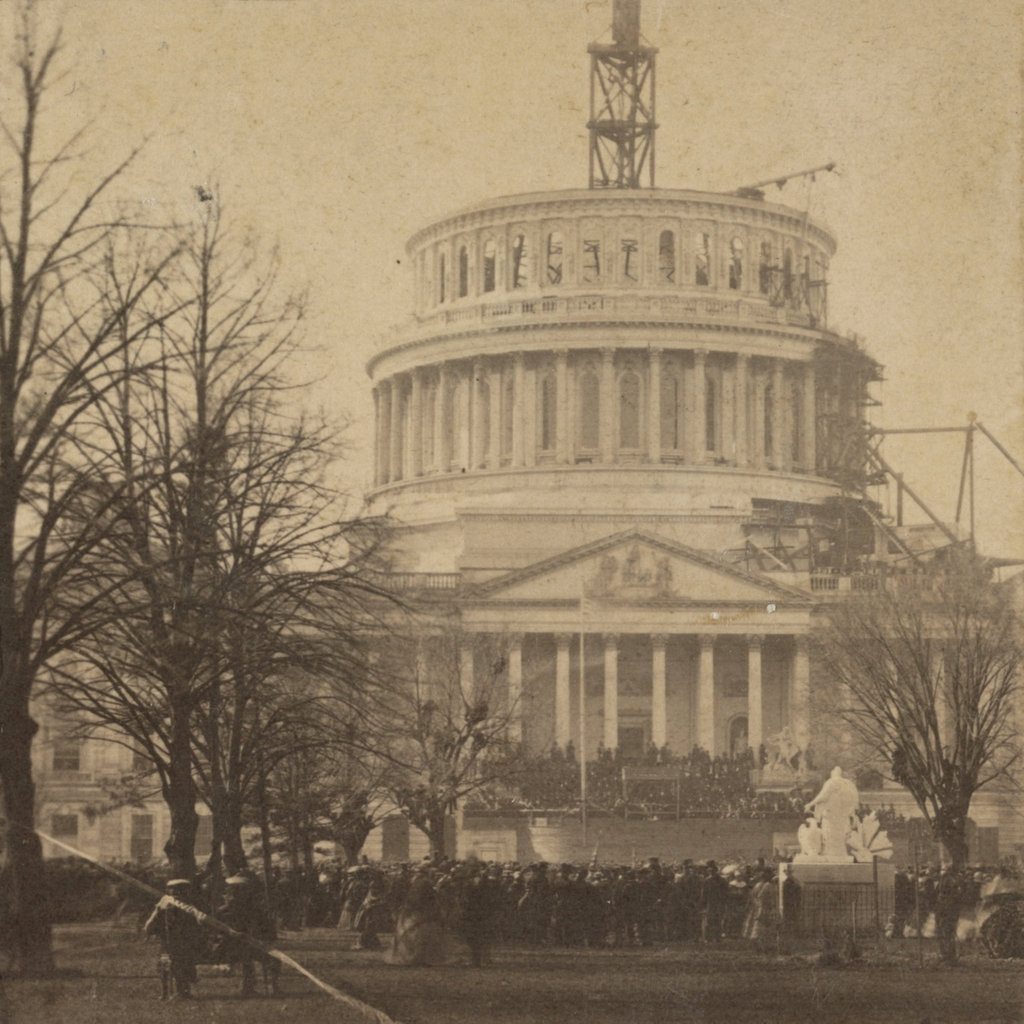 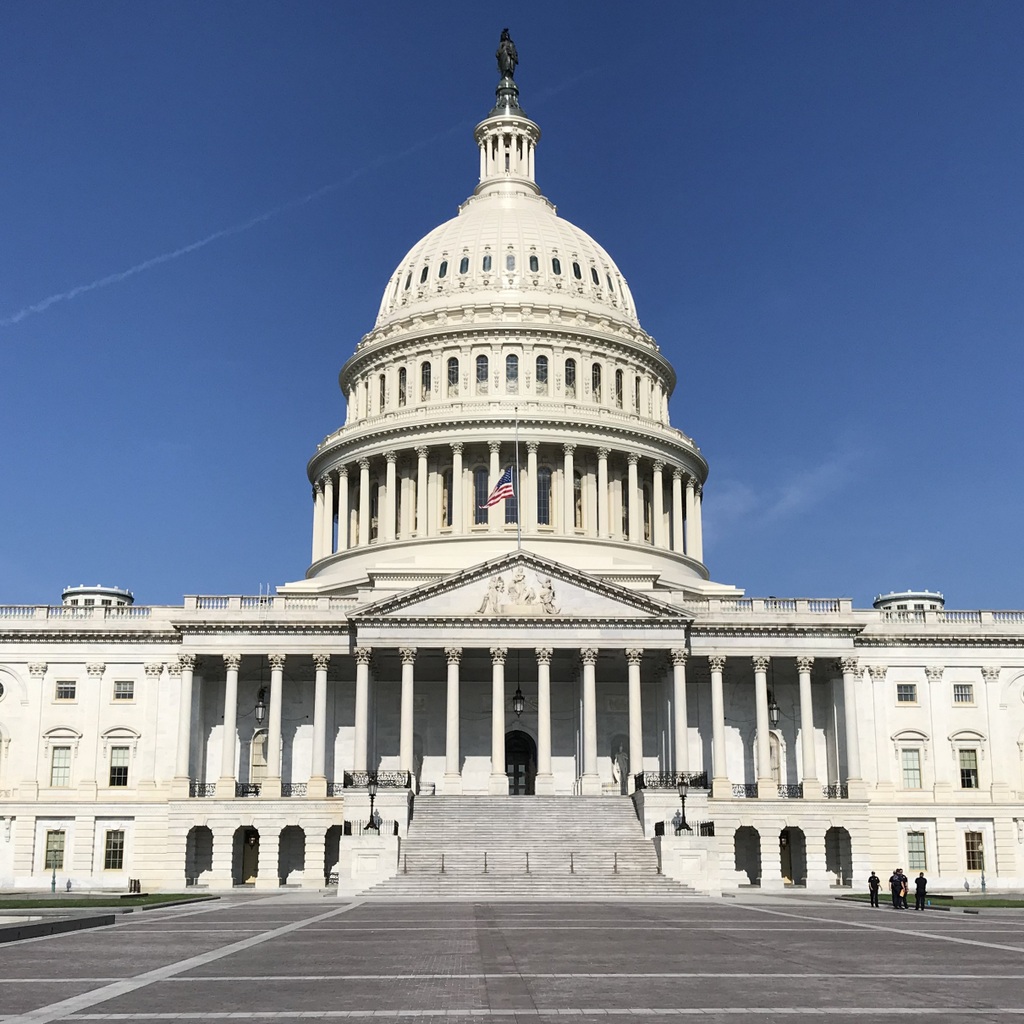 The first photo was taken around the same time as the one in a previous post, but this one shows the view from further back, with the entire unfinished Capitol dome in view, along with the crowd that had assembled for Lincoln’s first inauguration. It was the culmination of the highly-contentious 1860 presidential election, which saw the splintering of the Democratic Party into regional factions. Lincoln won the four-way race amid threats of secession from the south, and by the time he was inaugurated on March 4, 1861, seven southern states had followed through on their plans.

Because of this, there was a great deal of uncertainty on the day that the first photograph was taken. The start of the Civil War was just over a month away, and there were still plenty of questions about whether the South would be allowed to peacefully secede, or if the newly-inaugurated president would send an army to stop them. Appropriately enough, the backdrop to this event is the unfinished dome of the Capitol. Begun six years earlier, this new dome was still very much a work in progress during Lincoln’s inauguration, and it seemingly represented the as yet unfinished work of uniting the northern and southern regions of the nation.

The Capitol building itself is actually significantly older than this dome, though. Construction began in 1793, and the Senate and House wings were completed in 1800 and 1811, respectively. However, the building was burned in 1814, during the War of 1812, and its reconstruction was not ultimately finished until 1826. At the time, the building was topped by a low dome, which is visible in the first photo of another previous post. As the country grew, though, so did the Capitol building, and two new wings were added in the 1850s. As a result, the old dome looked out of proportion to the old building, so construction began on the current one in 1855.

During the early 19th century, the Capitol became the primary site of presidential inaugurations. At first, these ceremonies were held indoors, in either the Senate of House chambers, but in 1829 Andrew Jackson became the first president to be inaugurated here on the East Portico. This started a tradition that, with few exceptions, continued into the late 20th century. Jimmy Carter’s 1977 inauguration was the last to be held here on the East Portico, and since 1981 the ceremony has – with the exception of Ronald Reagan’s 1985 inauguration in the Rotunda – been held on the West Portico, on the side of the building facing the National Mall and the Washington Monument.

Four years to the day after the first photo was taken, Lincoln’s second inauguration would also be held here on the East Portico. By then, the exterior of the dome had been completed, and Lincoln’s goal of reuniting the nation had likewise been largely accomplished, with the end of the Civil War only weeks away. However, less than a week after Lee’s surrender, and only 42 days into his second term, Lincoln was assassinated by John Wilkes Booth, who had actually attended the second inauguration here, and had later claimed that he could have killed Lincoln during the event if he had wanted to.

Today, more than 150 years after the first photo was taken, the East Portico does not appear to have changed much. However, it actually underwent a major expansion starting in 1958, when a new portico was built 32 feet 6 inches in front of the old one. Aside from being built of marble, as opposed to the sandstone of the original walls, this new portico was essentially a duplicate. The old walls remain intact inside the building, although the original columns were removed and now stand in the National Arboretum. The 1958 renovations also involved the removal of two statues that once flanked the east steps. On the left, mostly hidden from view in the first photo, was Luigi Persico’s Discovery of America, and on the right was Horatio Greenough’s The Rescue. Both of these statues featured particularly unflattering depictions of Native Americans, and neither have been put on public display since then.

The other significant addition to this part of the Capitol occurred in the early 2000s, when the Capitol Visitor Center was constructed here. Consisting of 580,000 square feet of floor space on three floors, this massive expansion is almost entirely hidden from view in this scene, as it is located directly under the plaza in front of the East Portico. From this angle, the only visible signs of this underground complex are several skylights, including one on the far left side of the scene.